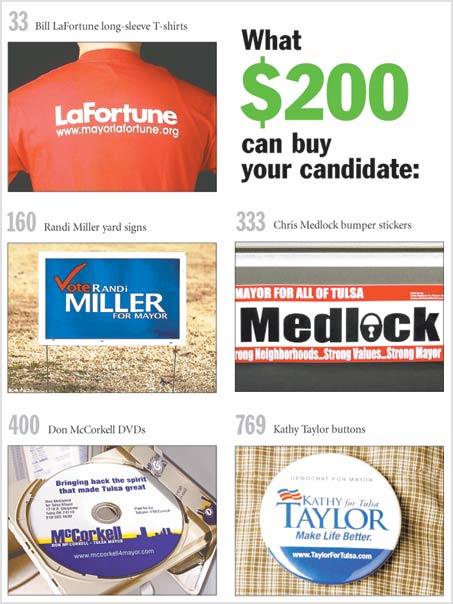 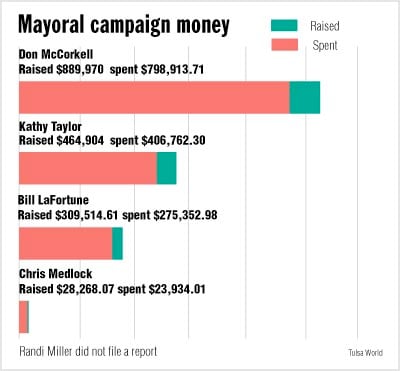 Mayoral hopeful Don McCorkell's personal contributions put him far ahead of the pack in money for advertising.

Tulsa's mayoral race has unleashed probably the most expensive campaign in the city's history.

McCorkell's personal contribution is nearly twice the amount raised by his Democratic opponent Kathy Taylor. It is almost $90,000 more than the total amount of contributions raised by Taylor and Republican candidates Bill LaFortune, the incumbent, and Chris Medlock. The mayor's salary is $105,000 annually.

McCorkell said he has made a lot of money and that his family decided to contribute to the community. At the same time, however, he was being asked to run for mayor.

"Well, I thought that I can contribute several hundred thousands of dollars towards some building and put my name on it, or I could put it in the mayor's race and run for those people who can't make big contributions," he said.

McCorkell said he could lose, "but if we win we could make a heck of a lot more difference than just having a plaque on the side of the building somewhere."

"This is the one time in history when someone can really run and represent the working people and afford to do it," he said.

Only 21 individual donors contributed more than $200 to McCorkell's campaign. Any contribution of $200 or less does not have to be itemized.

More than 230 individual donors contributed more than $200 to help her build her war chest.

"What I think my report means to Tulsa is that I have support from all corners of the city, all walks of life who believe I can move this city forward," she said.

Taylor said that if someone is going to lead this city, "you can't just run a race to win, but you have to run a race that has a broad spectrum of people behind you to support you in your execution of your plan. You're not a leader if nobody is following."

In LaFortune's last mayoral campaign -- in 2002 -- he had raised $417,912 by March. At that time it was more than double what former Mayor Susan Savage had taken in during the same recording period in her 1998 mayoral contest.

Medlock said he was running his campaign the way he would run the city: "We get more out of less."

"We're catching up and gaining and feel confident of winning the primary, and we're doing it through good old-fashioned grass-roots," he said.

When asked about the amount in McCorkell's campaign chest, he said: "I thought golf was an expensive hobby."

Republican candidate Randi Miller had not filed a contributions list at the City Clerk's Office by Monday's 5 p.m. deadline. She could not be reached for comment.

The reports cover the campaign period ending Feb. 20. Reports are not required in cases where a candidate raises or spends less than $500.

State Ethics Commission Executive Director Marilyn Hughes said failure to file a required report on time is a misdemeanor, punishable by a fine of as much as $1,000 or as long as six months in jail.

Enforcement of ethic laws related to municipal elections is up to district attorneys, she said.

Former Tulsa County Democratic Party Chairwoman Elaine Dodd said she thinks this election is an anomaly with two "Democratic candidates with extraordinary personal wealth that have filed for mayor in the same primary."

Tulsa County Republican Party Chairman Jerry Buchanan said that "what we have here are some millionaire elitists from the Democratic Party that are quite obviously trying to buy their way into the Mayor's Office."

"What we're seeing here is a desperate attempt to take control of City Hall by the Democrats, and they're willing to spend anything that needs to be done to get that accomplished," he said.

Buchanan and Dodd agreed that the issue of campaign financing should be examined.

Dodd said a mechanism is needed to ensure that people don't have to self-fund their campaigns or rely heavily on others, "if we are truly interested in having the playing field level for all persons."

Buchanan said this type of high-dollar campaign stifles individuals who have a passion to run but don't have checkbooks to back that up.

"It keeps good qualified people from running against the deep-pockets," he said.

In City Council District 9, Republican candidates Jeff Stava and Cason Carter lead in contributions. Carter has reported raising $39,910, and Stava has $40,075. Both have spent roughly $15,000.

The rest of the council candidates have raised less than $20,000.

Republican Rick Brinkley has raised $9,125 and spent $2,862.69. He reported $3,625 worth of contributions $200 or less. Among his other donors were Donald Burdick, Rob Hart, Connie Entwistle, Debbie Kendall and Donna Weinkauf, who each gave $500; and Kathryn Richards, John Gaebel and Charles Howard, who each gave $1,000.

Republican incumbent Bill Martinson has raised $11,049.92 and spent nothing. He reported $1,200 worth of contributions $200 or less and a carryover balance of $149.92 from his previous campaign.

Republican Theresa Buchert has raised $18,059.31 and has spent $8,373.31. She reported $6,109.31 worth of contributions $200 or less. Among her other donors were Patty Eaton, Robert Smith and Ken Shoemaker, who each gave $250; Peter Buchert, Velvetta Madden, Jeana Madden, Mark McGuire and Tom McGuire, who each gave $500; Robert Poe, who gave $700; and Muriel R. Buchert, Patrick Guest, John A. Brock, George Kaiser, BOK Financial Corporation PAC, Virginia Allen, Tommy Thompson and the Realtors PAC; who each gave $1,000.

Republican incumbent Bill Christiansen has raised $15,838.24 and spent $5,000. He reported $3,260 worth of contributions $200 or less and a carryover balance of $69.88 from his previous campaign. Among his other donors were John D. Benjamin, Rich Blase, Faye Hutcherson, the Forest Meadows Homeowners Association, and Glen and Jeannine Terry, who each gave $250; Michael T. Peyton, George and Rachel Gibbs, Louis and Sharon Jensen, Ronald E. Davis and Rick Hudson, who each gave $500; Robert C. Poe, who gave $800; Michael and Carla Covey, who gave $958.36; and John and Deborah Hale, Marcia and Ron Macleod, BOK Financial Corporation PAC, John A. Brock, and George B. Kaiser, who each gave $1,000; and Laurie Ross, who gave $2,000.

Democrat incumbent Phil Wood has raised $13,568 and spent $722.49 He reported $4,918 worth of contributions $200 or less. Among his other donors were Fred Dorwart, James E. Frasier, Ellen Hartman, Tex Hartman, George Schnetzer and Mary Lhevine, Gary and Linda Watts, and Charles V. Wheeler, who each gave $250; Charles and Jeanne Froeb, who gave $400; Steve Berlin, Robert D. Magers, Ruth Nelson, Kathy Taylor, Hugh Watson and Jack and Maxine Zarrow, who each gave $500; E.L. Weeks, who gave $1,000; and George and Edwynne Krumme, who gave $2,500.