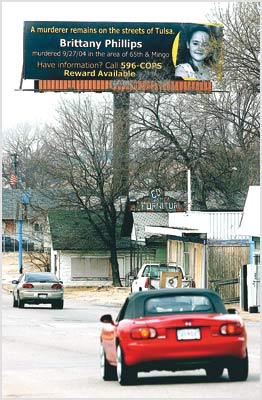 This billboard offering a reward for information that will lead police to the killer of 18-year-old Tulsa Community College student Brittany Phillips in 2004 was posted Thursday near Interstate 244 and Utica Avenue. 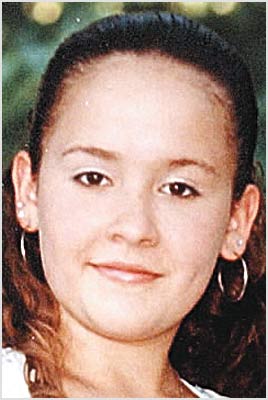 This billboard offering a reward for information that will lead police to the killer of 18-year-old Tulsa Community College student Brittany Phillips in 2004 was posted Thursday near Interstate 244 and Utica Avenue.

She wants the billboard to keep attention focused on finding whoever killed her daughter in September 2004.

The hopes of a grieving mother are hanging on a billboard at Interstate 244 and Utica Avenue.

Maggie Zingman's daughter, 18-year-old Brittany Phillips, was raped and strangled in September 2004. The case remains unsolved, but Zingman's tireless efforts to find the killer have led to the placement of a billboard Thursday to seek leads in the investigation.

She said there's a surge in tips whenever her daughter's case is featured in a local newspaper article or televised reports.

"It always seems to remind people, but then the tips die off. In a major traffic area, this billboard will be seen every day," Zingman said. "This way she gets more continual exposure.

"It is so easy to forget. People don't want to remember a young woman who was killed," she said. "People want to put it out of their minds."

Phillips was found dead Sept. 30, 2004, in her Glen Eagles apartment at 9416 E. 65th St. Police believe that the Tulsa Community College student had been dead for several days.

Despite multiple search warrants and interviews by detectives, no one has been arrested in the assault.

Zingman saw a national news story about Lamar Outdoor Advertising using a billboard to seek leads in an unsolved homicide in another city.

She contacted the company's corporate headquarters and was put in touch with Pat Selcer, the company's general manager for the Tulsa market.

"I sent them my daughter's story and told them about my frustrations, and I said that I knew about the good work that they do," Zingman said.

Lamar Outdoor Advertising agreed to donate the space and the billboard's design, she said.

Selcer said Lamar Advertising intends to keep the billboard posted in Tulsa until good leads are received in the case or until at least 12 months have passed. The company will move the sign to different locations around the city every three to four months to maximize the potential number of viewers.

The company has one other billboard about another unsolved homicide in Tulsa, but it has erected many other signs in other locations.

"Living in this community, we want to do the most we can do to help," Selcer said. "We have found the billboards to be effective ways to help the community as well as the police officers in the community."

Detective Jeff Felton, a homicide investigator, said officers are still actively investigating the case. He continues to work with the Burglary Unit and the Sex Crimes Unit to generate leads.

"I am really hopeful that someone will see the billboard and will know something and come forward," Felton said.

In August 2005, a national foundation created by the families of murder victims posted a $5,000 reward to help catch Phillips' killer.

The Carole Sund/Carrington Memorial Reward Foundation offered the money at Zingman's request. The reward was for only six months, so it was set to expire this month, but Zingman recently asked for an extension because the billboard was being posted to seek new tips.

Carole and Juli Sund and Silvina Pelosso were sightseers who were reported missing before they were found slain near Yosemite National Park in February 1999. Carole Sund's parents, Francis and Carole Carrington, created the foundation to help safely return missing people to their homes and to bring about the arrest and conviction of violent criminals.

The foundation requires that a case meet certain criteria before it posts a reward. The missing person must be an innocent victim and not involved in illegal activities.

Anyone with information about Phillips' death is urged to call Crime Stoppers at 596-COPS. Callers can be anonymous, and the Crime Commission is offering a separate reward of as much as $1,000.