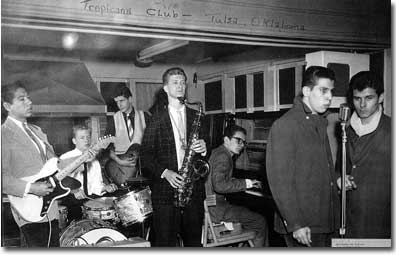 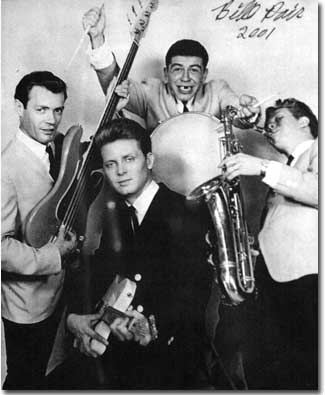 Bill Pear, of Kansas, Okla. (in black with his band the Wild Childs), "was pretty well-known in Tulsa," recalls pianist Jimmy Manry. "He and (J.J.) Cale were running pretty much neck-and-neck as far as chops go." 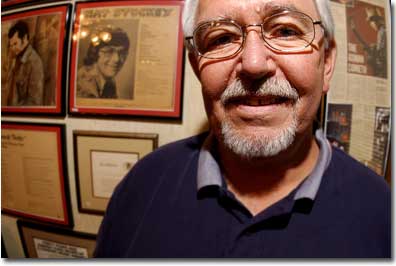 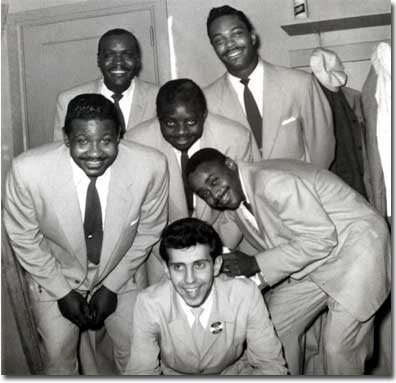 Don Wallace,Tulsa’s first rock ’n’ roll deejay hams it up with the Coasters 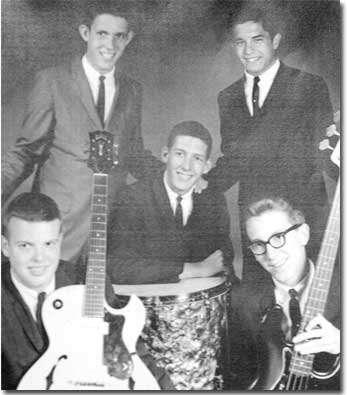 Larry Bell and the Teardrops, who saw their greatest fame in the 60s

KAKCs Dick Schmitz in the studio 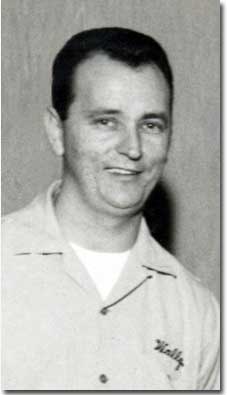 Bill Pear, of Kansas, Okla. (in black with his band the Wild Childs), "was pretty well-known in Tulsa," recalls pianist Jimmy Manry. "He and (J.J.) Cale were running pretty much neck-and-neck as far as chops go."

Don Wallace,Tulsa’s first rock ’n’ roll deejay hams it up with the Coasters

Larry Bell and the Teardrops, who saw their greatest fame in the 60s

KAKCs Dick Schmitz in the studio

As nearly as anyone can tell, the Tulsa area first started rocking to live local guys back in early 1956, when Gene Crose put together a little group and played the rockabilly tunes "Blue Suede Shoes," "Baby, Let's Play House" and "I Forgot to Remember to Forget" for the Cadet Capers show at Oklahoma Military Academy in Claremore, where he was enrolled. It wasn't long before he'd picked up a new band and begun doing Tulsa engagements.

According to a new poster, "Pioneers of the Tulsa Sound" (available from Janine Stovall at the Paperwork Company, 369-1014), the other major bands that sprang up over the next couple of years were led by Bobby Taylor and Clyde Stacy (beginning in '56); the late Wally Wiggins ('57); David Gates, Jumpin' Jack Dunham and the late Lucky Clark ('58), and Jimmy Markham and Tommy Rush (1959).

While Stacy actually knew and played with Buddy Holly when the two were high school students together in Texas, it was Wiggins whose repertoirie was heaviest with Holly's music. As Gene Crose remembers, "I met (guitarist) Donnie Bell when he was playing with Wally Wiggins, and all he could play was Buddy Holly, because that's what Wally Wiggins was doing."

"Lucky Clark was more of a laid-back guy," adds Dunham. "He was mostly blues, and a great singer." A couple of people have indicated that Clark was the first white vocalist signed to the famed Chess Records label.

Besides those nine pioneers, other Tulsa acts began to emerge in the late '50s. Vocalist Jeff Musick, whom Larry Bell calls "as important as anybody in this, although he was never hailed for it," fronted a popular outfit called the All-Nighters. More than one '50s musician describes him as a Rick Nelson type.

"Maybe he wasn't as highly visible as we were," says Jimmy Markham with a laugh. "Or not as crazy -- that's what I'm tryin' to say. But he's a great guy, and a dear friend of mine to this day."

(Musick's brother Scott, incidentally, became the drummer for the modern-rock band the Call.) Bassist Bill Raffensperger remembers another band, Dudley Murphy and the Fadeaways; Raffenesperger and Murphy were classmates at Edison.

"His first club gig was at Rocky's Continental in '59, and the interesting thing was, it was Carl Radle's first bass gig," remembers Raffensperger. "Dudley had this bass player, and he just wasn't quite cuttin' it. Carl went to Edison, and he knew these guys, so finally he just said, ' Well, I can try to play that.' I guess he'd just thought it over and decided he could do it. The next day, probably, he went out and bought a Danelectro bass."

In the '70s, Radle became one of rock's top bassists, notably in the Eric Clapton band Derek & the Dominos. He died in 1980.

Ronnie Morrison and the Playboys were another aggregation that appeared in the late '50s. Pianist Jim Blazer appeared with them for several years, participating in recording sessions at radio station KVOO for the singles "I'll Love You Forever More" and "The New Swim," which both received local airplay.

When Larry McNulty got out of the music business in the early '60s, he sold his bass to the son of his friend Johnny Dotson. Johnny himself had fronted a group called Johnny Dot and the Dashes, which, in 1959, gave a then-unknown singer named Bill Davis a chance to sit in at a north Tulsa club gig, thus helping launch one of the most extraordinary Tulsa Sound careers of all.

A couple of notable non-Tulsans who worked this town a lot in the late '50s were Rodney and the Blazers, an integrated band from Coffeyville, Kan., that set attendance records at the Cimarron Ballroom; and Kansas, Okla.'s Bill Pear and the Wild Childs. The Blazers were led by the still-active Rodney Lay, who went on to greater fame as the longtime leader of Roy Clark's band. Guitarist-vocalist Pear, according to saxophonist Johnny Williams, was the first of the area musicians to take off for California, predating Dunham, Russell, Gates and the others.

"Bill Pear was pretty well known in Tulsa back then," recalls pianist Jimmy Manry, a member of Pear's band. "He and Cale were running pretty much neck and neck as far as chops go."