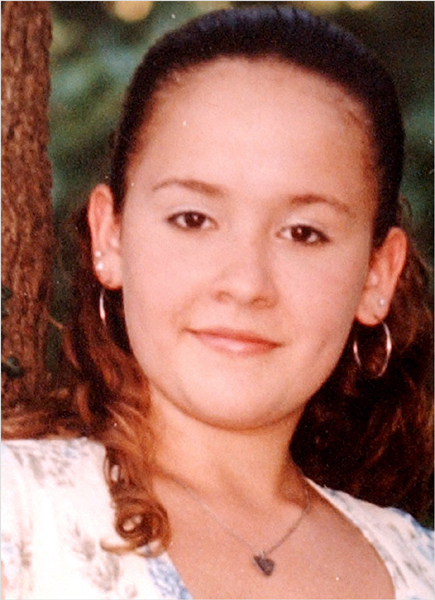 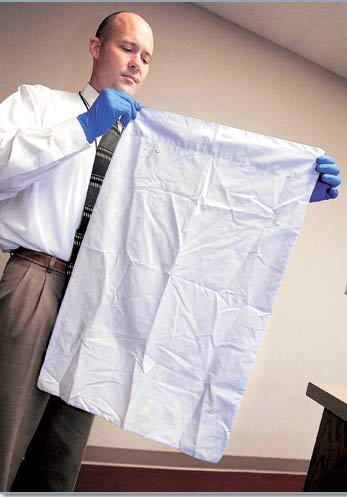 Tulsa Police Detective Jeff Felton holds a pillowcase that was found in TCC student Brittany Phillips’ apartment near 65th Street and Mingo Road after she was killed there three years ago. Police hope that their release of information about the pillowcase, which they believe was not Phillips’, will spur new leads in the case.

Tulsa Police Detective Jeff Felton holds a pillowcase that was found in TCC student Brittany Phillips’ apartment near 65th Street and Mingo Road after she was killed there three years ago. Police hope that their release of information about the pillowcase, which they believe was not Phillips’, will spur new leads in the case.

Officials hope a pillowcase left behind will provide the help they need to find the killer.

A light purple pillowcase left at the scene of Brittany Phillips’ rape and slaying may be the key to solving the 2004 homicide.As Sunday marks the third anniversary of the discovery of her body, detectives disclosed this piece of evidence for the first time in hopes of generating new leads that could break the case.‘‘A pillowcase that was found in the crime scene did not match any of her linens,’’ Detective Jeff Felton said.‘‘We believe that the perpetrator may have brought the pillowcase with him and left it behind.’’Despite one of the Tulsa Police Department’s most aggressive investigations in recent history, the killer— who raped and strangled Phillips in her apartment at 9416 E. 65th St. — remains on the loose.Police believe that the Tulsa Community College student had been dead for several days before she was found.The DNA of dozens of suspects has been tested. Detectives’ hopes have been dashed several times when suspects who seemed likely to have been the killer were eliminated.Felton said burglars will sometimes bring pillowcases with them to carry the loot from homes.Police believe that Phillips’ killer may have entered her apartment through an unlocked window.Detectives didn’t release any information about the pillowcase initially because they didn’t want the killer to get rid of potential evidence — any matching linens — that could link him to the scene.Since people often get new linens after a few years anyway, Felton said, investigators decided to disclose this one piece of evidence now in hopes of generating new leads in the three-year-old case.The pillowcase is light purple and has some bleached or faded white spots near the end of the pillowcase that is sewn closed. Felton said that it does not have a brand name.‘‘We are looking for information from anyone who maybe has a suspicious boyfriend or suspicious roommate who is out at odd hours of the night or may recall having a pillowcase like this missing,’’ Felton said.Meanwhile, Phillips’ family and friends will gather at her grave Sunday to remember her on the third anniversary of her death.Her mother, Maggie Zingman, has aggressively sought to bring attention to her daughter’s homicide to generate leads in the case. She even worked to have billboards posted about the case in Tulsa.She now believes that because so many Tulsa-area suspects have been eliminated, the killer may have moved away. But despite several pleas from her, the national media have refused to feature her story.She now plans to leave Oct. 12 on a caravan across the country seeking national publicity for the case. She will stop in at least eight cities to discuss her daughter’s murder with media outlets.‘‘It is hoped that because my SUV has her billboard on both side windows and the back, that this will be a story in itself,’’ Zingman said. ‘‘At year three, I feel I have to do more.’’Zingman said she plans to go to Springfield, Mo.; St. Louis; Indianapolis; Louisville, Ky.; Chicago; and Akron, Ohio. She also plans to go through Pennsylvania and Virginia before traveling to New York City.‘‘I guess the primary purpose is to get national coverage,” she said.‘‘I am sad, tired and frustrated and tired of doing so much of this on my own, having very few financial resources to do more,’’ Zingman said. ‘‘But I am still fighting as hard as I did the first year.’’She emphasized that she is forever indebted to Felton, the local media that have reported on her daughter’s death, and Lamar Outdoor Advertising for the continued use of billboards in the Tulsa area.Felton said he is always hopeful that any publicity will help generate much-needed leads.‘‘My hope is somebody will call in to just give us something else to go on,’’ he said.Felton said callers don’t have to have specifics about the case — that even just suspicions about potential suspects are enough for detectives to pursue.Police have created a database to log potential leads and suspects, he said.‘‘I go through reports all the time looking at burglars who have been arrested in the area at odd hours, window peepers, rapists,” he said. “All of these are the kinds of people we are going to follow up on and see if there are any connections.’’