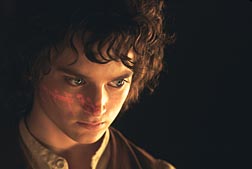 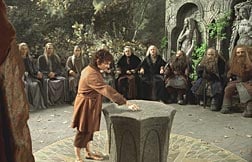 Frodo, played by Elijah Wood, must destroy the ring in the searing fires of Mount Doom in "The Lord of the Rings: The Fellowship of the Ring"

Below: Frodo (Elijah Wood) addresses the Council of Elrond about the fate of Middle-earth in the new adventure film "The Lord of the Rings: The Fellowship of the Ring"

Bottom: Liv Tyler is Arwen, an elf princess, who falls in love with a human.

One Ring to rule them all

Whether you view J.R.R. Tolkien's works as heavy Christian allegory, nuclear-age mythology, metaphor-leaden literature or just good old-fashioned fantasy storytelling, it's a sure bet that most readers and film lovers anticipating the arrival of the massive, three-part adaptation of "The Lord of the Rings" will carry high personal expectations into the theater.

Given that Tolkien's writings have served as influence and inspiration for everyone from George Lucas and his "Star Wars" sagas to a crusading legion of Dungeons & Dragons gaming devotees and on through J.K. Rowling and her pop-cult Harry Potter books, high hopes for any movie treatment of this granddaddy of myth-and-magic make the release of "The Fellowship of the Ring" one of those seismic cultural events that can threaten to drown out the simple joy of movie going.

But it's hard to imagine any but the most nit-picky and dogmatic being disappointed by this epic, lovingly crafted movie, the first installment in what's to become a monumental film trilogy celebrating Tolkien's sprawling fable of good versus evil ("The Two Towers" and "Return of the King" are scheduled for release at Christmas 2002 and 2003).

Weighty with Middle-earth lore and eye-dazzling vistas of the storybook Shire, the Elvish town of Rivendell and ravaged land of Mordor; alive with the personalities of jaunty hobbits, thunderous wizards, sturdy dwarves, toiling gnomes, enchanting elves and dashing warriors, director Peter Jackson's film is a fine wonder of technical achievement and masterly acting in service of a rich, rousing and meaningful story.

Jackson, a New Zealander whose previous works have ranged from the erratic horror outing "The Frighteners" to the chillingly good "Heavenly Creatures," teams with co-writers Fran Walsh and Philippa Boyens to reconfigure some plot elements, trim some scenes and characters, and transform Tolkien's dense, image-heavy prose into a swift and enthralling cinematic tale.

It runs three full hours, but it feels sharply focused and kinetic as it packs in enough general exposition to inform non-readers while including enough smartly selective local color and arcane Tolkien lore to satisfy most fans of the novels.

It's hardly necessary to provide a lengthy synopsis of the action, given that Tolkien's books are among the most widely read fantasy tomes of all time. Briefly, "The Fellowship of the Ring" sets up its hierarchy of magical rings and quickly informs us that the vanquished dark lord Sauron is hot on the hunt for the one ring that trumps all other rings -- the one that grants long life, invisibility and carries with it the inevitable seduction of evil (or, as it's always called in Brit mythology -- E-vill).

Fortuitously, the ring falls into the hands of a kindly hobbit -- diminutive creatures with pointy ears and big hairy feet -- named Bilbo Baggins (Ian Holm, impish and appealing) for many years before Sauron catches wind of it. Then Bilbo, at the urging of old friend and wizard Gandalf (Ian McKellen), passes it off to his spunky nephew Frodo (Elijah Wood), who must join a motley fellowship of warriors and carry the ring into the core of Sauron's lair to destroy it in the searing fires of Mount Doom.

Their journey is fraught with incident and adventure, as romantic sparks fly between the hunky Aragorn and the ethereal elf princess Arwen (Liv Tyler in a role greatly expanded from the books), as Frodo has a soulful encounter with the elf queen Galadriel (Cate Blanchett), and as the fellowship does extensive battle with all sorts of slimeys and baddies along the way. As they're relentlessly pursued by ghostly, black-caped ringwraiths on horseback, our heroes must also clash with armies of demonic, bat-faced orcs, a monstrous cave troll, a giant tentacled Balrog and a band of beastly Uruk-Hai, muscled-up goons who resemble WWF bruisers just emerged from the primal muck.

Orchestrating all the evil-doing, Osama-like, is the fallen wizard Saruman (a marvelously malevolent Christopher Lee), who has gone over to the dark side and battles wits with the cagey old Gandalf. Also, skulking around the fringes of the action is a creepy, effectively rendered mutant, Golum.

All along the way, there's plenty of soul-searching as Frodo questions his fate and his comrades must fight off the sinister allure of the magical gold ring. And it's in this aspect that Jackson and company elevate the film beyond mere adventure escapism. Jackson treats the story's metaphorical properties with due gravity, but without falling into turgid sermonizing. He strikes a nice balance of deeper meaning and sheer entertainment.

And the cast -- most notably the Shakespearean McKellen as the wizened conscience of the piece, and wide-eyed, fresh-faced Wood as its guileless heart -- performs with winning grace.

On the technical side, Jackson might be accused of giving too free a hand to his special effects and stunt people -- some of the battle scenes feel predictable, overproduced and overlong. But the overall visual splendor of the film, its painterly matte work and charmingly quaint set designs, override that small quibble. Most impressive is the way film technicians -- using small doubles, visual effects and old-fashioned forced-perspective camera shots -- depict the interaction between 3-foot-tall hobbits and towering humans in a way that feels utterly real.

But it may be Jackson's neatest trick to close out this open-ended story in an honest and satisfying way -- and without making the whole thing feel like just so much preface for the next two movies to come (example: "Star Wars: Episode 1 -- The Phantom Menace"). As Frodo paddles off toward more adventures in Mordor, we can savor the exploits of this fulfilling film as one chapter naturally closes. And we can look forward to turning the page on further adventures next holiday season. Anticipation is sweet.

Guide to the cultures of Middle-earth

HOBBITS: Gentle, furry-footed creatures who dwell in furnished holes. They grow to about 3-foot-6 and live about 100 years.

Bilbo Baggins (Ian Holm): Known for his own adventures and travels, Bilbo bequeaths the One Ring to his nephew Frodo.

Frodo Baggins (Elijah Wood): An adventurous hobbit who undertakes the quest to destroy the One Ring.

Samwise Gamgee (Sean Astin): Frodo's loyal friend and a member of the Fellowship.

ELVES: These noble, elegant, magical beings are not subject to age or disease, although they can be slain or die of grief.

Arwen (Liv Tyler): An elf princess, she falls in love with a human.

Elrond (Hugo Weaving): Arwen's father, he was born of an elf mother and a human father.

Legolas (Orlando Bloom): Lethal with knife and bow, he represents the elves in the Fellowship.

DWARFS: They're tough, but love beauty and live to about 250.

Gimli (John Rhys-Davies): His courage and fierceness are assets to the Fellowship.

WIZARDS: Supremely powerful, they can use their magic for good or evil.

Gandalf the Grey (Ian McKellen): A powerful wizard, he faces his greatest test in destroying the One Ring.

Saruman (Christopher Lee): Once head of the Council of the Wise, he has succumbed to the lure of power and evil.

Aragorn (Viggo Mortensen): Also known as Strider, this brave warrior is a cornerstone of the Fellowship.

Boromir (Sean Bean): He joins the Fellowship despite his misgivings about destroying the Ring.