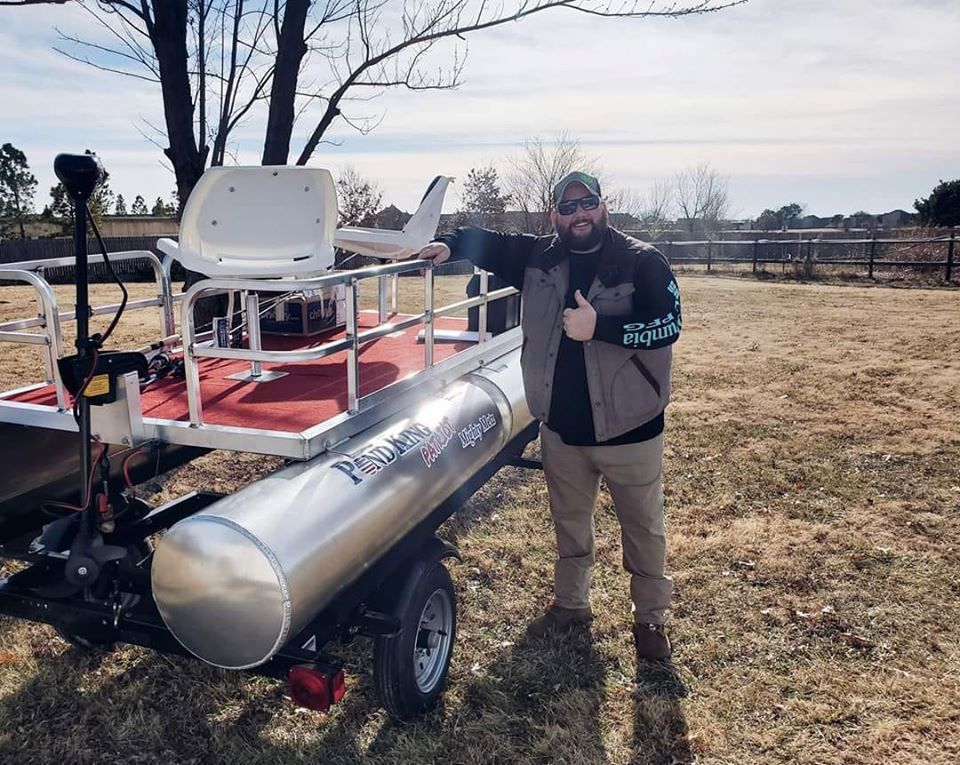 Marine Sgt. Jonathan Metzger of Owasso is preparing for a new fishing season with all new equipment.

Metzger recently won a new Patriot Pontoon Boat from Pond King Inc., a provider of lake products and services out of Gainesville, Texas, as part of the company’s national Patriots for Patriots contest.

The campaign, held the Fourth of July through Veterans Day, allows Pond King to give away five of its two-man fishing boats to one veteran from each branch of the military in honor of their service and sacrifice.

“To win it, it’s actually amazing,” Metzger said. “The fact that they’re honoring veterans … any organization to do that, I really respect it; I think it’s just so cool.”

Pond King Owner Brad Metzler kicked off the contest in 2019 after a customer who ordered a Patriot Pontoon Boat for his WWII veteran dad inspired Metzler to share the same experience with other men and women of the military.

Pond King employees drew the winning names following Veterans Day and announced them publicly after delivering the boats to the recipients in mid-December.

“Everyone who entered this contest was deserving of our thanks and recognition,” Metzler said in a release. “It would have been impossible to pick only one winner from each branch. Even among the many worthy entries, Sgt. Metzger’s story is particularly heart wrenching.”

As part of the 3rd Battalion Amphibious Assault, Metzger served in Operation Enduring Freedom and Operation Iraqi Freedom. He deployed a total of three times, twice to Iraq and once to Afghanistan, and his non-combat deployments include Thailand, Okinawa and Korea.

Metzger, 35, who suffers from PTSD and is fully disabled, continues to stay strong for his family, especially his 2-year-old son Jonathan Jr., who was diagnosed with hypoplastic left heart syndrome and has already undergone nine surgeries, including four open-heart procedures.

Metzger had to sell the boat he previously owned to help pay for his son’s medical bills. Thanks to the generosity of Pond King, however, the longtime Owasso resident is able to enjoy a new raft with updated features to share with Jr.

“It was a very emotional and very uplifting feeling to be able to close the year with this (boat),” Metzger said. “I can’t wait to take him fishing and teach him.”

Metzger, who grew up fishing, said he’s excited to carry on his family tradition by taking the Patriot out on the water, starting on Oologah Lake over the next several weeks.

“It’s in our blood,” he said. “I enjoy the outdoor adventure, just getting out of the house, just going out and being in Mother Nature, something very relaxing about it.”

Art is a seasoned reporter of over 15 years with an extended background in writing and editing for a variety of publications and organizations.