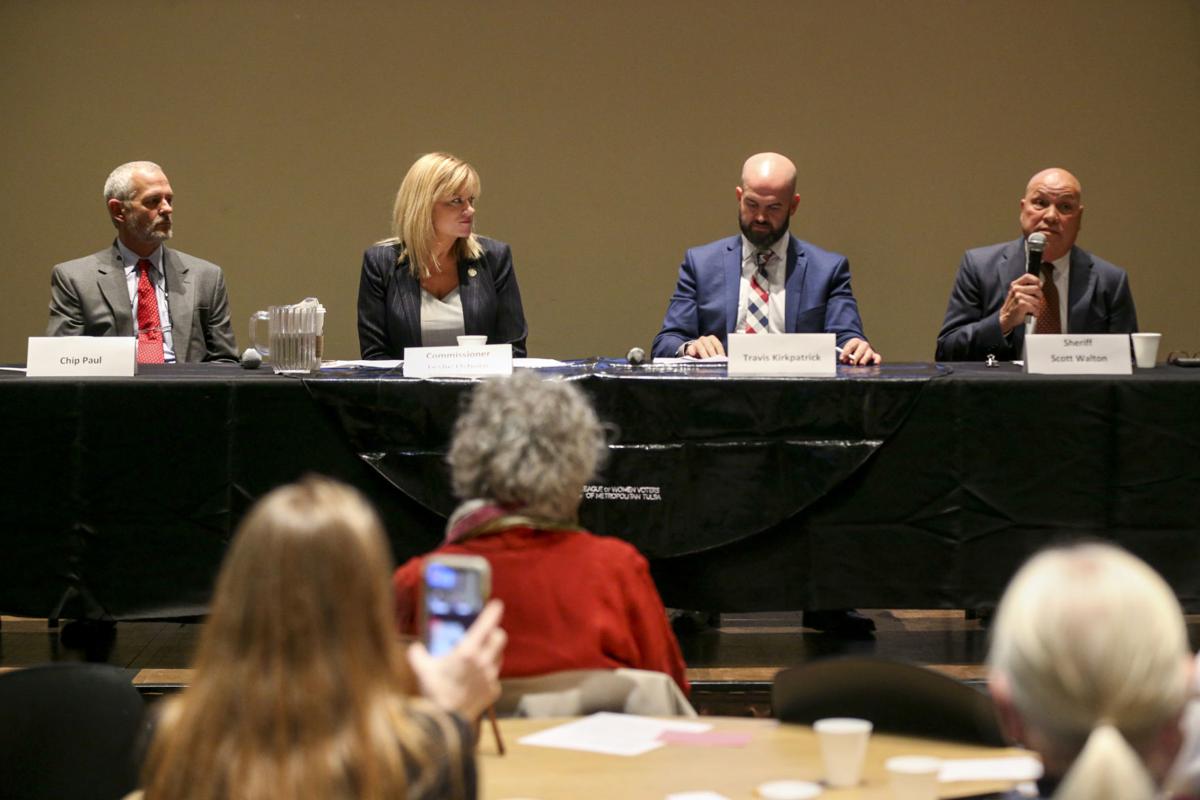 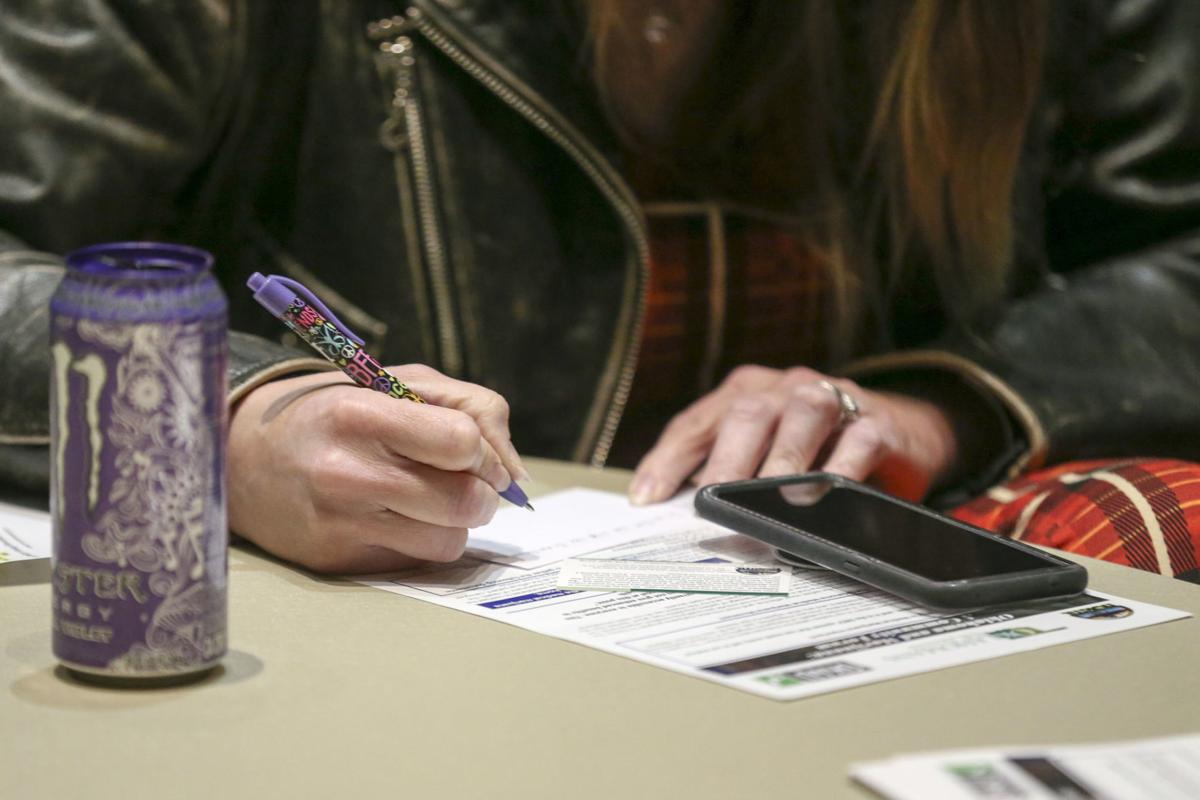 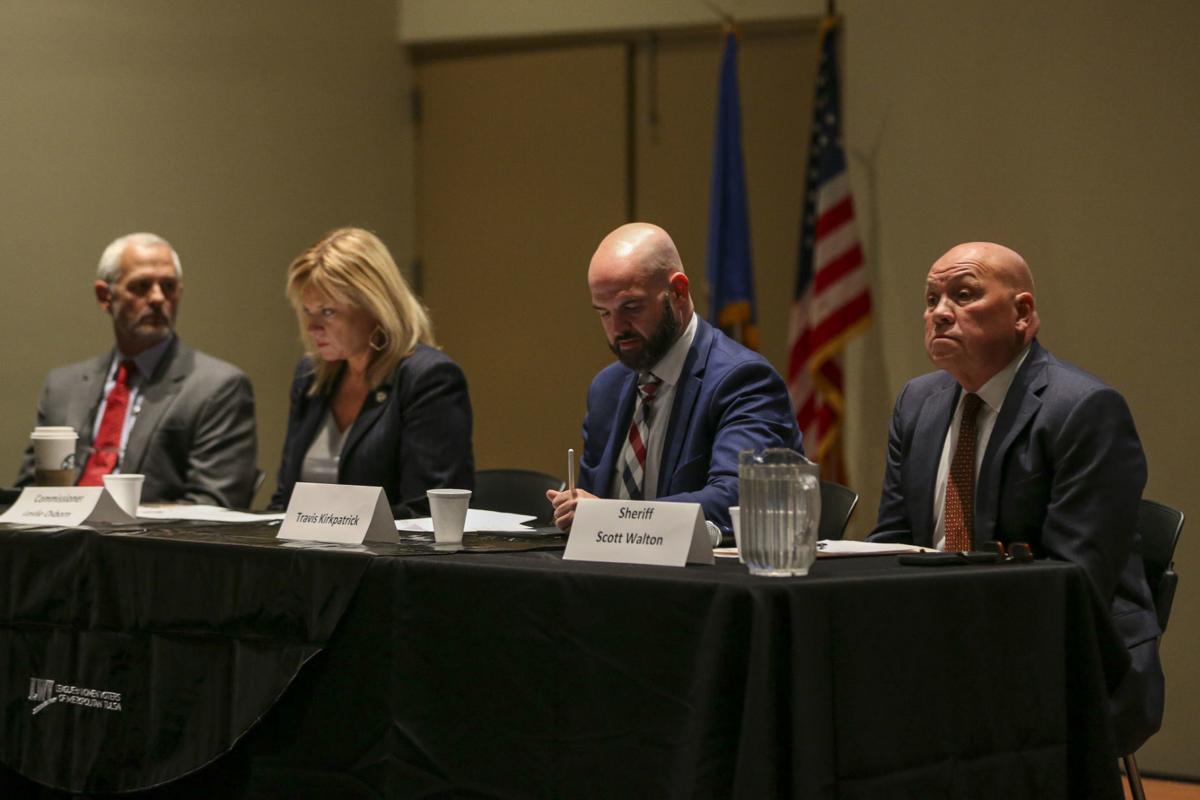 An Owasso medical marijuana advocate and a county sheriff who had a run-in in the past shared their opinions at a public forum on Tuesday, Feb. 11, but this time, no one was escorted out.

Rogers County Sheriff Scott Walton and Owasson Chip Paul, co-founder of the organization that put State Question 788 on the ballot in 2018, sat on opposite ends of a panel of four, separated by Oklahoma Medical Marijuana Authority Director Travis Kirkpatrick and Oklahoma Department of Labor Commissioner Leslie Osborn.

Walton and Paul reached an undisclosed settlement in Tulsa federal court in January in a lawsuit in which Paul accused Walton of assaulting him when was he forcefully removed from a public forum on State Question 788 in Claremore in 2018.

More than 50 people attended a League of Women Voters of Metropolitan Tulsa forum at the Charles Schusterman Jewish Community Center, where some wrote out questions about the state of the marijuana industry on index cards.

Quite a few in the crowd were dispensary owners, and it’s safe to say a majority were medical marijuana supporters.

Several scoffed when Walton said he didn’t believe that marijuana has a legitimate medical use, and many applauded when Kirkpatrick, who was officially named director of OMMA about three weeks ago, announced that all medical marijuana products sold through growers and processors in the state will soon have to show proof of its testing in a nationally accredited, state-approved lab.

Kirkpatrick, as well as Paul, emphasized the uniqueness of Oklahoma’s medical marijuana industry, calling it “the most rapidly developed marijuana program in the nation” with a current total of about 260,000 patients — more per capita than any other state.

Paul, chairman and co-founder of Oklahomans for Health, said about 6% of Oklahoma residents are medical marijuana license holders, blowing the next highest percentage — about 3% in Montana, Maine and California — out of the water.

Paul acknowledged the state’s saturation, saying the dispensary advertising visible almost everywhere annoys even him, but he said the free market economy will only continue to improve the products and the industry.

Paul emphasized the importance of a regulated industry and said he doesn’t support the legalization of recreational marijuana in the state.

He spoke of how SQ 788 was “a complete grassroots movement” for the people, by the people and scoffed at a recreational petition that surfaced out of Oklahoma City in December and was withdrawn about two weeks later.

Asked whether patients were able to access marijuana for recreational use, he said “probably,” but emphasized that most are using it for medicinal purposes, pointing to the average age of patients in the state being over 40 and calling the industry a “godsend” for the elderly.

“The elderly have come to us because they’ve tried everything,” she said. “These people have lost hope. They don’t want to live anymore. And then, after they get educated … they walk out the door with hope that it’s going to work for them, and it does. Every single person, it does.”

Ashley Lowry, who owns Gro Wellness in Chouteau, said she was impressed with Kirkpatrick’s expressed commitment to protecting consumers with effective regulation during the forum because much of the market is uneducated on what good products are.

“It’s a huge disconnect,” said Christy Palmer, a cannabis therapy consultant at Local Releaf in Tulsa. “People go and get their license, and if they don’t go to a knowledgeable dispensary, they don’t know what to get.

“We’ve talked to elderly people who are taking 25-milligram gummies when they should’ve started with 2.5-5 milligrams, but they’re following directions.”

And recreational marijuana would not help, the group said.

“Once it goes rec, those people that didn’t want to listen are never going to listen,” Palmer said.