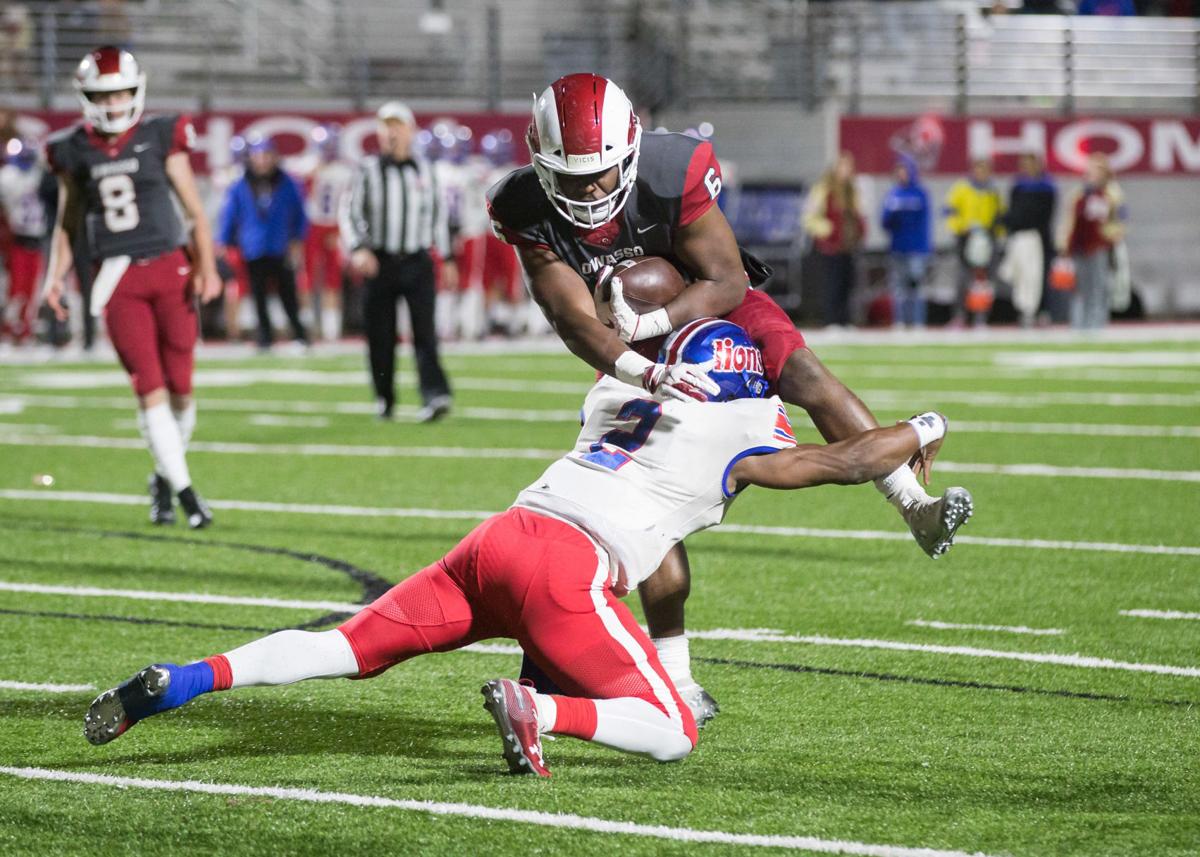 Mario Kirby (top), getting tackled by Moore’s Daniel Hishaw Jr. last Friday, and the Owasso Rams already have locked up the District 6AI-2 title and a playoff berth heading into their regular-season finale Friday. BRETT ROJO/for the Tulsa World 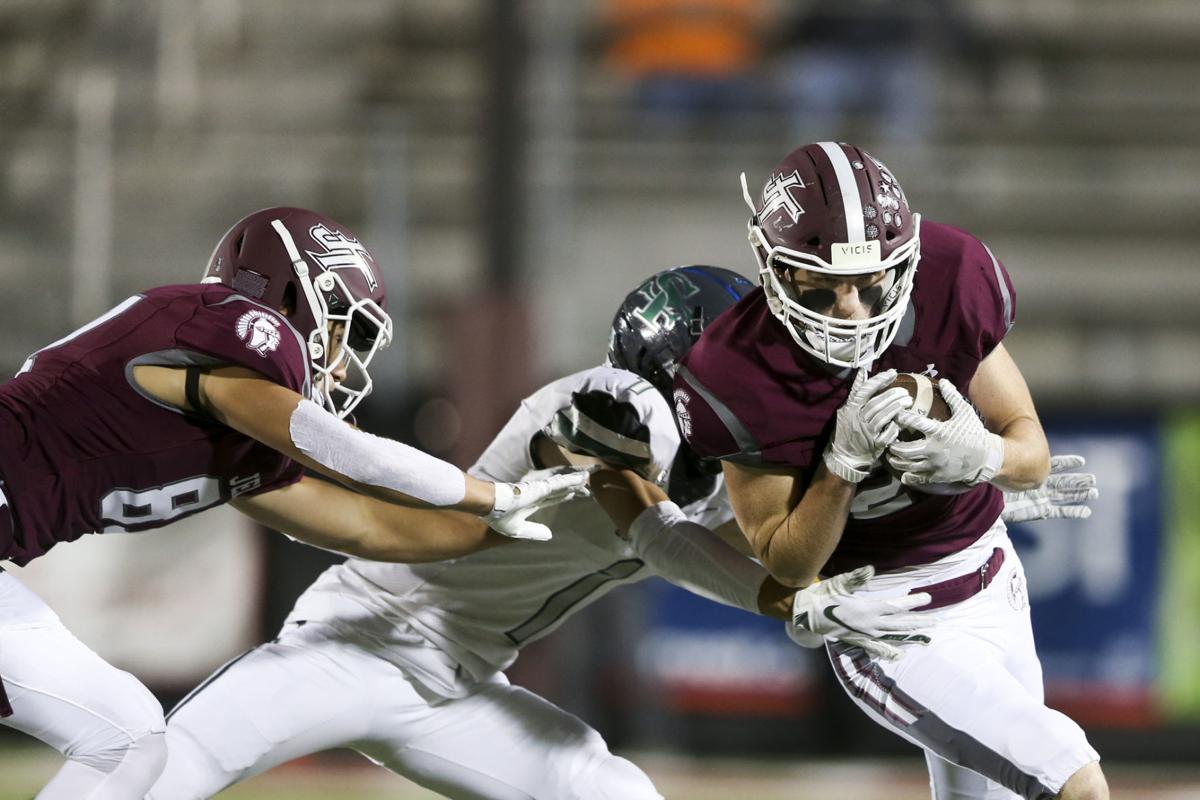 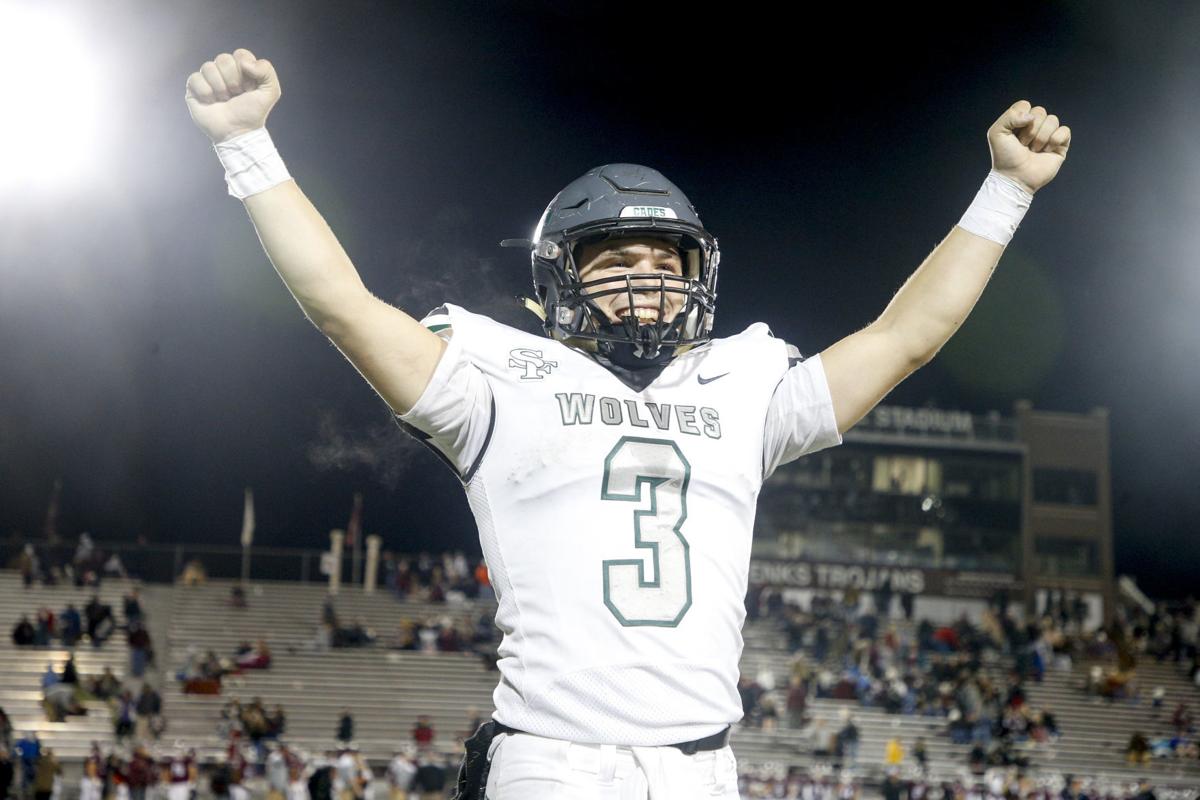 Mario Kirby (top), getting tackled by Moore’s Daniel Hishaw Jr. last Friday, and the Owasso Rams already have locked up the District 6AI-2 title and a playoff berth heading into their regular-season finale Friday. BRETT ROJO/for the Tulsa World

A win Friday over visiting Westmoore would see the Trojans into the Class 6A Division I playoffs, extending the state’s second-longest streak of postseason appearances to 31.

But a loss and Norman upset of Edmond Santa would scramble the District 6AI-1 standings and leave the Trojans on the sidelines when the playoffs start next week.

Many teams will be under similar duress on the final Friday of the regular season. Playoff berths and district titles will be decided at dozens of locales around the state.

Cascia Hall already had extended the state’s longest streak of playoff appearances to 33 before ending the regular season at Inola on Thursday night.

But the Commandos and Longhorns were still jockeying for position in District 3A-4, while Verdigris visits Berryhill on Friday to decide first place.

While a Santa Fe win over Norman would help Jenks, Broken Arrow’s Tigers will be hoping for a different result in the Edmond matchup as they visit Enid. A Santa Fe loss and BA win would give the Tigers first place in the highly competitive District 6AI-1.

For your consideration, the Tulsa World has computed playoff possibilities in each of the state’s 44 districts covering all nine classifications.

Other key games: Sapulpa at Ponca City, Shawnee at Bartlesville

Already in: Noble is first, El Reno is second and Ardmore is third.

Possibilities: Mac defeated El Reno 17-7 and will be in if Duncan loses to Altus.

Already in: Tahlequah is first, Collinsville is second and Claremore (4-2,+45) is in.

Possibilities: Pryor defeated Memorial 50-8, but the Tigers can only advance if Skiatook loses or Claremore wins.

Already in: Heritage Hall is first, Perkins-Tryon is second. Kingfisher is third by virtue of its 44-26 win at John Marshall on Thursday and John Marshall is fourth.

Possibilities: Cascia Hall locked up third place with a 42-7 win at Inola The Commandos can be second with a Verdigris loss but cannot be first. Verdigris can be first on marginal points with an 11-point win over Berryhill, but will fall to third with a loss. Berryhill is first with a win and cannot be lower than second with a loss.

Already in: Jones is first, Meeker is second, Chandler is third

Possibilities: Okemah is in with a win. Prague needs a win and Okemah loss.

Already in: Metro Christian is first, Adair is second and Nowata (4-2) is in.

Possibilities: Wyandotte-Nowata winner is third. Wyandotte is fourth with a loss unless Kansas wins and Salina loses.

Already in: Vian is first, Holland Hall is second and Tahlequah Sequoyah (4-2) visits Spiro (4-2) to determine third and fourth place.

Already in: Thomas is first, and Texhoma is second.

Possibilities: A Fairview win over OBA would create a three-way tie with Mooreland and a Hooker win would create a four-way tie. In both cases, marginal points will decide the third and fourth spots. OBA is third with a win, but could be out with a loss of 14 or more. Mooreland is in with a Hooker loss and will be third with a Fairview win, but would be out with a Hooker win and Fairview loss. Fairview’s only option is a 14-point win over OBA.

Already in: Minco (5-0) visits Cashion (5-0) to decide first and second. Crossings Christian is third and Watonga is fourth.

Already in: Ringling is first, Dibble is second.

Already in: Rejoice Christian is first and Commerce is second. Oklahoma Union and Colcord will decide third and fourth.

Already in: Central Sallisaw (5-0) visits Gore (5-0) to decide first and second. Savanna is third and Warner is fourth.

Possibilities: Laverne is second, Turpin third and Seiling fourth unless Seiling beats Laverne by 15 or more, forcing a three-way tie that can’t be decided by marginal points. Order of finish would then be decided by a coin flip or by drawing lots.

Already in: Pioneer-Pleasant Vale (4-0) visits Cheorkee (4-0) to decide first and second. Ringwood is in.

Other key games: Kremlin at Ringwood, Waukomis at Garber

Possibilities: Ringwood is third unless it loses to Kremlin and Garber also loses. Garber is in and will be fourth with a win by three points or more. Kremlin’s likely only hope is a win and Garber loss. Waukomis could qualify for the fourth spot with a win and Kremlin loss.

Possibilities: Strother is in in with Wetumka's 46-0 loss to Weleetka on Thursday and will be third unless it loses to Caddo by 15 or more. Wetumka is in unless Caddo wins by 14 or more.

Already in: Dewar is first, Keota is second and Arkoma (2-2) visits Gans (2-2) to determine third and fourth place.

Already in: Davenport is first, Prue (3-1) visits Davenport (3-1) to determine second and third place and Yale is fourth.

Possibilities: Coyle is second with a win but could fall to third or fourth on marginal points if it loses by 14 or more. Covington-Douglas cannot be lower than third and will be second if Coyle loses by 14 or more. Bluejacket needs a 15-point win over Coyle to escape fourth place.