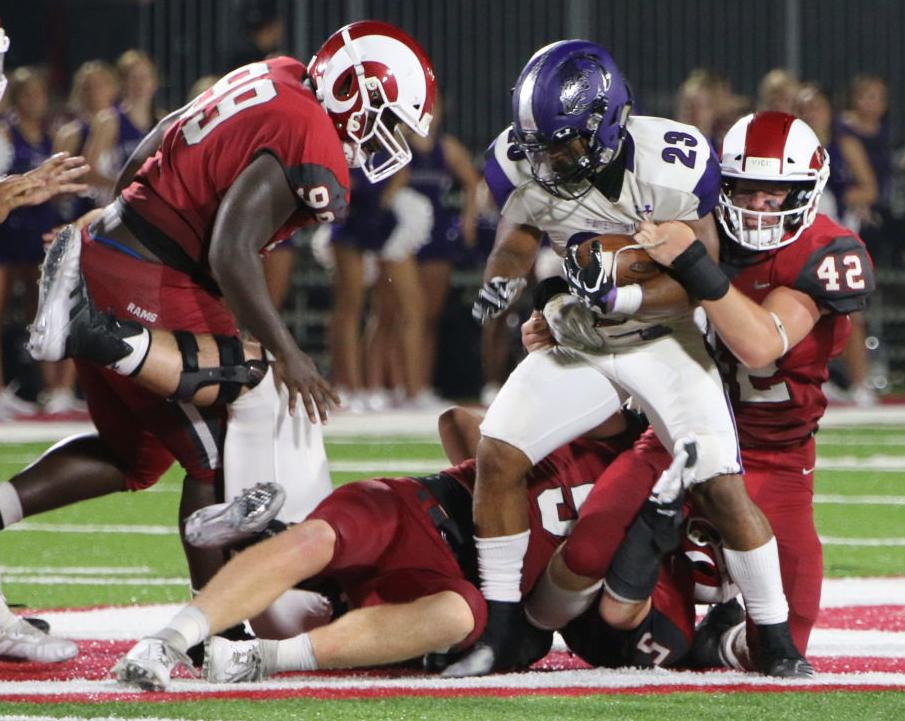 Owasso defenders Kameron Bland (99), Haydon Grant (5) and Brendan Dye (42) combine for the tackle against Fayetteville’s No. 23 last week in a 51-19 win. The No. 2-ranked Rams will again be tested Friday when they travel to No. 1 Broken Arrow. JENIFER DeCASTRO/For The Tulsa World 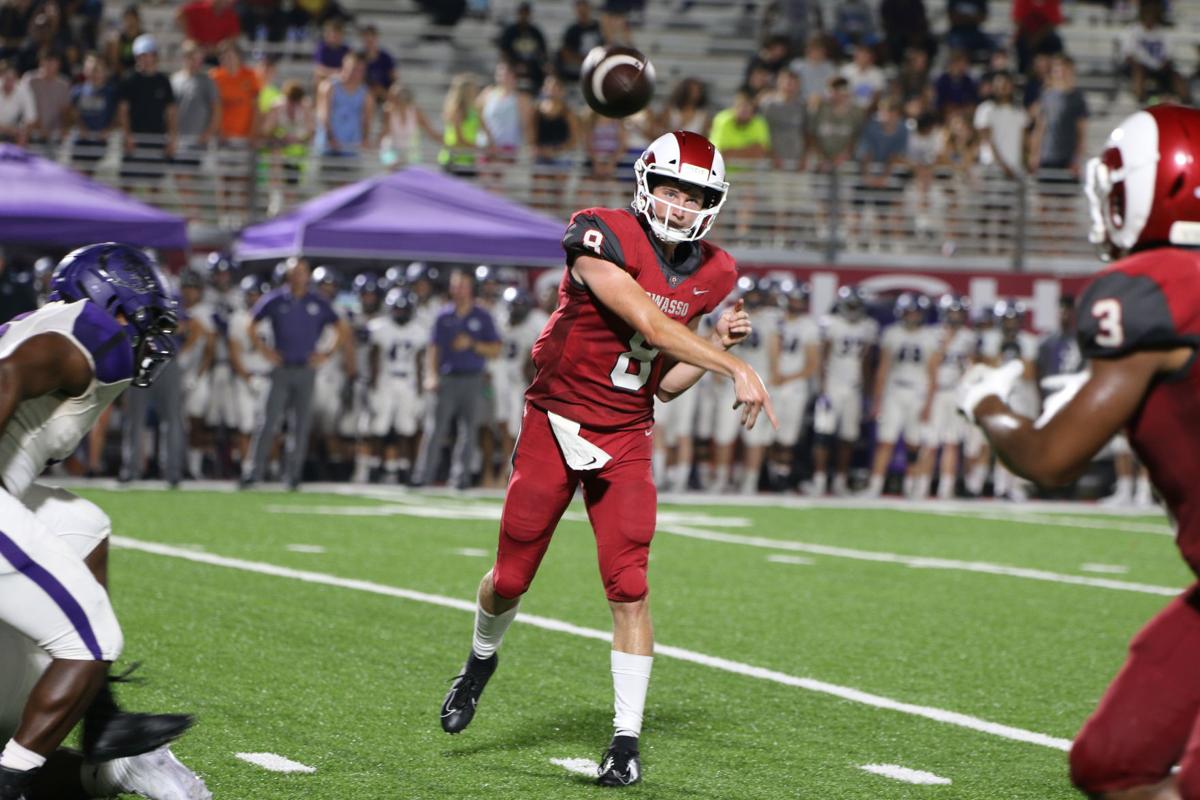 Owasso quarterback Cole Dugger, shown here throwing a pass to running back Isaiah Jacobs against Fayetteville, and the No. 2-ranked Rams go on the road to face No. 1 and defending state champion Broken Arrow Friday. JENIFER DECASTRO/For The Tulsa World

Owasso defenders Kameron Bland (99), Haydon Grant (5) and Brendan Dye (42) combine for the tackle against Fayetteville’s No. 23 last week in a 51-19 win. The No. 2-ranked Rams will again be tested Friday when they travel to No. 1 Broken Arrow. JENIFER DeCASTRO/For The Tulsa World

Owasso quarterback Cole Dugger, shown here throwing a pass to running back Isaiah Jacobs against Fayetteville, and the No. 2-ranked Rams go on the road to face No. 1 and defending state champion Broken Arrow Friday. JENIFER DECASTRO/For The Tulsa World

This game has its own bowl designation.

And the victor will be recognized as the frontrunner for the gold ball going into district play.

No, this game will not take place in south Tulsa. Instead No. 2 Owasso (2-0) will travel to top-ranked Broken Arrow (2-0) in the inaugural Folds of Honor Patriot Bowl driven by Jim Glover Auto Family.

Kickoff at Broken Arrow’s Memorial Stadium between the last two state champions is set for 7 p.m.

Both squads enter with momentum on their respective sides.

Owasso delivered an impressive 51-19 romp over Fayetteville (Arkansas) in its home opener last week (see recap on page 15). The Ram defense intercepted three passes, two of which were returned for touchdowns, and rolled past the No. 2-ranked team in Arkansas’ Class 7A.

Broken Arrow blanked Union 14-0 for its first road win against the Redskins in 33 years. The Tigers have won their last 15 games.

“I’m sure there will be a lot of hype around the game with the rankings,” said Rams senior quarterback Cole Dugger. “…I’m sure it’ll be a great atmosphere.”

In his first season as Owasso’s signal caller, Dugger has thrown for 596 yards and six touchdowns through the first two games. The Rams have struck an offensive balance around Dugger. OHS has rushed for at least 200 yards in victories over Fayetteville and Bentonville West.

Senior running back Isaiah Jacobs has ran for 322 yards and averaged more than 8 yards per rush.

The Owasso defense comes off of one of its most impressive performances. OHS limited Fayetteville’s prolific offense to 315 yards, nearly 300 fewer yards than it allowed in the 2018 meeting with the Purple Dogs.

Owasso has forced five turnovers in the first two weeks and has a plus-4 turnover margin. Blankenship attributed that number to the havoc being caused by players like defensive end Haydon Grant and linebackers Emaud Triplett and Brendan Dye, combined with a veteran secondary.

Junior safety Gage Laney had two of those Ram interceptions against Fayetteville, one of which he returned for a 70-yard score. Laney shared Blankenship’s perspective when he shared the key to success against a Broken Arrow offense that has ran the ball on 82 percent of its snaps over the first two weeks.

“The key will be pressure from our d-line,” Laney said. “In the back end, we just have to read our keys and stay locked on our man.”

All-time series vs. Owasso: 28-12 overall. Will actually be the 42nd meeting between the schools. The 1927 outcome is unknown.

Last meeting: Broken Arrow claimed its first ever state title, aided by two wins over the Rams a season ago. BA won 47-20 in the regular season meeting then outlasted OHS in a 10-7 defensive slugfest in the state semifinals.

Scouting Broken Arrow: The defending 6AI champions bring a 15-game win streak into Friday’s game following an historic victory at Union a week ago. BA shut out the Redskins, 14-0, for its first win at Union-Tuttle Stadium since 1986. The Tiger defense held Union to 104 yards of total offense on 42 snaps and intercepted two passes. Offensively, QB Jake Rains was just 4-of-7 passing against Union, but struck for 177 yards, highlighted by a 75-yard TD bomb to Isaiah Keller that snapped a scoreless game in the third quarter.

Laney’s big night: The Owasso secondary comes into this week fresh off a stellar performance in last week’s 51-19 win against Fayetteville. One of the brightest starts of the defensive backfield was junior free safety Gage Laney.

Laney swiped two of the Rams’ three interceptions in the game, one of which he ran back for a 70-yard touchdown. Laney’s pick six came just moments after Omarr Barker had turned the trick. Following Laney’s return with 2:16 left in the first half, Owasso was in the midst of running away from the Purple Dogs with a 27-6 lead.

Laney’s interception came on a fourth and 4 from the Ram 38. As Laney stepped in front of a Hank Gibbs’ pass near the Fayetteville sideline and scooted untouched to the endzone.

“We had a lot of pressure coming and I knew the ball was going to come out quick,” Laney recalled of the play.

Dugger’s long run: QB Cole Dugger has done plenty of damage with his arm through the first two games of his Owasso career. The senior has thrown for nearly 300 yards per game and completed a tick under 70 percent of his passes as a Ram.

But Dugger produced the longest play Owasso’s young season with his legs against Fayetteville. His 77-yard run midway through the second quarter set up the Rams second score against the Purple Dogs, a 1-yard plunge by Isaiah Jacobs.

On a read option call, Dugger dropped back to pass and took off after the middle of the field parted much like the Red Sea.

“Nobody was standing in my way so I took off. It kind of shocked me how open it was,” Dugger said of his longest run ever on the gridiron.