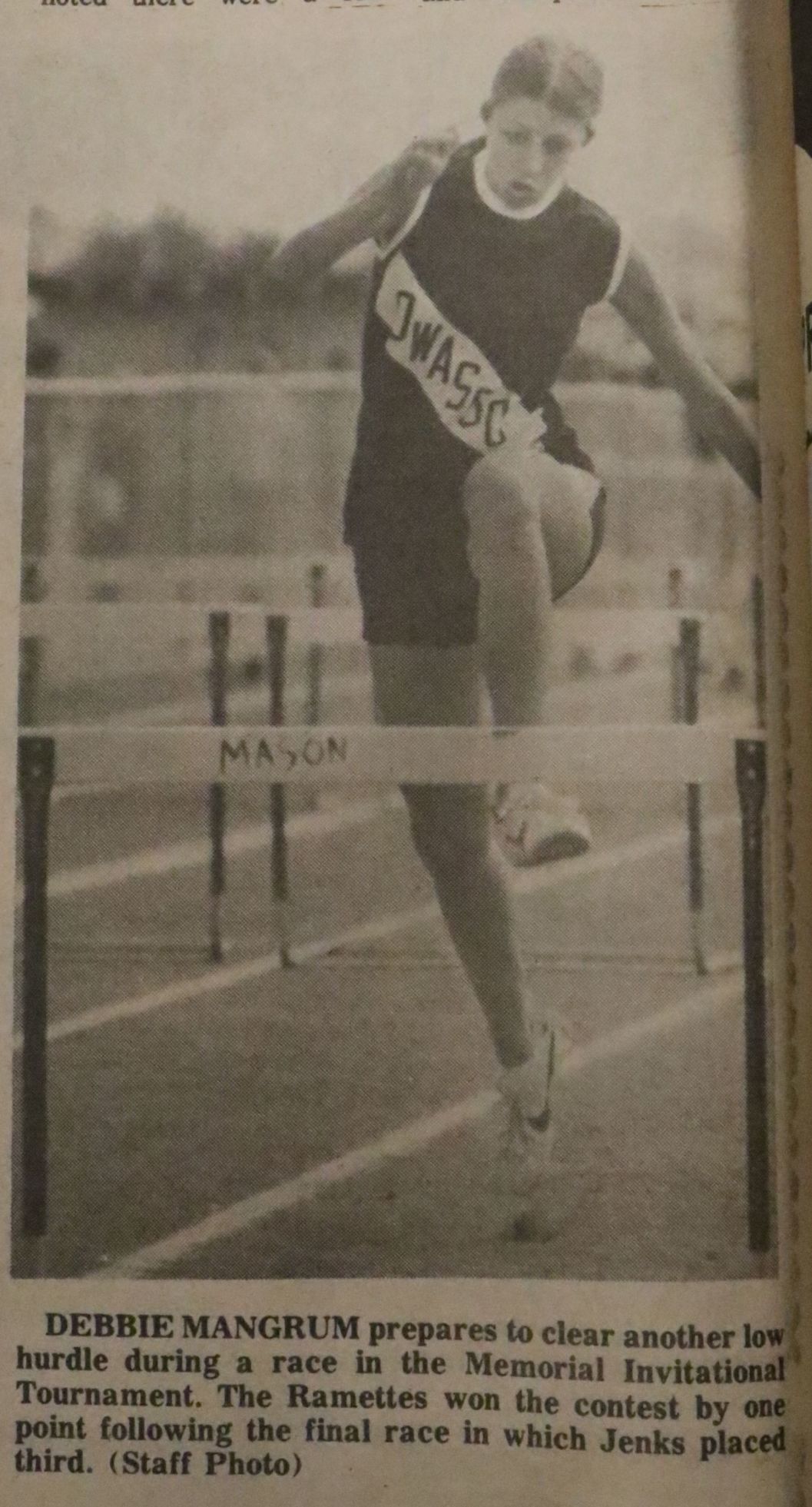 Editor’s note: With local sports on hold due to the coronavirus outbreak, the Reporter is taking a look back at some of the more memorable stories in Owasso’s rich athletic history. This edition includes the reprint of Reporter articles following the 1978 girls state track and field team championship. Despite taking just six qualifier to state, the Rams captured their long team state crown in the sport.

Coach Johnny Branch predicted that 40 points would win the girls 3A state track title. He also knew that his Ramettes would have to outdo past performances.

In both cases, Branch was right. It took 48 points to win the title. This was the amount the Ramettes collected enroute. The Ramettes also outdid themselves and new personal and meet records were set. But what made things even nicer was that five of the six girls participating made All-State. This was determined in competition on Monday at Moore.

“I started celebrating when we had collected 32 points,” Branch said. “I knew then that there was little chance of any other team overtaking us. We would have had to quite at that point.”

The Ramettes started the state track meet in Oklahoma City on May 12 by serving notice they were there to win. At the close of competition on Friday, the Ramettes had earned 18 points and three state titles. The races were not run until Saturday.

Jo Ellen Kinnamon won the discus competition with a throw of 119 feet, 11 inches. This was her best throw of the year. It was also the best in the state. Her shot put toss was 39 feet two inches, not quite as good as the regional mark of 39 feet nine inches, but the best in the state meet. Keli Blissit won the long jump competition in the girl’s 3A division with a leap of 17 feet 7 ½ inches. This was a state meet record.

The closest competitor to the Ramettes had seven points at the close of events on Friday.

Things opened fast for Owasso on May 13 as speedy Karen Robinson not only won the 880 yard run, she also set a new meet record by covering the distance in a total time of 2:21.2. She broke the old record which she also held. The 880 yard relay team pulled a surprise on everyone by finishing second in the event. This was the best time the team ran all year, Branch said. Their time was 1:47.7 and was good for eight points. This victory, plus Karen’s first place earlier, gave the Ramettes 32 points.

“I was already celebrating,” Branch admitted. “I knew it would be tough for anyone to beat us.”

The next race was the 100 yard dash. Again, Karen finished first with a time of 11.15 seconds. This was another new state meet and personal record and 38 points for the Ramettes. But it was Gwen Ayres who pulled the surprise on everyone.

Gwen was competing in the mile run on guts, Branch said. In sixth place, she passed two girls finished in fourth for an additional two points. This was the even 40 mark needed.

“Gwen ran on guts and determined to win the mile race,” the coach said.

Perhaps one of the most exciting finishes came next when judges decided Karen Robinson was the winner of the 220 yard race. It was 25 minutes to decide the winner, the coach said. Keli Blissit placed fourth in the contest and the Ramettes had their 48 points.

From that point on, it was watch the rest of the state meet, because the Ramettes had finished their competition.

“I don’t think I ever really felt threatened in the meet,” Branch said. “It is hard to be threatened when the girls performed as they did. I am extremely proud of them and they have given me something I have often dreamed about … a state championship.”

But the Ramettes weren’t finished. On Monday they performed in the meet of champions. The result was Keli Blissit, Karen Robinson, Jo Ellen Kinnamon, Debbie Mangrum and June Jackson making All-State. Only Gwen Ayres didn’t make the rating. Branch predicted the sophomore would be a future all-stater for the Ramettes.

With the remainder of the 2019-20 high school sports season coming to an end due to the coronavirus pandemic, the Reporter continues its serie…