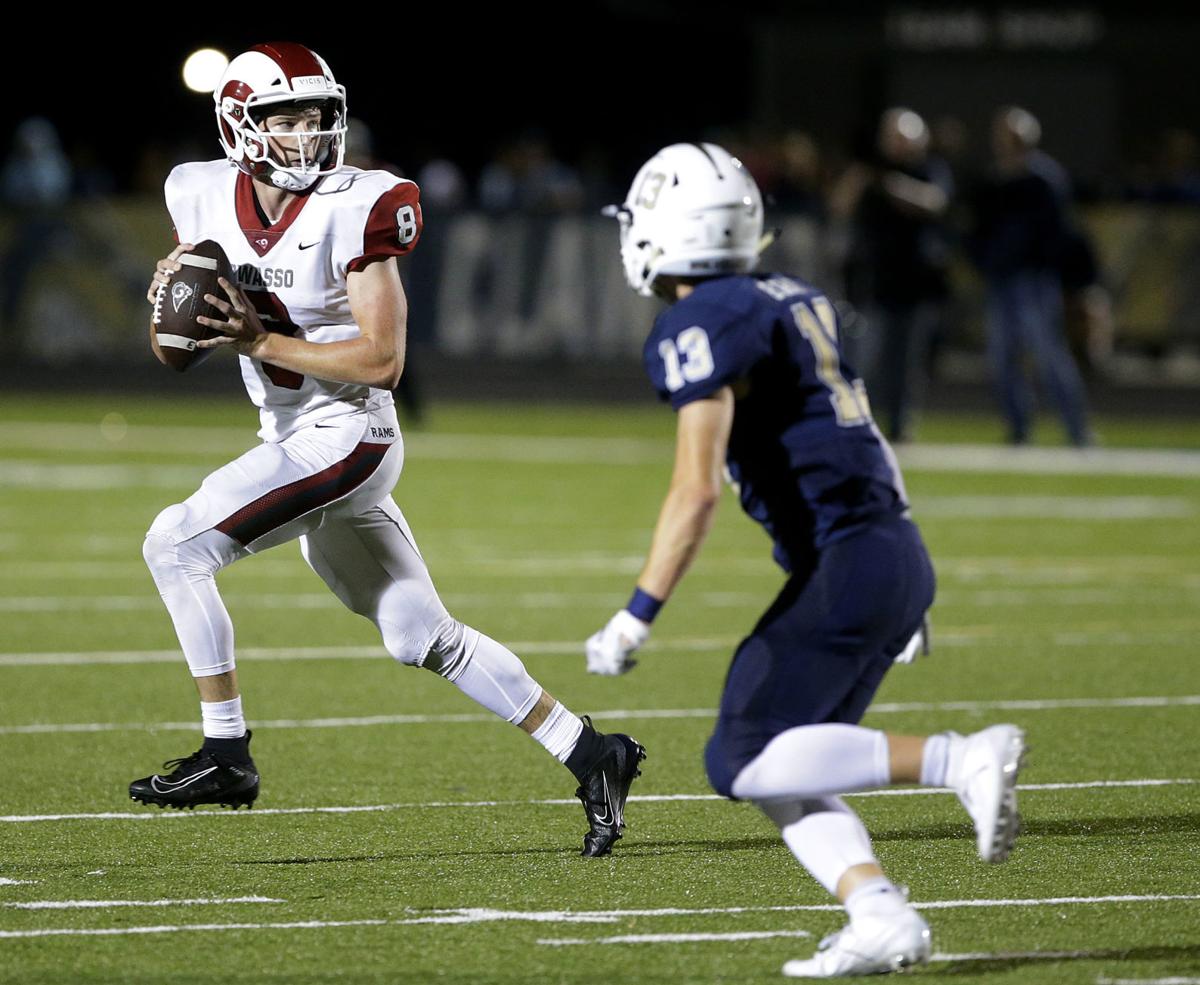 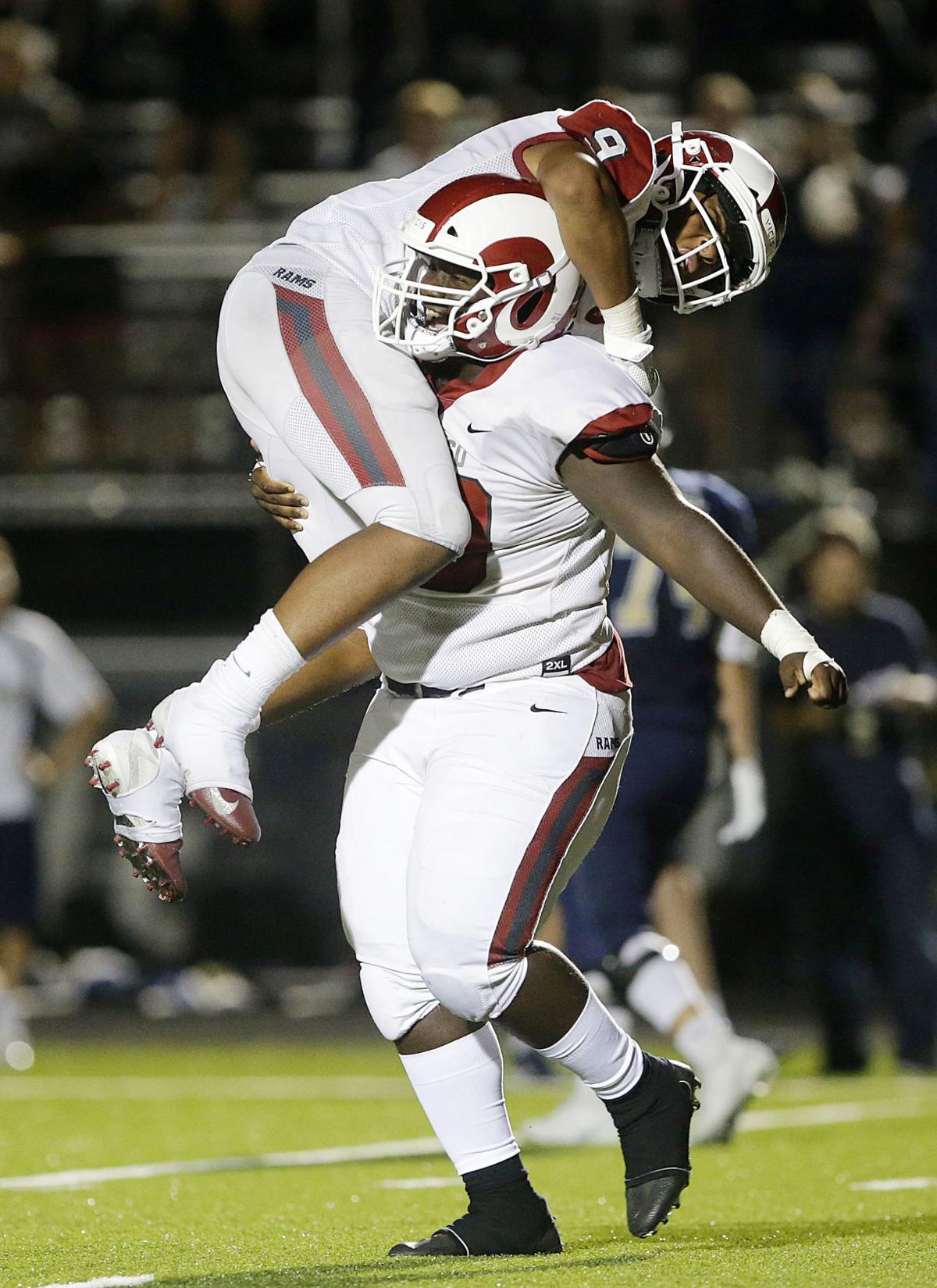 Owasso’s Kameron Bland carries Emaud Triplett off the field after recovering a fumble in the end zone for a touchdown. MIKE SIMONS/Tulsa World 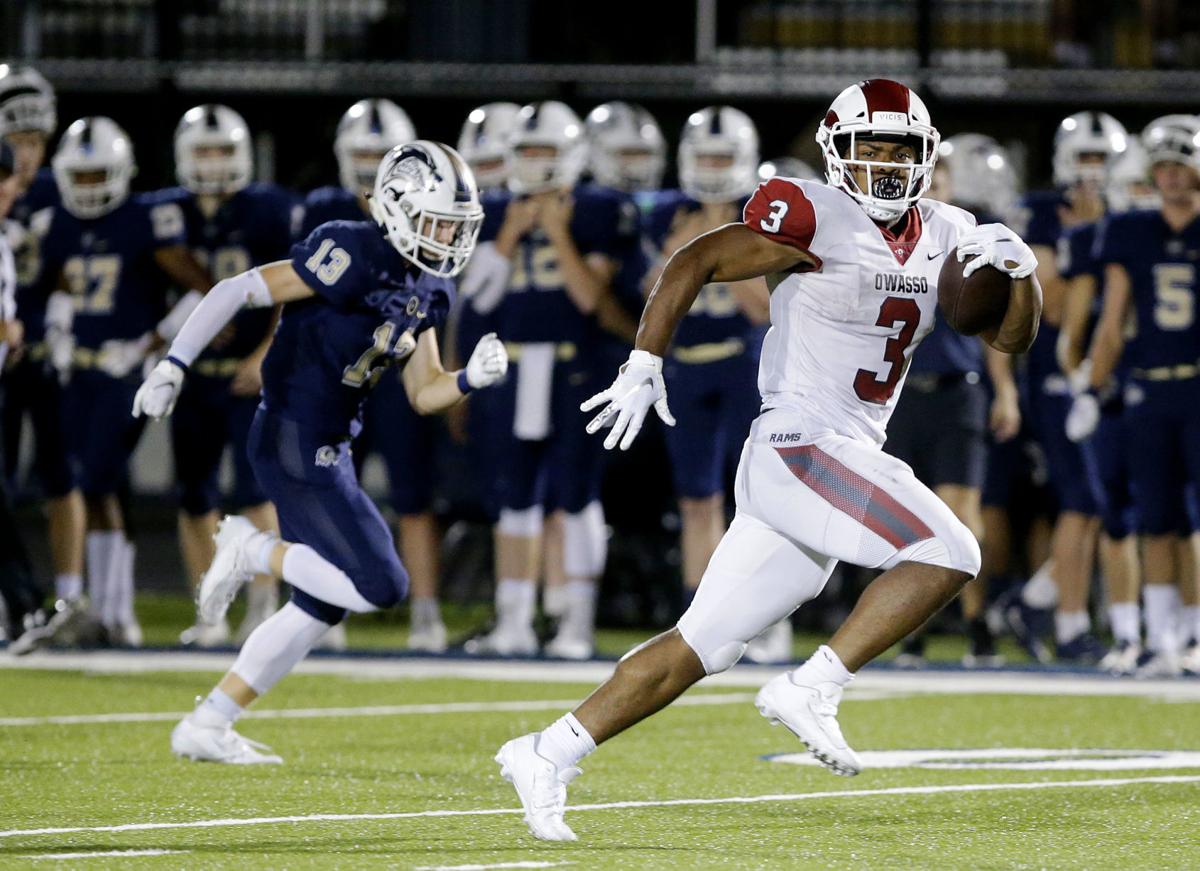 Owasso’s Isaiah Jacobs runs for a 61-yard touchdown against Bentonville West. Jacobs and the Rams rallied for a 47-34 win. MIKE SIMONS/Tulsa World 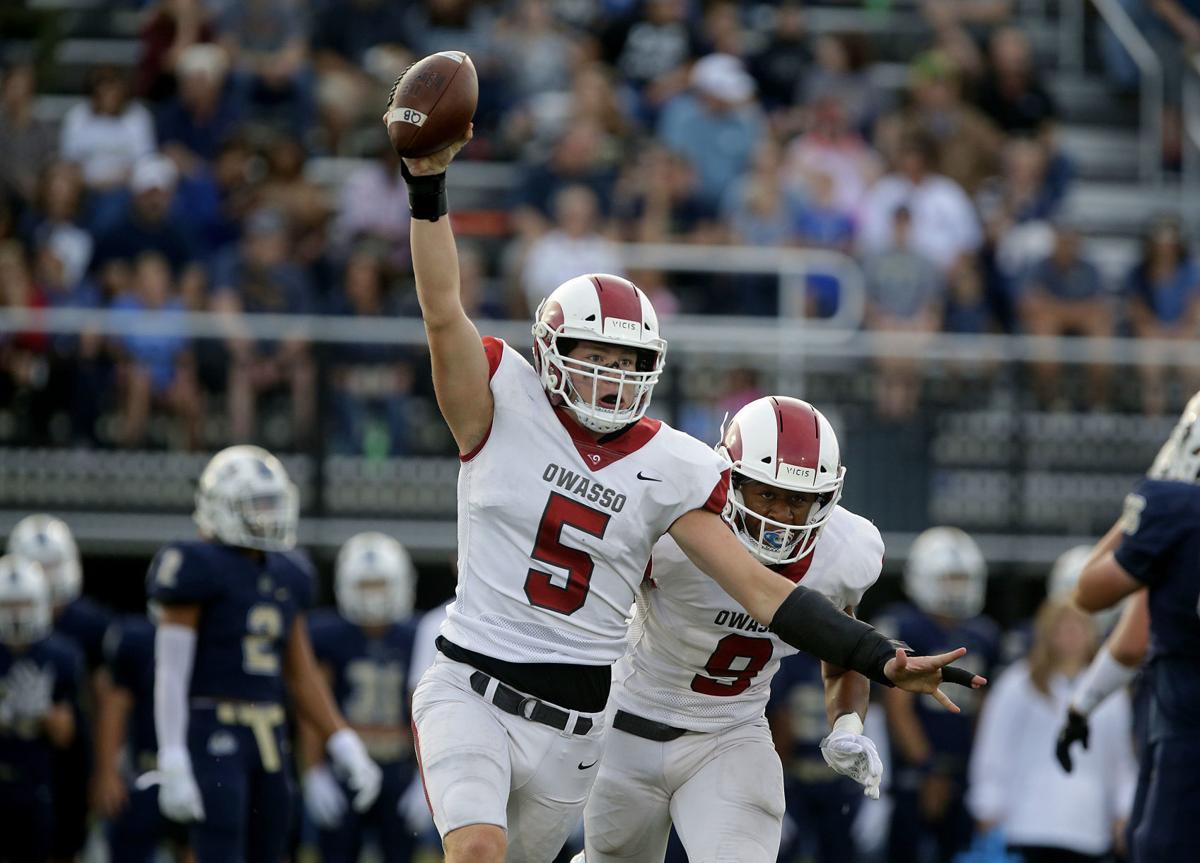 Owasso’s Kameron Bland carries Emaud Triplett off the field after recovering a fumble in the end zone for a touchdown. MIKE SIMONS/Tulsa World

Owasso’s Isaiah Jacobs runs for a 61-yard touchdown against Bentonville West. Jacobs and the Rams rallied for a 47-34 win. MIKE SIMONS/Tulsa World

Traveling to Wolverine Stadium on Friday night, the Class 6AI No. 2 team again was able to turn up the heat at the most opportune time. Owasso scored the final 28 points — including three touchdowns in the fourth quarter — as it pulled away for a 47-34 win.

“We couldn’t get out of our way in the first half,” Owasso coach Bill Blankenship said. “Then we made all the plays you have to make to get back in a game.”

Quarterback Cole Dugger, making his Ram debut, completed 20-of-30 passes for 327 yards and three TDs. He also ran for a 2-yard score in the final minute of the third quarter that began the comeback.

Special teams were problematic for the Rams throughout the game until Tristan Profit blocked a Wolverine punt early in the fourth quarter. Brendan Dye scooped up the free ball and returned it for a 4-yard touchdown that closed the gap to 34-32.

Profit credited coach Jake Bray with the punt block call and teammates Andre King and Dye with eating up blocks, which enabled him a free run at the punter.

“It worked out perfectly,” Profit said. “Those are the little things people don’t see.”

Running back Isaiah Jacobs ran for 188 yards on 24 carries, including a 61-yard scamper with 9:04 remaining that gave the Rams a lead they would not relinquish.

“We just started to calm down and eliminate the mental mistakes,” Jacobs said of Owasso’s second-half play.

Even with the late surge, the Rams still caught a break when an inadvertent whistle negated a fumble that would have given West possession in Owasso territory with 4:25 remaining.

Instead, the Rams took advantage of their good fortune when they slammed the door on a Wolverine rally after defensive tackle Kameron Bland recovered a West fumble in the end zone for a score with 50 seconds left.

Bentonville West scored three times, aided by a pair of mistakes in the Ram kicking game early in the second quarter, and took a 27-19 lead into halftime.’

AJ Moss blocked an Owasso punt, which teammate Brandon Humes picked up and ran back 45 yards for a touchdown and a 14-6 lead with 6:33 left in the second quarter. A 4-yard Ram punt gave the Wolverines possession at the Owasso 30. On the next play, Luke Miller zoomed 30 yards on a jet sweep for a 20-6 advantage.

“We fouled up some protections and we had a punter (Tate Farley) who had never been in a game,” Blankenship said. “I think that actuated the nerves a bit. Once we got that fixed, Tate did a great job in the second half.”

Owasso answered with two quick scores. Dugger found Kelan Carney for a 47-yard TD strike, followed by a 27-yard pass to Mario Kirby and cut the deficit to 20-19. Jonas Higson gave West the eight-point halftime cushion with a 14-yard run with 14 seconds remaining.

Second half turnaround: Two keys in the Rams rally over the final two quarters were their discipline and defensive adjustments.

Owasso committed eight penalties for 82 yards in the first half. The Rams cut the laundry down to just two flags for 25 yards in the second half.

Bentonville West’s offensive scheme gashed the Owasso defense in the early stages, highlighted by Stephen Dyson’s 76-yard TD catch and Luke Miller’s 30-yard score on a jet sweep, both of which came in the second quarter. Not to mention, QB Dalton McDonald completed 7-of-8 passes for 119 yards in the first half.

After halftime, the Rams slowed down West’s run game and McDonald was just 6-of-13 passing for 74 yards.

“They were showing us looks with their motion that we hadn’t seen,” Blankenship said. “We didn’t solve it on the sideline. It took us until halftime to walk them through what we needed to do…I think (West) coach (Bryan) Pratt does a great job with their offense. They’ve got a lot of speed and misdirection and use it well.”

Turnover battle: Owasso was plus-2 in turnover margin on Friday night. The Ram defense scooped up a couple of West fumbles, both of which led to points, while the offense did not have a giveaway.

DE Haydon Grant ended the Wolverines’ first drive of the game when he recovered a fumble at the Owasso 42 with 9:01 left in the first quarter. DT Kameron Bland, making his first varsity start, iced the Ram victory when he recovered a strip-sack fumble by DE Andre King in the end zone in the final minute of the contest.

"I was kind of confused," Bland said as he recalled the play. "I thought  it was a safety. When I picked up the ball, Dawson (Adams) told me I had scored a touchdown."

Ram captains: Isaiah Jacobs, Mario Kirby and Grant were the three Owasso captains for the coin toss prior to kickoff.

Next up: Owasso will host Fayetteville (Arkansas) in its home opener. The Rams look to avenge last year’s 45-31 loss to the Bulldogs in Arkansas, a defeat that snapped a school-record 10 –game winning streak.

Fayetteville opened its season with a 64-0 thumping of Vianney (Missouri) on Friday.

“We know from last year, they’ve got a lot of talent, especially on the offensive side of the ball,” Blankenship said.

Kickoff for FOR Night is set for 7:30 p.m. inside Owasso Stadium.