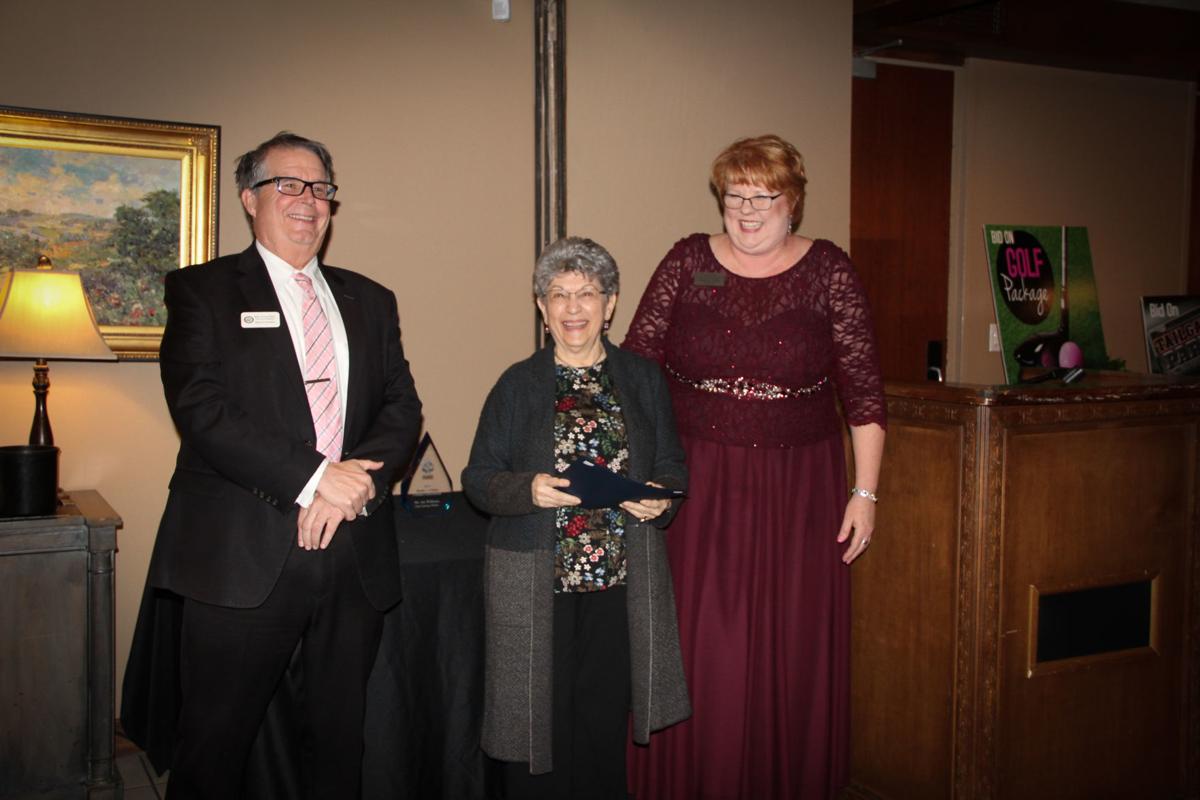 Ellie Costola, middle was named the chamber Citizen of the Year at the chamber banquet Thursday, Jan. 30, 2020 at the Tulsa Country Club. She is pictured with Brian O’Hara, left, and Kristen Cepak. Photo by CASSIE BARNETT 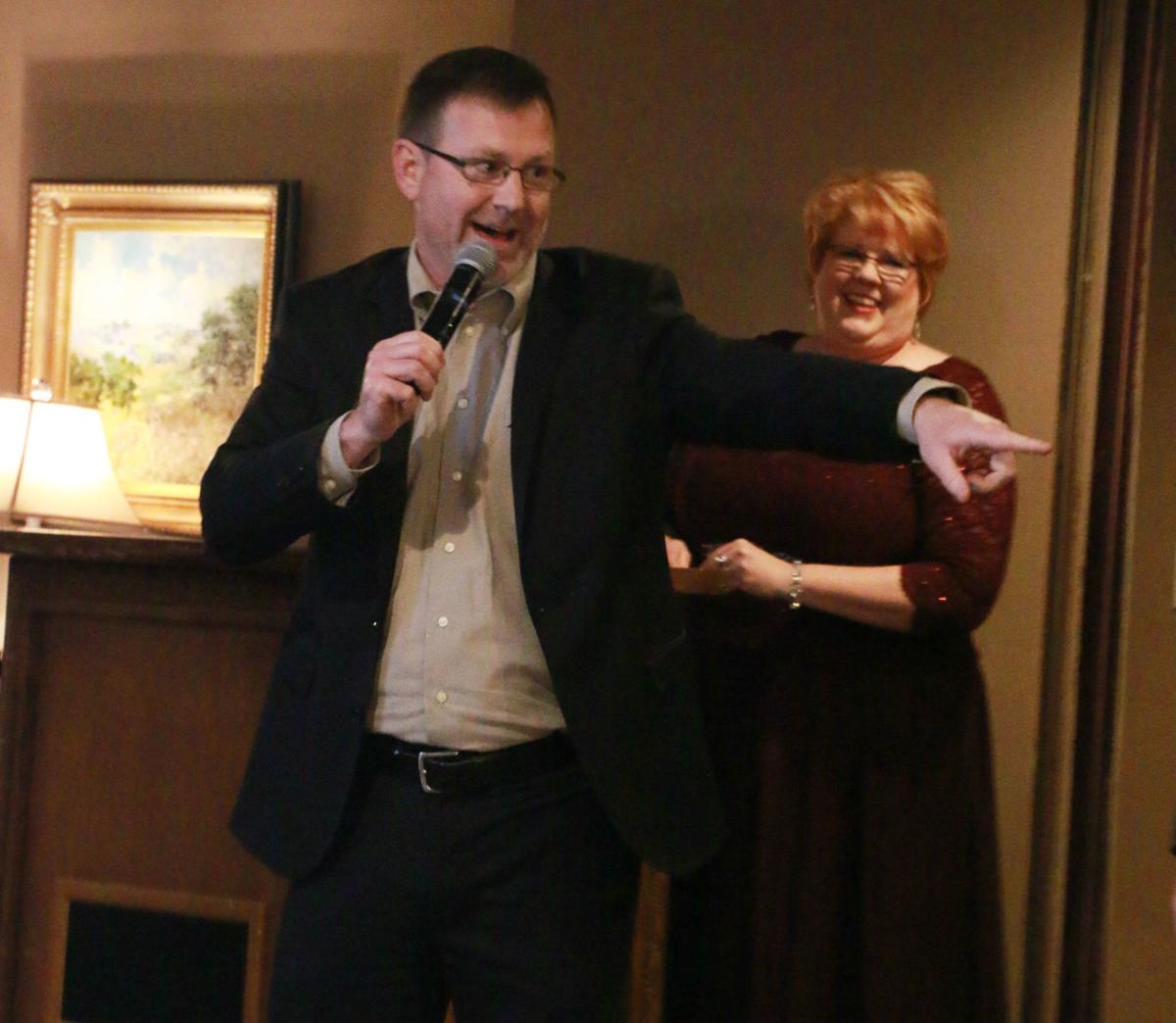 Pastor and auctioneer Brent Kellogg, left, handled the auction that netted the chamber nearly $3,000 at the chamber banquet Thursday, Jan. 30, 2020 at the Tulsa Country Club.

Ellie Costola, middle was named the chamber Citizen of the Year at the chamber banquet Thursday, Jan. 30, 2020 at the Tulsa Country Club. She is pictured with Brian O’Hara, left, and Kristen Cepak. Photo by CASSIE BARNETT

Pastor and auctioneer Brent Kellogg, left, handled the auction that netted the chamber nearly $3,000 at the chamber banquet Thursday, Jan. 30, 2020 at the Tulsa Country Club.

The 2020 Sand Springs Chamber Banquet was held at the Tulsa Country Club Thursday, Jan. 30, honoring some of the hardest working Sandites around.

Chamber President Kristen Cepak handed out her annual awards, but she also announced that she is stepping down and moving to Texas to be with family.

A.C. and Moondogs played music while attendees got settled at their tables. Local insurance agent Alan Copeland, and his family, make up the Moodogs.

There was also a live auction, lead by full-time pastor and unofficially licensed auctioneer, Brent Kellogg. The auction brought in nearly $3,000 for the chamber.

A two-hour live show with A.C. and the Moondogs went for $600, Christmas Light installation with Christ Centered Lawn Care went for $350, and a BBQ Cookout package brought in $740. A golf package with numerous golf courses netted $475, and a Tailgate Party package went for $565.

During the awards ceremony, Brian O’Hara of State Representative Kevin Hern’s Office also handed out congressional honors to each winner.

The Citizen of the Year award went to Ellie Costola. She moved to Sand Springs in 1957 and knew she had come home. In her career, Costola worked for several businesses in the area, including: Vandever’s, Sartain and Fischbein CPA, Mock Bros. Saddlery, PSO Women’s Resource Center, and the Muscular Dystrophy Assoc.

Tamera Ornelas was named the A-Team Member of the Year.

One of the programs the chamber installed in 2018, and enhanced in 2019, is the Ambassador Program, better known as the A-team. They helped with every event during the year, attended every ribbon cutting, and helped out with new chamber members. The A-Team member of the Year requires that they have been named A-Team Member of the Month and selected by their peers within the group for A-Team Member the Year.

Cindy Kerr and Brenda O’Rourke were both named Volunteer of the Year.

Kerr works for American Heritage Bank as the vice president of mortgage lending, and she does everything she can to assist Cepak and her vision for the chamber moving forward.

O’Rourke works for Edward Jones after a long career in advertising and broadcasting.

Church That Matters was named Non-Profit of the Year.

Lead Pastor Rusty Gunn accepted the reward on the church’s behalf, and numerous members of the church attended the banquet, as well. CTM was praised for their efforts during the flood of 2019, their mobile medical center, and a passion to matter to God, each other, and the world.

Barnett has made it his passion to give back to the community he loves. He is a member of numerous organizations that focus on the Sand Springs community such as, The Rotary, Sand Springs Community Services, Salvation Army, the SS Chamber of Commerce, The One Network, and the Sand Springs Local Church Network.

Preston McCurtain, of Dillion Funeral Services, was named Business Person of the Year. He spends his spare time volunteering for the chamber, helping with the Christmas Festival, Chillin’ and Grillin’ and the Chamber Golf Tournament.

BancFirst was named Business of the Year, and BancFirst’s Jerry Franklin accepted the award.

“We are very, very proud to be recognized as the Sand Springs Business of the Year,” Franklin said. ”BancFirst-Sand Springs is a full service bank that provides consumer and commercial products and services throughout Sand Springs and Prattville, where we have a lovely branch, and Tulsa County and the surrounding counties. We’ve been in Sand Springs since about 1963... We have 30 very, very highly-trained and dedicated professionals in our bank here, and we want to serve our customers very, very professionally and diligently and always with a smile on our face.”

The Monte and Betty Box Lifetime Achievement Award, which was introduced last year and given to Monte and Betty that year, went to Joe Williams, of the Sand Springs Home.

He is a past President of the Lions Club, Chamber of Commerce and Sand Springs Education Foundation. He served four years as chairman of the Sand Springs Salvation Army and as a past director of the Herbal Affair and Festival.

Williams was appointed as a trustee of the Sand Springs Home in 1965 and he continues to serve in that capacity.