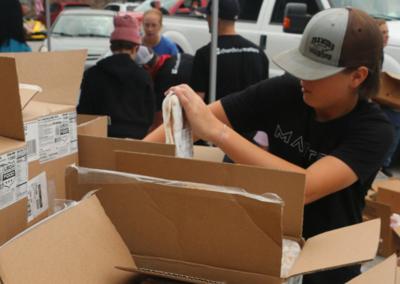 Church That Matters uses the slogan “Matter Today” and that’s exactly what they did Saturday, May 16.

The Church, pastored by Rusty Gunn, held a “Quarantine Cook-off” and gave away thousands of pounds of meat to area residents.

Located at 41st street and Highway 97, cars were line up down 41st all the way down to the bridge on HWY 97. Over 1,000 cars drove through two lines at the church and some lined up at 8:30 a.m. The event started at 11 a.m. and the church was completely out of meat by 2 p.m. There were huge pallets of chicken just waiting to find a home.

“The Quarantine Cookoff idea came after we received word of a donation from Tyson Foods of 1,400 pounds of chicken,” Gunn said.

“We normally would have distributed it to individuals but this was coming packaged for institutional use frozen together in 40-pound boxes. No one has room for 40-pound boxes of frozen chicken in their freezer. So, we reached out to our friend James Hendricks with Bad Moon Smokin’. He had helped us with preparing pulled pork sandwiches to give away a few weeks earlier and was eager to do more for our community. He reached out to some of his friends in the competition barbecue community and we ended up with six professional competition teams. We made it fun with a little friendly competition where the people who came through for food were able to vote online for their favorite. Bad Moon Smokin’ won the prize and was awarded a $500 check, which they contributed back to the cause, and a Quarantine Cookoff Championship certificate.

The Quarantine Cook-off pitted six grilling teams against each other, and they used the meat donated to the church. Anyone that attended could pick up a hot meal from the grillers and frozen groceries from the church. The church provided everything for free.

“Every person who came through was prayed for and given the opportunity to share their own personal prayer requests as well. We were honored to lift them up to the Lord’” Gunn said.

People didn’t need to wait long but there were things to do while they waited. There were balloon animals for the kids, and a dunk with Sand Springs Public Schools Superintendent, Sherry Durkee, Gage Gunn, and Leader editor Kirk McCracken. From their cars, participants shot a tennis ball gun at the dunk tank target instead of throwing balls at the target like at a carnival.

“It’s always an awesome experience being able to help others help our community,” said Rib Crib’s Cody Worrell. “Cooking some good barbecue alongside other barbecue teams is fun in itself, but to be able to provide for needs in Sand Springs has greater rewards. Rib Crib has always given me the opportunity and vehicles to assist our church and other local organizations in these types of projects, of which I’m grateful. Hanging out with our church family and other great people is a plus.”

The Sand Springs Chamber of Commerce holds its Chillin’ and Grillin’ barbecue competition every year but it had to be cancelled due the virus. The Quarantine Cook-off was able to take its place this year.