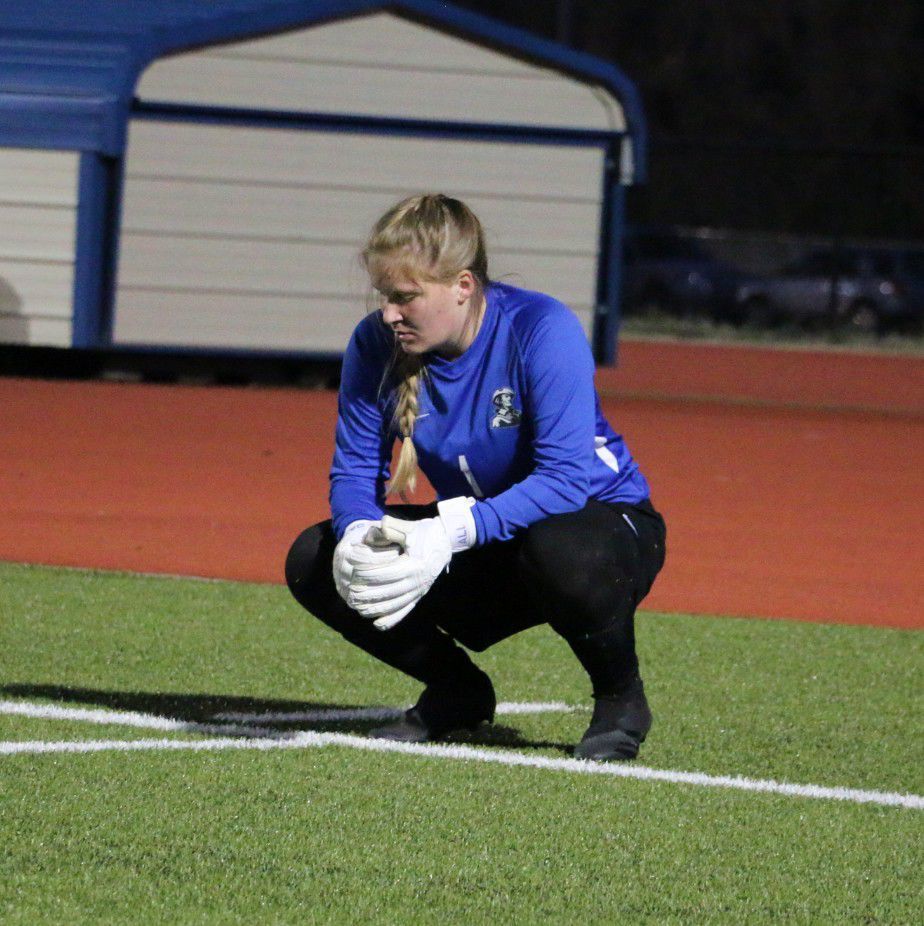 Goalkeeper Ali Day gets mentally ready before a shootout with Sapulpa. KIRK MCCRACKEN/Leader 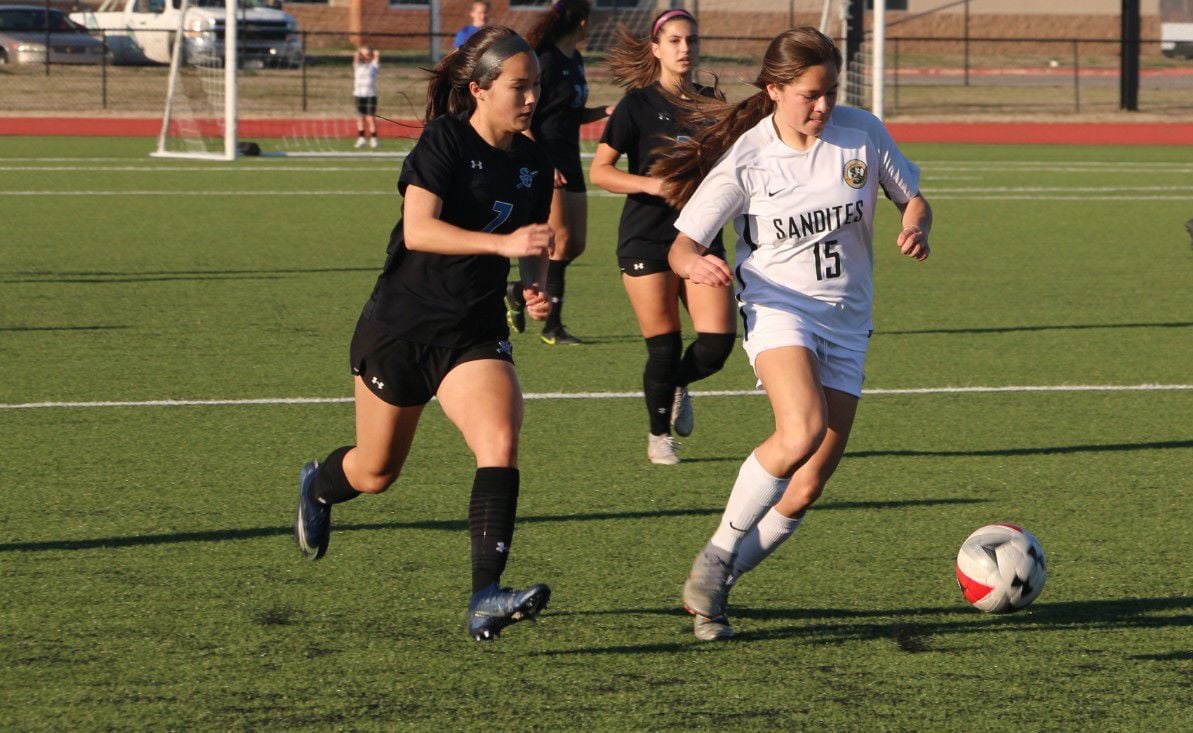 Sand Springs’ Teagan Smith, right, dribbles down the middle of the field against Sapulpa March 10, 2020 at the Westside SOccer Complex in Sapulpa.”KIRK MCCRACKEN/Leader 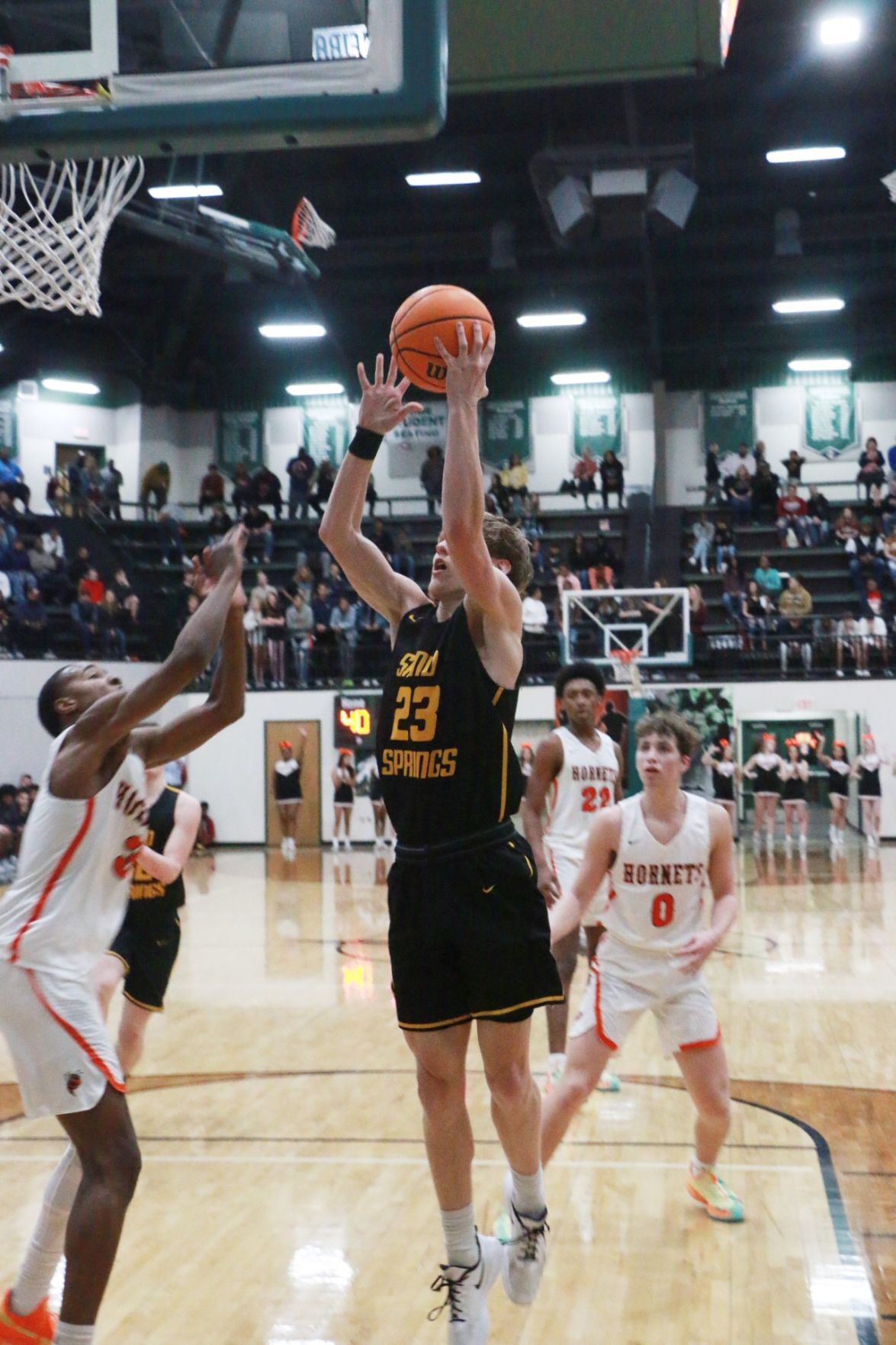 Goalkeeper Ali Day gets mentally ready before a shootout with Sapulpa. KIRK MCCRACKEN/Leader

Sand Springs’ Teagan Smith, right, dribbles down the middle of the field against Sapulpa March 10, 2020 at the Westside SOccer Complex in Sapulpa.”KIRK MCCRACKEN/Leader

Here’s a list of the Sand Springs sports that were still playing when their seasons were cancelled, indefinitely.

In the area tournament, Sand Springs fell to No. 1 Booker T. Washington, 66-60, and beat Owasso, 64-50, in the area consolation championship. That set up a first-round match-up with Midwest City, and that game is yet to be played.

The Sandite girls team (15-8) lost to Broken Arrow in the first round of regionals, ending their season a two weeks before the coronavirus outbreak.

Girls Soccer (2-1): The varsity girls soccer team was only three games into the season when the Oklahoma Secondary Schools Athletic Association decided to halt all high school sports.

The Sandites are 2-1 on the season and needed a shootout in two of the three games played. Karsen Lynch and Julia Wolfe are both leading the team in scoring with three goals each, and Ari Esparza is right behind them with two.

The girls started the season with a 2-0 loss to Bartlesville but turned around and beat Sapulpa in a shootout, 4-3. Goalkeeper Ali Day came up big in the Sapulpa and Muskogee shootouts.

Boys Soccer (2-1): The boys soccer team started the season a lot like the girls team with a season-opening loss and a shootout-win in game two with Sapulpa. The boys ended with a 6-1 win over Muskogee before the cancellations.

Jack Bratcher, who scored three against Muskogee, is leading the team, along with Fernando Saldana, with five goals each. Luke Jeffus has three goals.

Track and Field: Both Charles Page High School track teams finished up with 22 points apiece at the Union Invitational last week. For the girls, Erika Baker finished fourth in the 3,200-meter run at 13:10. Holland Hall’s Libby Rowland was the event winner at 12:18. In the girls long jump, Sand Springs’ Journey Armstead finished fifth at 14 feet, 5 inches. It was Broken Arrow’s Kyra Heald with a winning jump of 16 feet, 10.5 inches. On the boys side, Sand Springs’ Riley Magee put forth the team’s best performance of the day in the discus with a throw of 135 feet, 6 inches. Only Holland Hall’s Owen Ostroski finished ahead of him with a toss of 150 feet, 3 inches

Slow-pitch Softball (1-0): The Sandite girls got a game in before the cancellations. Charles Page High School started out the slowpitch softball season with a 20-1 blowout victory over Highway 97 rival Sapulpa. Jaden Jordan led the offensive onslaught with five runs batted in for the Sandites, who saw nearly every batter in the lineup scored at least one run. Jordan, Lauren Hammock, Avery Tanner, Brooklyn Harper, Taylor Skipper and Makenzie Burks all scored two runs apiece, while Madison Lee and Nataley Crawford scored three times each.

Golf: The Sand Springs golf teams have been busy since the first of the season, and girl’s standout, Meghan Charles, has been impressive. On Thursday, March 11, Charles placed first at the Class 6A East Regional preview, shooting an 82. The regional was played at the Ponca City Country Club.

Tennis: The tennis teams have played in a few tournaments but the season was practically over before it began.