An angler lays a tape measure along the length of a striped bass for entry into the All Fish All Oklahoma Fly Fishing Challenge. 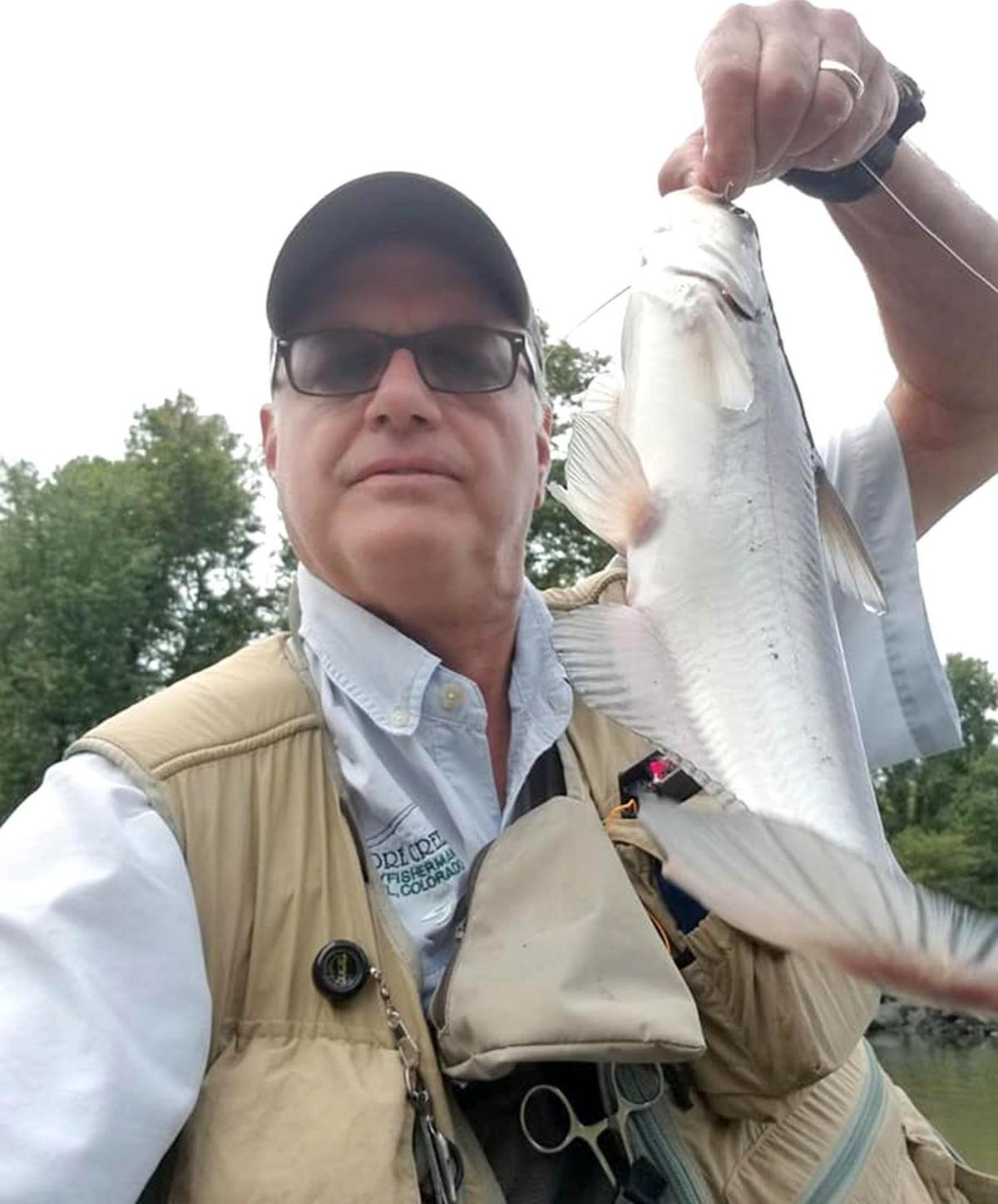 Angler Scott Hood with his final entry into the All Fish All Oklahoma Fly Fishing Challenge in 2019, a channel catfish. SCOTT HOOD/Courtesy

Oklahoma’s sunfishes can give anglers fits as they try to identify the species when they are in-hand from left here are redear, bluegill, longear, and green sunfish. USFWS/DUANE RAVER/Courtesy

An angler lays a tape measure along the length of a striped bass for entry into the All Fish All Oklahoma Fly Fishing Challenge.

Angler Scott Hood with his final entry into the All Fish All Oklahoma Fly Fishing Challenge in 2019, a channel catfish. SCOTT HOOD/Courtesy

Oklahoma’s sunfishes can give anglers fits as they try to identify the species when they are in-hand from left here are redear, bluegill, longear, and green sunfish. USFWS/DUANE RAVER/Courtesy

Last summer I didn’t catch wind of the inaugural All Fish All Oklahoma Fly Fishing Challenge until it was too late. This year, I’m signed up and ready to roll, and I’m recommending it to anyone else who is game.

The tourney challenge is to catch 15 different fish species in 15 weeks, all caught on artificial flies and on a fly rod in Oklahoma. It’s a fundraiser for Oklahoma Trout Unlimited Chapter 420, but mostly it’s about having fun and learning, according to fly fisher and past holder of almost all local Trout Unlimited volunteer positions at one time or another, Scott Hood.

He came up with the idea last year and had help from member Kelly Brown, who added team entries to the challenge. Folks can enter individually or as a team of four with each member contributing at least three different species to the effort. Entry is $25 for individuals or $100 for a team.

“We don’t make much money with it, but it’s fun and it’s educational. It’s all about how many different fish you can catch fly fishing in Oklahoma,” Hood said.

The tournament starts at 12:01 a.m. on May 23 and ends in September. Later entries are OK, but it’s probably a good idea to get in early. Hood fishes nearly every week and catches channel catfish inadvertently on a fairly regular basis. I’ve personally witnessed this. But with just two weeks left in the challenge last year, what did he lack? A channel catfish.

“I put on way too many miles trying to catch a catfish last year,” he said. “I went to one place and I caught a largemouth bass and I caught bluegills, but could I catch the channel catfish I could actually see swimming around in the pond? No.”

He did eventually get his channel cat and his 15, but he didn’t win.

The winner gets half the pot and a mahogany trophy that features a tarpon — which is a reflection of the humor and fun with which one should enter this effort. For non-anglers, a tarpon is a saltwater trophy fish that lives nowhere near Oklahoma. Brown won the inaugural event. His name was drawn from among the seven anglers who did manage to complete the challenge.

Clary needs to start this year’s challenge with a target on his back after that showing. A tiny-fish jinx upon him for every time someone reads this and says the words “anyone but Clary.”

See, I’m having fun at this already.

Entrants have to have a Facebook account so they can join the Facebook page group named for the challenge, pay the entry fee online and post their catches to the page within a week of each catch.

Big-fish entries can be “extra” catches and don’t have to be a part of an angler’s original 15. Entrants have to send in a photo of their fish entries like a selfie with the fish clearly identified or with an ID tag specific to the angler. For big-fish entries the photo needs to include a measuring tape or other measuring device along with the angler’s ID — or perhaps a tag that just reads, “anyone but Clary.”

If you’re not sure if your fish is a redear or a longear or a sand bass or a hybrid, don’t worry, the group will help you figure it out if you have good photos. So, it’s important to get good photos to ID your fish. They had a lot of fun last year figuring out the identities of some of the sunfishes, of which there are hybrids that do not count.

Places where fish are caught have to be listed but folks don’t have to give up their honey holes. “Arkansas River,” or something like “private pond near Bristow” are specific enough, Hood said.

Hood caught some sunfish in Mingo Creek and handled it all with one deftly captured selfie. It was some impressive high quality expert competition-level angler material, let me tell you. The tiny bluegill, the fly rod, the expressway signs, Hood’s somewhat out-of-focus face; the composition and angle of view made it delightfully utilitarian.

Seriously, I am looking forward to the challenge, learning more about how people catch all the different species and sharing it with readers.

Honestly and humbly, just catching 15 different species will be a big goal for me. Getting drawn as the winner would just add a mahogany tarpon to the cake, and of course winning one of the big fish categories could make me “anyone but Clary.”

Oh, this is going to be fun.

The All Fish All Oklahoma Fly Fishing Challenge begins May 23 and runs 15 weeks.

Winner splits the pot and will be drawn from a list of those who complete the challenge.

All fish must be legally caught in Oklahoma on artificial fly and fly rod with photographic proof and location listed. The honor system is heavily in play.

Sign up through the Facebook group page All Fish All Oklahoma Fly Fishing Challenge or find links for information at TU420.com