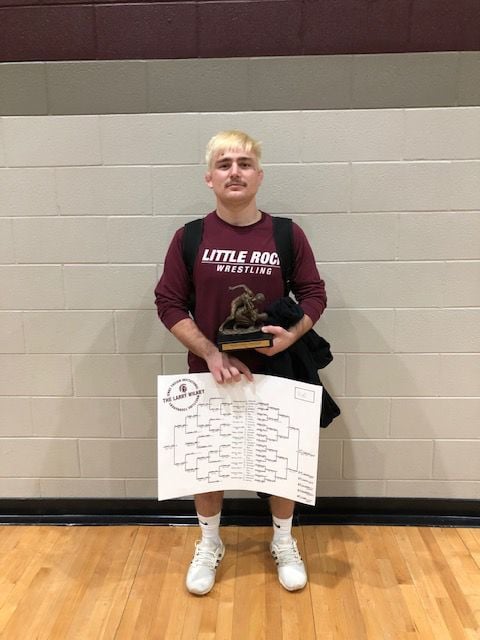 The 5A #1 Skiatook wrestling team traveled to Jenks to wrestle in the Larry Wilkey Invitational. The Bulldogs had high expectations for this tournament as they have won it the previous two years.

After day one the Bulldogs were sitting on top of the team scores with a commanding ninety point lead and had eight wrestlers in the championship finals with five still alive on the consolation side fighting for a placement spot.

After all the wrestling was over on Saturday, the Bulldogs crowned three Champions: 106lb Brody Gee, 113lb Josey Jernegan, and 160lb Cougar Andersen who was also named the tournament’s most Outstanding Wrestler.

The Bulldogs also won the team championship for the third year in a row with 260.5 team points in front of second place Jenks with 195.5 team points.

Brody Gee, the number one seed at 106lbs, pretty much dominated his opponents on his way to winning the championship. In the second round Gee wrestled Scot from Southmoore and came away with a quick pin in just fifty-nine seconds of the match.

In the quarterfinals Gee wrestled Hilton from Mannford. Gee, again wasted very little time in pinning his opponent with a fifty-three second fall in the first period sending the sophomore to the semifinals.

In the semifinals the Bulldog wrestled Genzer from Westmoore. Gee dominated Genzer and came away with a nineteen to four technical fall putting the mighty Bulldog in the finals.

In the championship, Gee again was able to produce bonus point with a ten to one major decision over Bartlesville’s Colby Strachan. With that win the young Bulldog was crowned the 2020 106lb Larry Wilkey Invitational Champion.

Josey Jernegan, at 113lbs, was able to pin his way in to the finals with four falls. In the first round the young Bulldog pinned Wilson from Pryor late in the first period advancing him to the second round. In the second round Jernegan faced Yukon’s Butcher and pinned him in just seventeen seconds.

In the quarterfinals the freshman pinned his opponent, Ballard from Southmoore, in under a minute at the fifty-seven second mark putting the mighty Bulldog in the semifinals.

In the semifinals Stokes from Newcastle decided to try the freshman out, but the young Bulldog had nothing to do with him as he pinned the Racer in the second period advancing to the championship.

In the championship the number six seed Jernegan would go toe to toe with the number one seed, Yukon’s Mahaffey. The Yukon Miller tried his best to knock off the young Bulldog, but Josey puffed his chest out and came away with a 11 to 8 decision to become the 2020 113lb Larry Wilkey Invitational Champion.

Cougar Andersen, the 160lb number one seed, coasted to the finals with two falls and two major decisions.

In the first round Andersen pinned Webber-Lund form Putnam City early in the second period. The second round produced another fall for the Bulldog at the one minute thirty-five second mark of the first period against Chamblin from Shawnee.

In the quarterfinals, Andersen came away with an eleven to three major decision over Jenks’ Bryce Fisher advancing him to the semifinals.

Andersen, in the semifinals, dominated his opponent once again with an eleven to three major decision over Davis from Enid. Drake Vannoy from Jenks stepped out on the mat with the mighty Bulldog in hopes of claiming the championship in his home town. Although it was a battle between a couple of 2X state champions, the match was really dominated by the Bulldog. Andersen was able to come away with an eleven to six decision on his way to becoming the 2020 160lb Larry Wilkey Invitation Champion for the second year in a row. Andersen was also named the tournament’s Most Outstanding Wrestler.