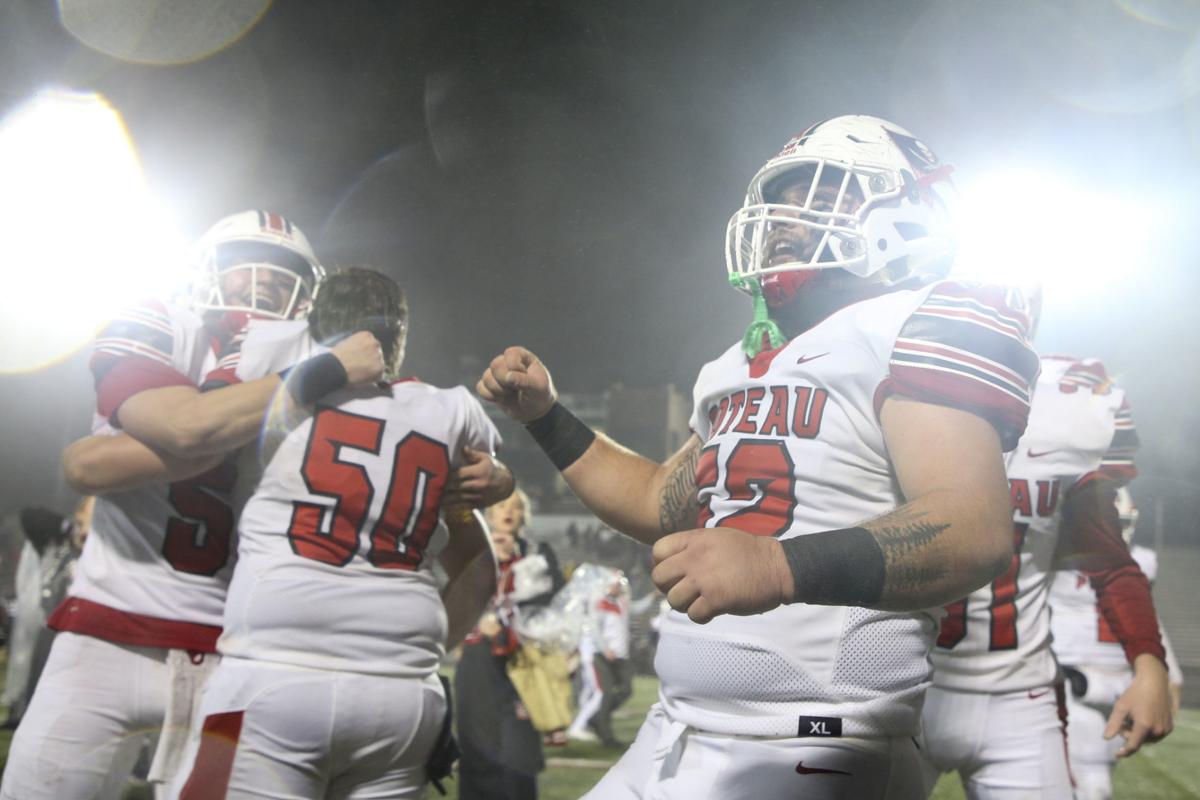 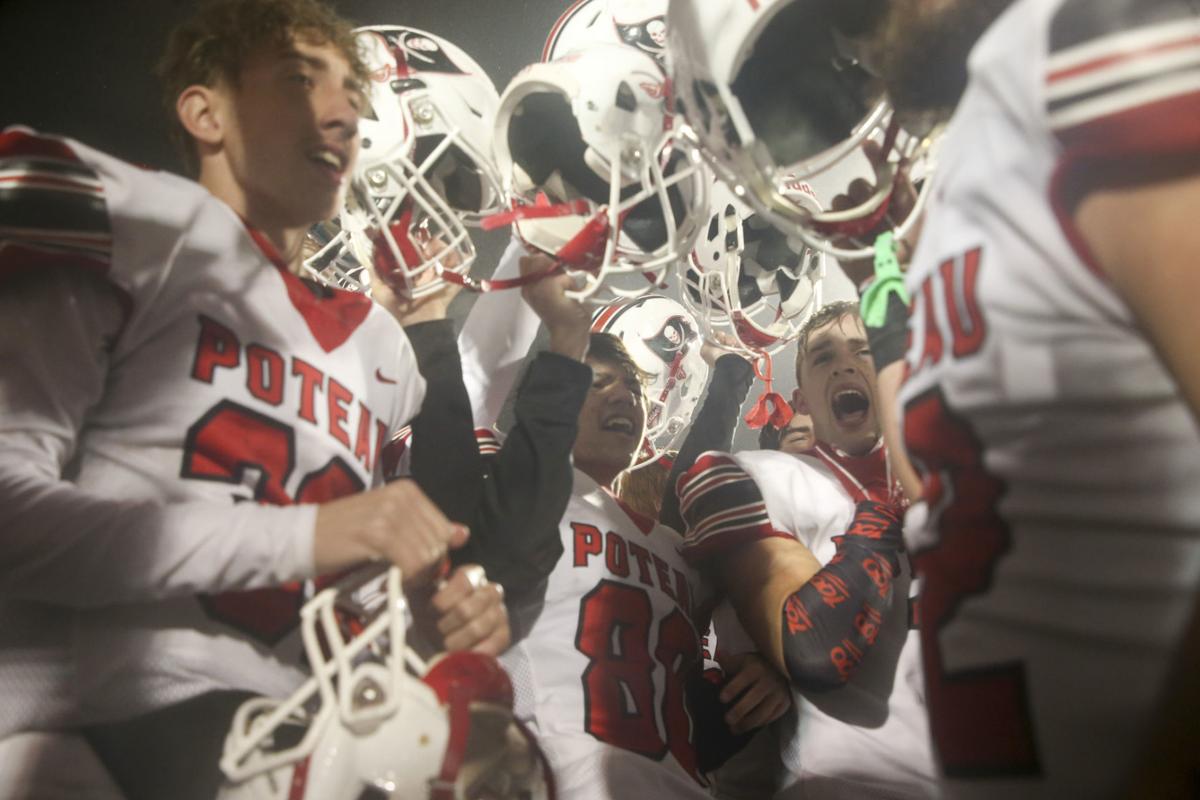 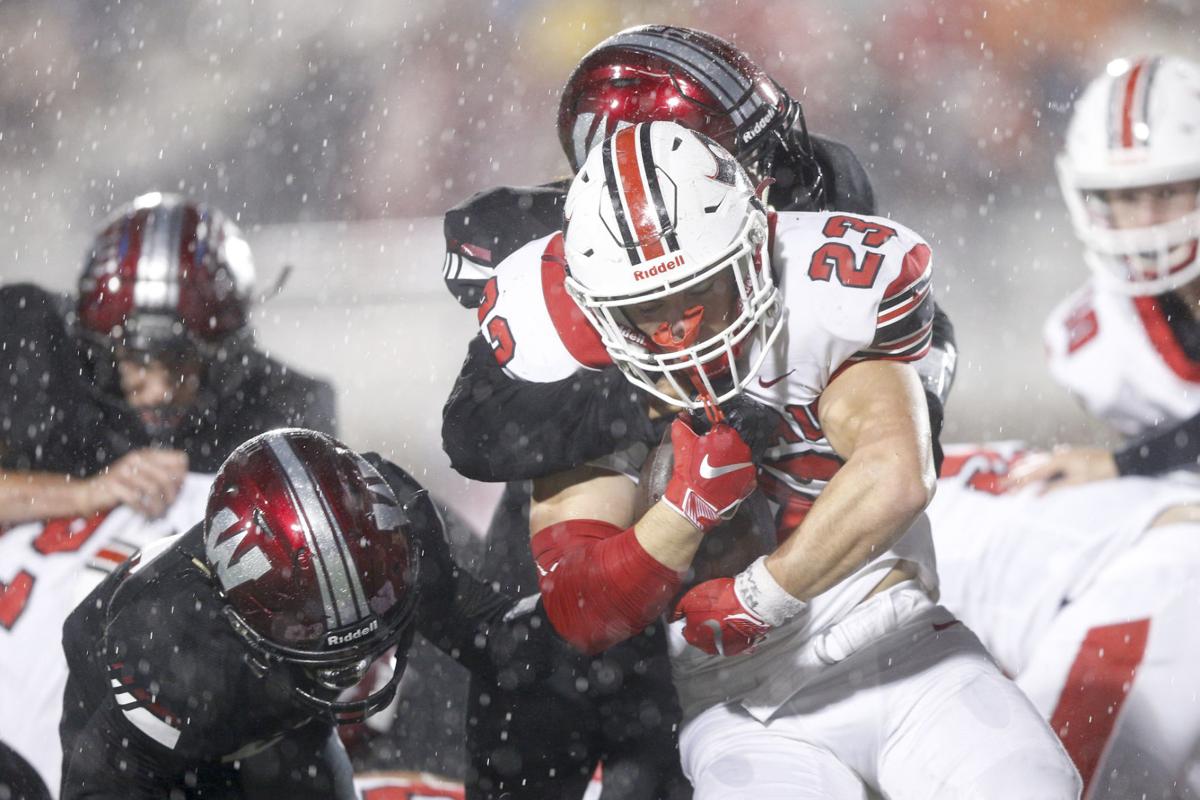 Poteau’s Mason Barcheers was hard to stop for tackler Marcus Newton and the Wagoner defense during the Class 4A state semifinal game at Jenks High School on Friday night. Poteau won, 7-3. 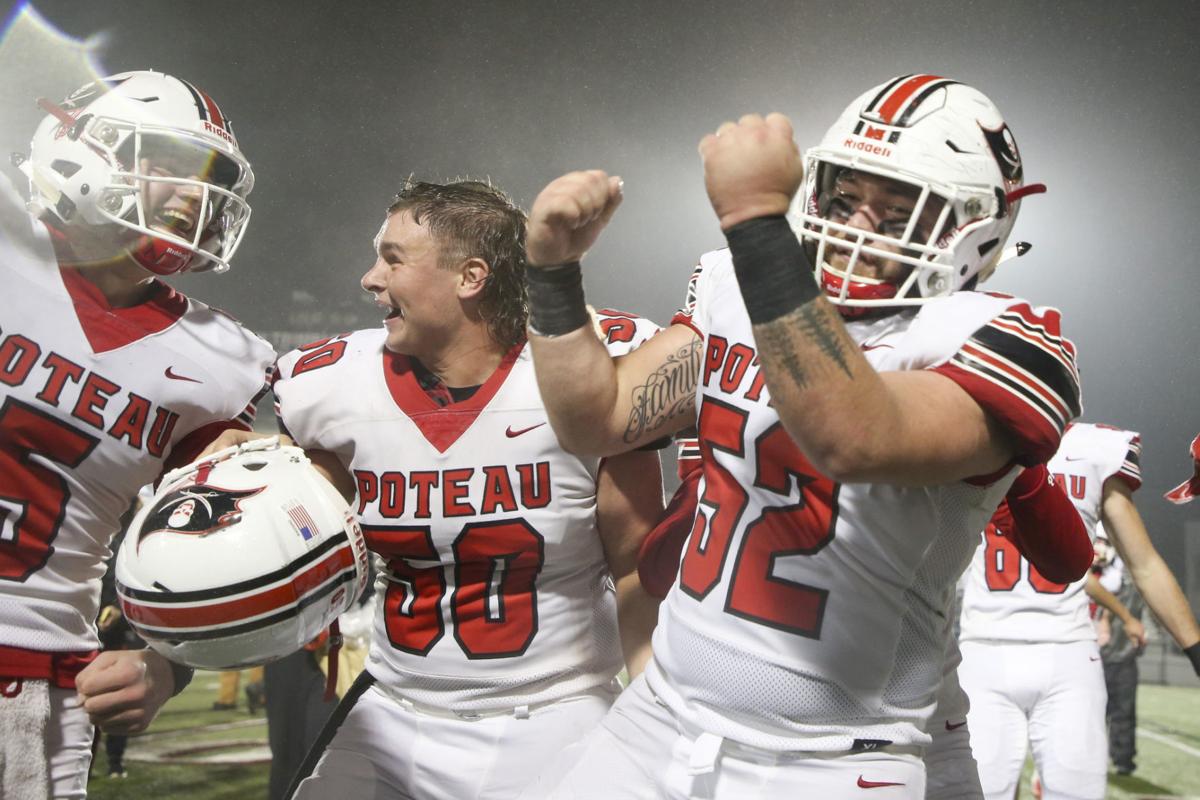 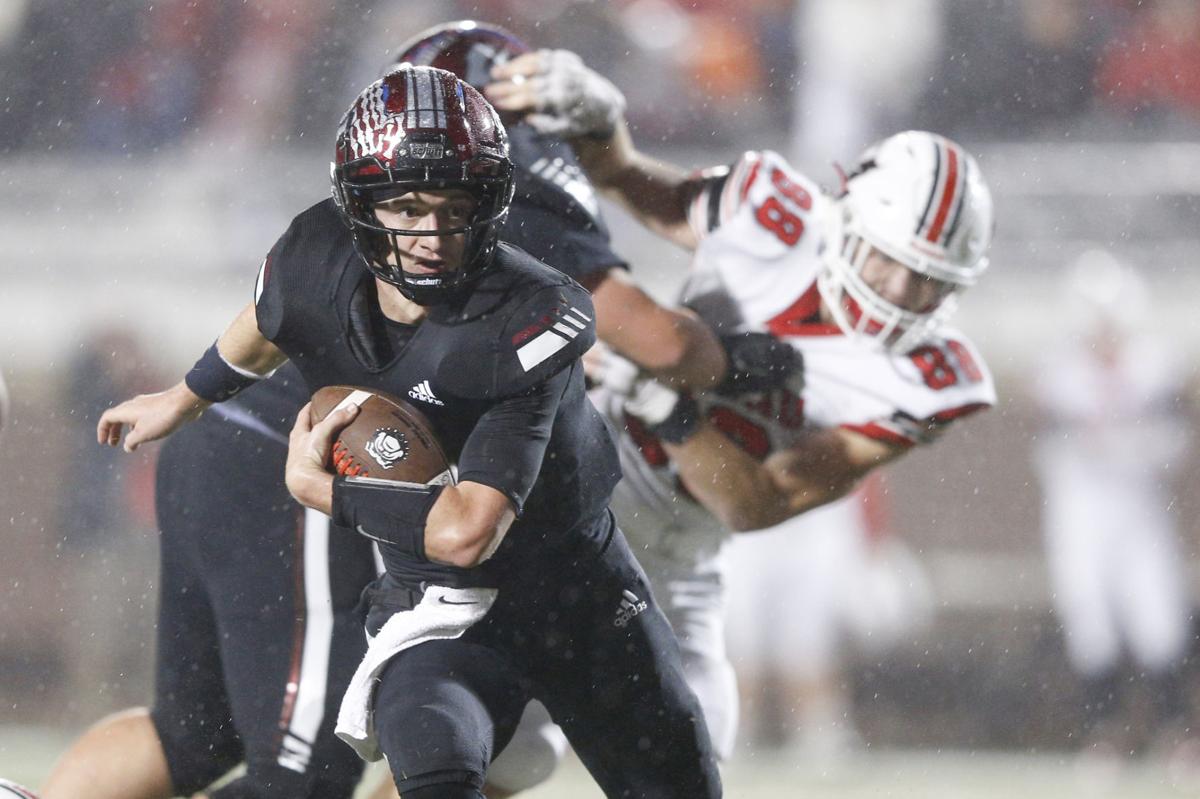 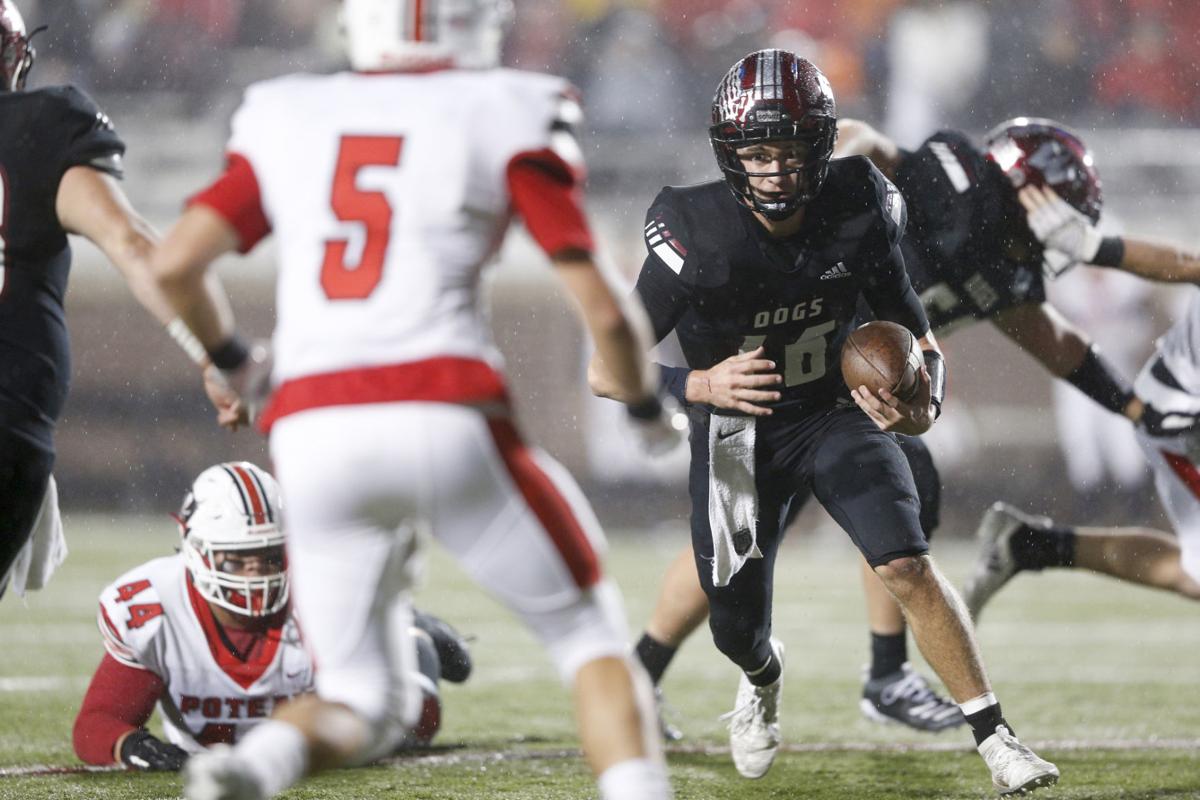 Poteau’s Mason Barcheers was hard to stop for tackler Marcus Newton and the Wagoner defense during the Class 4A state semifinal game at Jenks High School on Friday night. Poteau won, 7-3.

JENKS — Poteau demonstrated again the adage that a strong defense and running game can take a team a long way in the playoffs, especially when there are cold and rainy conditions.

And it also doesn’t hurt to be able to execute a trick play.

Mason Barcheers had 24 rushes for 131 yards, noseguard Vaka Tuifua delivered an impressive run-stopping and pass-rushing presence, and a key fake punt helped lead third-ranked Poteau past No. 4 Wagoner 7-3 in the Class 4A semifinals Friday night at Allan Trimble Stadium.

The Pirates (12-1) advance to meet No. 5 Weatherford (11-2) in the title game at 1 p.m. next Friday at the University of Central Oklahoma’s Wantland Stadium. Poteau, looking for its first state title, returns to the championship game for the first time since 2013.

Wagoner led 3-0 at hafltime, but Poteau’s defense, ranked No. 1 in 4A, set the tone for the second half by forcing the Bulldogs (10-3) into a three-and-out and then the Pirates drove 76 yards in 18 plays — half of them carries by Barcheers.

“He took over the game,” Poteau coach Greg Werner said about Barcheers.

The drive that took 8:28, however, was sparked by quarterback Easton Francis’ 15-yard completion to Colton Williamson on a fourth-and-1 fake punt from the Poteau 33. Earlier in the game, Francis was intercepted by Drew Mills, also on a fake punt.

“You’ve got to do some crazy things to win a game,” Werner said. “(Assistant) Coach (Mike) Odom, that guy is a master on fake punts.”

Francis added about the successful fake punt, “I figure we should take our chances, it’s the last game, it’s all or nothing right now. I thought we would try it since we hadn’t run that one in an actual game. It helped us out, it was a momentum switch.”

Jayden Mankin capped the drive with a 3-yard TD run on a sweep with 1:54 left in the third.

Wagoner had one scoring threat in the second half as Marcus Newton’s 17-yard punt return plus a Poteau personal foul penalty enabled the Bulldogs to start their final possession at the Pirates 34. But the Bulldogs turned the ball over on downs as they went four-and-out.

“We were just trying not to panic,” Tuifua said. “We just had to do what we do best and that’s play defense.”

The Pirates then ran out the final four minutes.

Poteau gained 242 yards and held Wagoner to 107 on a cold night that included heavy to moderate rain throughout the game. The start was delayed one hour due to lightning in the area.

Wagoner’s points came on Jaden Snyder’s 29-yard field goal with 8:44 left in the second quarter, set up by Mills’ interception at midfield. Poteau’s best scoring chance in the first half ended when Wagoner’s Logan Cole recovered a fumble on a sack at the 50.

“I thought both defenses played a tremendous game,” Wagoner coach Dale Condict said. “Their defense really stymied us. They made us try to find ways to move the ball and we just couldn’t. I feel bad for our guys, our defense fought real hard tonight. We shut down an offense that was very potent all year. Our defense played well enough to win, we just didn’t do enough on offense. Their big noseguard (Tuifua) is a tremendous player.”