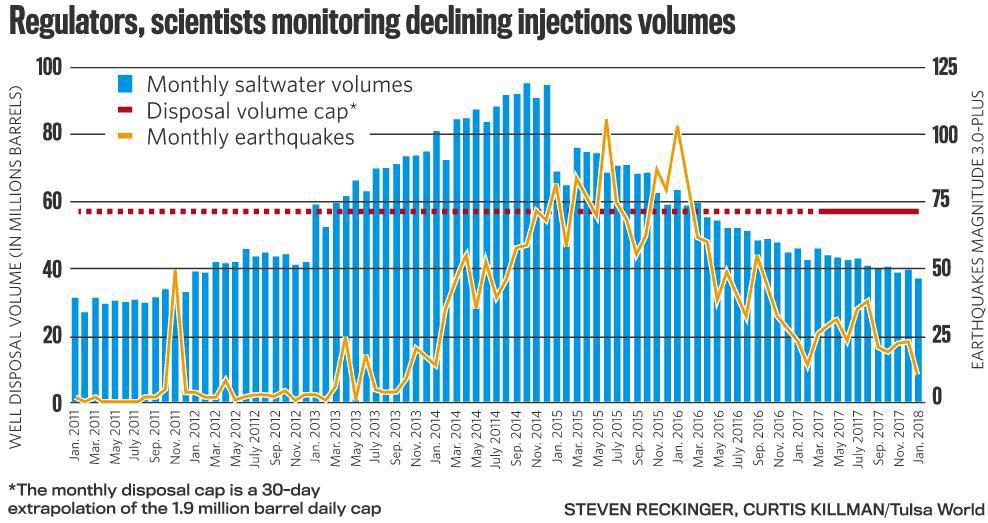 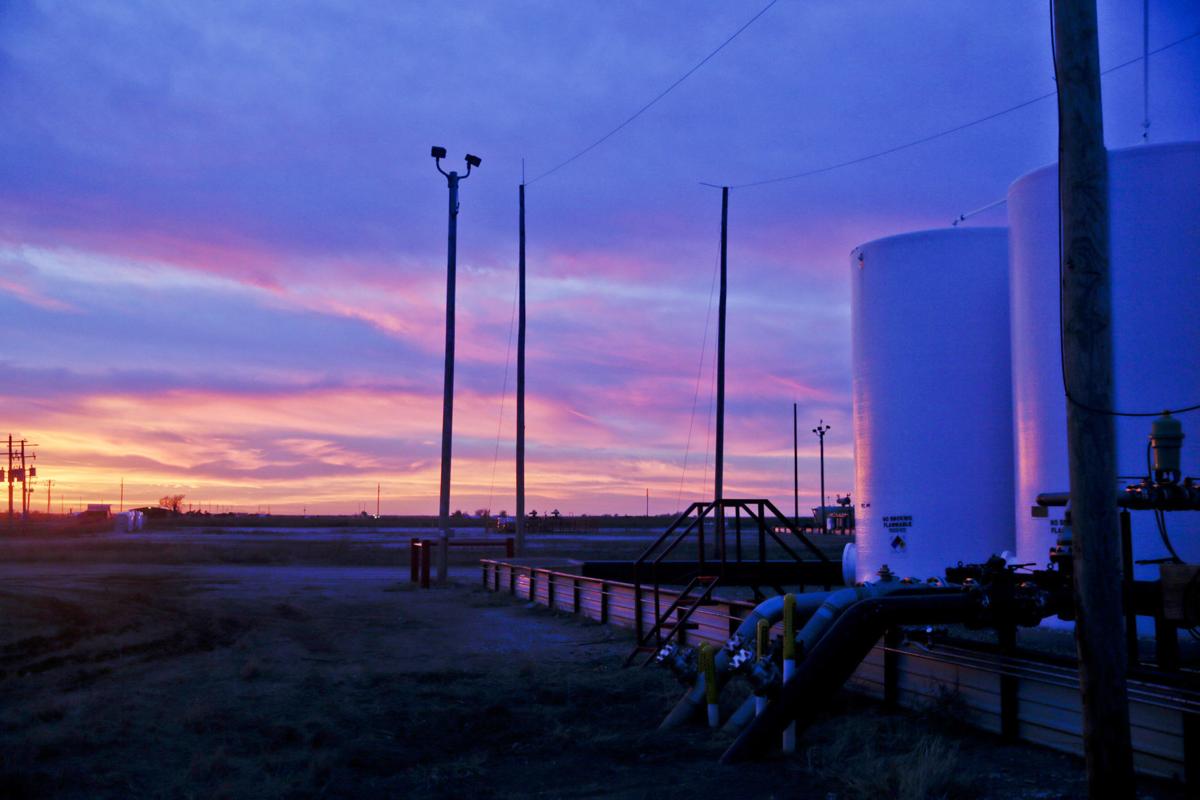 The possibility of increased production is raising concerns that higher volumes of wastewater injections could increase earthquake activity in Oklahoma. IAN MAULE/Tulsa World

The possibility of increased production is raising concerns that higher volumes of wastewater injections could increase earthquake activity in Oklahoma. IAN MAULE/Tulsa World

Earthquake analysis: See which companies have injected billions of barrels of wastewater into the ground

If oil and natural gas prices begin to soar, wastewater injection linked to Oklahoma earthquakes could climb 40 percent more under a regulatory cap — a disposal level that also happens to be 40 percent shy of the record but would still be a historically large volume.

A year ago state regulators implemented volume limits on the deepest disposal wells in a 15,000-square-mile area prone to earthquakes. But the question lingered of how much injection volumes might increase under the overall threshold if production were to ramp up in the event the crude oil market approached $100 a barrel, such as the $105 peak in June 2014 before the bust.

After a request by the Tulsa World, the Oklahoma Corporation Commission provided an overall daily cap of 1.9 million barrels, or about 57 million barrels in a 30-day period.

Injection was about 37 million barrels in January, or about 1.1 million per day, according to OCC data analyzed by the World. Peak monthly disposal happened in October 2014 at 95.4 million barrels, or about 3 million a day.

Not coincidentally, the monthly rate of magnitude 3.0-and-higher quakes was highest in June 2015 with 104, then again in January 2016 with 103. Research has found a months-long delay between injection and felt seismicity, with disposal rates and cumulative volume playing roles.

There were 10 such quakes in January; a number that low hadn’t been seen since October 2013, when nine quakes measuring at least 3.0 were recorded.

Oil and gas drilling operations in Oklahoma have migrated to petroleum basins in the SCOOP and STACK plays, a 12,500-square-mile region south, west and northwest of Oklahoma City. This area is separate and distinct from the 15,000-square-mile area in central and northwestern Oklahoma covered by disposal volume limitations where the majority of the state’s quakes occur.

So the question of how much production might return to central and northwestern Oklahoma is open.

“It is a definite concern with a lot of unknowns,” said Jake Walter, state seismologist with the Oklahoma Geological Survey.

Walter said there could be “some immediate production capacity” increases if a number of operators have shut in wells to wait for better market prices. But, he added, with a typical decline in a well’s hydrocarbon production lifespan it may take new drilling for substantial volume increases in the event of a more robust market.

The Corporation Commission said it hasn’t approved a new disposal well in the Arbuckle formation — Oklahoma’s deepest geologic formation — in the Area of Interest for approximately two years.

Broadly, Walter noted that less saltwater disposal across Oklahoma has led to a statewide decrease in seismicity rate. So in a general sense, less overall disposal should reduce the quake rate and the chance that any of them are large and damaging, he said. That is unless an overall reduction within the state results in a shift that increases disposal in a specific area, he added.

To monitor that concern, Walter said the OGS reports each month’s earthquake activity during monthly meetings of the Governor’s Coordinating Council on Induced Seismicity. Those data are compared with wastewater injection in “geologically distinct zones” across the state, which the Corporation Commission uses to decide if more reductions are necessary, Walter said.

Walter said OGS can’t prescribe exactly where wastewater should be disposed of because scientists don’t know where all the faults are in Oklahoma that are critically stressed.

“The seismicity rate in the state suggests there is a significant chance, though decreasing, of a magnitude 5-or-greater earthquake in the next year,” Walter said. “This comes from our understanding of the statistical distribution of earthquake clusters — the science suggest that the seismic hazard is high.

“If the seismicity rate does not continue to decline, it would be warranted for the OCC to take further action.”

Matt Skinner, Corporation Commission spokesman, said no one is talking about lowering the volume cap, but “nothing is carved in stone.”

Skinner said regulators aren’t looking at the overall cap so much as tracking regional issues, as Walter addressed in his comments.

Skinner also said regulators are looking at how volumes are being injected — are operators “pulsing” disposal wells with sharp injection gradients or running “smooth and steady.” He said research points to “pulsing” as a potential seismicity problem, though there is some disagreement.

Kim Hatfield, vice chairman of Oklahoma Independent Petroleum Association, said that an oil market upswing to about $100 a barrel probably would increase to “some degree” production in the northern part of the Area of Interest. But the majority of activity would be in the SCOOP and STACK because of the economics of having much less saltwater in those shale plays, he said.

Hatfield added that one advantage the industry has now over the past is pressure monitors in 14 Arbuckle wells in a broad area of the AOI for research. He said pressure has decreased in 12 and remained static in two.

“If there was an uptick in injection, if it was enough to cause an increase in Arbuckle pressure, which is posited as a trigger for seismicity, then we would see it and be able to act before we saw an increase in seismicity,” Hatfield said.

The drilling industry deals with saltwater that comes up with hydrocarbons out of the producing formation by injecting it back underground, the most cost-effective method for dealing with the fluids.

The widely used Arbuckle formation was targeted for disposal for its distance from groundwater sources and because its porous makeup allows for large injection volumes. However, it is hydraulically connected to the state’s “basement” layer of granite that is riddled with critically stressed faults from natural tectonic energy.

While the earthquake rate has continued to drop off, along with the seismic risk, the potential for a damaging quake remains much higher than average. Oklahoma’s historic tectonic level is about two felt quakes a year.

Walter is a co-author of a study published in August in Science Advances, which noted there is no evidence to suggest the state will revert to pre-2009 seismicity levels by 2025.

The research analysis found a 37 percent to 80 percent probability of a 5.0-or-stronger earthquake in 2017. That probability range in 2025 is still elevated at 5 percent to 40 percent, with the possibility the model used may be underestimating the chance of future damaging earthquakes.

The United States Geological Survey reported the first tremor shortly before 5:20 p.m. It was centered 11.4 miles northeast of Enid in Garfield County. The second hit at 9:40 p.m., and no injuries or damage were recorded after either.

Shaking could be felt in downtown Tulsa. Residents of Broken Arrow, Eufaula, Turley, Norman, Oklahoma City and Braggs wrote on social media that they could feel tremors.

There were no immediate reports of damage in the Tulsa area.