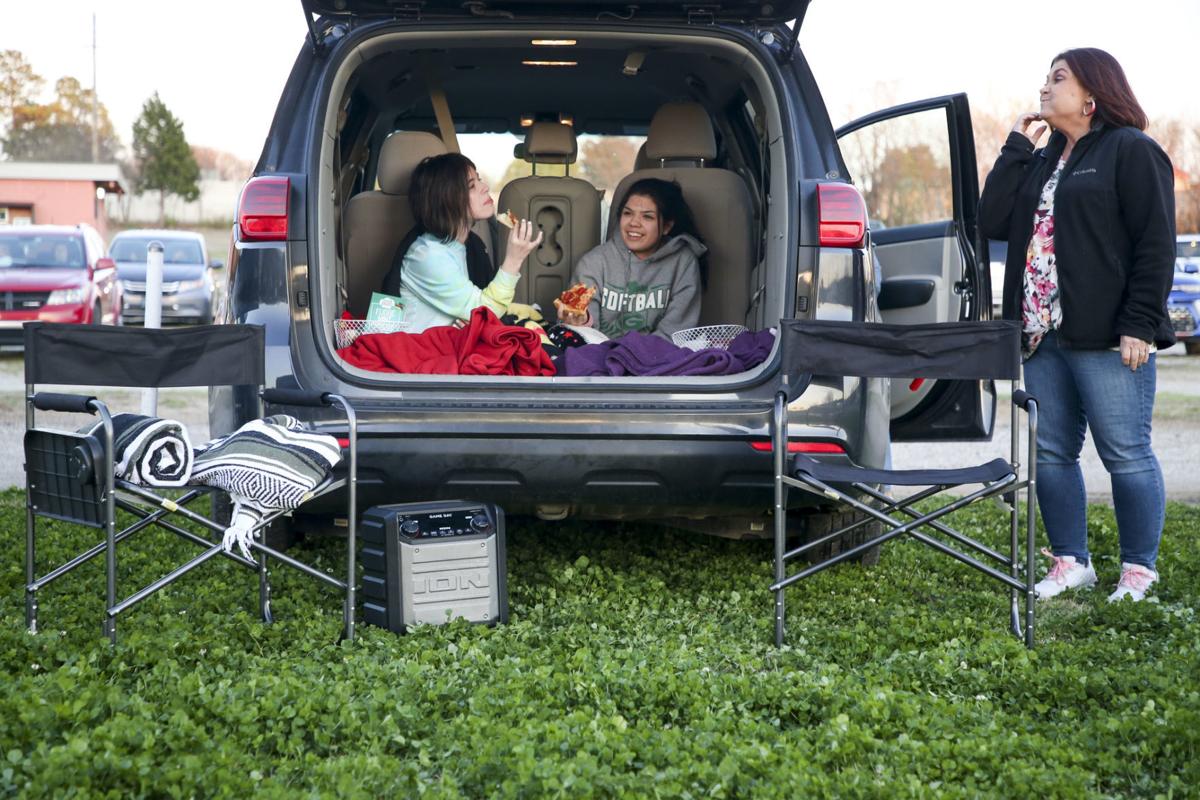 Kristin, 13, and Kaylee Hatfield, 12, eat pizza in their car while their parents, Aaron and Carla, set up chairs at Admiral Twin Drive-In on March 20, which was a week before the theater closed due to the pandemic. The drive-in reopens this weekend for Friday-Sunday night shows each week. IAN MAULE/Tulsa World 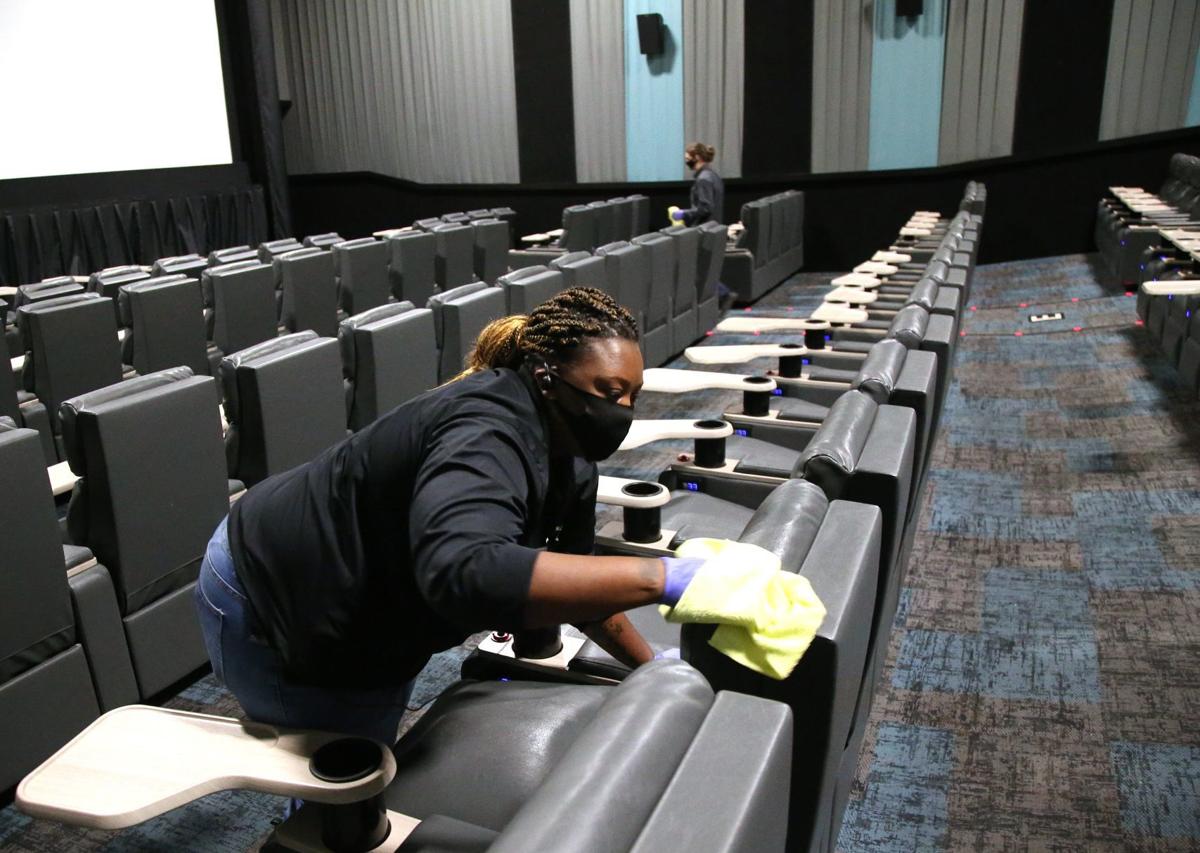 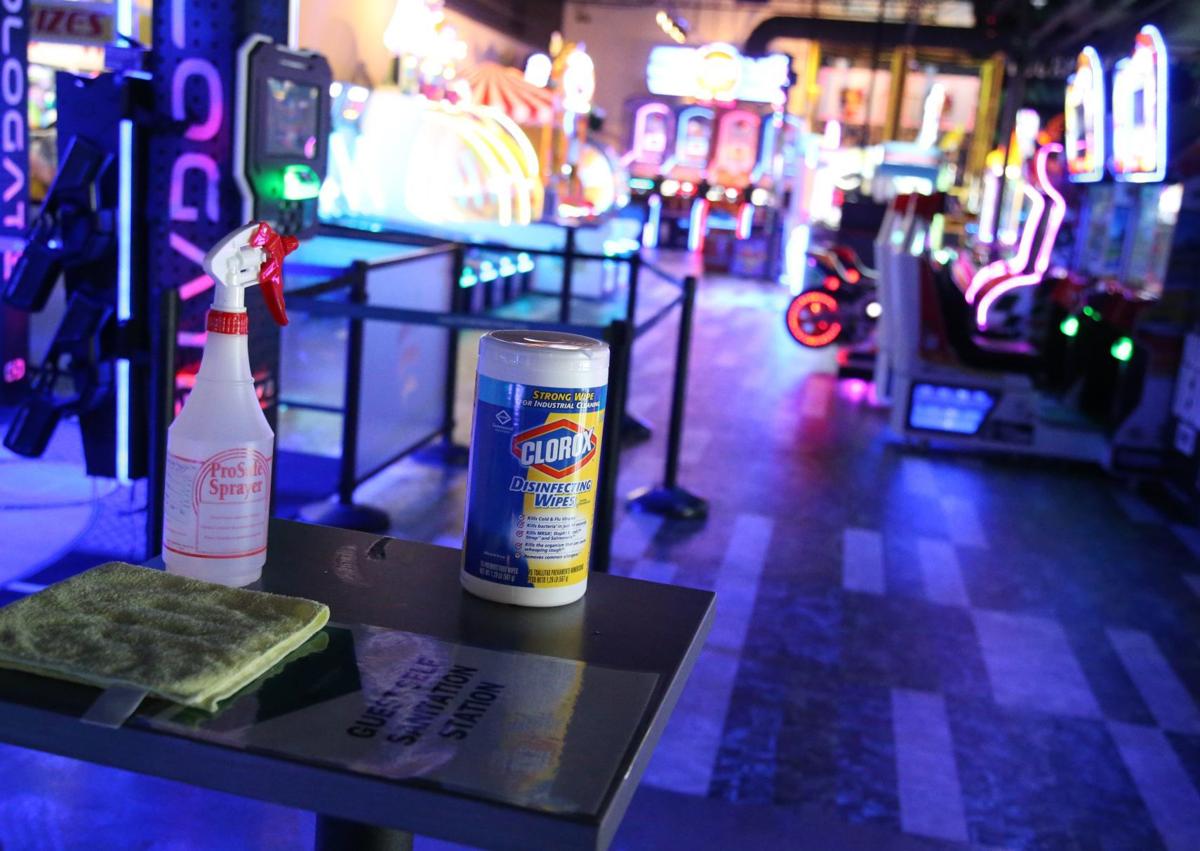 Self-serve cleaning stations are available at Cinergy Cinemas & Entertainment, 6808 S. Memorial Drive, which has reopened and has limited some offerings to prevent the spread of coronavirus. 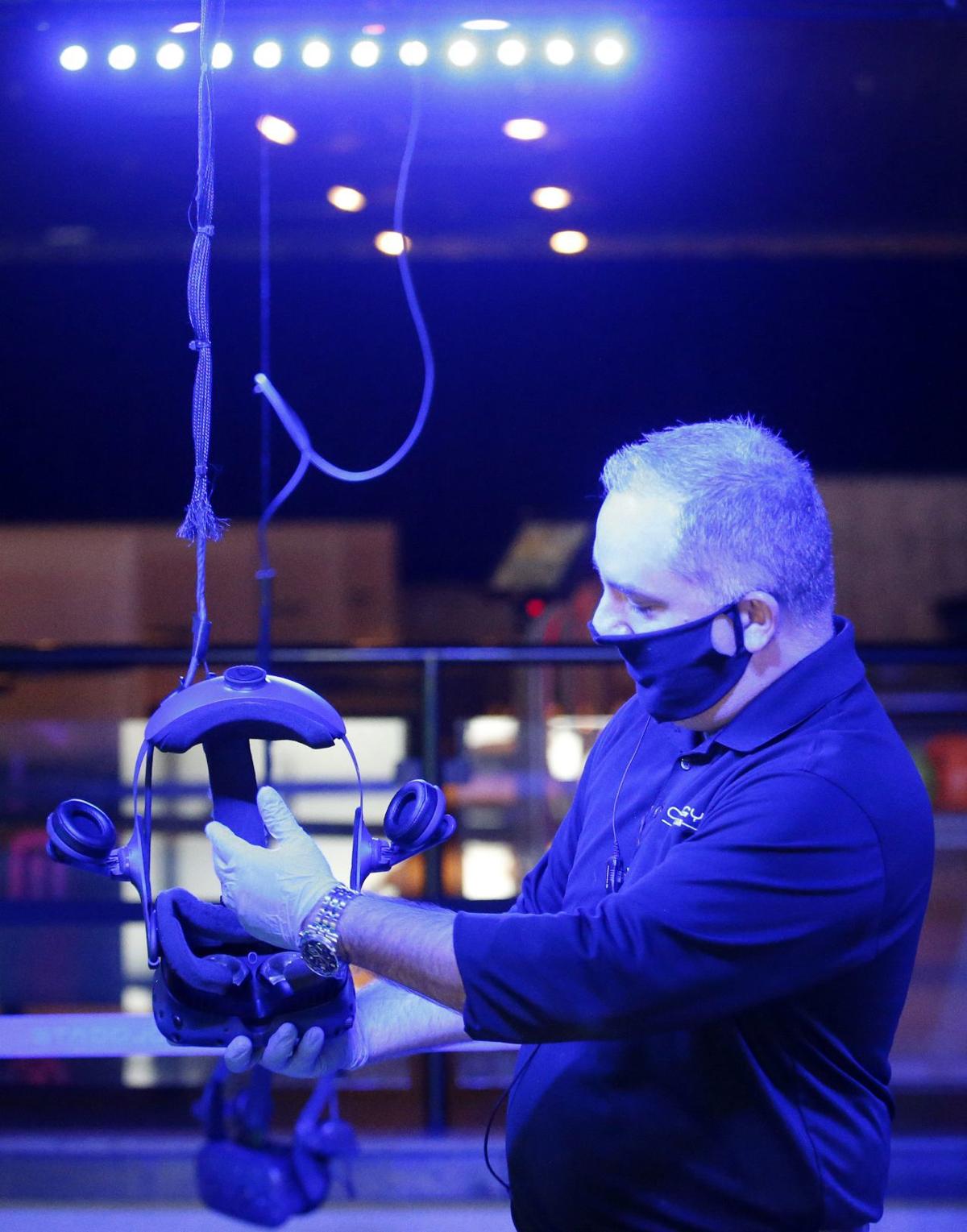 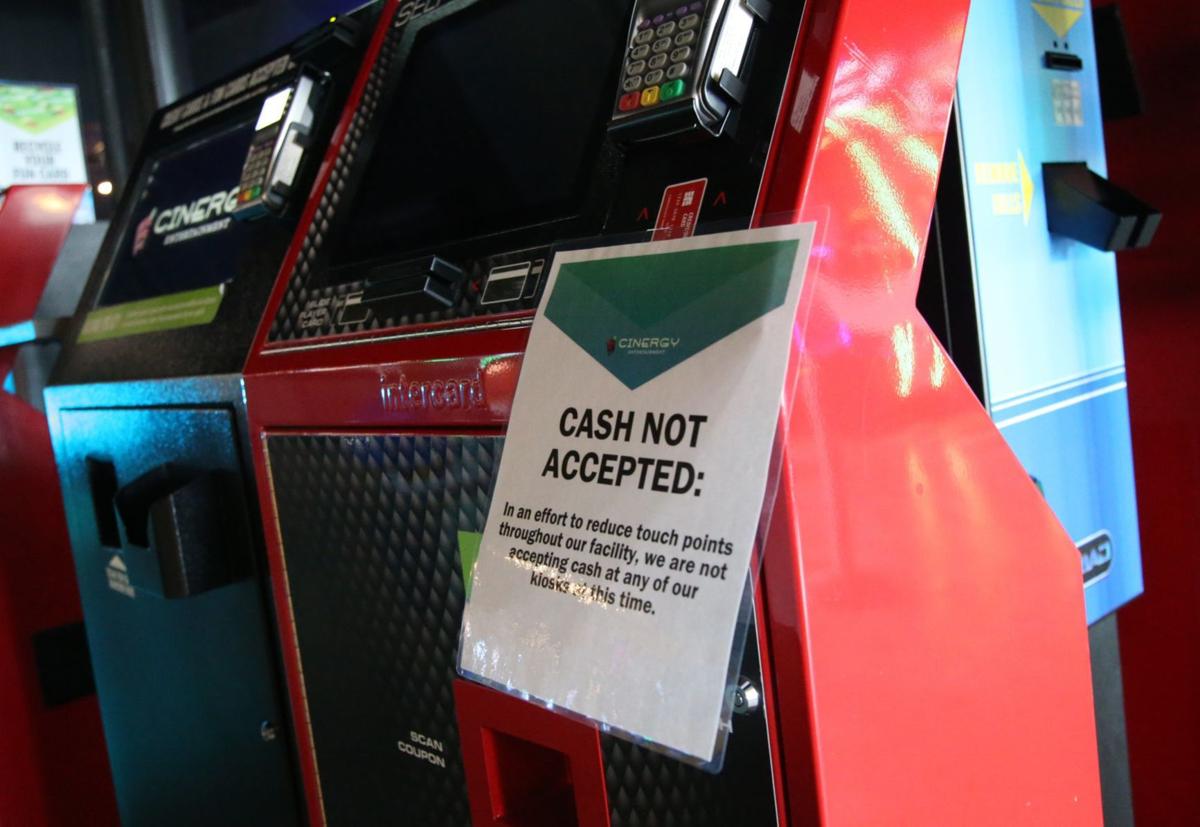 A sign advises patrons that cash is not accepted at Cinergy Cinemas & Entertainment, which has reopened and is advising guests to make some purchases, including movie tickets, in advance on their website. MATT BARNARD/Tulsa World 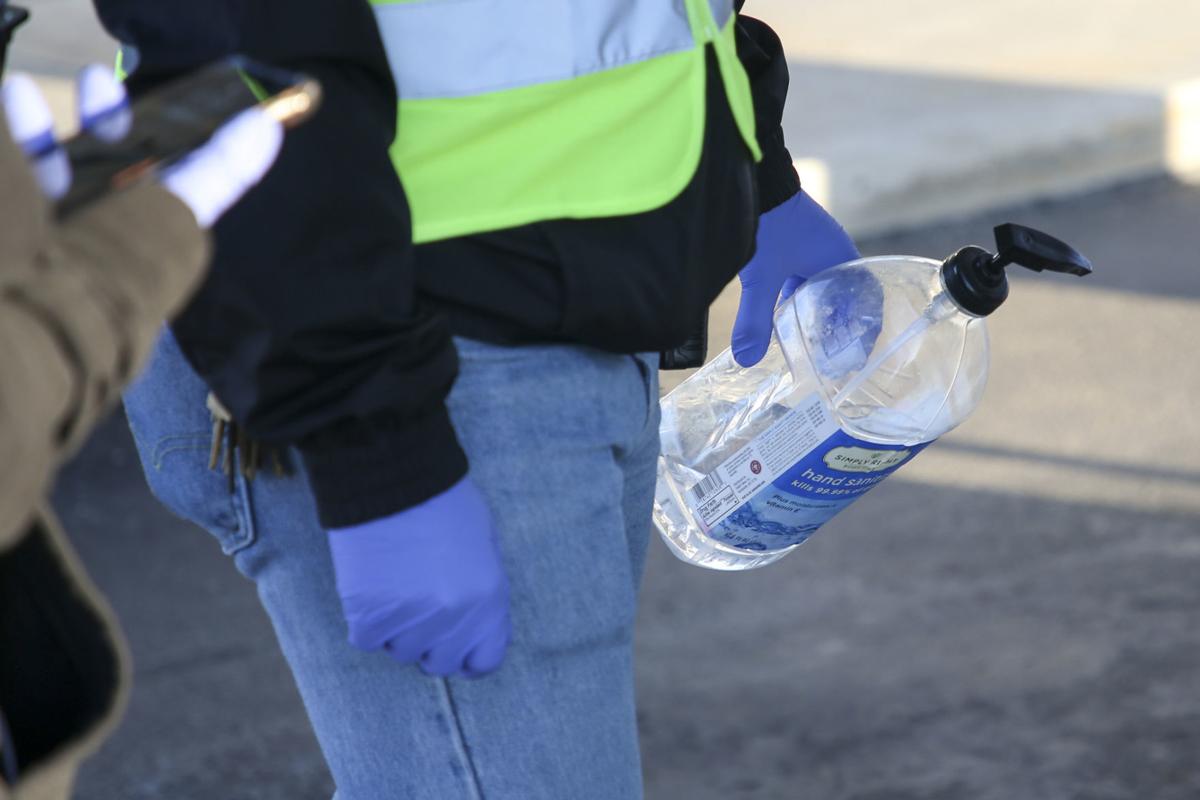 An Admiral Twin employee carries a container of hand sanitizer while working at the drive-in.

Kristin, 13, and Kaylee Hatfield, 12, eat pizza in their car while their parents, Aaron and Carla, set up chairs at Admiral Twin Drive-In on March 20, which was a week before the theater closed due to the pandemic. The drive-in reopens this weekend for Friday-Sunday night shows each week. IAN MAULE/Tulsa World

Self-serve cleaning stations are available at Cinergy Cinemas & Entertainment, 6808 S. Memorial Drive, which has reopened and has limited some offerings to prevent the spread of coronavirus.

A sign advises patrons that cash is not accepted at Cinergy Cinemas & Entertainment, which has reopened and is advising guests to make some purchases, including movie tickets, in advance on their website. MATT BARNARD/Tulsa World

An Admiral Twin employee carries a container of hand sanitizer while working at the drive-in.

The Admiral Twin Drive-In will reopen Friday, May 15, but some things have changed.

Meanwhile, Cinergy Tulsa is the first indoor movie theater in Tulsa to reopen, but not everything it offers is back open.

And these are the first two theaters that are welcoming customers back to their businesses — two weeks after cinemas were among the businesses approved to open back up May 1.

While these theaters waited a couple of extra weeks, national chains like AMC, Cinemark and Regal, all of which have Tulsa theaters, don’t plan to open until July.

The pandemic closed movie theaters, and then movie studios moved all of their blockbusters planned for May and June to later this year or next year.

A theater operator that closed and reopens now — and who knows those things might repeat if pandemic numbers spike again — must feel like their old-school projector broke down, and they’ve got it running again, and they hope it keeps operating.

“I wanted to get back open because we’ve been bombarded with cabin-fever people asking us to reopen,” said Blake Smith, owner of the drive-in, which opened for its 69th season for a couple of weeks in March before shutting down.

“We heard from a lot of them who thought we should be open sooner. And I respect those who think theaters should not be open yet. All I can say is that we will do our best to sanitize things.”

While the drive-in, 7355 E. Easton St., has natural “social distancing” with customers watching movies from their individual cars, he knows the biggest issue may be in the usage of the restroom, “and we’ll have a bathroom attendant” on duty, he said.

Smith said he hopes to cut down on the bathroom usage by showing only one movie on each side of the screen tower rather than the regular double-feature showings (like most other drive-ins right now) “because intermission is when the bathrooms fill up,” he said.

At Cinergy Tulsa, the new entertainment facility that features a movie theater, bowling and escape rooms among its many offerings, is implementing a three-phase approach to reopening.

For its movie auditoriums, that means a capacity of 50% through spaced-out seating.

To reduce person-to-person “touchpoints,” Cinergy is encouraging mobile purchases, especially of movie tickets, and is not accepting cash during a first phase of reopening this week at 6808 S. Memorial Drive.

“We have refined our reopening strategy and trained our staff on new protocols and procedures to ensure that everyone can find their fun and remain safe once again at Cinergy,” the company said on its website.

Among the protocols and procedures: sanitizing restrooms; detailed overnight cleaning; extending time between movie showtimes for extra cleaning; employees wearing masks and gloves, which must be replaced every 45 minutes; employees having their temperatures taken prior to entry at work; and customers ordering food from a limited menu, with self-serve drinks eliminated.

At Admiral Twin, the drive-in’s concession stand will be closed and guests can bring in their own food this Friday, Saturday and Sunday.

But only this weekend.

Smith plans to have the concession stand back open for Memorial Day weekend the following week, and he expects the current three-day schedule to continue for at least another month before going to the standard summer schedule of being open daily.

His employees will wear masks and gloves, and Smith said he hopes to soon eliminate a touchpoint as well by offering online ticket sales on his website, admiraltwin.com.

“That way they can buy tickets and show them to us on their phone, or at home they can print off the tickets and bring them to us,” Smith said, adding that he will likely only sell half of the drive-in’s capacity online “so that anyone who wants knows they can still get their tickets at the gate.”

He said he’s also working on developing a food-ordering app for the drive-in’s concession stand, but that likely won’t happen until later in the summer.

His single-feature movies for this weekend are the animated movie “Trolls World Tour” on one side (8:55 p.m. start this Friday through Sunday) and the faith-based drama “I Still Believe” on the other side (8:35 p.m.).

At Cinergy, those two films will play in addition to others that were showing in theaters prior to closing in March, like “Bad Boys for Life” and “The Invisible Man.”

Smith knows that Hollywood studio movies won’t arrive until mid-July — fingers crossed — so he’s considering booking retro screenings of movies like “Back to the Future” and “Harry Potter” films in some future weeks at the drive-in.

He’s even booked a church service and a comedy tour show at Admiral Twin, and he would consider everything from concerts to graduations.

“Hey, whatever we need to do to keep the place open,” Smith said, careful to not say the “doors open” because a drive-in doesn’t have doors.

Nearly all of the country's 5,500-plus movie theaters have been closed due to the pandemic since March 20, with either layoffs or furloughs for more than 150,000 theater workers, according to reports.

With no theaters open, planned blockbuster movies moved from their scheduled dates. The earliest summer movies are now set for July 17 ("Tenet," from "Inception" director Christopher Nolan) and July 24 (live-action "Mulan" from Disney).

The nation's three largest theater chains are aiming to reopen for those films in mid-July.

"As we plan our reopening, the health and safety of our guests and associates is our absolute highest priority. To be able to open, we also need a line of sight into a regular schedule of new theatrical blockbusters that get people truly excited about returning to their favorite movie theaters...," AMC said in an April 24 statement.

"AMC is currently working through every detail required to successfully showcase these exciting new releases in an environment that’s safe and welcoming for moviegoers, and we will share those details as we get closer to the dates when our theaters will reopen."

Mike Mendenhall, owner of the Eton Square Cinema, has said he intends to reopen no later than June, while Circle Cinema plans to reopen in late June or early July.

B&B Theatres, which owns Tulsa's Starworld 20, as well as theaters in Sapulpa and Claremore, did not respond to a request for opening information.