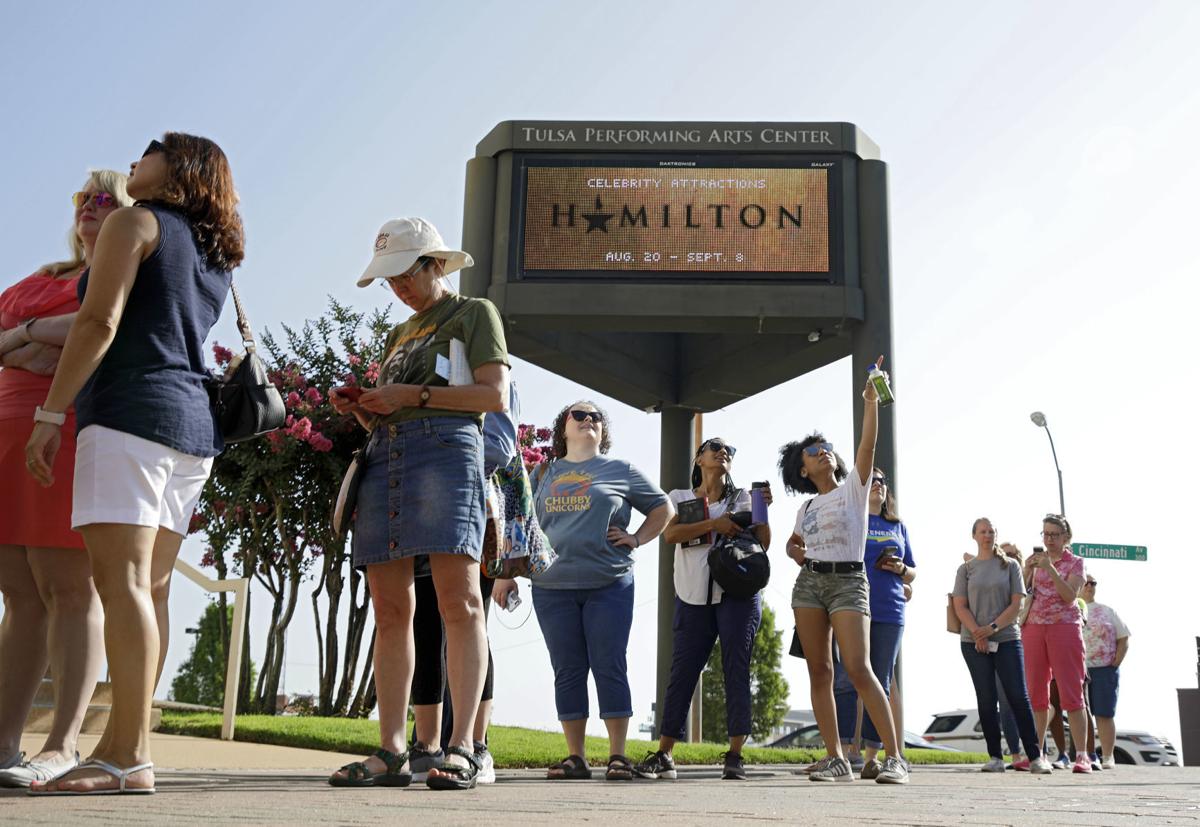 Customers wait in line outside the Tulsa Performing Arts Center for tickets to go on sale for “Hamilton.” MIKE SIMONS/Tulsa World

Joseph Morales stars as Alexander Hamilton in the Broadway touring production of “Hamilton,” which will be at the Tulsa PAC from Aug. 20-Sept. 8.

Customers wait in line outside the Tulsa Performing Arts Center for tickets to go on sale for “Hamilton.” MIKE SIMONS/Tulsa World

Joseph Morales stars as Alexander Hamilton in the Broadway touring production of “Hamilton,” which will be at the Tulsa PAC from Aug. 20-Sept. 8.

The first major exhibit drawn from the Bob Dylan Archives is centered around 12 pastel portraits by the Nobel Prize winner, as well as a variety of memorabilia, ranging from hand-written lyrics to clothing.

Through 10/6, ‘Wondrous Worlds: Art and Islam Through Time and Place’

This exhibition will surprise viewers with dazzling works that span over 1,400 years of art in media, ranging from carpets and dress to jewelry, ceramics, glass, metal, paintings, prints, calligraphy and photographs.

These two shows present two different views of Tulsa and Oklahoma — Clark’s dark, violent, ultimately heartbreaking portfolio of true “Outsiders” in the 1960s and ’70s and Lee’s disquietingly serene vistas of Oklahoma’s cities, lands and towns, and the traces man has left behind.

Theatre Tulsa opens its 97th season with the sunny, funny and heartwarming musical based on Swedish pop band ABBA’s famous ’70s songs, such as “Dancing Queen,” “Take a Chance on Me” and “SOS.” On the eve of her wedding, a young woman searches for her birth father on a Greek island paradise.

The popular Australian group of entertainers for youngsters, who have been called “life affirming,” makes its first major tour in years, featuring the core group of Emma, Lachy, Simon and Anthony, along with Dorothy the Dinosaur, Captain Feathersword, Wags the Dog, Henry the Octopus and a new Wiggly friend, Shirley Shawn the Unicorn.

The blockbuster musical by Lin-Manuel Miranda, based on Ron Chernow’s biography, tells the story of Founding Father Alexander Hamilton in a high-energy show that combines a melting pot of musical styles, from jazz and Broadway to blues and hip-hop, a multiracial cast and Andy Blankenbuehler’s high-flying choreography to show how America in the 1700s is very much like America in the 21st century.

The 10th anniversary of this celebration of original short plays will feature new works, along with some of the favorite pieces from the preceding 10 years.

World Stage Theatre presents this coming-of-age drama about two young girls in a staunchly conservative town who discover their love for each other.

The Tulsa Symphony will officially open its performance season with this free outdoor concert that will conclude with a fireworks display.

Steve Martin’s play imagines a chance meeting between the artist Pablo Picasso and the physicist Albert Einstein shortly before each man would startle the world with two works — Picasso’s “Les Demoiselles d’Avignon” and Einstein’s special theory of relativity. And Elvis, it seems, has not left the building.

One of the country’s leading violinists, Rachel Barton Pine will join the Tulsa Symphony for a gala event, performing Samuel Barber’s Violin Concerto, as conductor Daniel Hege leads the orchestra in Rossini’s Overture to “The Barber of Seville” and Mussorgsky’s “Pictures at an Exhibition.”

Chamber Music Tulsa begins its 66th season with a fanfare — quite literally, as this ensemble will open its concert with Jennifer Higdon’s “Fanfare,” the start of a program that will include music from the Renaissance to the present day.

One of the most beloved musicals of all time returns to Tulsa in a new production that tells the classic story of Jean Valjean, a convict struggling to live a decent life during the turmoil of political uprisings, while being relentlessly pursued by an obsessed lawman.

Tulsa Ballet’s original children’s ballet “Peter and the Wolf,” with choreography by Ma Cong and a libretto by Dana McGeehan, will open the company’s children’s series, with special matinee performances of this family-friendly ballet.