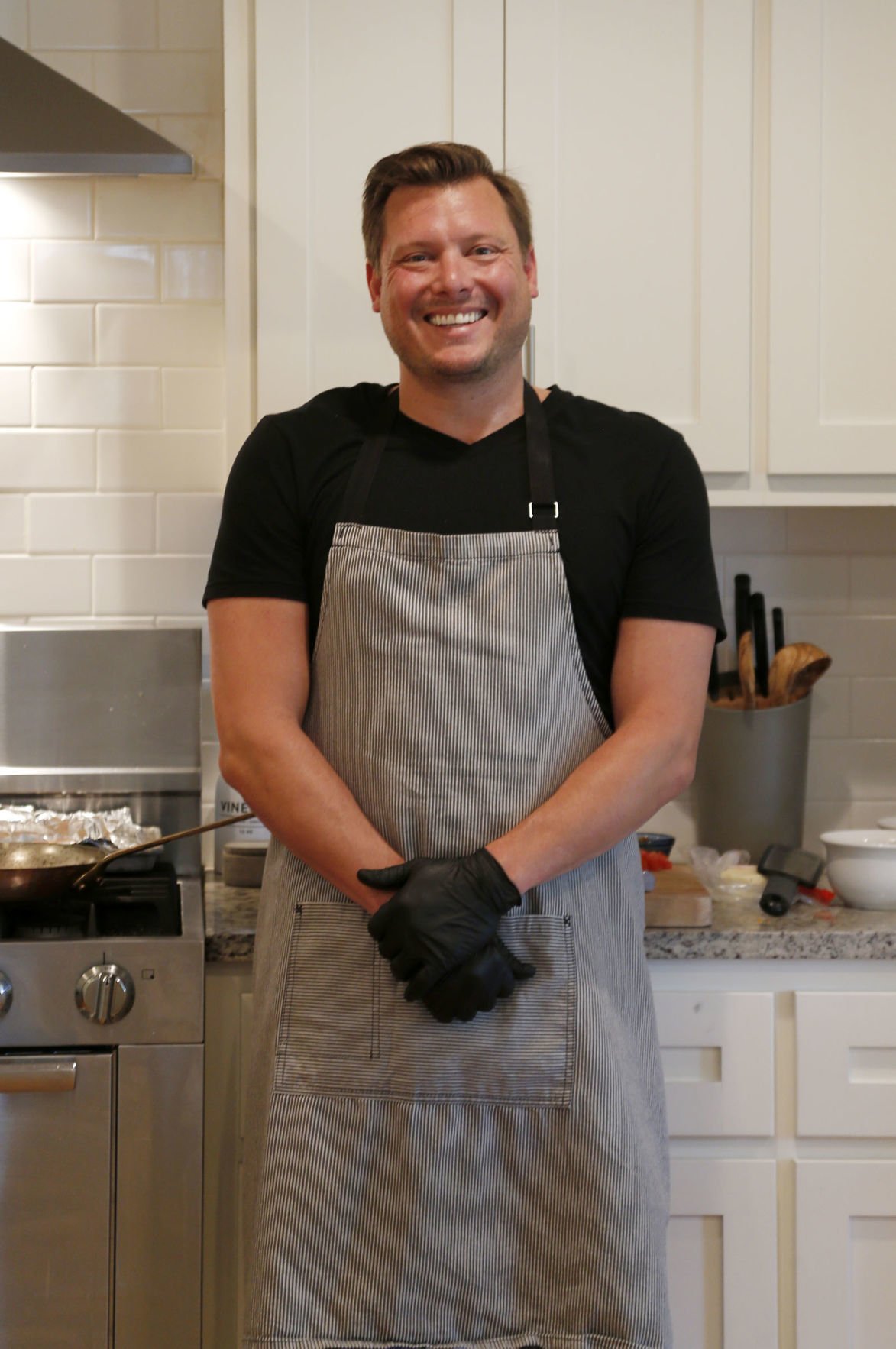 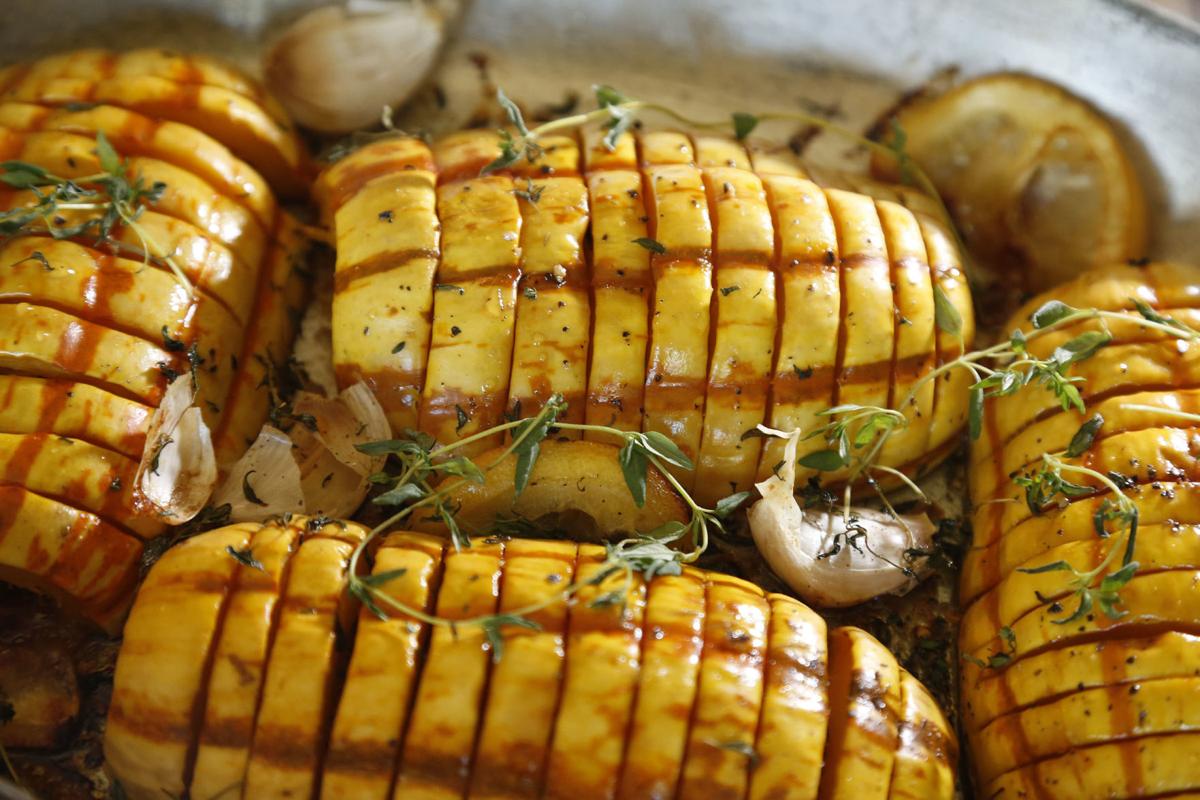 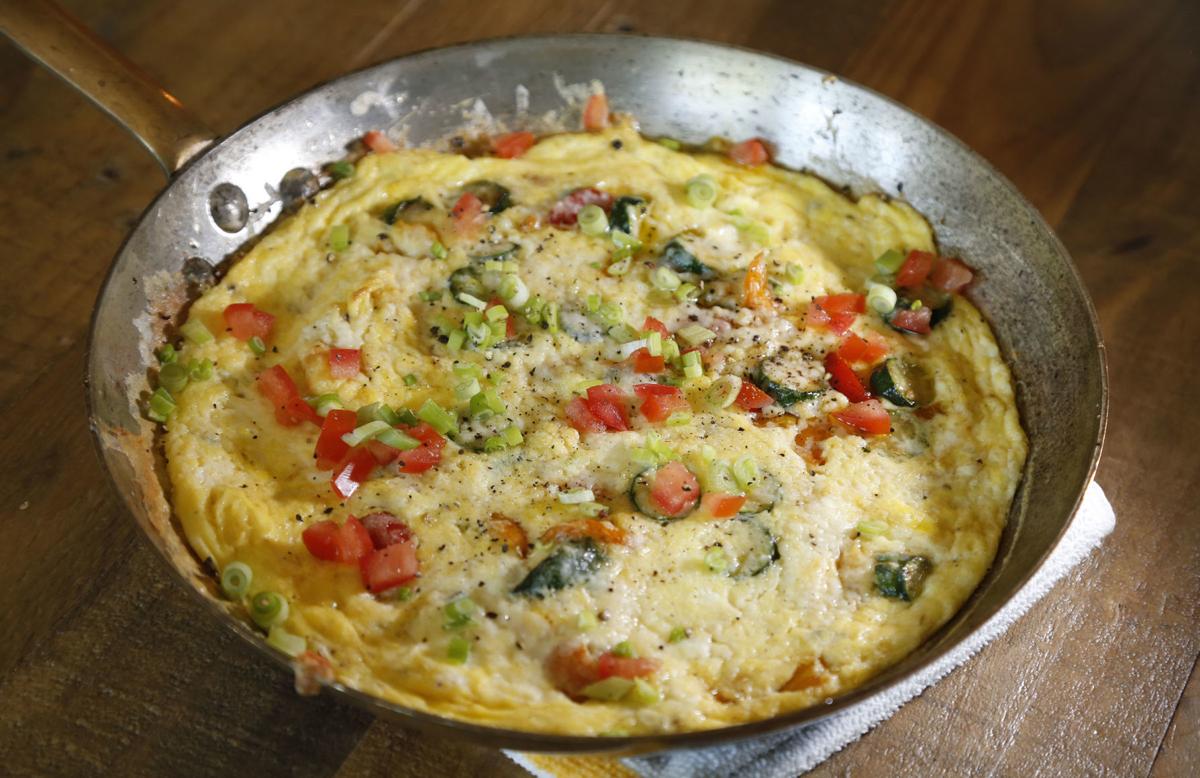 A skillet scramble from chef Trevor Tack can incorporate a variety of meats or vegetables. STEPHEN PINGRY/Tulsa World 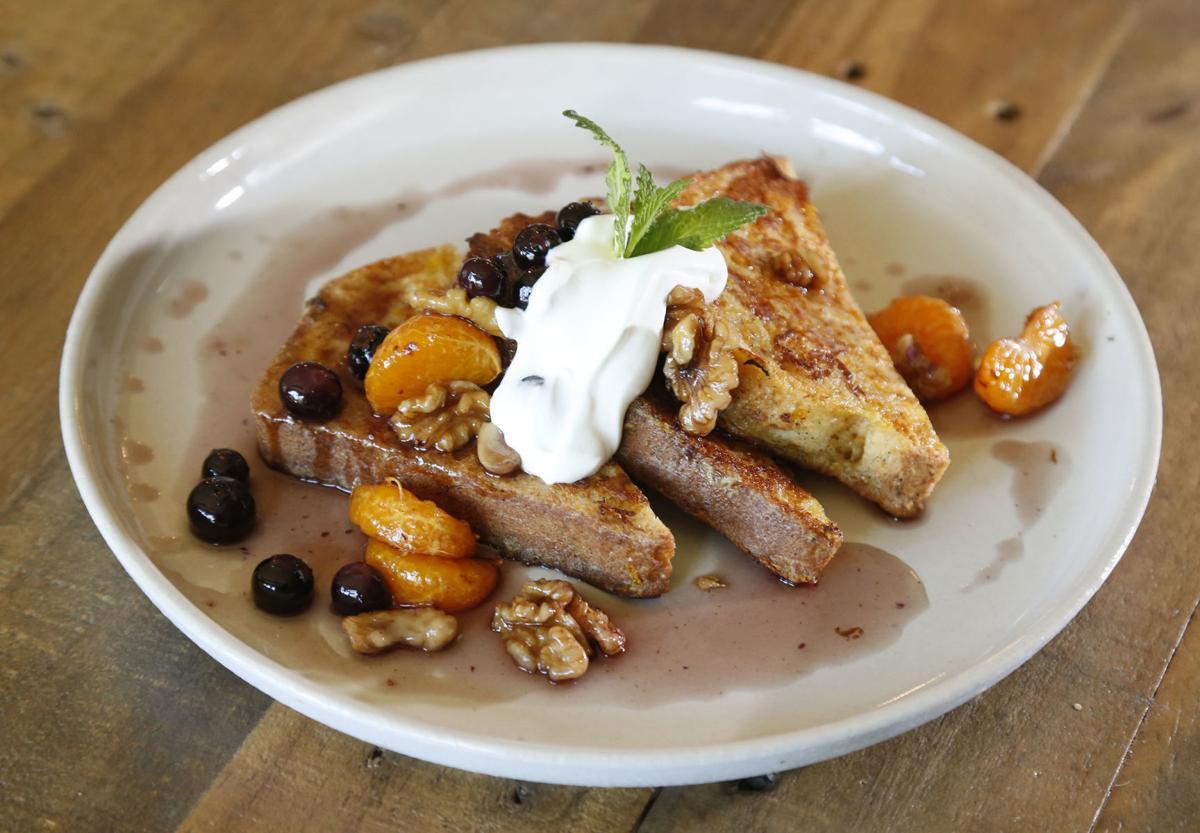 French toast is covered in bourbon-maple syrup and a dollop of whipped cream. STEPHEN PINGRY/Tulsa World 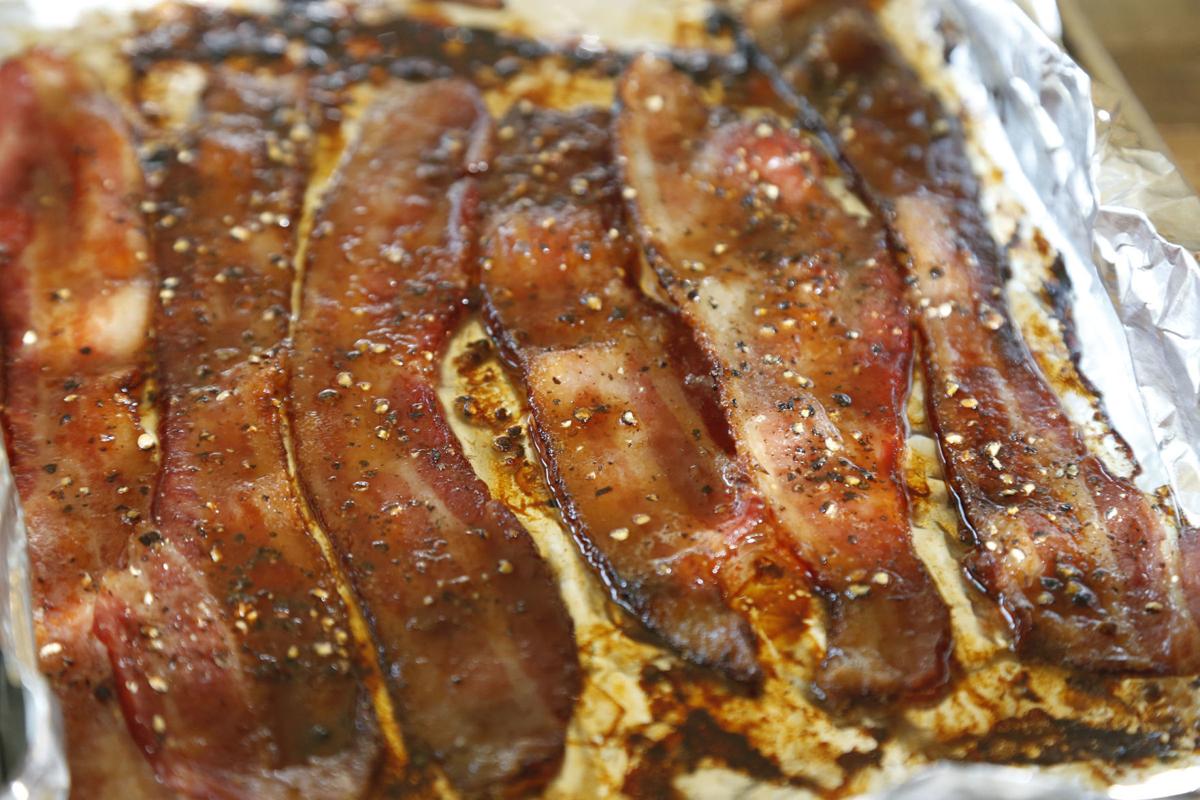 The trick to making brown sugar black pepper bacon is starting it in a cold oven, according to chef Trevor Tack. STEPHEN PINGRY/Tulsa World

A skillet scramble from chef Trevor Tack can incorporate a variety of meats or vegetables. STEPHEN PINGRY/Tulsa World

French toast is covered in bourbon-maple syrup and a dollop of whipped cream. STEPHEN PINGRY/Tulsa World

The trick to making brown sugar black pepper bacon is starting it in a cold oven, according to chef Trevor Tack. STEPHEN PINGRY/Tulsa World

Trevor Tack, a popular Tulsa chef over the past decade, is back in town to help launch a new fine-dining restaurant on Cherry Street.

Tack made his mark at such places as SoChey Jazz Café, R Bar & Grill, Main Street Tavern in Broken Arrow, Bodean Seafood and the McNellie’s Group. He left Tulsa about a year ago to be executive chef for a restaurant group in Oklahoma City.

“I pursued an opportunity in Oklahoma City, but the longer I was there, the more I found out my heart was in Tulsa,” he said recently at his midtown home where he was preparing some of his favorite recipes to share with Tulsa World readers.

“I got a call from Tom Pritner, the general manager at Nola’s (Creole & Cocktails). I had worked with him at the McNellie’s Group. He wanted to see if I had any recommendations for a chef to open a new restaurant the owner (Brett Rehorn) of Kilkenny’s Irish Pub and Nola’s was planning.

“I listened to what he was saying, and I said, ‘What if I was interested?’ One thing led to another. The restaurant doesn’t have a name yet, but it will be a fine-dining restaurant in a new building on Cherry Street (15th Street). It depends on the coronavirus (restrictions), but we are going full bore to open in the fall.”

He said the new restaurant probably will have 65 to 75 seats and will have a butcher shop attached to it.

Tack also had fun cooking up some of his favorite breakfast-brunch recipes, including brown sugar-black pepper bacon, French toast with bourbon-maple syrup, Hasselback delicata squash and a skillet scramble.

“Rather than go shopping, I decided I would make these recipes with whatever I had here at home,” he said. “There are endless variations to these recipes, so I thought that was a good way to go at it.

“For the scramble, which is like a big frittata, I had peppers, zucchini and local cheddar cheese.

“For the syrup for the French toast, I had some frozen blueberries, some walnuts and whiskey. You could use bananas or strawberries or whatever. We had stocked up on whiskey, for disinfectant purposes, of course.

“For the bread, I like the Sally Lunn recipe from a Lee Brothers (Matt Lee and Ted Lee) cookbook. It’s a really old recipe, and I like their version. You can substitute any sturdy white bread. Anything but soft sandwich bread; save that for bologna sandwiches. I didn’t have any whipped cream, so I mixed some milk, sour cream and a little sugar and made something like a crème fraiche.”

“A pro’s trick is to start it in a cold oven,” Tack said. “Start at 400 degrees and check after 15 minutes. When the oven hits temperature, all it is doing is making the bacon more crispy. With this technique, the bacon won’t shrink up on you.”

He said he used the Hasselback technique with the delicata squash, a squash that has a delicate, edible skin. Using the technique, the squash is cut into thin slices but not all the way through.

“The delicata squash is a sweeter squash, and it’s fun to do,” Tack said. “The Hasselback technique usually is done with potatoes, but it also works with squash. It works for the flavor, and it looks amazing.”

Tack said there was a reason he chose these breakfast-brunch dishes at this particular time.

“It’s all comfort food,” he said. “You can make more or less with the basic recipes, and if you have family at home, they can feed a crowd. They can be used later on, too, like the bacon for BLT sandwiches the next day, except for the scramble. Eggs don’t get better with age.”

¼ cup light brown sugar (white sugar works and so does honey or maple syrup; just use a tad less)

12 good twists of the pepper mill, or ½ tablespoon black pepper

1. Put the bacon on a baking tray; sprinkle on sugar and pepper.

2. Place in a cold oven; turn the temperature to 400 degrees and cook for 15 to 22 minutes (ovens vary) until the bacon is bubbly and delicious looking.

4 slices of stale Sally Lunn bread cut into ½- to 1-inch slices (store-bought brioche is fine; just set it out overnight uncovered); the Sally Lunn recipe can be found in “Lee Bros. Southern Cookbook” and is available online in a variety of websites.

2. Put bread in a single layer on a sheet pan or baking dish; cover with the custard and let rest in the custard bath for 30 minutes, turning occasionally.

3. Preheat oven to 350, or just keep it at 400 if the brown sugar black pepper bacon is still cooking.

4. Heat a large nonstick griddle or pan on medium heat for 2 minutes, or until hot. Add a little vegetable oil and then as many pieces of the bread as it can comfortably take.

5. Go easy on these and take your time; burnt toast tastes terrible. When nice and golden brown, flip and do the same to the other side. Finish all the toast in this fashion.

6. Place toast on foil-lined sheet pan. Place in the oven and cook for 10 to 15 minutes, until custard is set in the middle.

1 cup blueberries (or any berries or bananas)

1. Clean out the nonstick pan; put nuts in pan, heat to medium-high and toast the nuts for 5 minutes.

2. Pour in whiskey; burn off alcohol, add remainder of ingredients and reduce for 2 minutes.

3. Kill the heat and wait for toast to be done.

Note: I like to mix sour cream, milk and a little sugar to a loose whipped cream consistency and top the toast with that as well.

2 delicata squash, halved, seeded and sliced ¾ of the way through in thin slices

Salt and pepper, to taste

2. Season the squash with salt and pepper.

3. Drizzle some vegetable oil in a baking or casserole dish; place both halves of squash flesh side down and put pats of butter, honey and thyme around the squash.

4. Squeeze lemon over the top.

This is basically a giant frittata or open-face omelet.

2 eggs and 1 tablespoon milk, beaten, per person (3 if you are really hungry)

1 to 2 tablespoons butter or vegetable oil

2. Add eggs; gently scramble for 1 minute. When it is half set (2 to 3 minutes more), add vegetables or proteins; gently distribute them around.

3. Kill the heat and top with cheese.

4. Put in 400-degree oven until the middle is set and the whole thing is fluffy, 5 to 10 minutes depending on how big it is.

5. Take out of oven and set on trivet or towel and let people serve themselves.