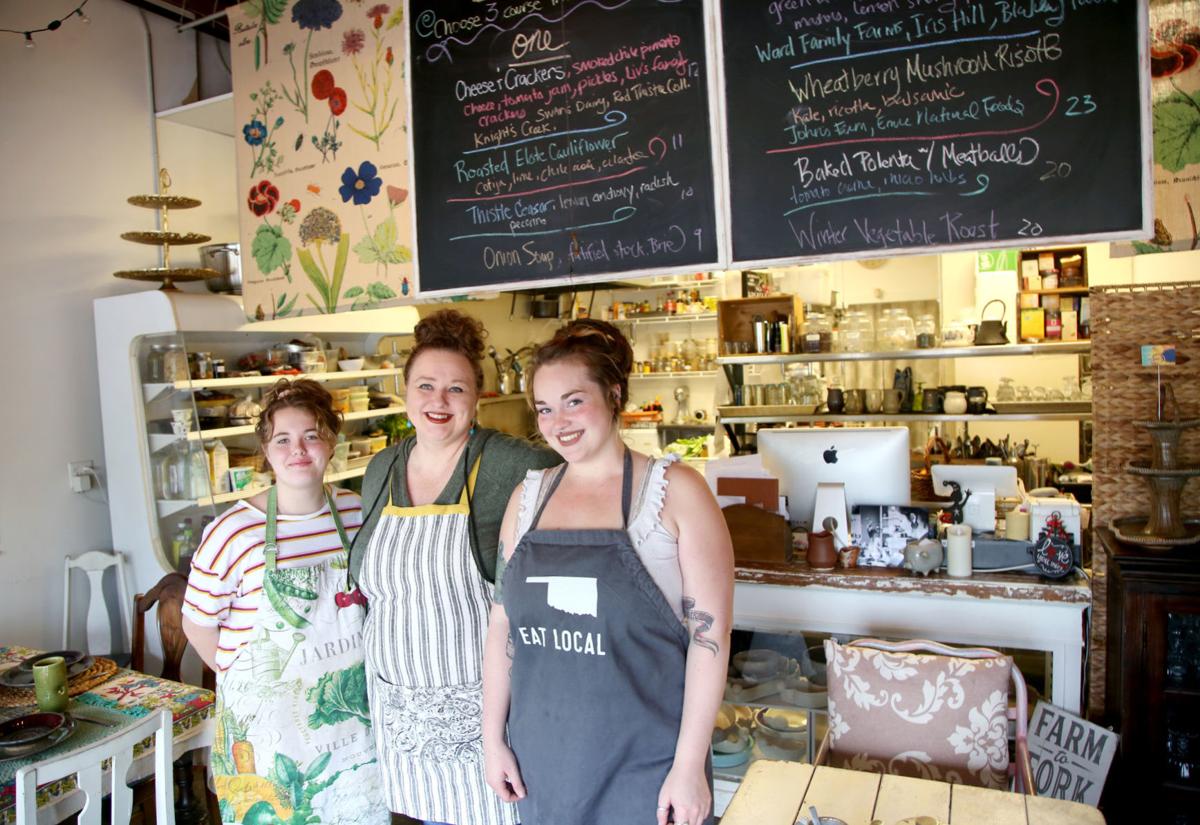 Hope Egan (center), who owns Red Thistle Catering Co., poses at her shop near 11th Street and Harvard Avenue with daughters Sadie (left) and Olivia, who often help her in the kitchen. JOHN CLANTON/Tulsa World 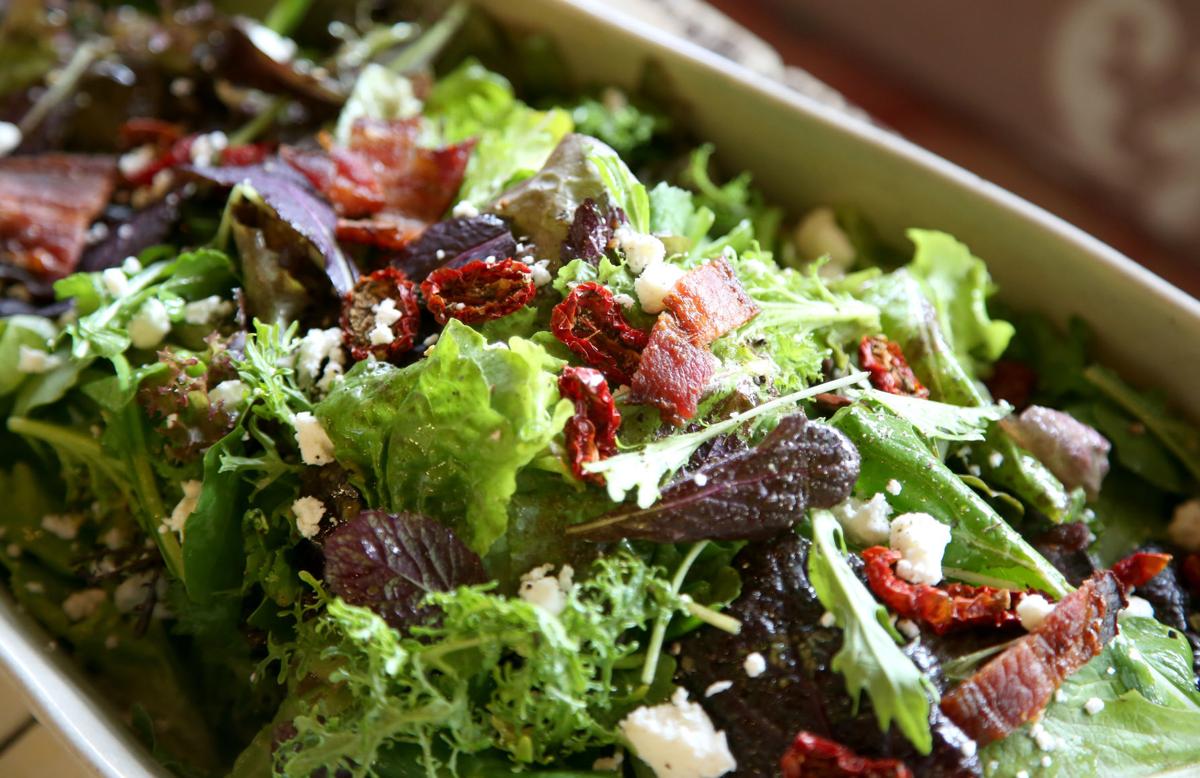 A salad made by Hope Egan at Red Thistle Catering. JOHN CLANTON/Tulsa World 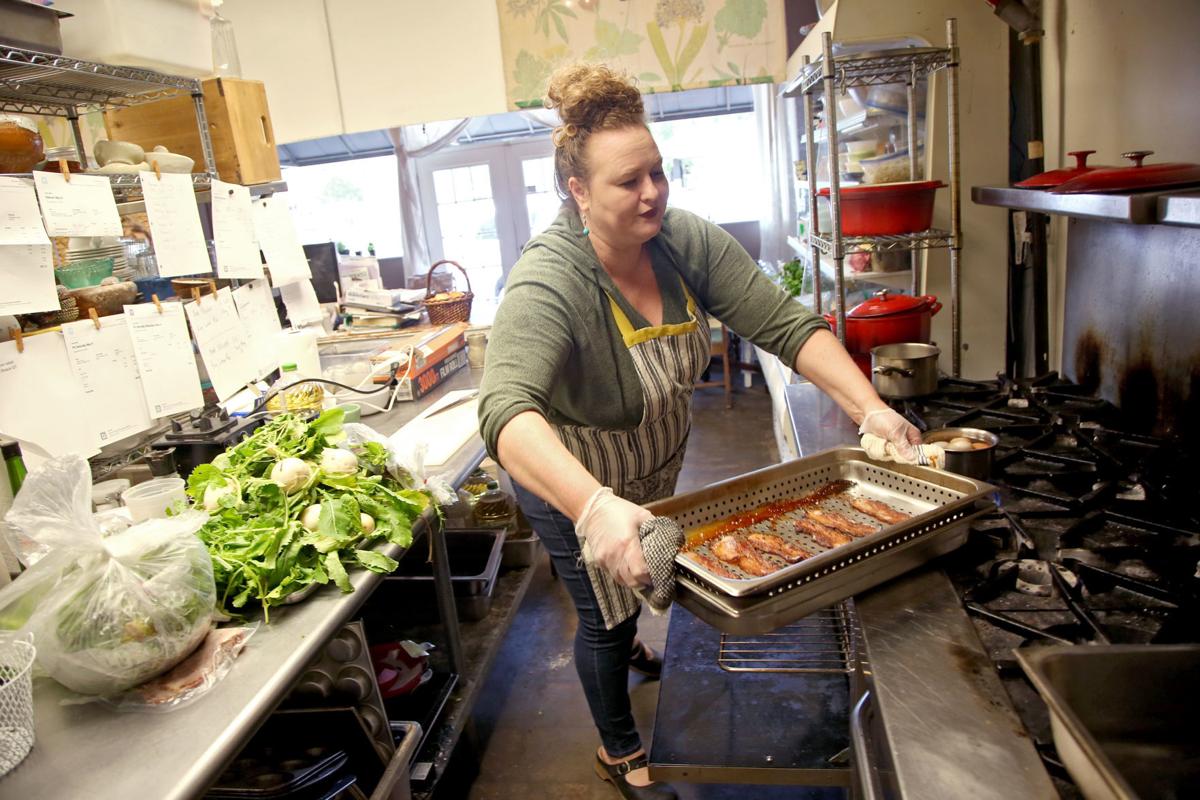 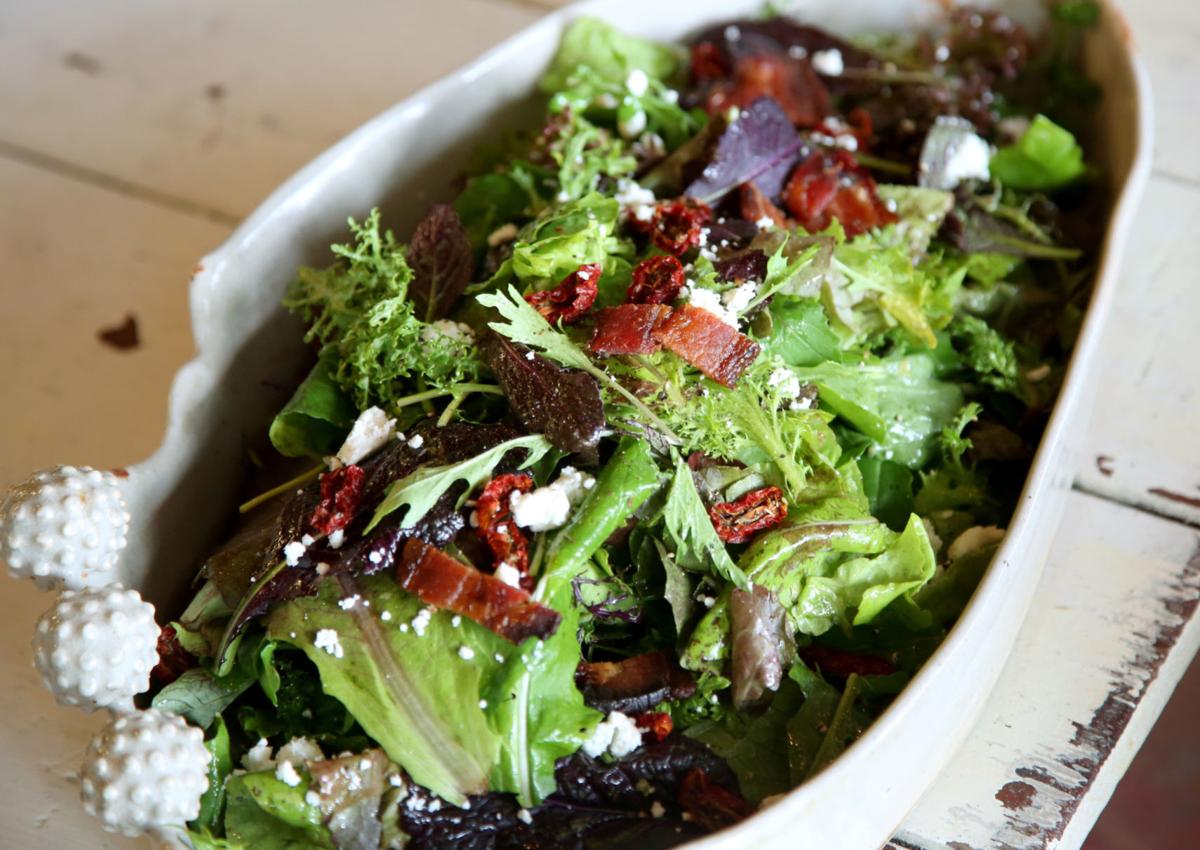 A salad made by Hope Egan at her catering company, Red thistle Catering. JOHN CLANTON/Tulsa World 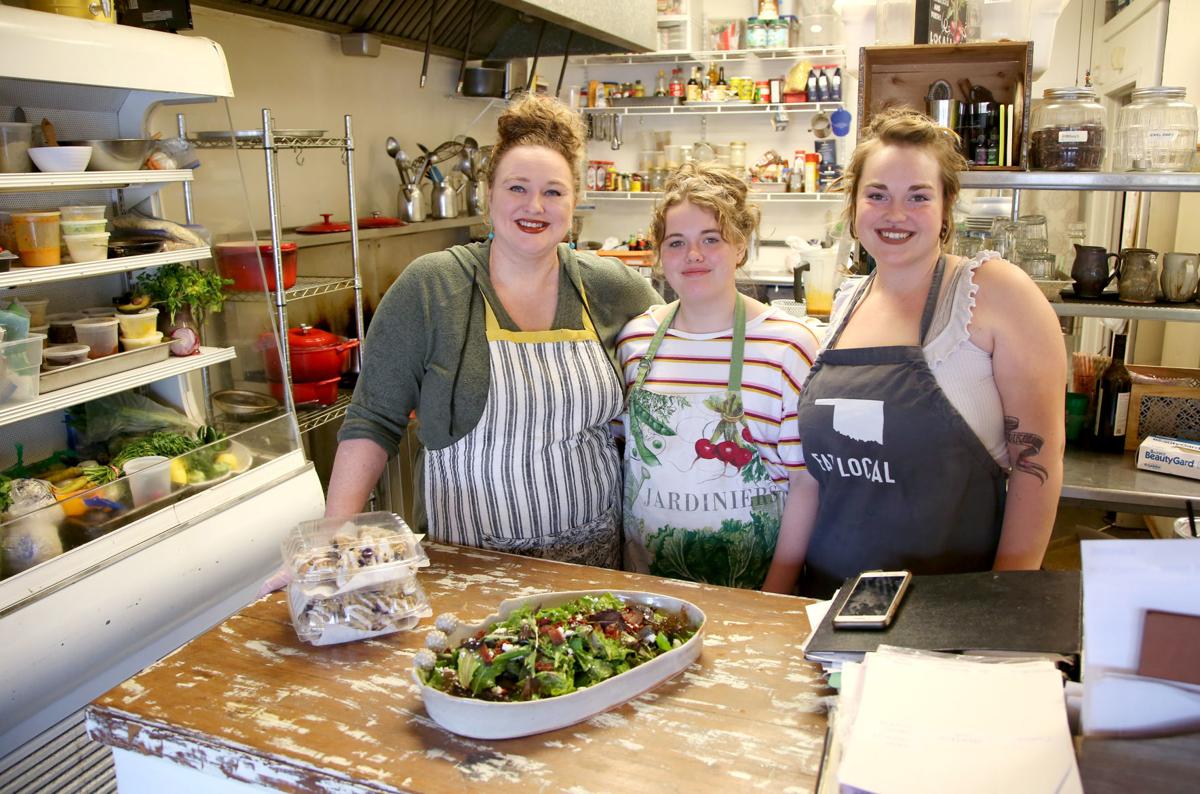 Hope Egan, (left) who owns Red Thistle Catering, poses at her shop near 11th Street and Harvard Avenue with her daughters Sadie (center), 13, and Olivia, who often help her in the kitchen. JOHN CLANTON/Tulsa World 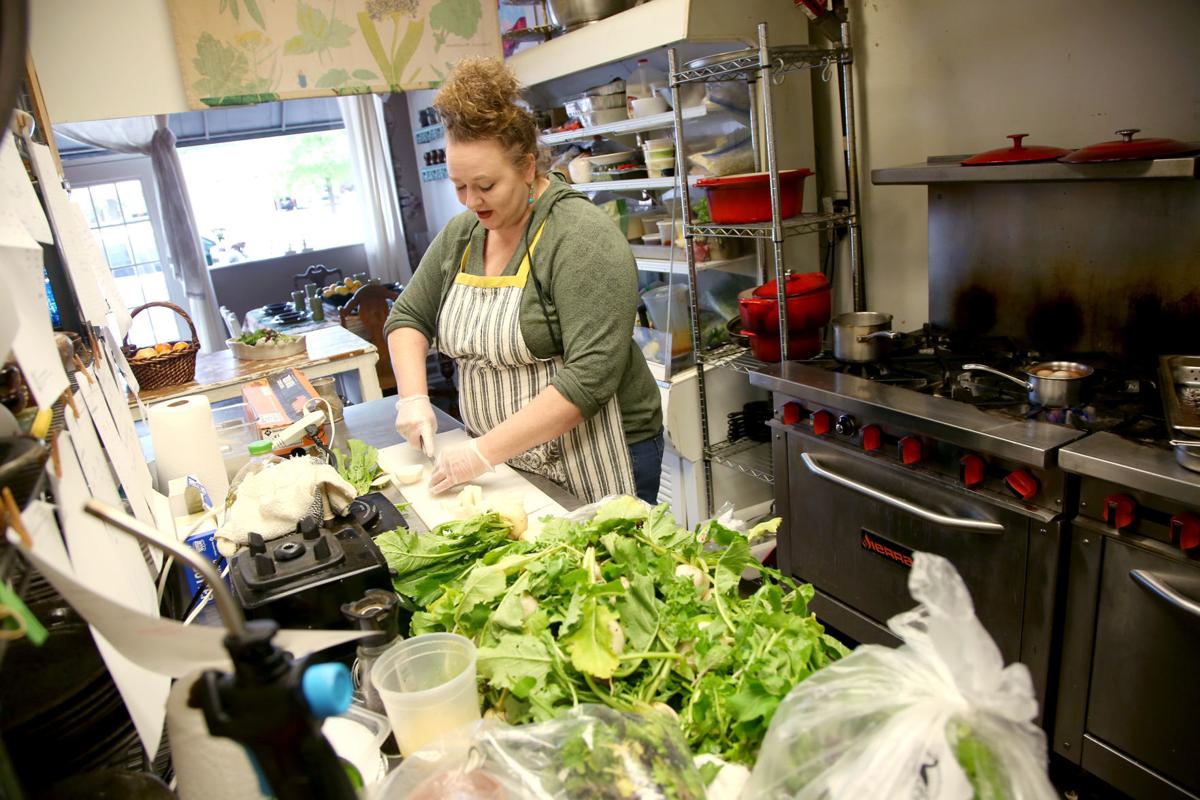 Hope Egan (center), who owns Red Thistle Catering Co., poses at her shop near 11th Street and Harvard Avenue with daughters Sadie (left) and Olivia, who often help her in the kitchen. JOHN CLANTON/Tulsa World

A salad made by Hope Egan at Red Thistle Catering. JOHN CLANTON/Tulsa World

A salad made by Hope Egan at her catering company, Red thistle Catering. JOHN CLANTON/Tulsa World

Hope Egan, (left) who owns Red Thistle Catering, poses at her shop near 11th Street and Harvard Avenue with her daughters Sadie (center), 13, and Olivia, who often help her in the kitchen. JOHN CLANTON/Tulsa World

For the past few months, Egan has been cooking up a storm, but her business model, as has been the case with every other restaurant in the U.S., pivoted on a dime, thanks to the coronavirus pandemic.

Now, Egan spends 70 to 80 hours a week cooking, but her clientele has transformed to include out-of-work hospitality professionals, families and former customers all looking to get a delicious home-cooked meal on the table without having to spend a fortune. Egan’s meal prep now includes more casual menu items with more moderate pricing. And she has been offering restaurant-industry dinners for the last seven Thursdays, feeding up to 80 people each week for free.

In addition to adapting to “the new normal” as far as being a restaurateur, Egan and her family, including her partner, David Farmer, and her youngest daughter, Sadie, are adjusting to life on a small rural farm, learning to raise animals, grow produce and fend off predators.

I’ve been digesting Egan’s Facebook page for the last year or so, living the farm life vicariously through her posts. Most are hilarious, some, just downright incomprehensible. There have been stories of dogs having puppies under the house, and chicks being carried off by hawks, and lots of stray bullets.

Fortunately, not everything happening on the farm is crazy.

“Chickens are very Zen,” Egan said. “Hanging out with them is my favorite thing to do on the farm. David Farmer has these chickens so damn spoiled they don’t even want to peck and scratch and eat the bugs and grass. They just follow him around, begging for food.”

The chickens now provide 90% of the eggs Egan uses in her cooking. And while raising the chickens from tiny chicks has been fruitful, it’s but not without its challenges.

“I know a hawk carried off my sweet pullet, Scarlet Johansson, a few weeks ago,” Egan said in a recent Facebook post. “She was quite the looker and my only olive egger. She just disappeared without a trace. Now David Farmer is sitting and watching a hawk watch our chickens and ducks from a tree about 20 feet away.”

So much for no crazy.

Getting to know the farmers, growers and other local businesses through the Tulsa Farmers’ Market, as well as building relationships with them, is what inspired and ultimately drove Egan to grow and raise her ingredients on her own farm, Red Thistle Collective.

“We started raising our own pigs this year,” Egan said. “We sent the first two pastured hogs to market recently and are using the pork in our meal prep.”

A day in the life of this farmer begins in the morning by feeding the chickens, piglets, puppies and other animals.

“Then, depending on the day, we stock up on ingredients at other local farms, which can take hours, or we commute 35 minutes to the Tulsa kitchen and start cooking.”

Egan is a massive supporter of local farmers, including Joe Tierney of Joe’s Farm in Bixby, Tria Yang Farm, Ward Family Farms, Hungry Duck Farms and many others.

Egan’s daughter Olivia comes to town three to four days a week to help out. Olivia is a professional ceramicist and art teacher and has contributed countless handmade pieces to Red Thistle. Now, she is serving as the pastry chef.

“She has worked with me in some capacity her whole life,” Egan said. “Now, she does all of the baking for our business.”

Sadie, Egan’s youngest daughter, also helps in the kitchen most days and is known for her darling little key lime pies.

“I consider it a free home economics education,” Egan joked.

Egan’s oldest daughter, Alex, lives in Monterey, California, and has stayed there, working from home.

Red Thistle Catering Co. (redthistlecateringtulsa.com), 1345 S. Harvard Ave, is offering curbside pick-up as well as delivery of family-style dinners for 6-10 people. Egan has chosen not to do large parties at this time but will prepare and drop-off the food for large events and provide full-service meals for groups of 10 or fewer.

“It never occurred to me to stop cooking,” Egan said. “We just went into survival mode.”

Later this summer, Egan and company will be relocating to a new farm, and, come fall, will offer Red Thistle Collective’s first farm dinners. And it seems fitting to feature one of the hardest-working moms I know on the eve of Mother’s Day.

“It has been quite the journey,” Egan said. “By the grace of our clients and our community, we are adapting.”

And when Egan finally has time to sit down and relax, it’s not music she turns to for comfort.

“One of my favorite things about the farm,” Egan said, “is the bullfrog serenade at night as we sit at the fire pit.”

Chef Hope Egan created this spring salad recipe to take advantage of offerings from our many local farmers and producers: mixed lettuces from Joe’s Farm or Hungry Duck Farms, Seikel’s Oklahoma Gold Old-Style Mustard, bacon from Blakley Family farms and Prairie Thyme Farms feta cheese. Feel free to add croutons, but Egan’s version is gluten-free — the crunch comes from the dried tomatoes. Radishes are a nice touch too. If you have some, throw them in.

Zest and juice of 3 lemons

1. To make the lemon vinaigrette: Whisk together lemon zest and juice, mustard, ¾ teaspoon salt, and ¼ teaspoon pepper. Slowly whisk in or blend in canola oil. Season to taste with salt and pepper as needed. Set aside while making the salad.

2. To make the miso-maple bacon: Heat oven to 350°. Whisk together the maple syrup and miso paste. Place bacon on a rimmed baking sheet and brush with the miso-maple mixture. Bake for about 30 minutes. Don’t worry if it’s a little blackened; it’s not burned, but caramelized. You want it to be crispy. Set on a cooling rack to drain, it will stick to a paper towel. When cool, chop into bits.

3. To assemble the salad: In a large bowl, combine lettuces with the crumbled miso bacon. Add ¼ cup of the vinaigrette and toss well to coat the lettuce leaves, then season to taste with a pinch or two of salt and pepper. Sprinkle with feta and dried tomatoes and serve.