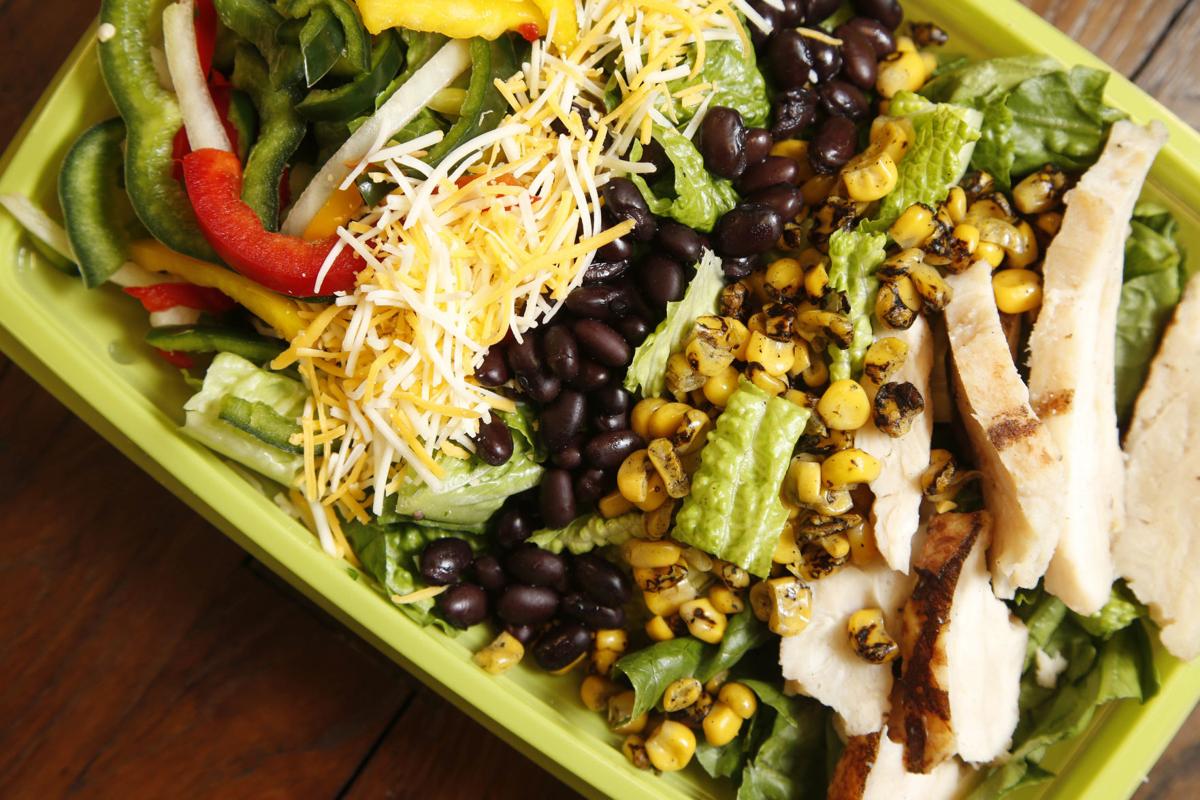 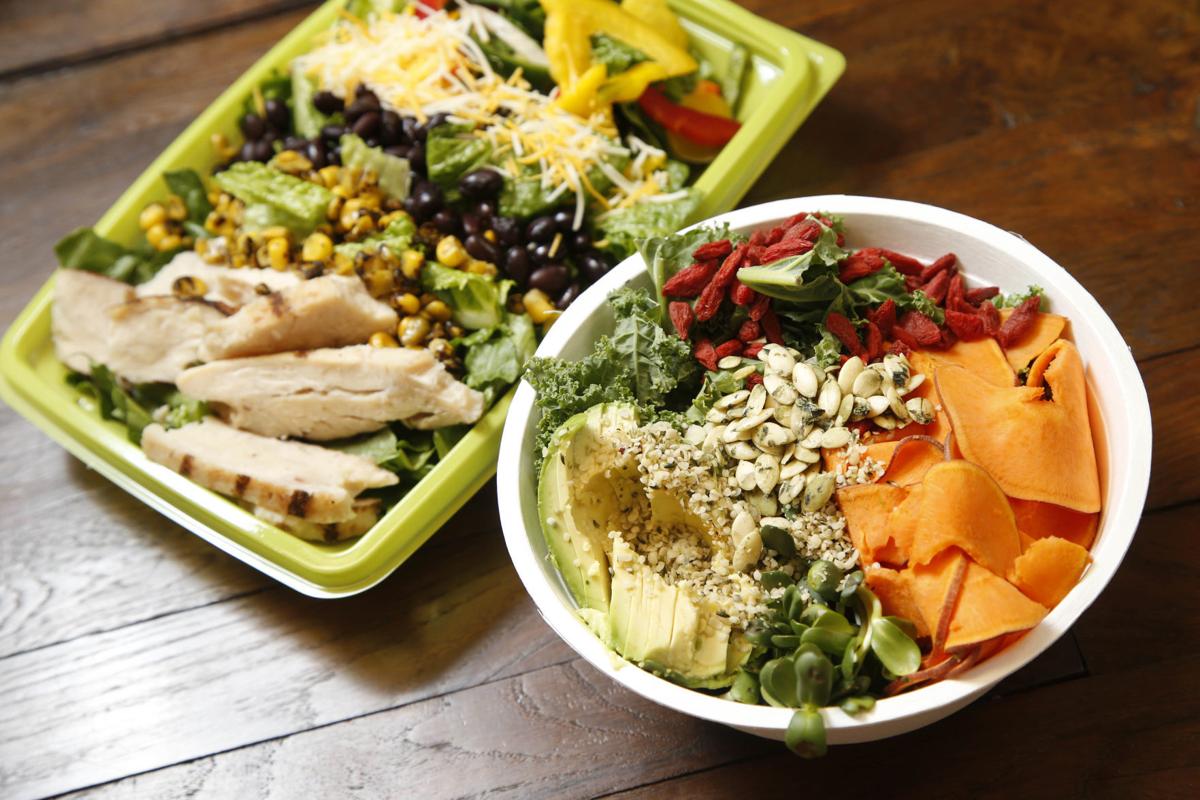 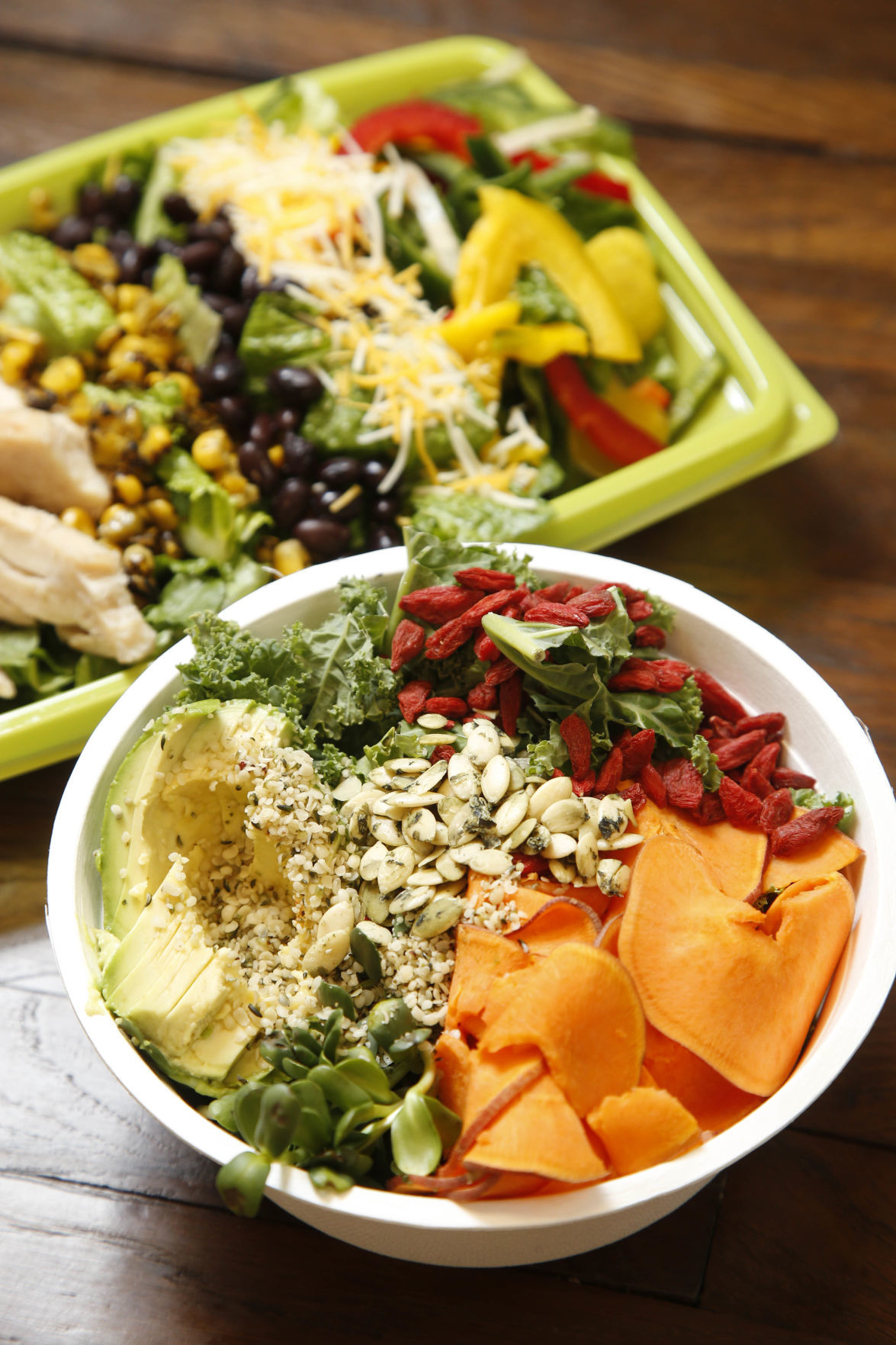 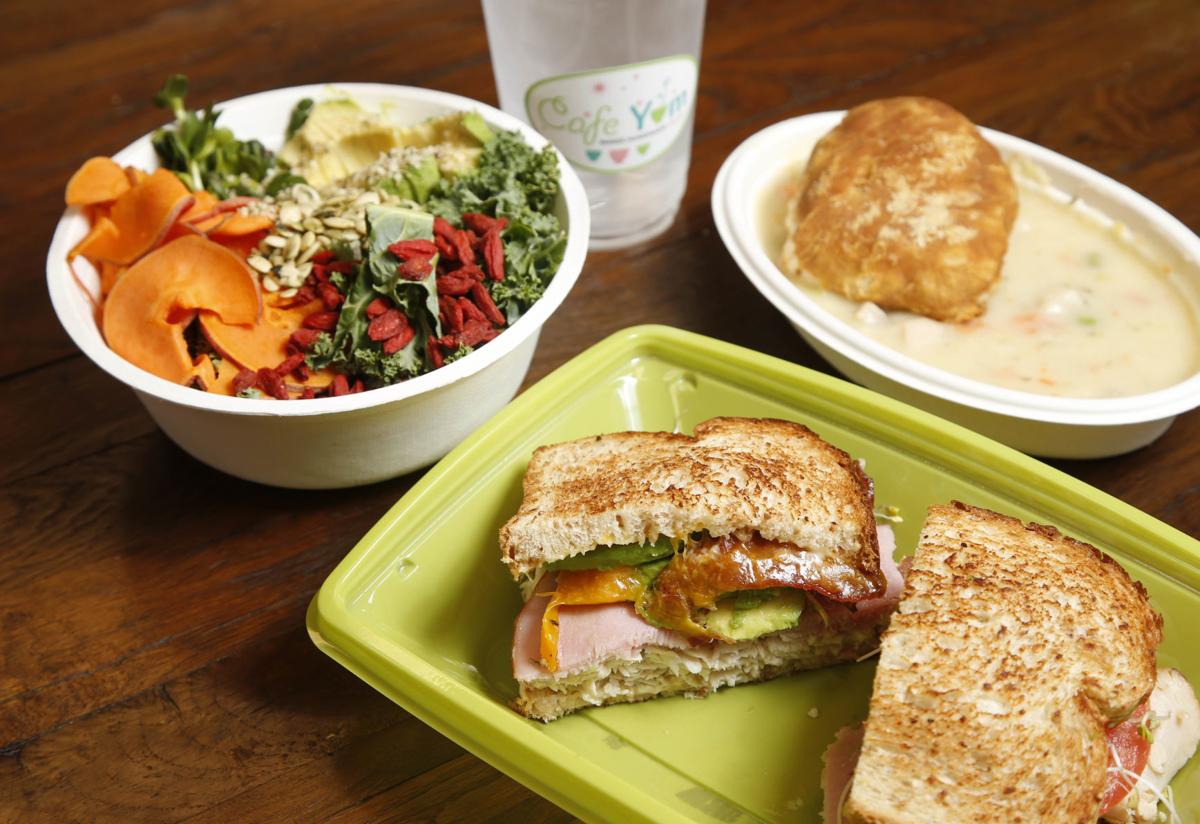 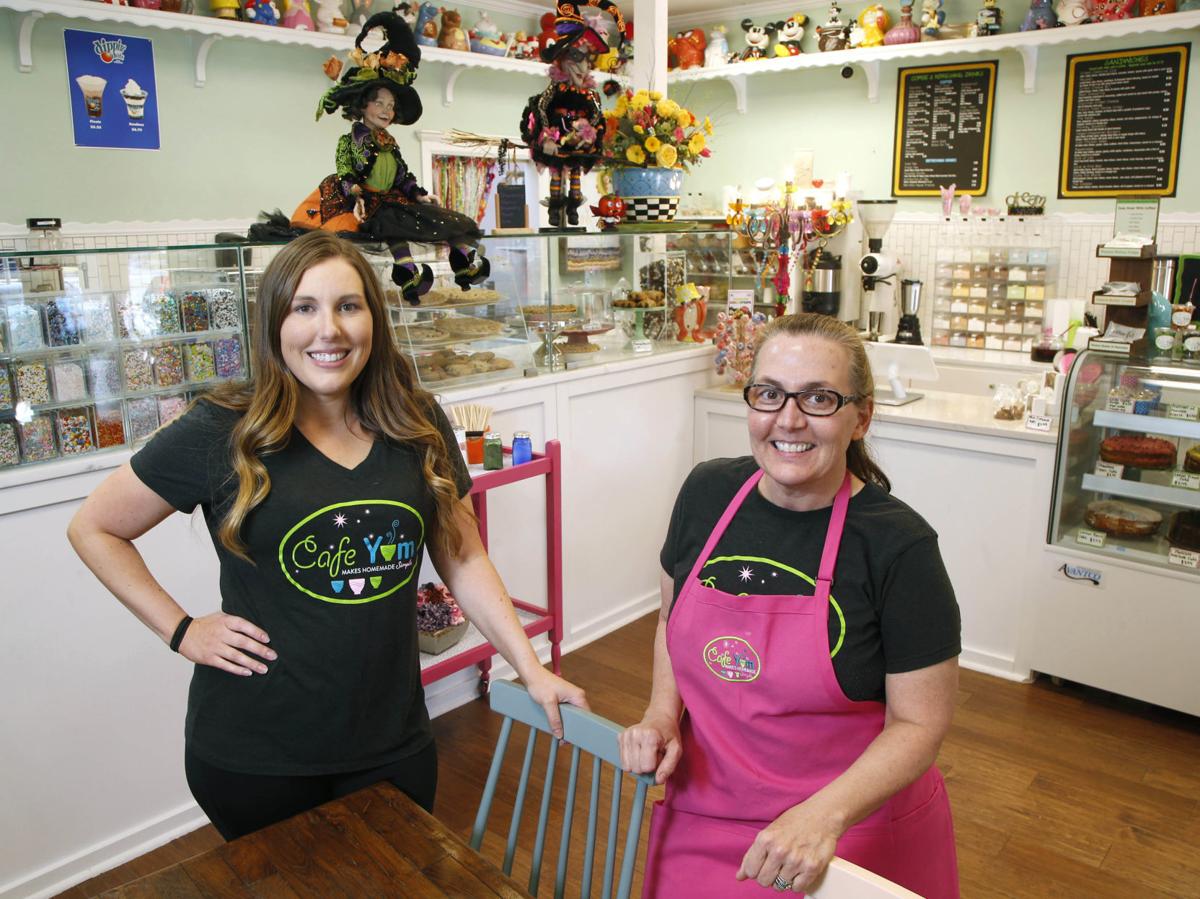 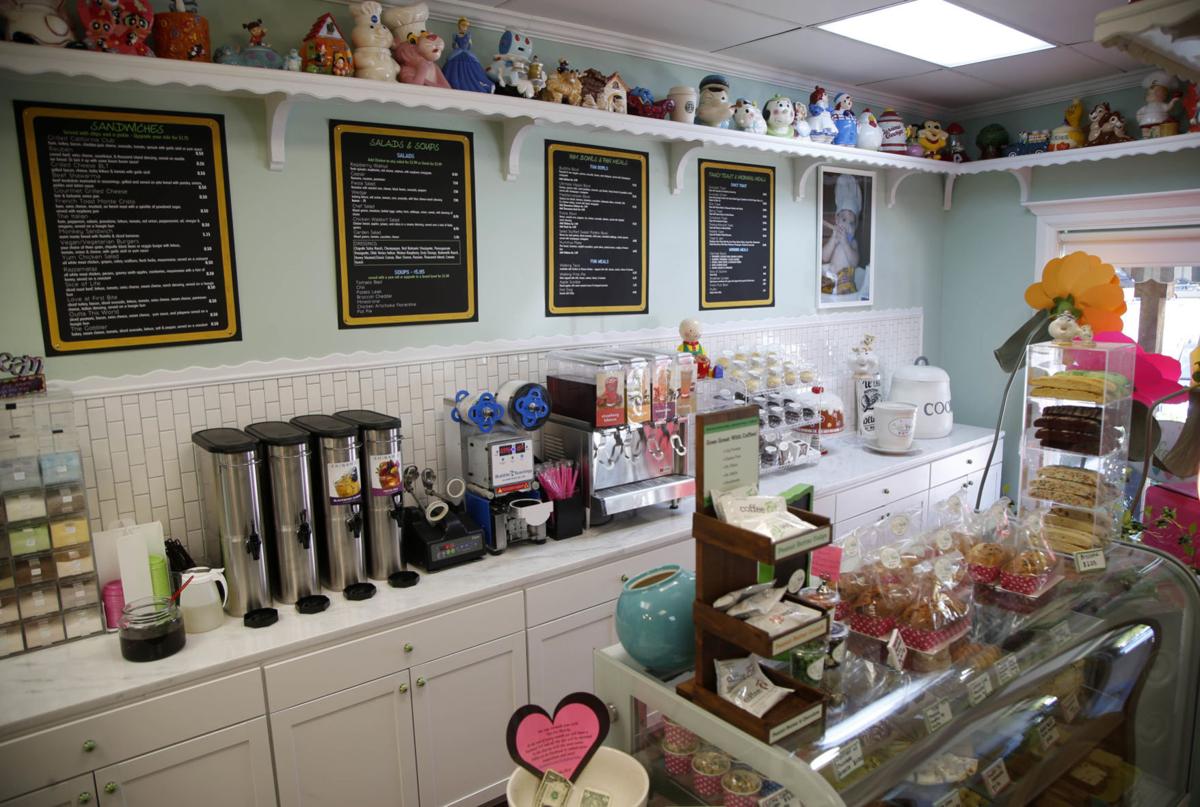 A collection of cookie jars lines the shelves above the order counter at Café Yum. MATT BARNARD/Tulsa World 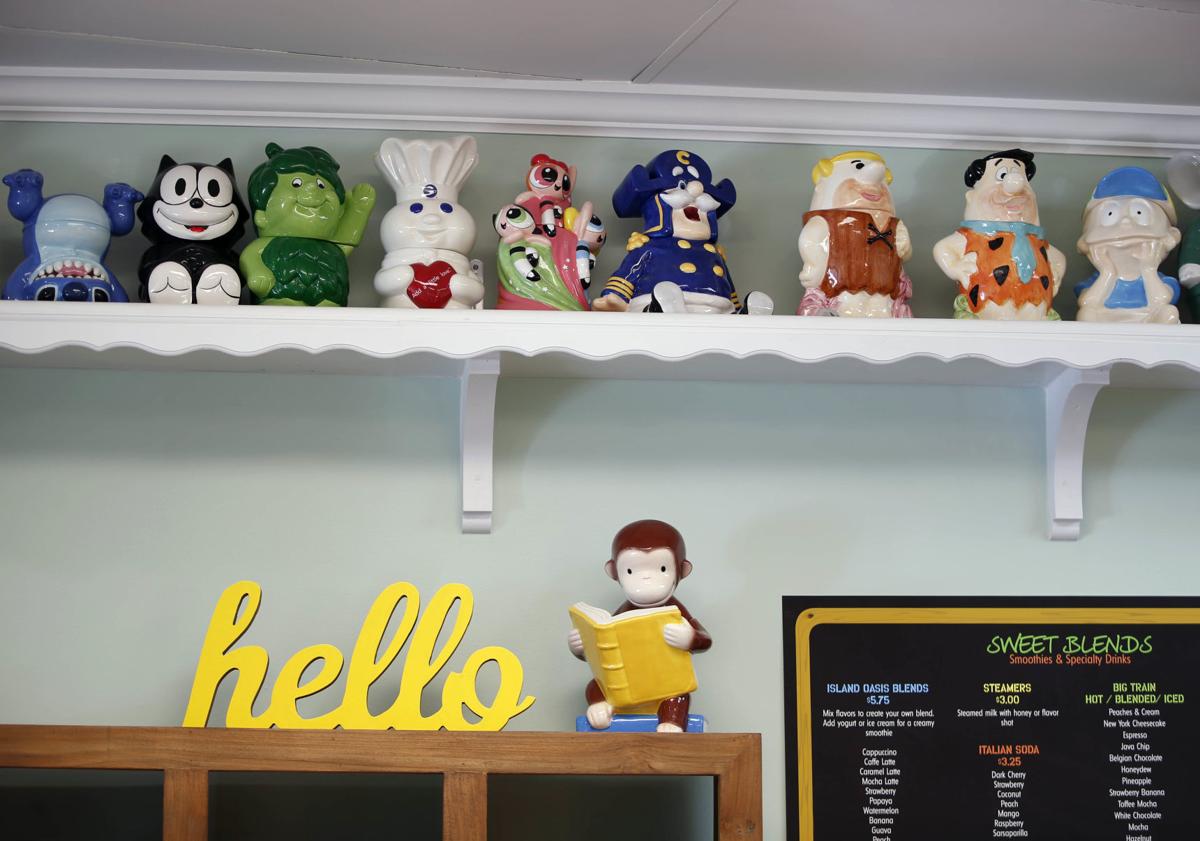 Cafe Yum has a collection of about 160 cookie jars that line the ceiling. MATT BARNARD/Tulsa World 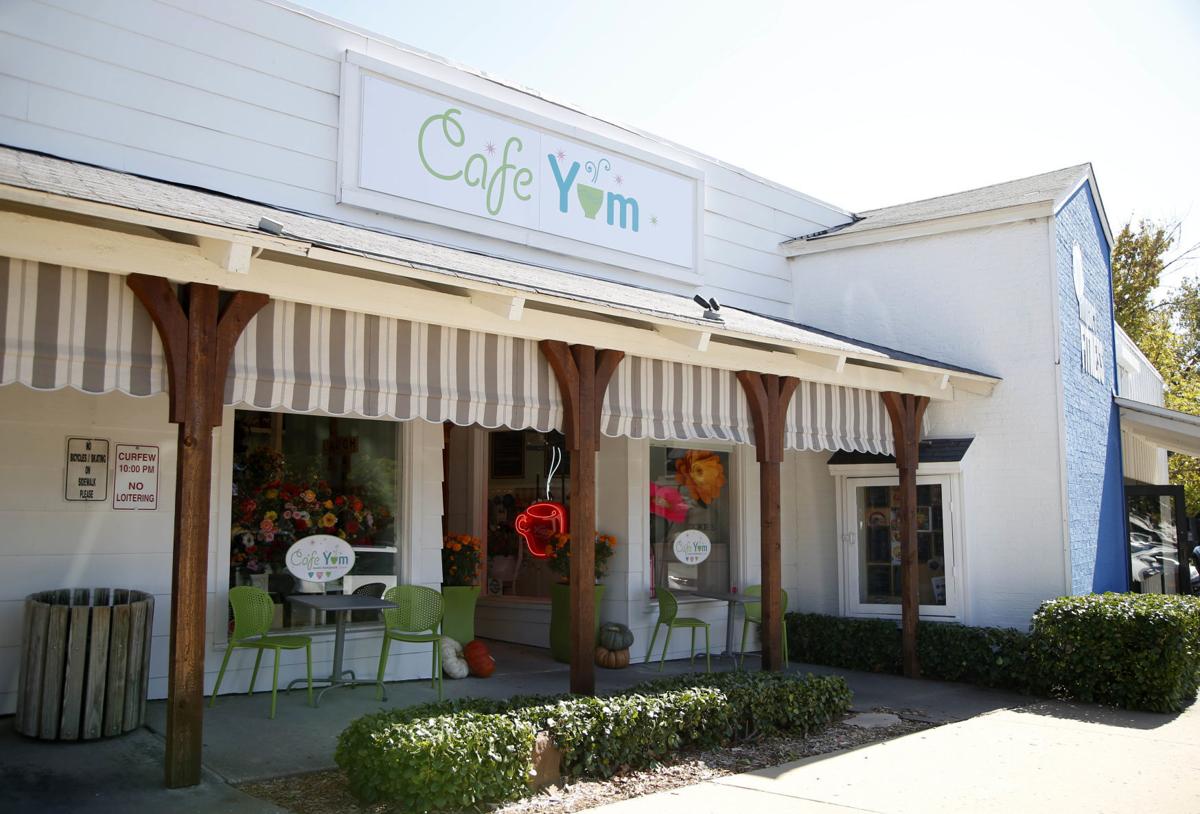 Café Yum is located on the east side of The Farm Shopping Center in a space that formerly held Katy’s Pantry. MATT BARNARD/Tulsa World

A collection of cookie jars lines the shelves above the order counter at Café Yum. MATT BARNARD/Tulsa World

Cafe Yum has a collection of about 160 cookie jars that line the ceiling. MATT BARNARD/Tulsa World

Café Yum is located on the east side of The Farm Shopping Center in a space that formerly held Katy’s Pantry. MATT BARNARD/Tulsa World

After Tracy and Dr. Brian Ogg had moved back to Tulsa following a 20-year absence, Tracy was unpacking a box of her extensive collection of ceramic cookie jars.

“I told my husband I needed a place for the cookie jars and did he think maybe I should open another café,” Tracy said. “He said, ‘Sure.’”

And that was that. Café Yum made its debut in The Farm Shopping Center a few months ago in a cozy space that formerly held Katy’s Pantry.

The Café Yum story goes back to 2011 in the Grand Lake community of Grove, where Brian Ogg, an orthopedic surgeon, was practicing. Tracy Ogg opened Café Yum in a quaint, 100-year-old building that at one time was a home and office for one of Grove’s early-day lawyers.

She sold it a year later, and the new owner sold it again in 2017. The latest owners renamed it Café Yum II and had the misfortune of watching it burn to the ground in February 2018 from an apparent electrical fire.

“After I sold it, we moved to Fort Smith, Arkansas, and I haven’t had a café since, until now,” Ogg said.

She is operating Café Yum with her eldest of five children, Brittney Charles, and a small staff.

It is worth a trip to Café Yum just to stand in the middle of the room and figure out just how much food and drink are offered in such a tiny space. It also is fun to see how many of the characters you can identify on the cookie jars, which line a shelf near the ceiling.

I counted 160 cookie jars, give or take, including such favorites as Donald Duck, the Cracker Jack sailor, Mr. Peanut, Lulu, Mickey Mouse, Laurel and Hardy and many more modern characters.

“I got my first one, Curious George, many years ago, and it just took off from there,” Ogg said. “I have more at home that I will trade out with some of these once in a while.”

More importantly for us, the food lived up to the standards of the cookie jars. We sampled as many items as we could, and we took a few more home, and everything was delicious. On top of that, the most expensive item on the menu was $9.25.

We were going to sample two sandwiches, but I misordered one — my wife’s, of course — so I had to order an additional one. We wound up with Slice of Life, Love at First Bite and Outta This World ($8.50 each with chips), and I would gladly order any of the three again.

We noted several cross-over items on each sandwich, and the most important, I think, was the cream cheese, a sneaky good addition that helped pull everything else together.

We also shared bowls of a creamy potato leek soup and white chili ($5.95 each). Both were excellent on a cool evening. The chili was not spicy and more like a comfort food with black beans, corn, tomato and chicken in a creamy broth.

Among other items we snagged from the grab-and-go cooler were a tasty Dutch coleslaw ($3.50) with green and red cabbage, thin-sliced carrots, cider vinegar, sugar and seasonings; a fruit bowl ($3.50) with kiwi, oranges, strawberries, pineapple, blueberries and blackberries, and a piece of moist Boston cream pie ($3.25).

Some customers, especially children, like to order an undecorated cupcake and choose an icing and toppings from among 40-plus choices. They are $3.75 with one topping, and 50 cents for each additional topping.

Beverages include a full line of coffees, teas, bubble teas, smoothies, Italian sodas, malts (I had a vanilla malt that was excellent) and steamers. That’s not to mention sugar snow, a shaved ice product.

Health-conscious diners will like the Yum bowls with names such as Buddha bowl, hippie bowl, Mediterranean bowl and salad stuffed sweet potato bowl — all meatless dishes.

Cafe Yum does a lot of takeout business. One communal table will seat eight dine-in customers.

In addition to the cookie jars, Café Yum is decorated with a large faux flower arrangement in the front window, and two arrangements in oversized coffee cups. Two elaborately costumed witch characters sit on one of the display cases.

“Wait until you see the Christmas tree,” Ogg said. “It’s going to look beautiful in here.”