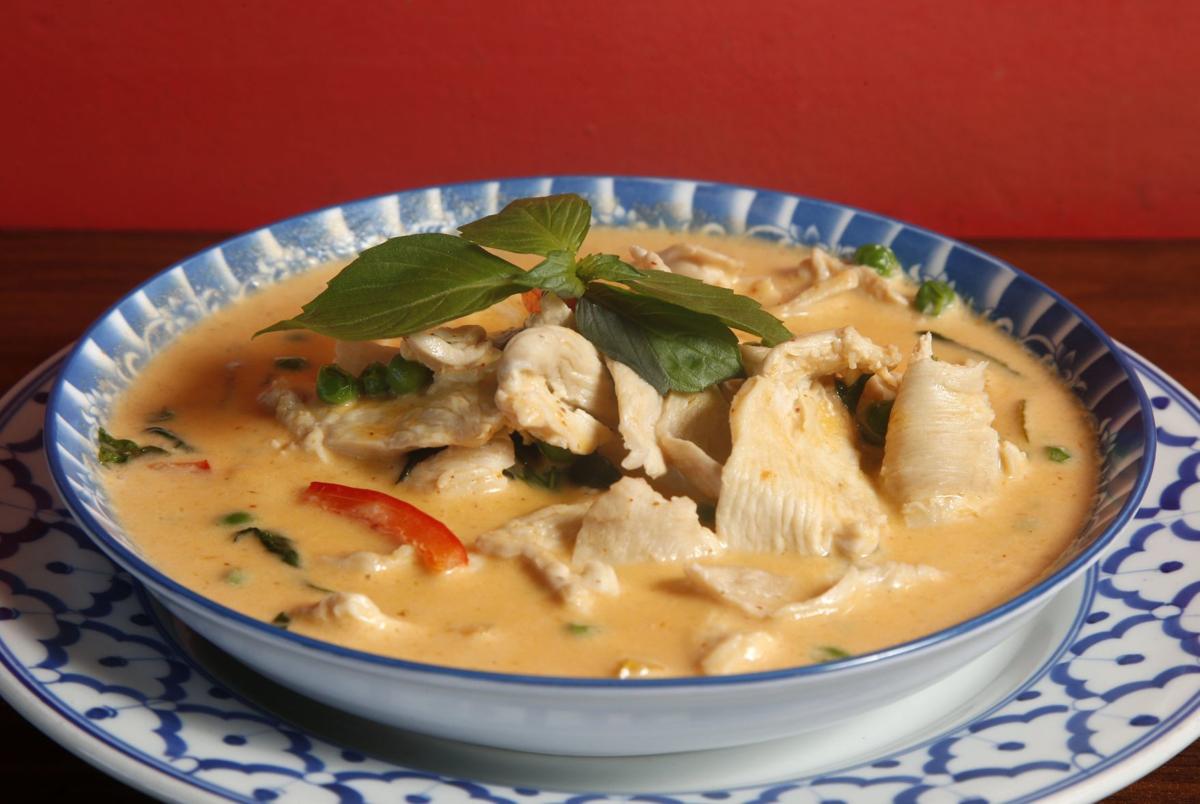 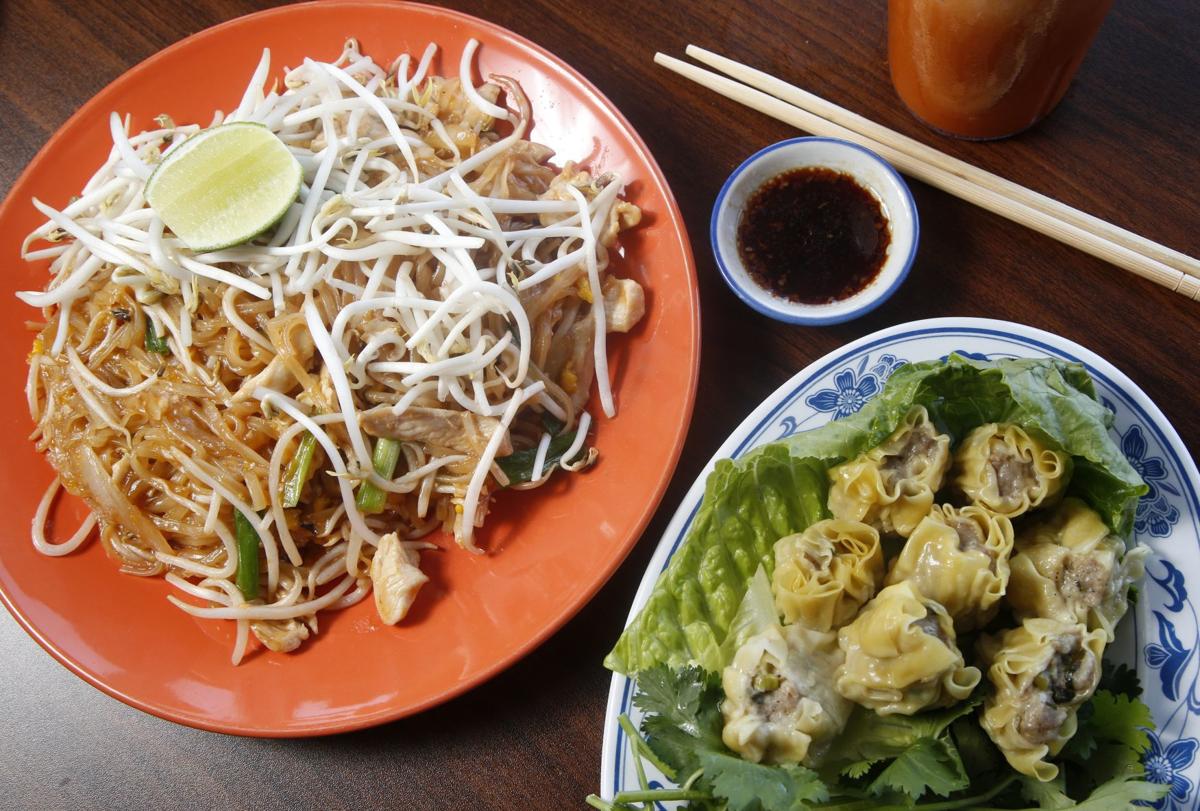 Pad Thai (left) and steamed pork dumplings are among items on the buffet at JK’s Thai Buffet in Broken Arrow. MATT BARNARD/Tulsa World 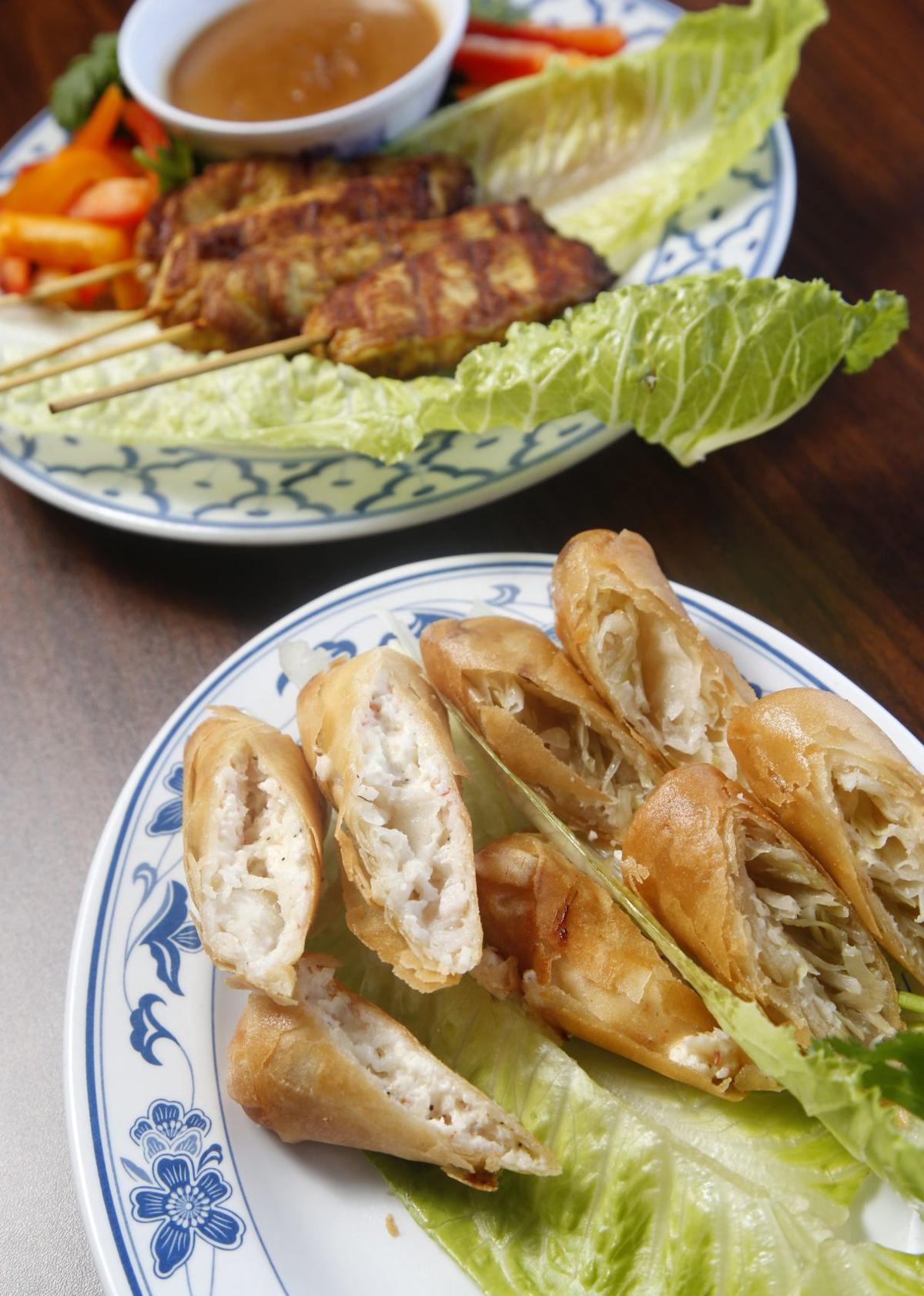 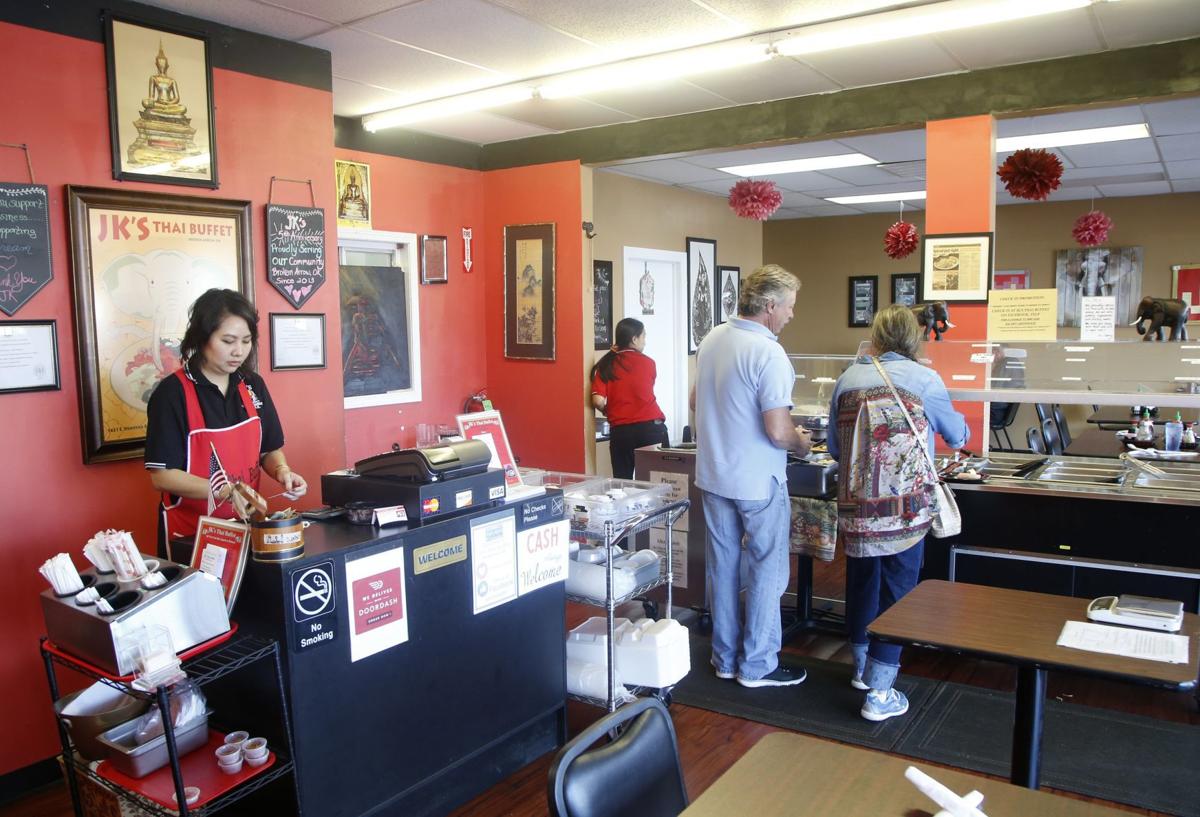 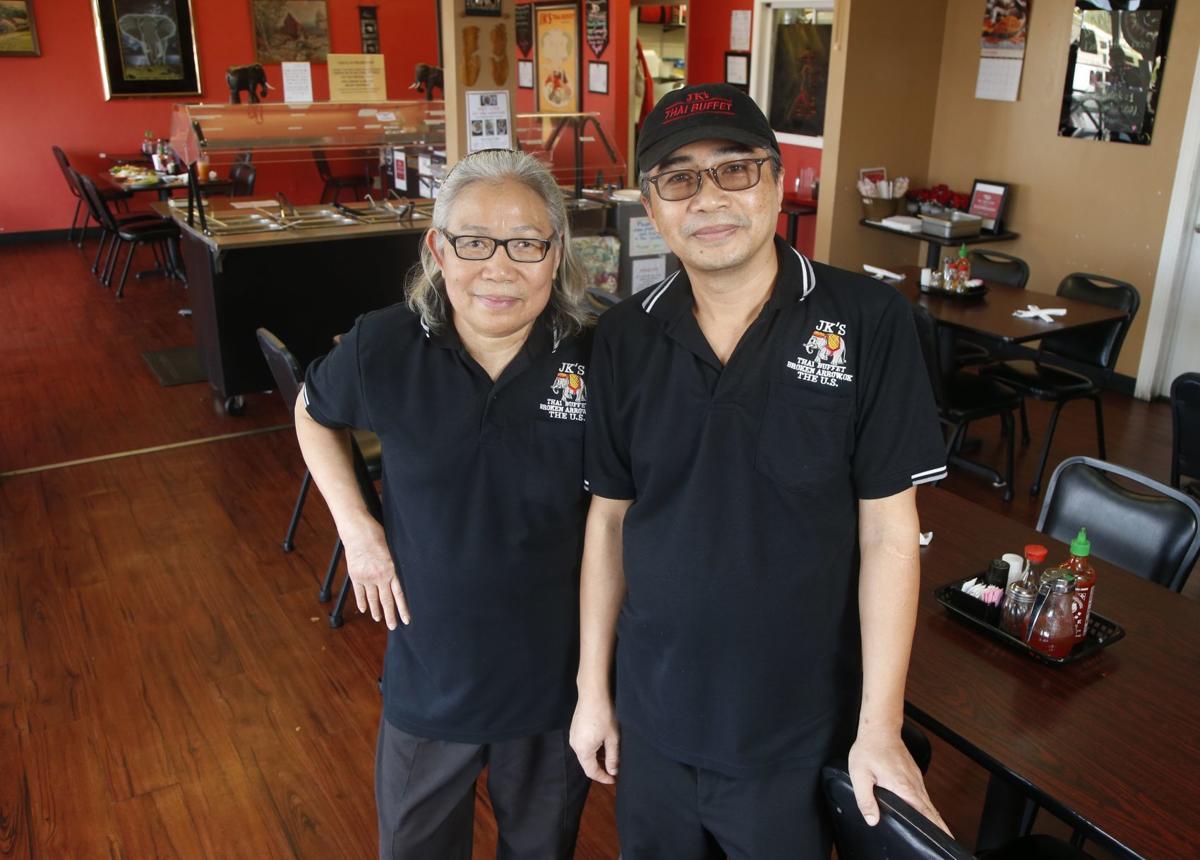 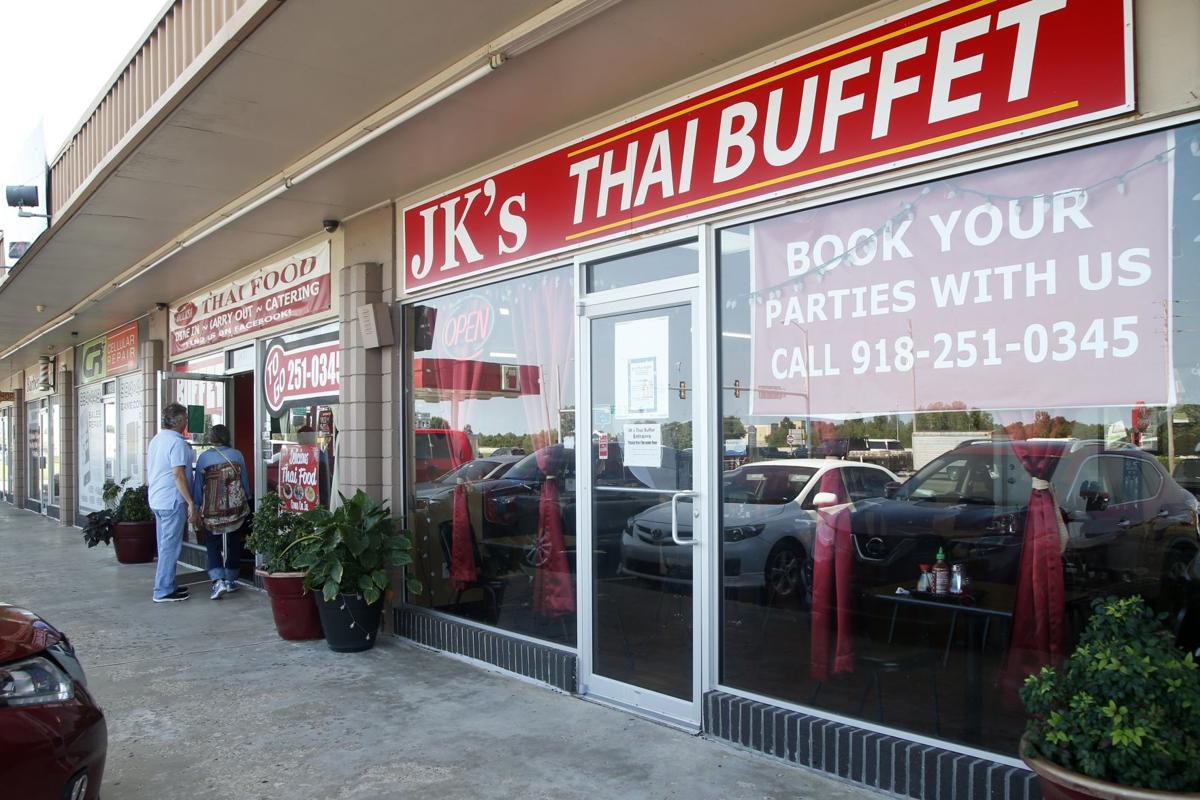 Pad Thai (left) and steamed pork dumplings are among items on the buffet at JK’s Thai Buffet in Broken Arrow. MATT BARNARD/Tulsa World

It was interesting to see two or three American families dining together recently at JK’s Thai Buffet in Broken Arrow.

It was somehow gratifying to watch the children. Some were just old enough to serve themselves at the buffet, and all of them handled chopsticks like pros. One has to commend their parents.

JK’s Thai Buffet opened six years ago in October. It has changed owners and more than doubled in size since we last reviewed it, but the quality of the food and warm hospitality has remained unchanged.

The pad Thai — we ordered it so we could take part of it home — included a huge mound of noodles loaded with chunks of chicken, bean sprouts, egg and green onions in a slightly sweet sauce.

Both of the egg rolls were tasty. I can’t say if any of the crab was real, but it had an authentic taste and made a terrific appetizer. The rolls came with a typical sweet-and-sour sauce. My wife likes hot mustard with egg rolls, but it has been our experience if it isn’t offered, it usually isn’t available. Still, she inquired about it, and just a few minutes later a small bowl of hot mustard arrived.

I tried as many items as I could from the buffet and was happy with all of my selections.

Thai yellow chicken curry was filled with chunks of chicken and tender potatoes in a mild sauce, and panang curry chicken had a citrusy flavor, possibly from lemongrass.

Chewy steamed dumplings were filled with pork, cilantro and Thai spices; moist fried rice was dotted with carrots, and tom kha kai (chicken in coconut soup) had a pleasing flavor. Thai basil beef was good but not nearly as spicy-hot as I anticipated it would be.

Chicken satay (chicken on a stick) came with a thick, heavy peanut sauce that tasted more like melted peanut butter.

The dining room was expanded in 2015 from its original 28 seats to more than double that. Walls are decorated with both American and Thai paintings.

The new owners, Pat and Songsak “Aey” Saenpoch, came to the U.S. from Thailand a few years ago when Pat got a job in the liberal arts department at the University of Texas at El Paso.

“My husband was a mechanical engineer, but he also worked part time in an El Paso restaurant,” Pat said. “My family had a restaurant in Thailand, so we knew something about running a restaurant.”

She said relatives in Owasso introduced them to the former owners, the Khongthae family, who came to Tulsa in 1996 to work at the now-closed Bangkok Thai Buffet.

“Some time after we met them, they asked if we were interested in buying the restaurant,” Pat said. “Grandmother (Jaratsri) still works here with us, and Jaruwan comes in most nights to help.”

Pat said the menu is much the same as it always has been, though Aey, who does most of the cooking, can customize any dish off the menu.

“He can make any dish mild or hot, and he likes to use a lot of different types of chilies — fresh, dried, roasted, marinated,” she said.

“I know he likes this better than being a mechanical engineer; it is less stress,” she said. “And I know he is happy when he makes our customers happy.”