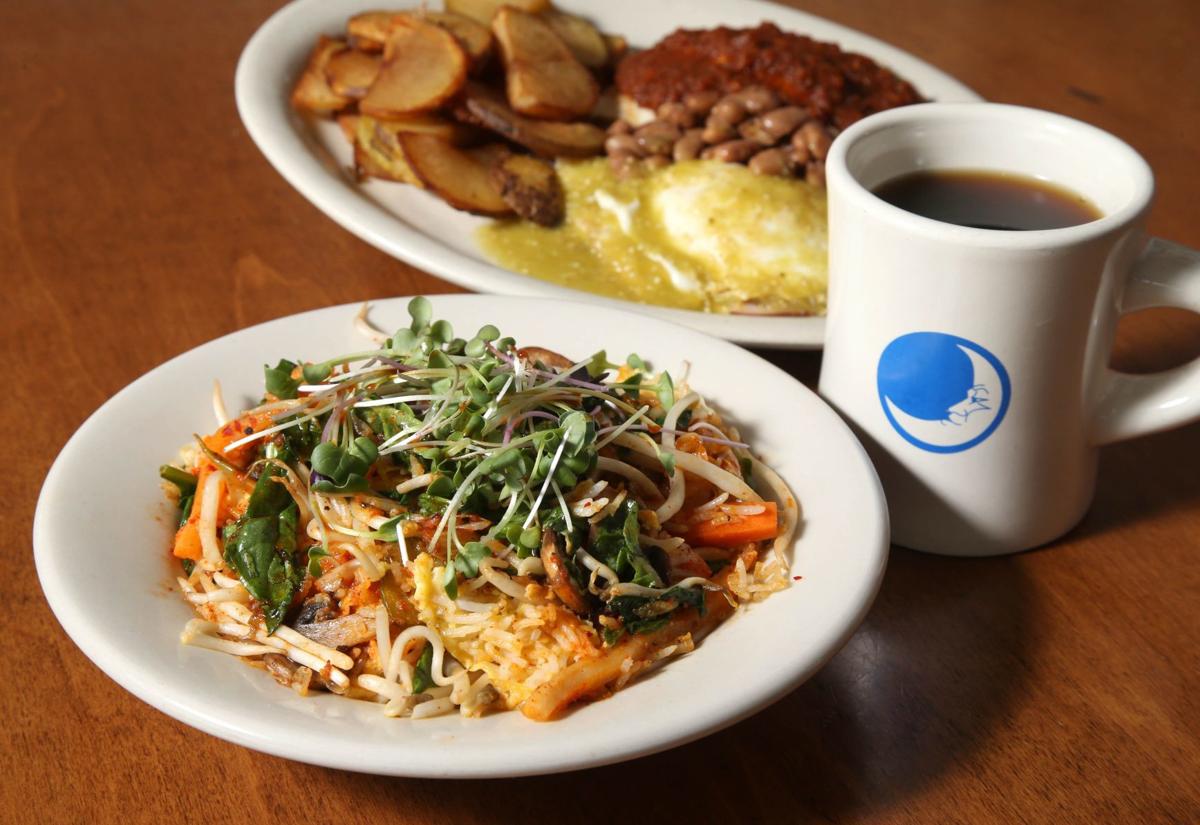 The Hippie Scramble (foreground) and Divorced Eggs are among popular specials that show up on weekend brunch menus at Blue Moon Cafe. 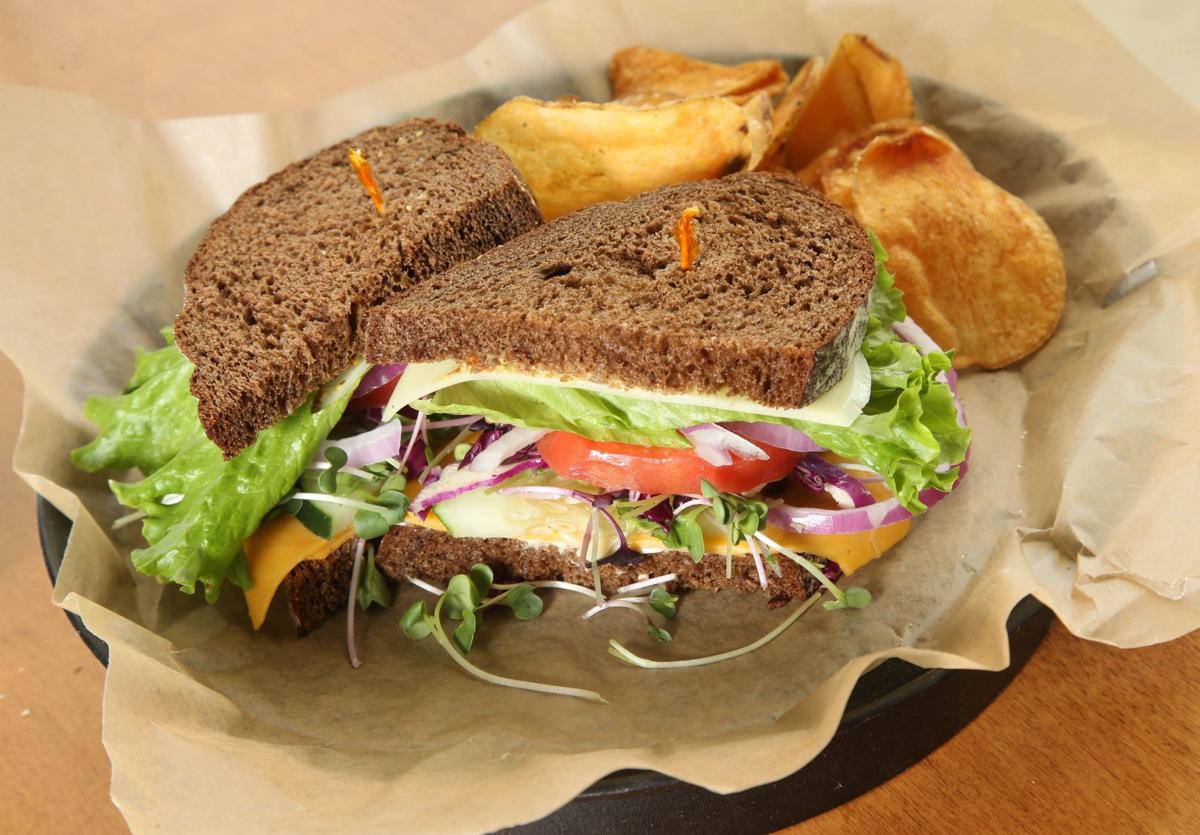 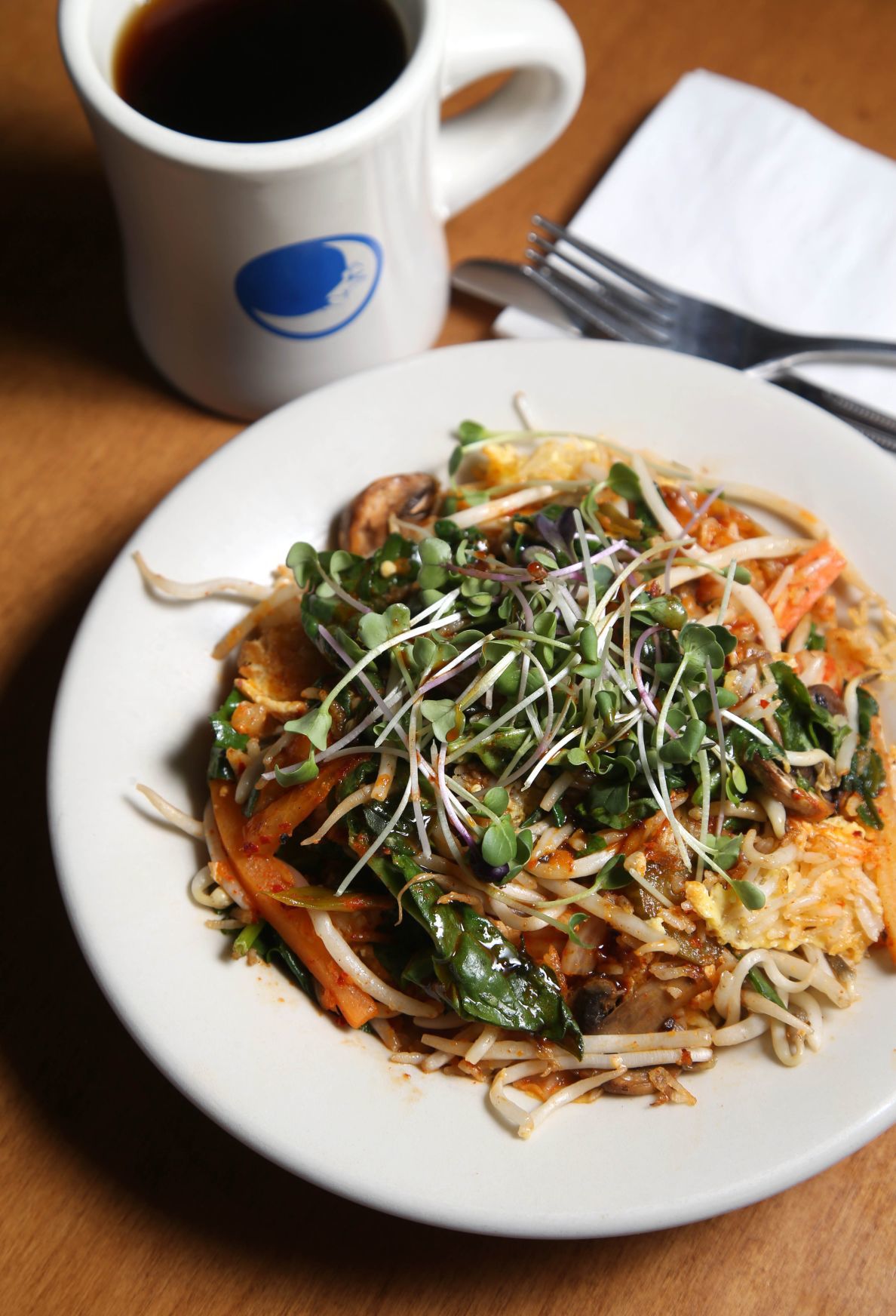 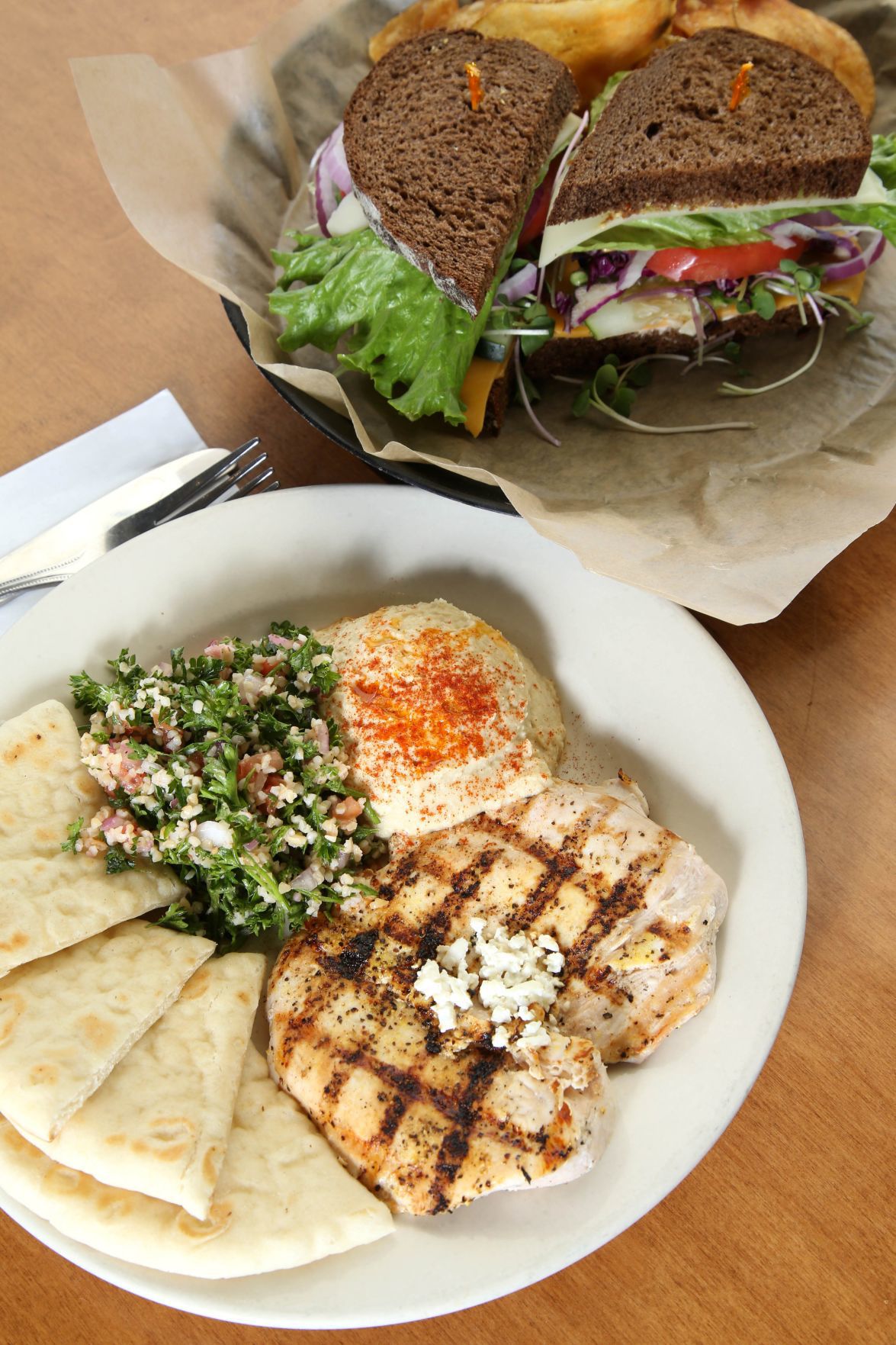 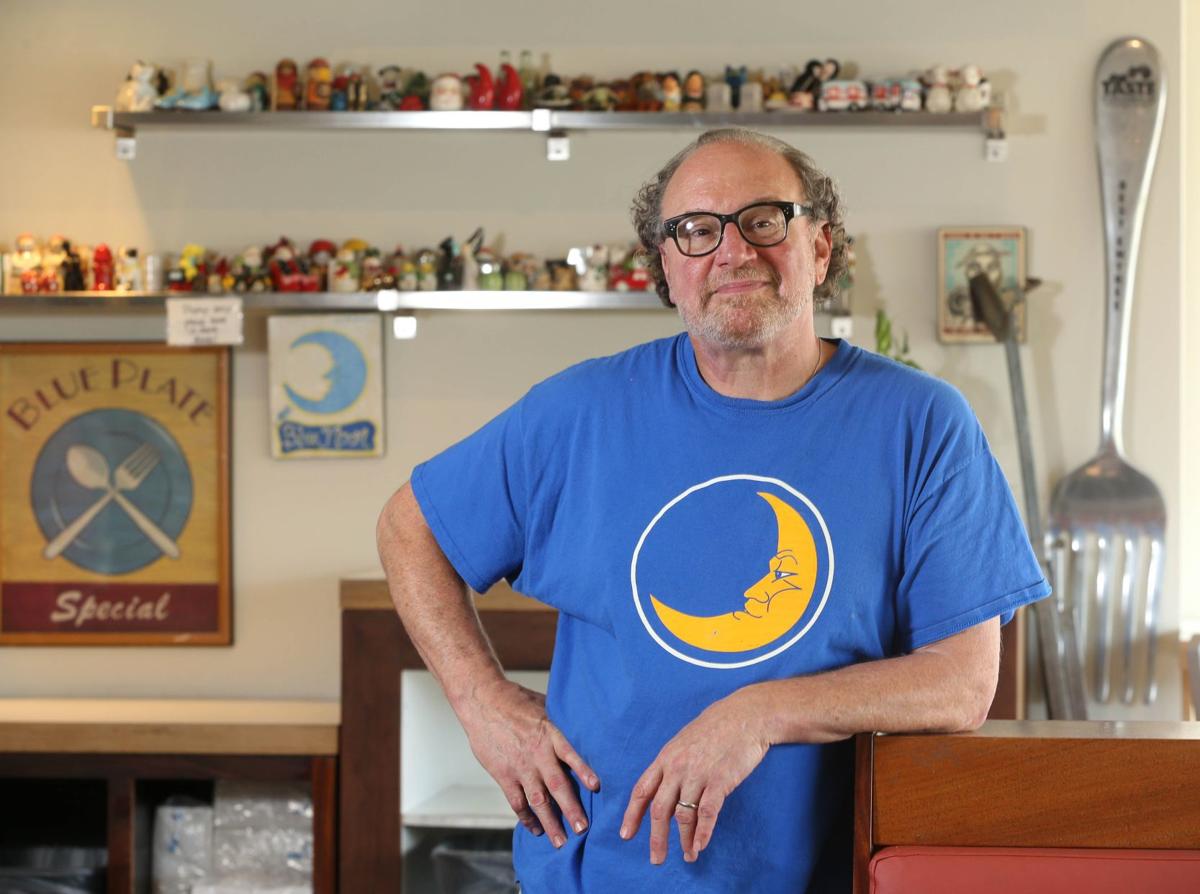 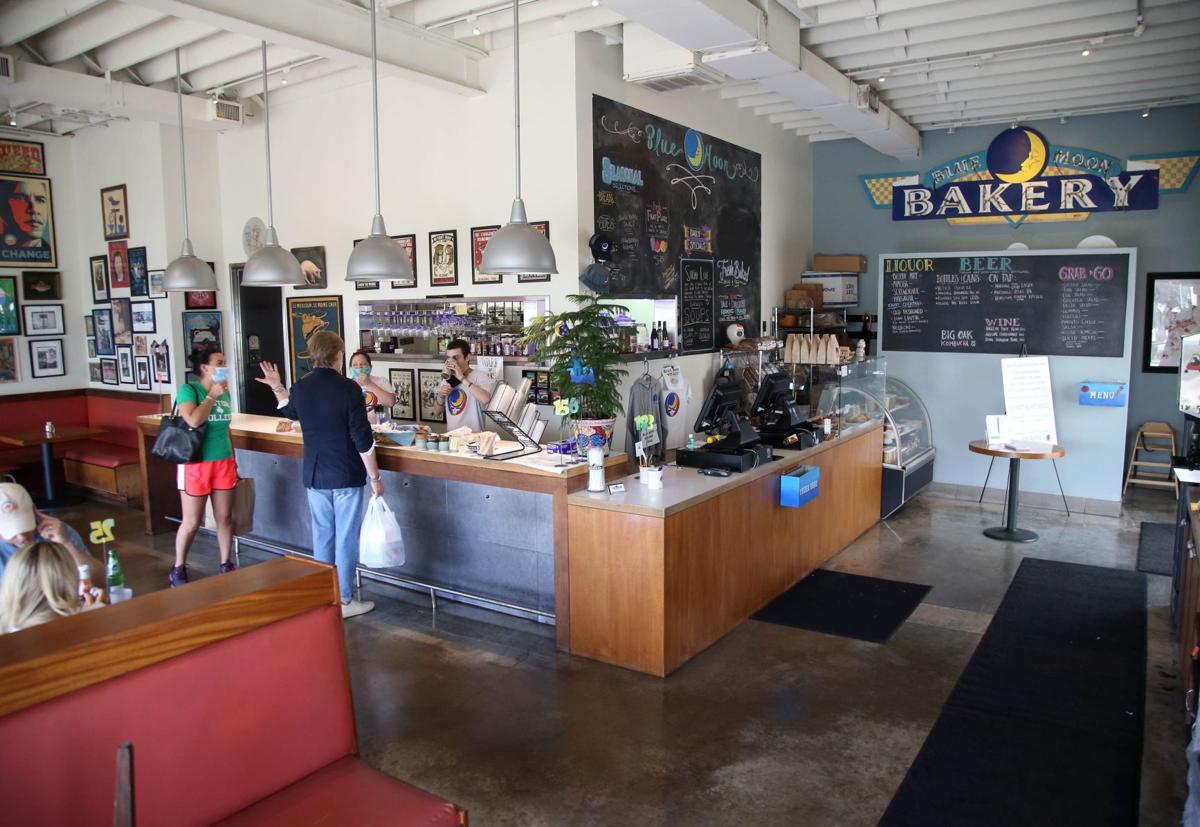 Walls at Blue Moon Cafe are filled with a wide assortment of music-related posters and photos. MATT BARNARD/Tulsa World 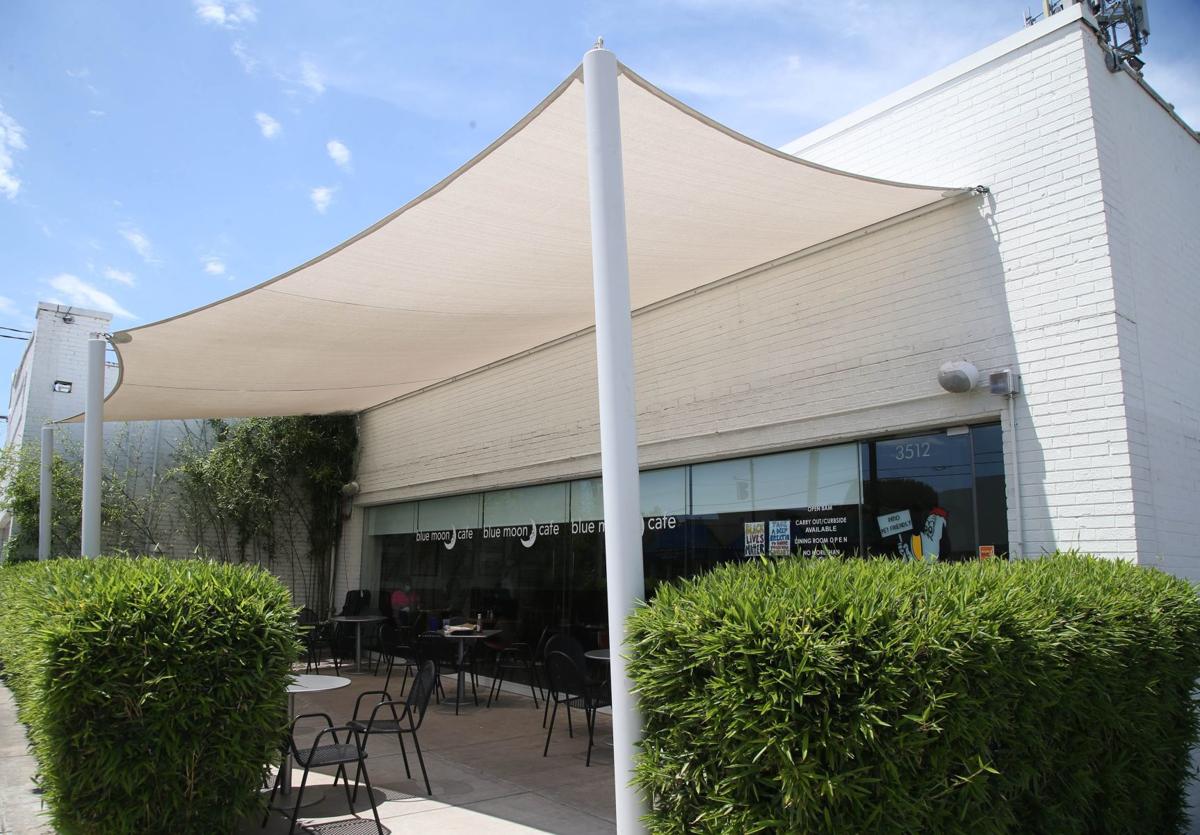 The covered patio at the Blue Moon Cafe is a popular spot to dine al fresco in Brookside. MATT BARNARD/Tulsa World

The Hippie Scramble (foreground) and Divorced Eggs are among popular specials that show up on weekend brunch menus at Blue Moon Cafe.

Walls at Blue Moon Cafe are filled with a wide assortment of music-related posters and photos. MATT BARNARD/Tulsa World

The covered patio at the Blue Moon Cafe is a popular spot to dine al fresco in Brookside. MATT BARNARD/Tulsa World

Blue Moon Cafe chef-owner Alan Fusco does limited cooking during the week these days. He bakes the breads but leaves most of the cooking to his talented staff. Except on weekends.

“I like to get on the line and cook with the kids for our weekend brunches,” Fusco said recently. “Restaurant people like cooking. That’s why we get into the business.

It is common to find a number of those specials have an Asian or Hispanic flavor profile.

“I’ve been at this location for 10 years, and most of my crew has been here at least eight years,” Fusco said. “I’ve learned most of my Hispanic dishes from them, and they have become some of our most popular specials.”

A recent special was Divorced Eggs, a dish regular customers always like to see on the menu. It includes two corn tortillas filled with grilled ham and cheese, topped with over-easy eggs and separated by pinto beans. Salsa ranchero is ladled on one side and salsa verde on the other, and it comes with a side of breakfast potatoes.

“I also love Asian food, and I like to shop at Nam Hai (International Market),” Fusco said. “We make our own kimchi and sauces. I like to use things like mung sprouts to give a dish a little crunch.”

Kimchi, essentially fermented cabbage and seasonings, can be made dozens of ways. The Blue Moon version is spicy but not over the top. Gochujang has a red chile base and is thick, spicy and pungent. Kimchi and gochujang have Korean origins.

It isn’t all Asian and Hispanic, though.

“I got hold of a lot of Swiss chard, and I probably will use that for a quiche with soft cheddar,” Fusco said. “Basil is coming in like a storm, so we will start doing stuff with basil pesto.

“A lot depends on what I come up with for the weekends. I like to keep things tied to the weather and as seasonal as possible.”

The lunch fare features a variety of salads, hot and cold sandwiches and dishes such as Mediterranean chicken, fish tacos, shrimp cocktail and burgers.

“We like to take care of our vegetarian and vegan friends, too,” Fusco said.

Blue Moon also has local beers and wine. For restaurants that offer only three wines, they usually are an uninspired afterthought. Not so here. The choices are Angeline pinot noir and chardonnay and Honig sauvignon blanc, all nice wines.

Fusco’s wife, Betsy, and a son, Sam, often are seen working the front of the house.

Alan Fusco was born in Brooklyn, reared in Columbus, Ohio, graduated from high school in Oklahoma City and went to college at Oklahoma State.

“My father was a civilian worker with the Air Force, so we moved around some,” he said. “It just happened that a lot of my best college friends were from Tulsa, and that’s how I ended up here.”

In the late 1970s and 1980s, Fusco was a huge fan of the Grateful Dead, and posters from the iconic group are among many music–related posters and photographs that fill the walls at Blue Moon.

“Back then, you could catch shows in Austin, Dallas, Oklahoma City, Kansas City and St. Louis in a 10-day span,” he said. “They were about $10 a show. You would be surprised to know who some of the Tulsans were who made those concerts.”

Kay and Mike Gresham operated Blue Moon Bakery for 20 years in a tiny spot in Brookside south of the current location. Mike Gresham died in 2004, and Kay sold the business to Fusco. When he expanded the menu, he changed the name to Blue Moon Café.

Featured Scene Video: Tulsa restaurant and bar patios are more popular than ever

For more information go to bluemoontulsa.com