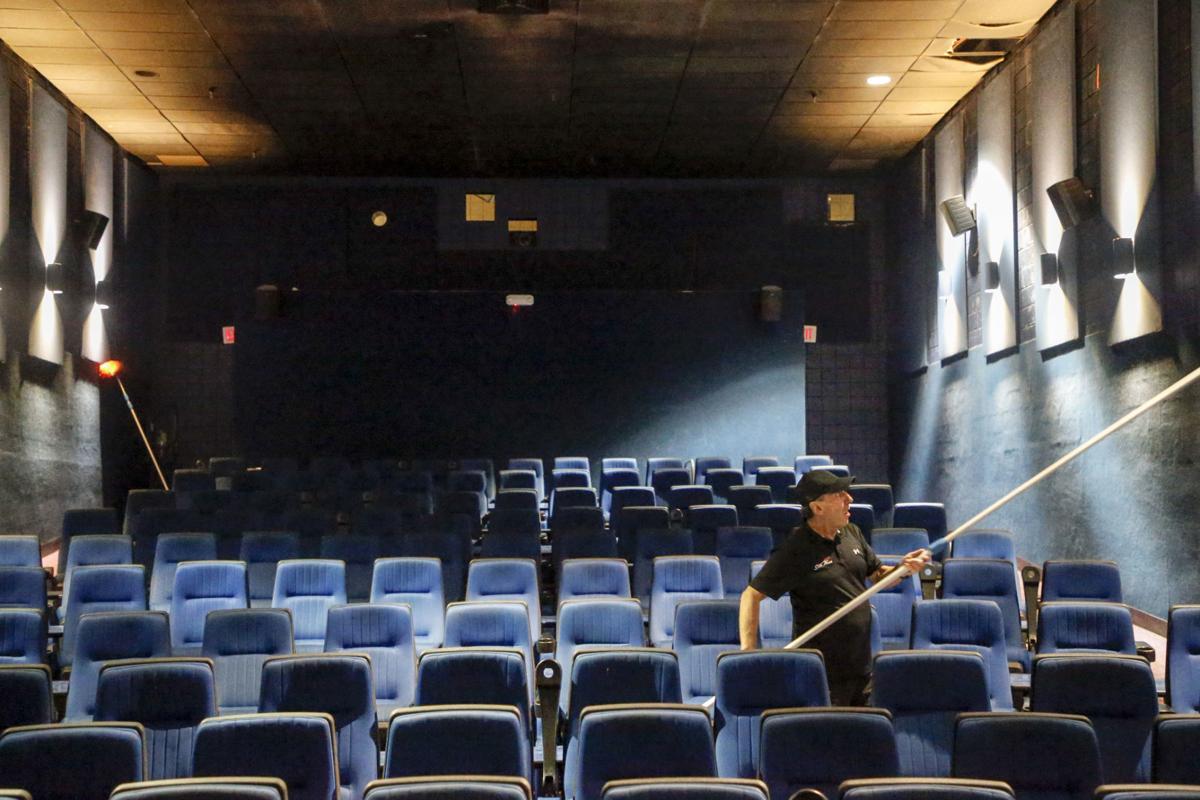 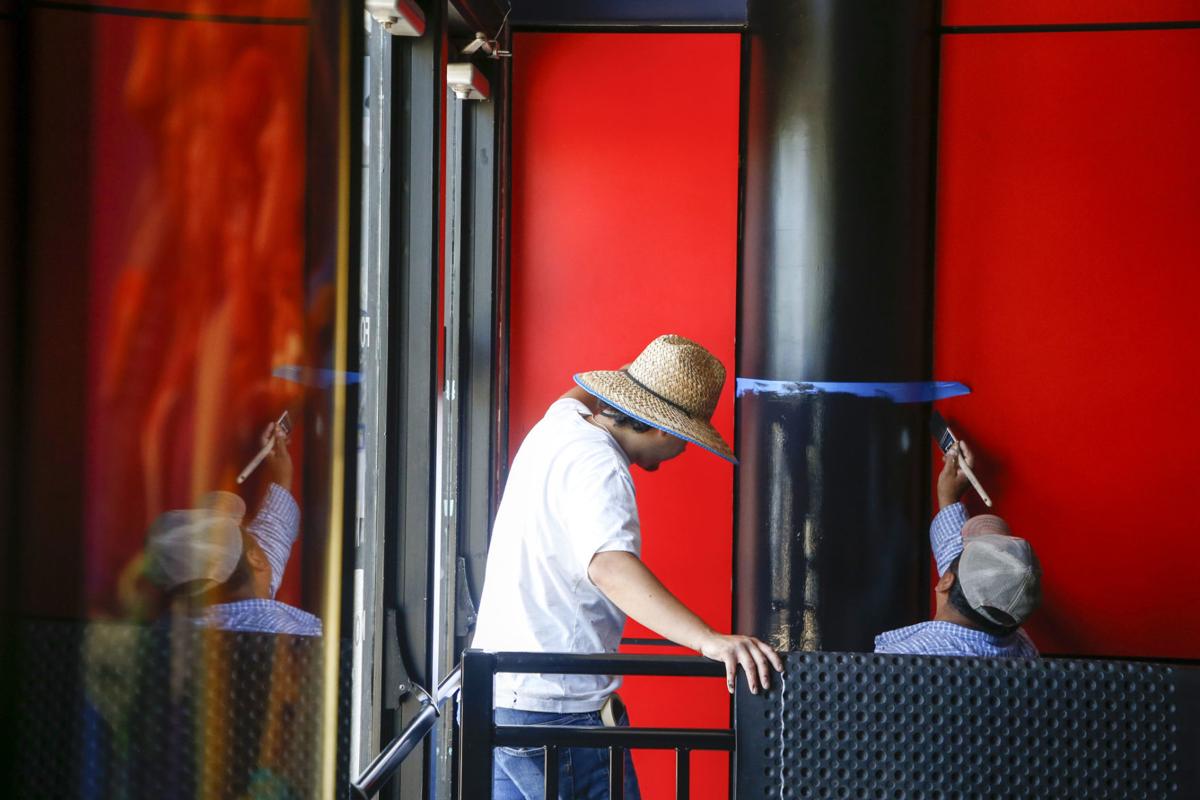 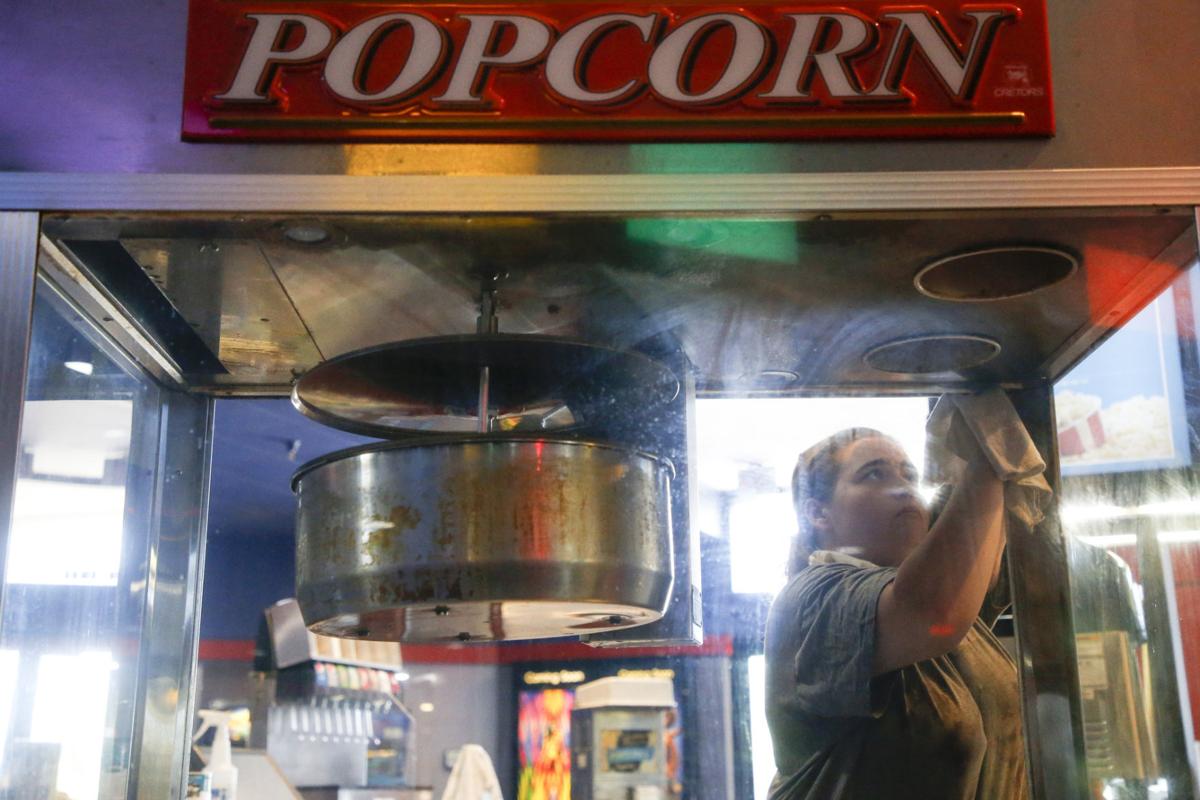 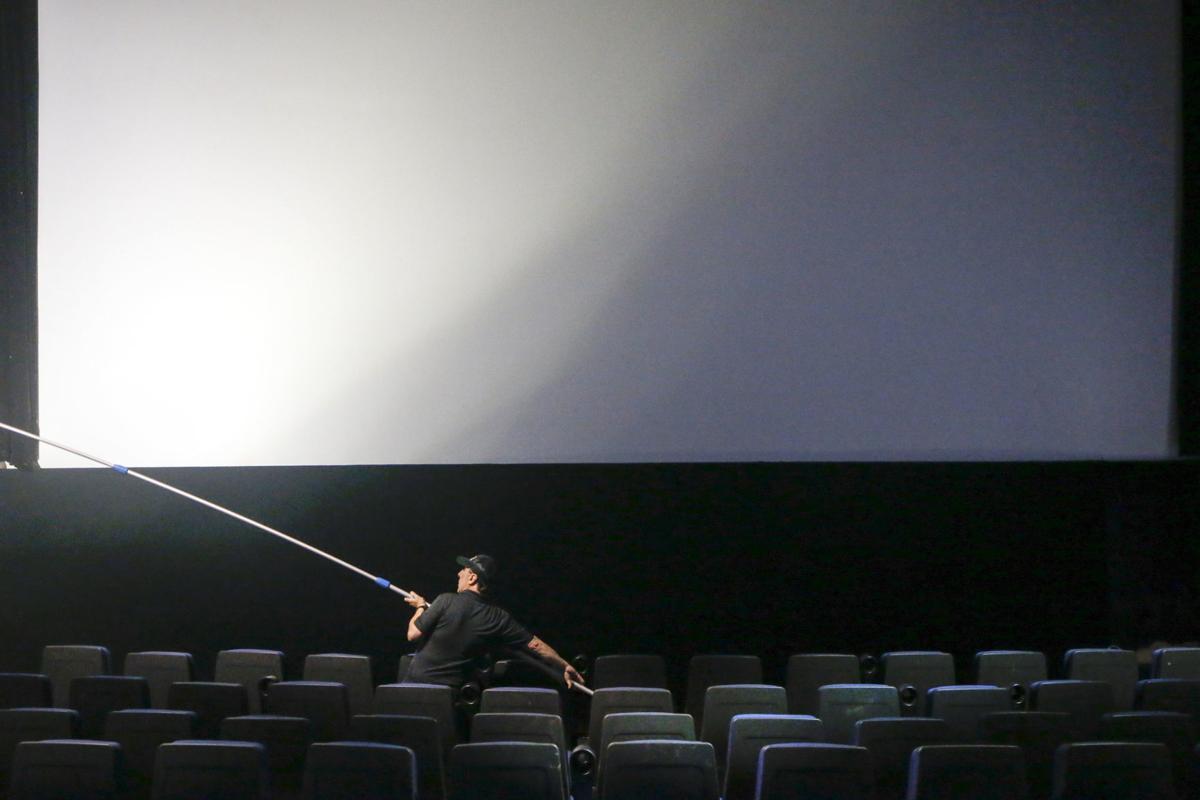 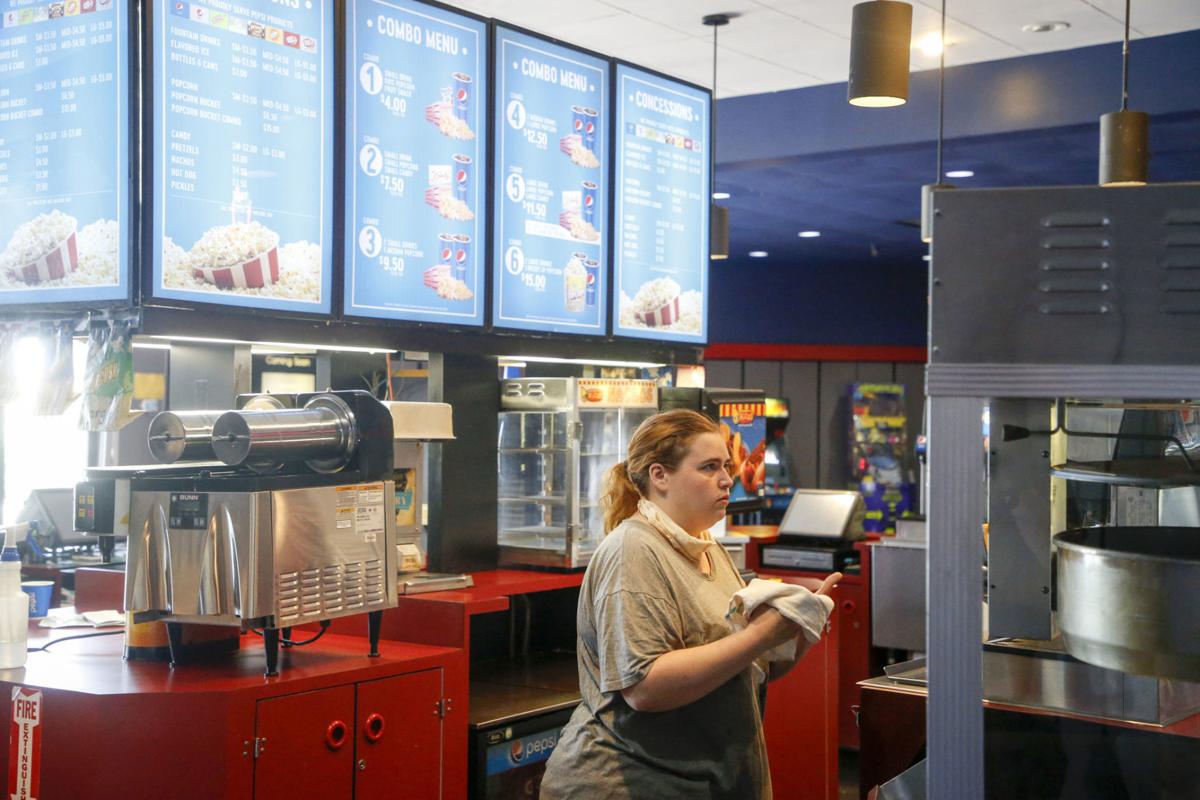 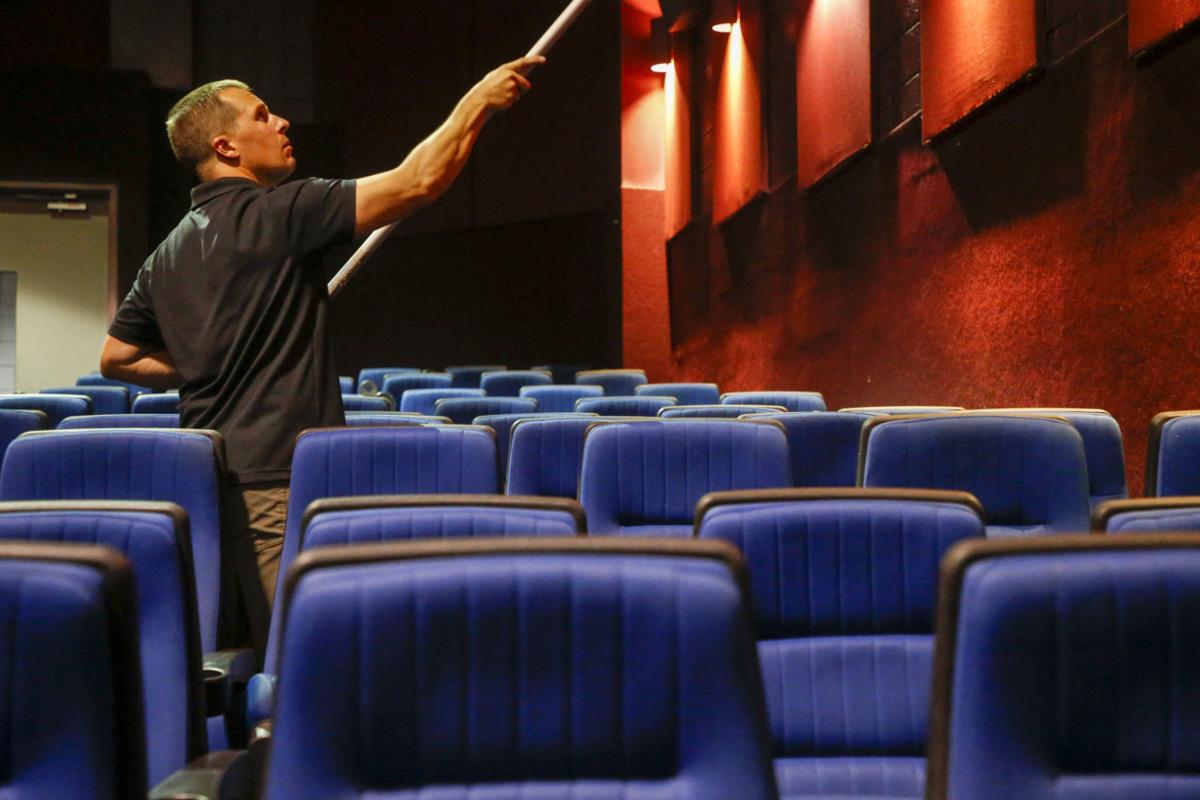 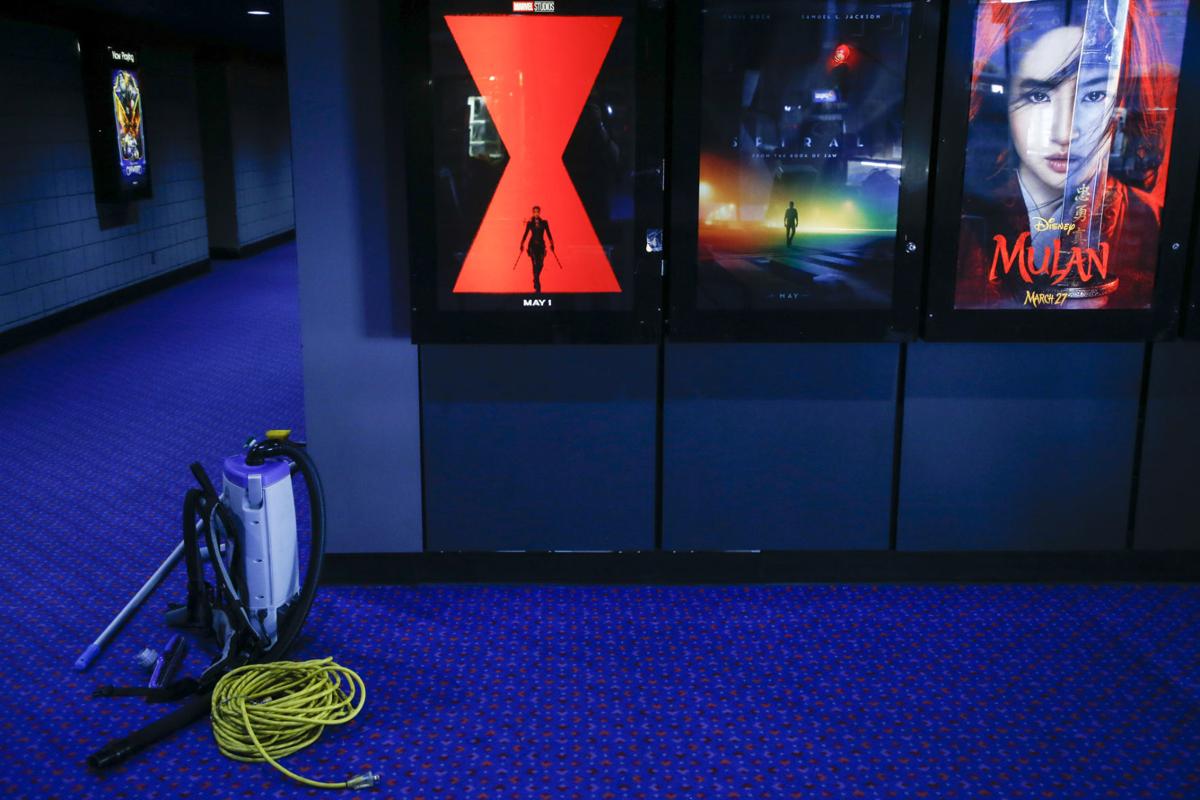 A vacuum sits beneath a row of movie posters for films that have been moved back because of COVID-19 at Eton Square 6 Cinema.IAN MAULE/Tulsa World 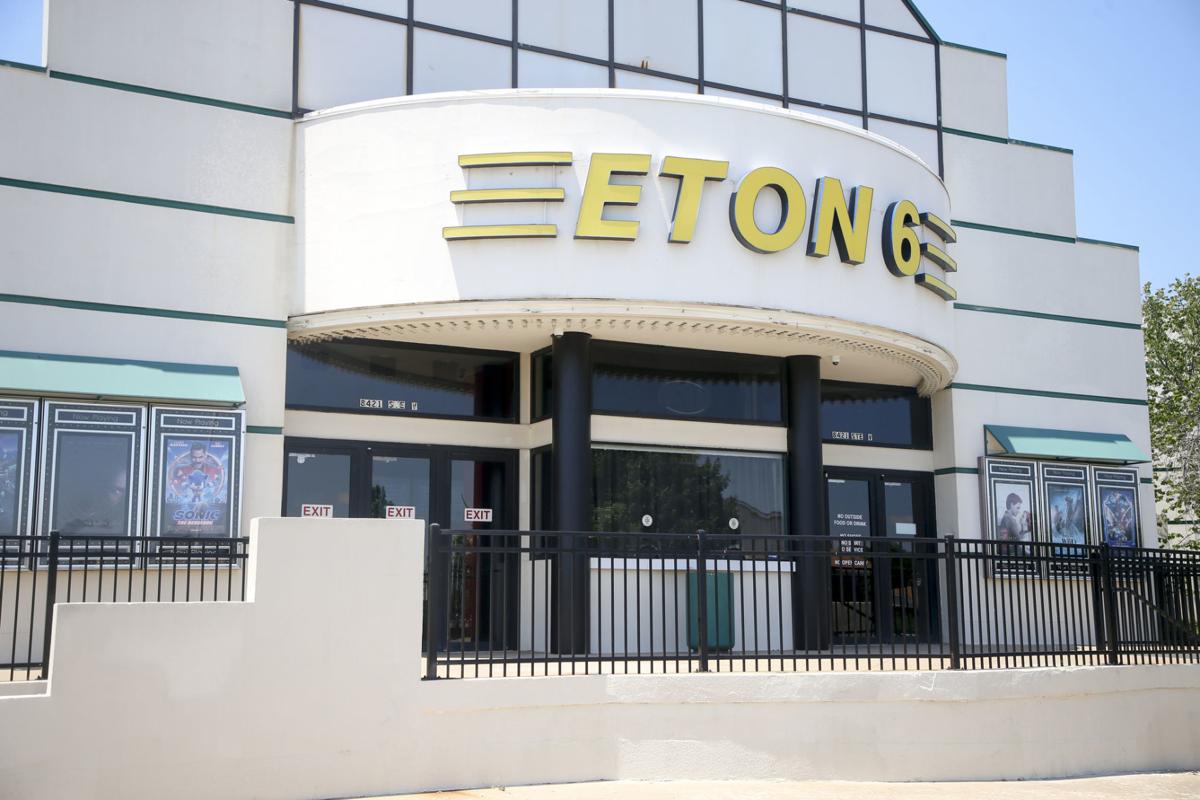 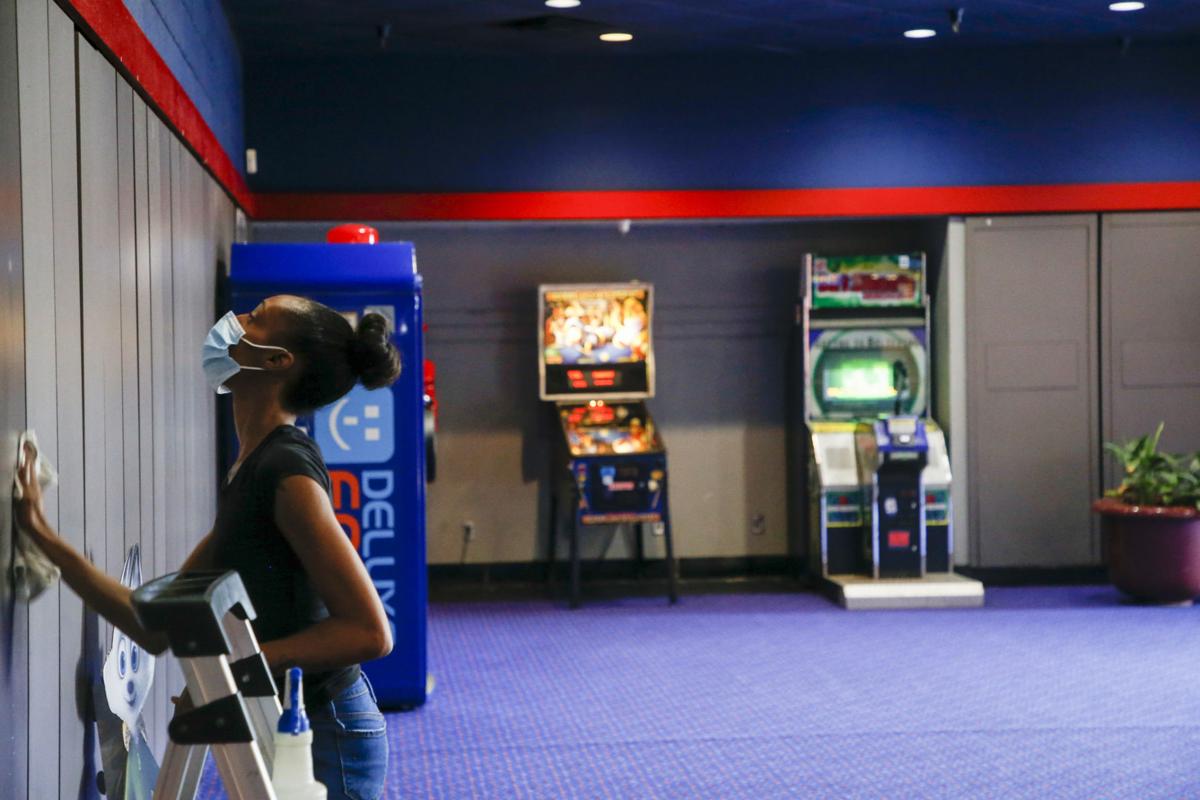 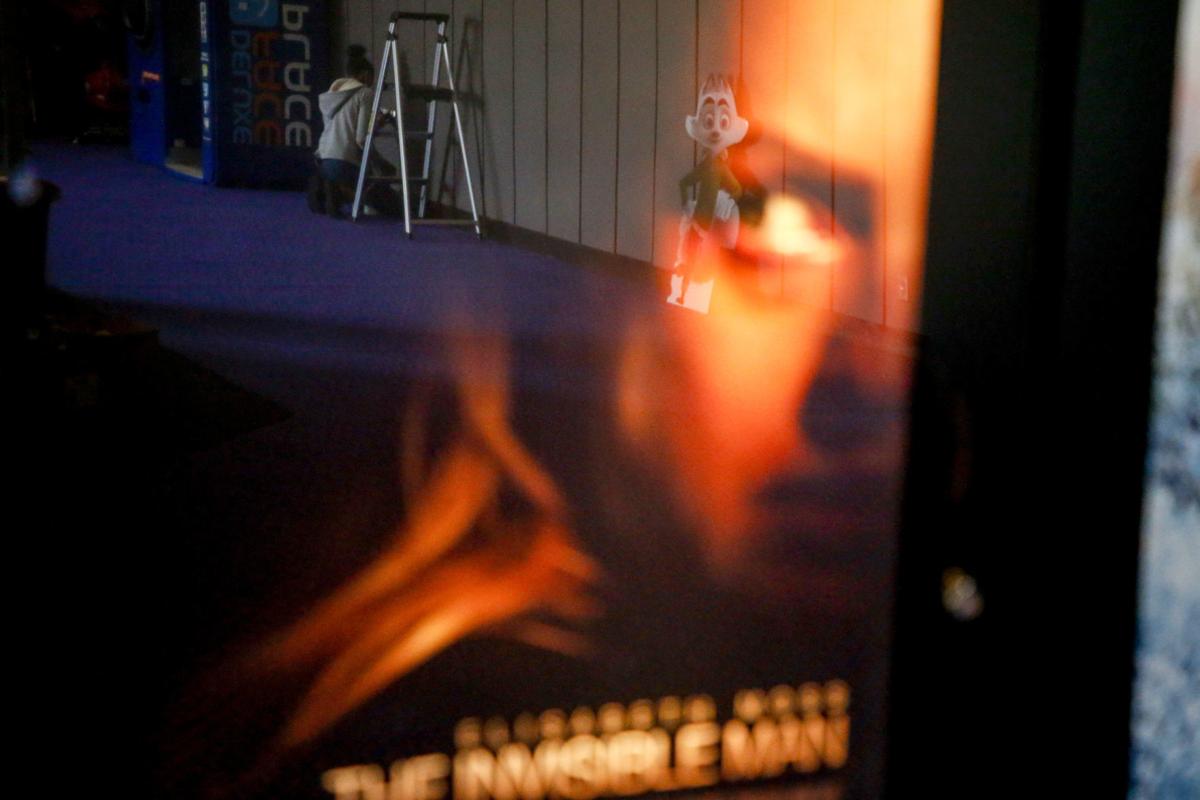 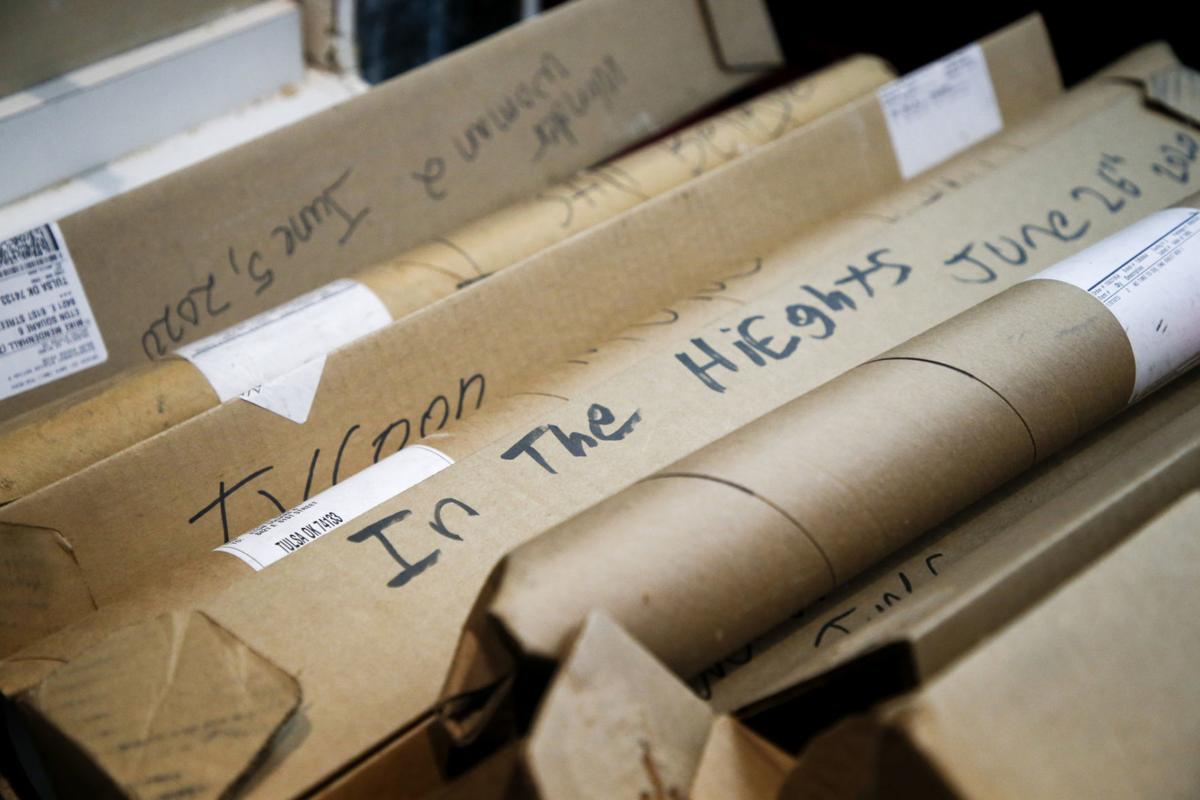 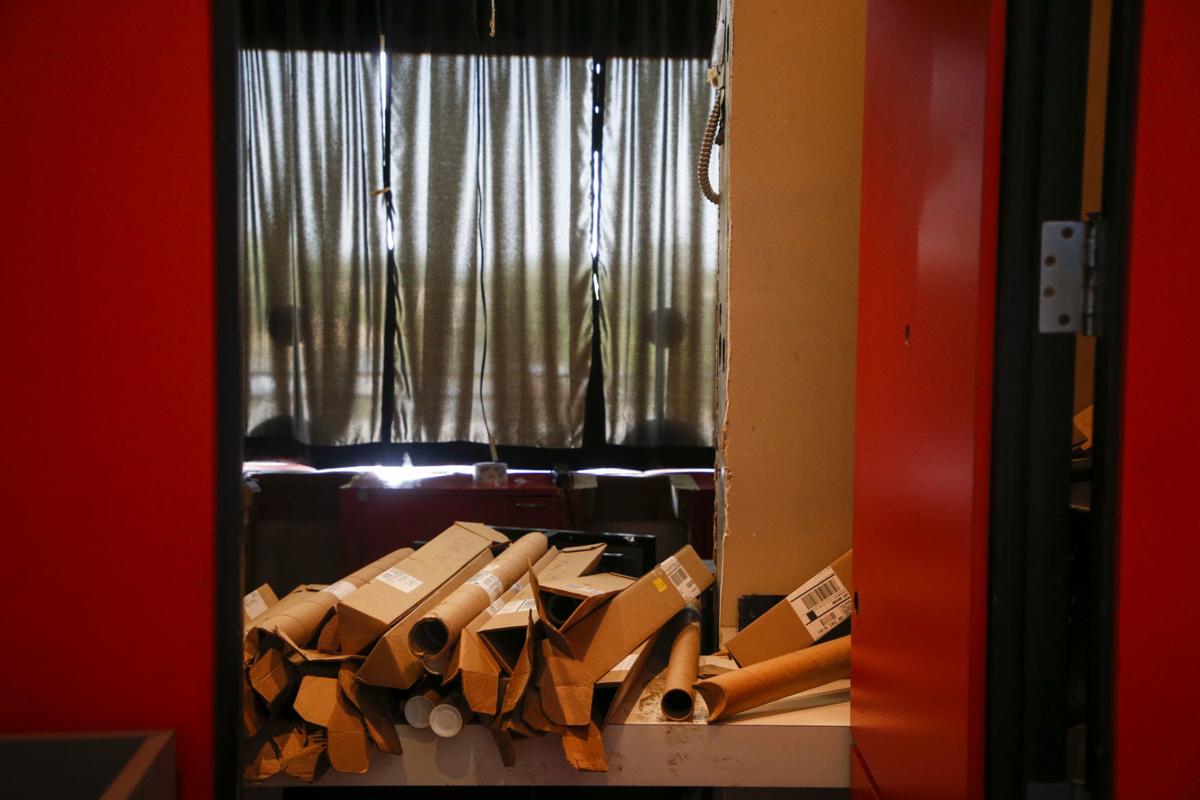 A vacuum sits beneath a row of movie posters for films that have been moved back because of COVID-19 at Eton Square 6 Cinema.IAN MAULE/Tulsa World

The phone rings, breaking the silence inside Eton Square Cinema, at a time when you should be hearing popcorn popping, sound effects from nearby video games and children excited about a movie they are about to watch.

That’s this Friday, which is reopening day for the six-screen theater at 8421 E. 61st St., and the voice is that of Mike Mendenhall, owner-operator of Eton Square Cinema.

He’s excited and anxious about reopening to the public. He’s never been forced to go dark at his theater for three months, but then a pandemic happened.

He’s been an independent operator for a couple of decades at locations that also included Eastland Mall and Super Saver Cinema.

This is a business he runs with his family as Tulsa’s only indoor cinema showing first-run Hollywood movies at discount prices.

The phone rings again. It’s another customer asking, “Are you open?”

Eton Square Cinema is a movie theater where someone answers the phone when you call.

“We are locally owned, and we don’t have the big money that other (theaters) have. We make a go of it as a local business, and that’s not always easy to do” under any circumstances, Mendenhall said.

That’s especially true now. He said this while planning to hire a crew to “deep clean” the entire theater so that people feel safe.

While knowing that he can only sell somewhere between 25% and 50% of his seating capacity.

And while pondering whether that will even be a concern, considering no studios are releasing any summer-movie blockbusters until at least late July.

“Right now is when we should be making most of our money with school out, and that’s not happening, and it hurts,” said Mendenhall, who has had his banker, his landlord and his vendors all to consider during this time.

“There have been some negotiations that have been hard to have,” Mendenhall said of these obligations.

He should have had full houses for weeks now on Friday and Saturday nights, with a new Marvel movie and the latest “Fast and the Furious” sequel among those that were on the schedule in May.

But the coronavirus moved in, and those movies moved out to dates in the future as theaters closed.

“I look at places like bars and movie theaters as being among some that got hit hardest by this thing. It’s not like we could change to doing curbside service,” Mendenhall said.

“I had somebody tell me I should just show the movies on the side of the building. Really? Come on.”

Part of reopening Eton Square Cinema means following safety and health guidelines like social distancing, and that one comes naturally for the theater.

One of Eton Square’s most unique fixtures has been those rectangular tables that sit in front of the seats, where guests place their purses (no need to put them on the floor), their popcorn and drinks.

It’s a feature that guests appreciate — maybe now more than ever.

He’s always said the extra room that the tables provide between the rows means “you don’t have people breathing down your neck,” and that’s a good thing.

“When we put the tables in the auditoriums, and seats were taken out (to make room for the tables), we had capacity go from like 373 to 180” in the largest auditoriums, Mendenhall said. “So we’ve got the social distancing with that spacing.”

He said there will be fewer showtimes upon reopening and more time in between shows for cleaning, meaning possible 1 p.m., 4 p.m. and 7 p.m. showtimes to start, with “maybe a later one on the weekend,” as an example.

“We’ve done some rearranging in our lobby area so people won’t be standing so close to each other, and we’ve spread out our concession stand, and then with the deep cleaning of the auditoriums, I hope it makes people want to come back,” he said.

His employees will wear masks, he said, while customers are encouraged to wear them.

Early this week, he was still figuring out what movies would be playing Friday — see etonsquare6cinema.com for details — but his discount prices remain the same.

He renovated the theater two years ago and didn’t raise ticket prices, as other theaters do immediately. Now, despite being closed for three months, and despite vendors passing along price increases to him, he’s not going to charge more.

The world has changed, but the price-point hasn’t: Eton offers the lowest price in Tulsa to see the newest movies, in addition to discounted concessions.

“I hope that’s the one advantage I do have” over competitors, Mendenhall said, adding that his usual $4.50 matinee price will be the charge for evening shows as well for the initial reopening, which this week includes some family films and retro showings like “Smokey and the Bandit” and “Dirty Dancing.”

“I know people need a break. And I hope they need movies, which have always served as an escape from reality. Lord knows we need that right now.”

“They’ve said, ‘We miss you guys,’ and we really appreciate hearing that. It means something,” he said.

But there’s no getting around the fact: The experience will feel different for a while.

“A lot of people are anxious and ready to get out of the house. We went to a local pub last week that just reopened, and we met friends and visited. And it just felt like it was all new again, just being able to do that,” Mendenhall said.

For now, some people are still looking forward to some form of a summer movie season, like watching a good movie on a hot day in a cool theater, with some popcorn and a cold drink.

Mendenhall is looking forward too but a bit further forward.

“I’m not real sure what I’m looking forward to other than next year and getting all of this behind us,” he said.