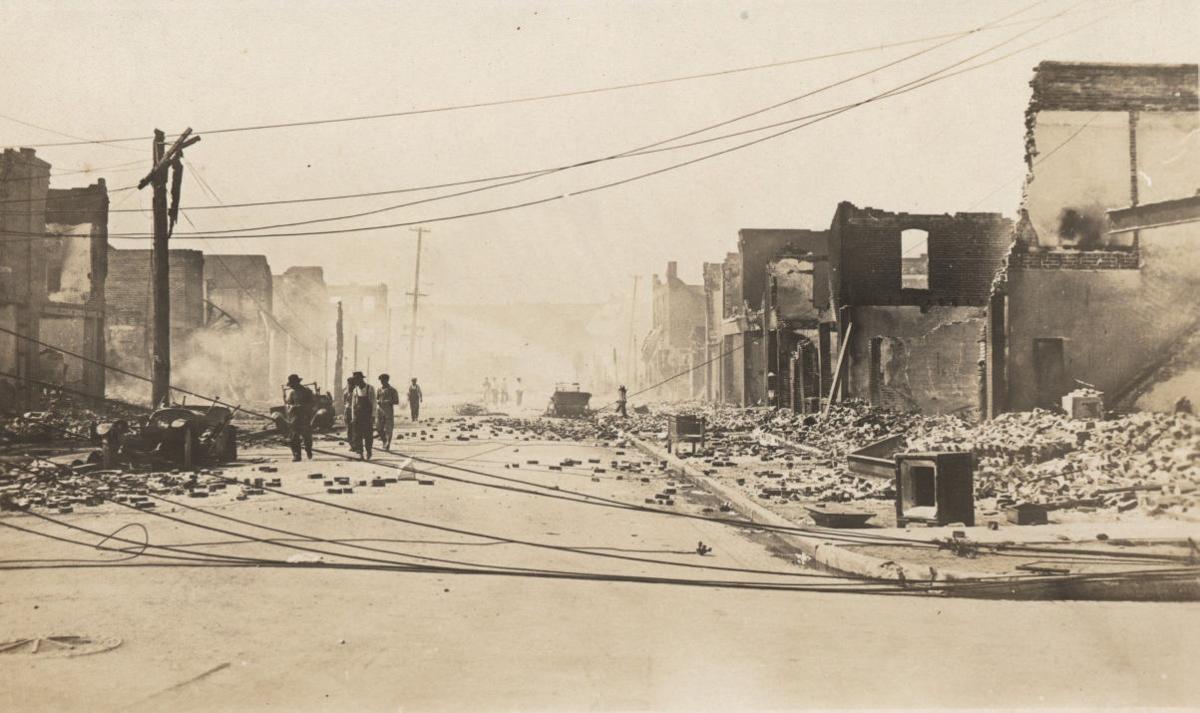 A view of Greenwood Avenue looking north from Archer Street shows the devastation in the aftermath of the Tulsa Race Massacre of 1921.

LeBron James and his SpringHill Entertainment production company announced this week, on the 99th anniversary of the Tulsa Race Massacre, that it plans to make a documentary about the Greenwood District tragedy of 1921. 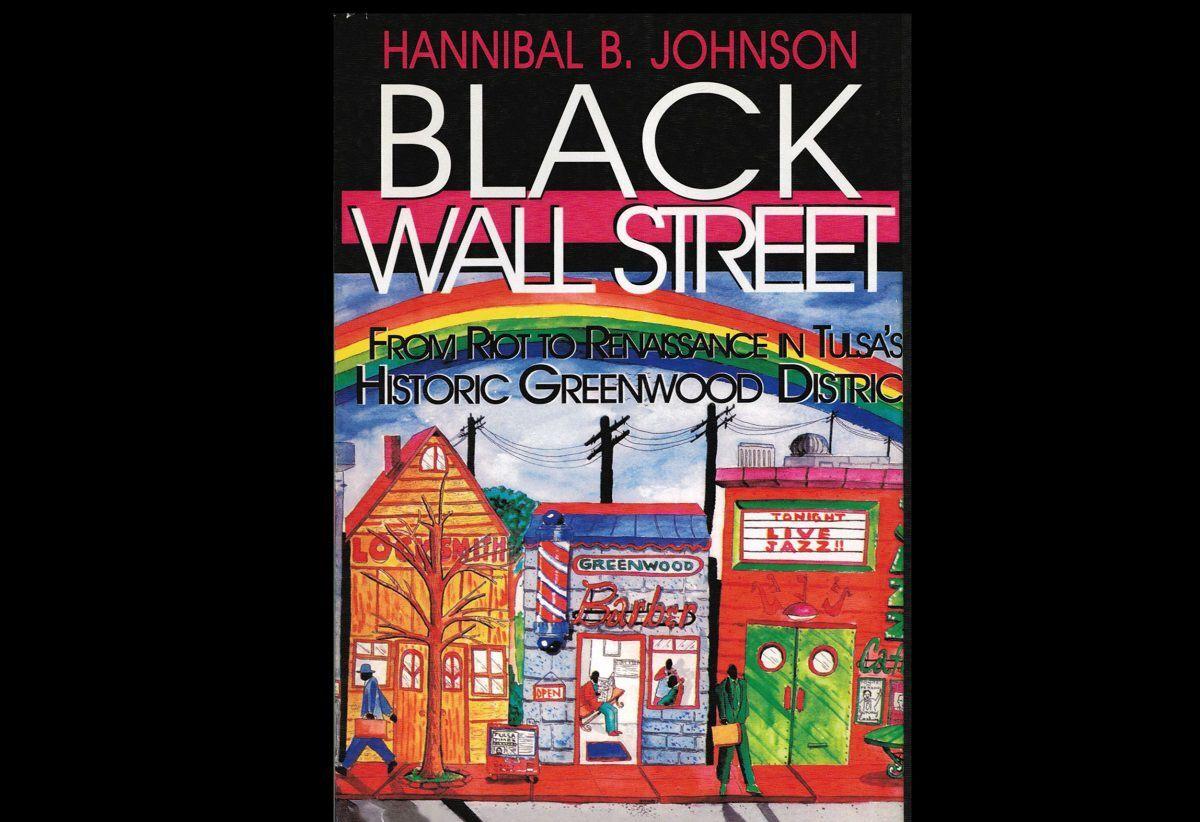 Tulsa historian Hannibal Johnson, author of “Black Wall Street: From Riot to Renaissance in Tulsa’s Historic Greenwood District,” is one of the foremost authorities on the 1921 Tulsa Race Massacre, and he is releasing a new book, “Black Wall Street 100,” this summer. Click here to read more. 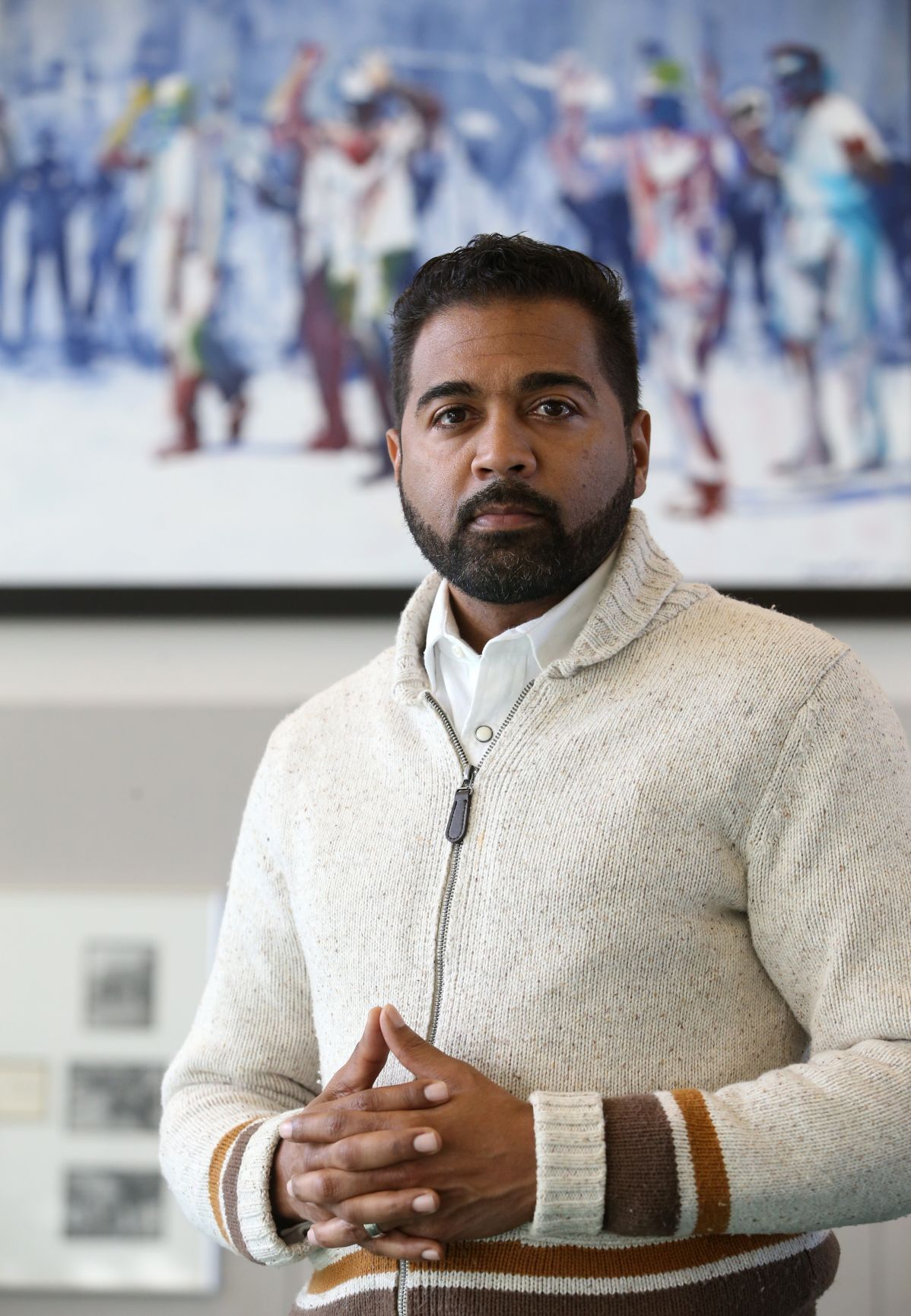 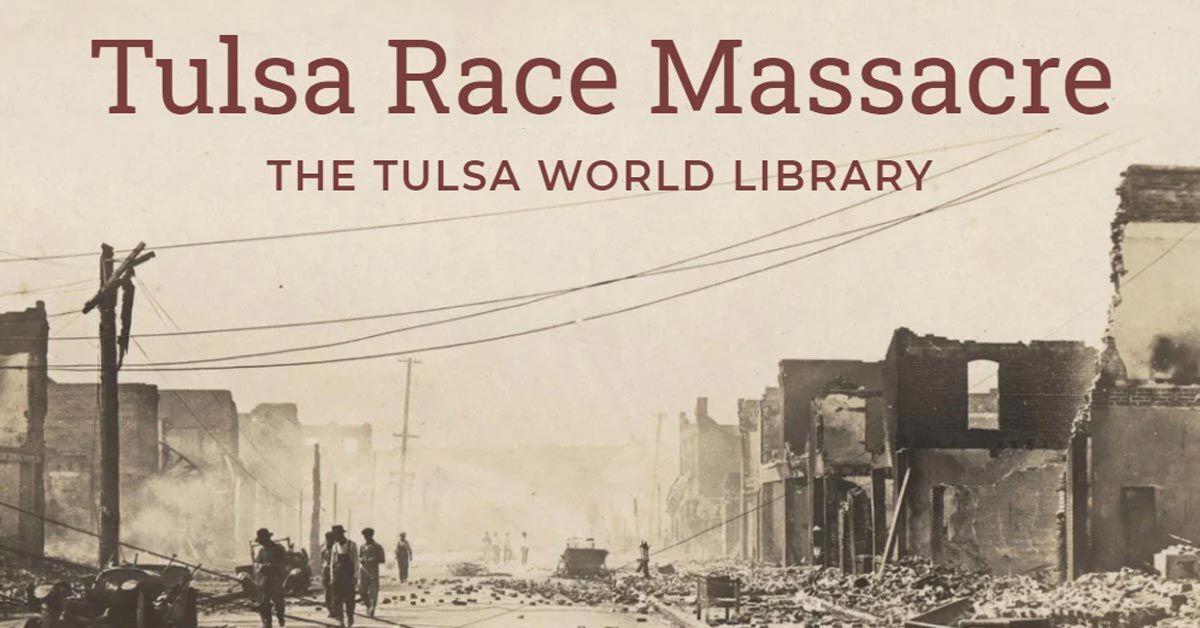 See all of the coverage of the race massacre in this special report.

A view of Greenwood Avenue looking north from Archer Street shows the devastation in the aftermath of the Tulsa Race Massacre of 1921.

LeBron James and his SpringHill Entertainment production company announced this week, on the 99th anniversary of the Tulsa Race Massacre, that it plans to make a documentary about the Greenwood District tragedy of 1921.

Tulsa historian Hannibal Johnson, author of “Black Wall Street: From Riot to Renaissance in Tulsa’s Historic Greenwood District,” is one of the foremost authorities on the 1921 Tulsa Race Massacre, and he is releasing a new book, “Black Wall Street 100,” this summer. Click here to read more.

See all of the coverage of the race massacre in this special report.

The Tulsa Race Massacre of 1921 is a story that most Oklahomans have only been learning about and talking about in recent decades.

That story — the Greenwood District destroyed and at a minimum dozens killed, hundreds injured and thousands left homeless — will be going worldwide in the next year like never before.

Popular culture will be shining a light on the tragic events of May 31-June 1, 1921, as happened with the HBO drama series “Watchmen” last year, which featured a fiery re-enactment of the massacre’s killings and destruction in Tulsa’s black community that stunned viewers nationwide.

Viewers who, in many cases, assumed the story was a fictional event.

The makers of two high-profile documentaries based on the Greenwood tragedy — one from a maker of 2019’s “Surviving R. Kelly” docuseries and the other from LeBron James’ production company — chose this week, on the 99th anniversary of the massacre, to announce their separate projects.

Those announcements also come at a time of nationwide protests following the death of a black man, George Floyd, while in police custody in Minnesota.

The story of the Tulsa Race Massacre “speaks to how vital and how important this all is and to the triumph of the human spirit,” said Phil Armstrong, the manager of a project to build a museum, the Greenwood Rising History Center, ahead of the centennial.

“With everything going on in the country, when our country needs healing, what better way to do that than to look at this almost 100-year-old tragedy and wonder how we are dealing with things now,” Armstrong said.

Meanwhile, a pair of planned projects about the massacre and Black Wall Street announced in past years — one from Oprah Winfrey’s OWN network and another from filmmaker Tim Story — do not appear to be moving forward, though there is still time for these ideas to be revived.

But creative interest in the Tulsa Race Massacre is only going to pick up, it appears, as one community leader told of being contacted this week about a project involving musician John Legend, and another may be fielding offers for his writings on the massacre.

“These people want to make a feature film” drama based on his book, said Hannibal Johnson, an attorney and historian who has engaged in extensive research of the tragedy and written multiple books on the subject.

“I just spoke with them, and they asked if an option on the book was available. They sent me a note yesterday saying (broadcaster) Al Roker was interested in the project,” said Johnson, whose books include “Black Wall Street: From Riot to Renaissance in Tulsa’s Historic Greenwood District.”

Johnson said he and others are receiving increasing inquiries about the massacre from people in the creative community.

While acknowledging that many projects “don’t get off the ground,” he has one sure thing that is being released: his “Black Wall Street 100” book that’s coming out this summer.

Looking at “What is different about Tulsa 100 years later?” and serving as “almost a compendium of how we have worked to address our racial history,” the book was planned for an earlier release before the pandemic struck, Johnson said.

“But as a resource, to tie in with some of the things happening right now, the timing is perfect.”

“Black Wall Street” is the working title for a documentary that will be produced and directed by Dream Hampton, an executive producer on “Surviving R. Kelly,” the documentary series that following its release saw music star Kelly behind bars for sexual abuses of young women.

Hampton said of her project in a news release: “Black people from Tulsa have refused to let the Greenwood District massacre be erased from history. I’m so inspired by their persistence to lift up the stories of what north Tulsa was before the massacre.”

In the same release, the U.K. company behind the production said the “series will examine Tulsa Mayor G.T. Bynum’s controversial attempts to locate the mass graves” of some victims of the massacre, in addition to the history of Greenwood.

Known for her pursuit of social justice through her works, Hampton was named one of Time magazine’s most influential people of 2019, with an entry that was written by Tarana Burke, one of the women who founded the #MeToo movement.

No distributor or date of release for the “Black Wall Street” docuseries, which has yet to be made, has been announced.

Meanwhile, also announced on Monday by SpringHill Entertainment — a production company owned by NBA star LeBron James and his creative partner, Maverick Carter — was the news that it is working on a Tulsa Race Massacre project.

According to her Twitter account, filmmaker Salima Koroma spoke of her pitching the project to the company, while also referring to incidents of the past week, including the death of George Floyd.

She tweeted: “The Tulsa Race Massacre is not just a black story but American history. The fabric of this country is soaked in racism and today 99 years later, we’re still fighting for change. That’s why I’m partnering with @SpringHillEnt to tell the story of Black Wall Street.”

Saying how this project had been developed in recent weeks, SpringHill retweeted Koroma’s post and added, “We knew we had to empower her to tell that story” followed by James tweeting on his account “ABSOLUTELY EMPOWER (Salima).”

There is also no release date or outlet connected to this documentary, but both projects would be expected to be made public closer to the 100th anniversary of the Tulsa Race Massacre.

A pair of equally high-profile film projects inspired by the 1921 tragedy in Tulsa and announced in the past would appear to be doubtful, as community leaders said they had not heard of any progress.

This includes a four-hour miniseries for the Oprah Winfrey Network that was supposed to begin filming in the fall of 2015, with Oscar-winning actress Octavia Spencer (“The Help,” “Hidden Figures”) to star.

The story was to be about fictional characters in the historical setting of the two-day riot, with Spencer playing a young woman working as a newspaper reporter in Chicago who returns to Tulsa for a high school graduation. The character’s father owns a thriving grocery business in the Greenwood district.

“I’d have to say that’s on hold because it’s not actively in process,” said Johnson, the “Black Wall Street” author, while Greenwood Rising manager Armstrong said of the OWN project, “There has been no traction on that that I’m aware of, no indication that they are going to pick that back up.”

In addition to the OWN project, it was reported in 2017 that veteran filmmaker Tim Story, who has directed the “Ride Along” films and the “Think Like a Man” movies, was planning to produce a race massacre project.

According to a story in the industry trade publication Deadline, Story’s production company wanted to develop a film based on a 2014 book, “Holocaust in the Homeland: Black Wall Street’s Last Days.”

Multiple community leaders said they had never heard of any plans for Story’s project, including former state Sen. Judy Eason McIntyre, who has served on the Tulsa Race Massacre Centennial Commission.

She added that on the proposed Oprah Winfrey Network project, “I haven’t heard anything, and I met with some of the people (involved years ago).”

But she agreed with others who said they have heard about multiple people planning massacre-related projects, whether that be film, TV, books or beyond, for 2021.

“I can tell you that there are people here and outside of Oklahoma working on things, and that’s good to hear,” Eason McIntyre said, speaking to the upcoming centennial of the race massacre, as well as how it ties in to current protests.

“Through all of this turmoil, despite all of that, there is a ray of sunshine in that we have police chiefs who are listening and white people who are caring, saying it’s real and not just people complaining. That is big.”

And it will all be part of the history to be told on the centennial of the Tulsa Race Massacre in 2021.

Tulsa Race Massacre: This is what happened in Tulsa in 1921

Tulsa Race Massacre: Photos from then and now