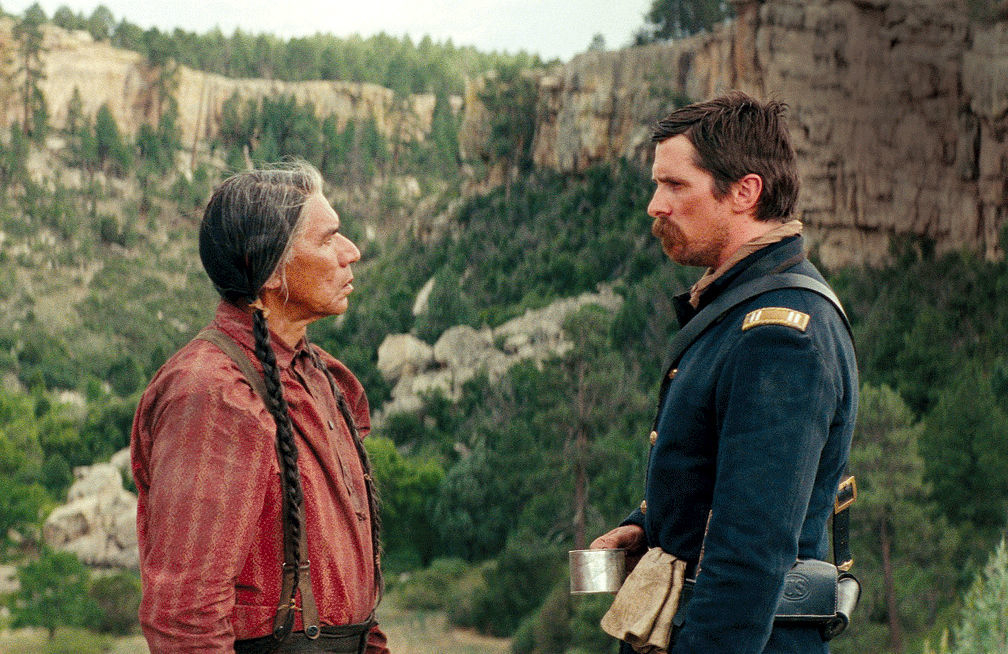 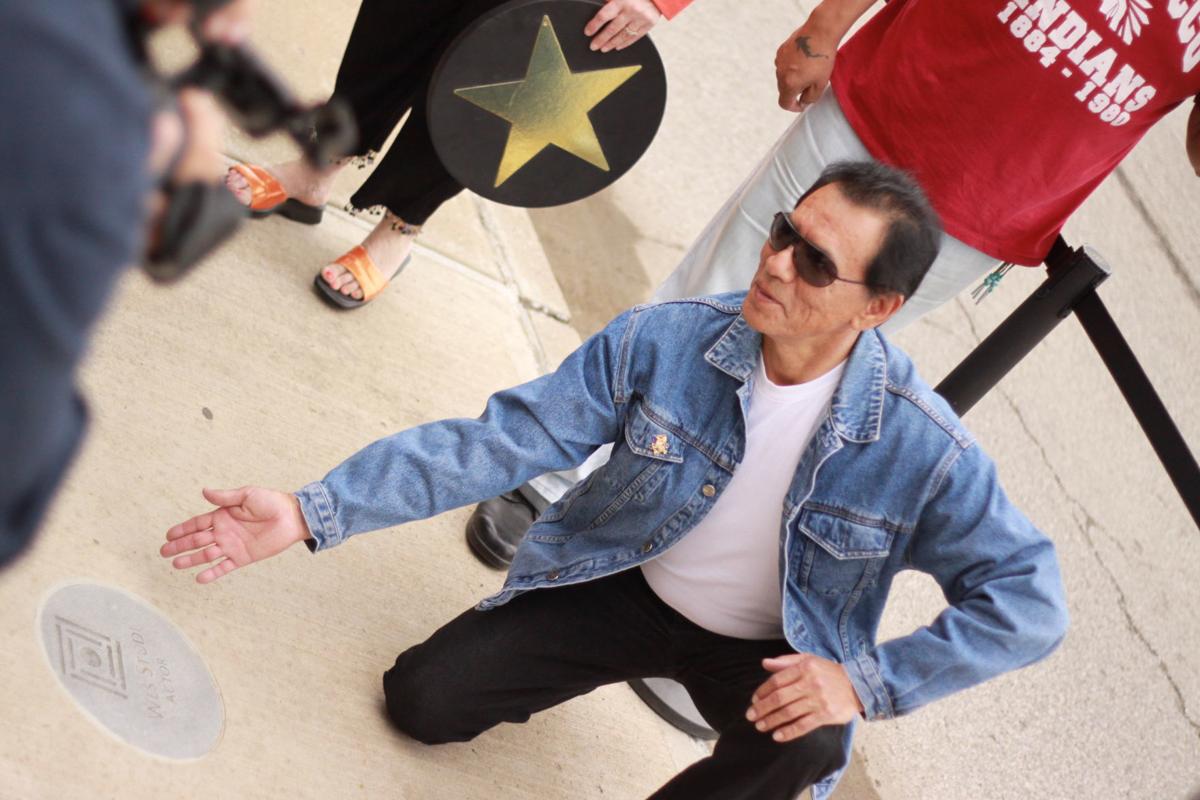 Oklahoma actor Wes Studi poses with his medallion on the Oklahoma Walk of Fame on the sidewalk outside Circle Cinema. CHUCK FOXEN/Circle Cinema 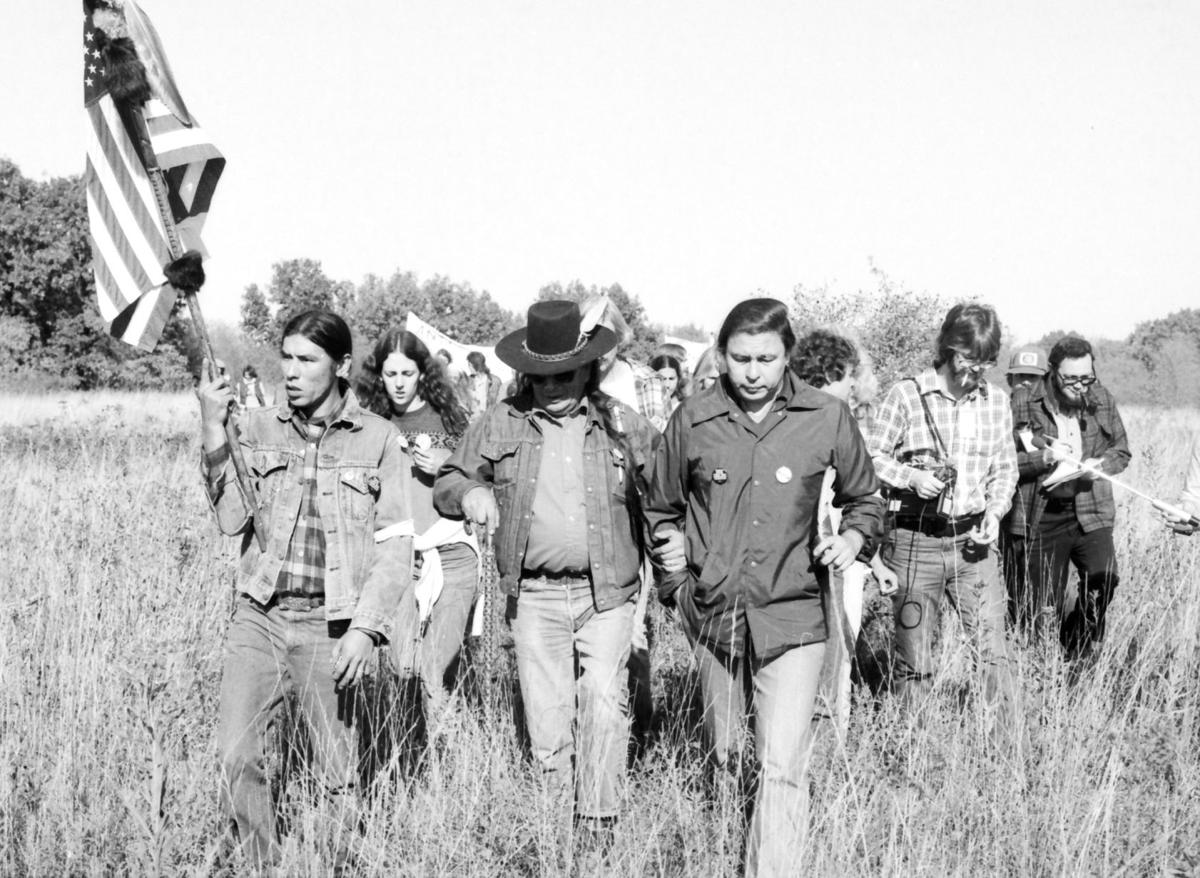 Actor Wes Studi carries an American flag as he helps lead nearly 400 protesters and journalists on a march to the Black Fox nuclear power station construction site on Oct. 7, 1978, when many of them were arrested for trespassing. Tulsa World file 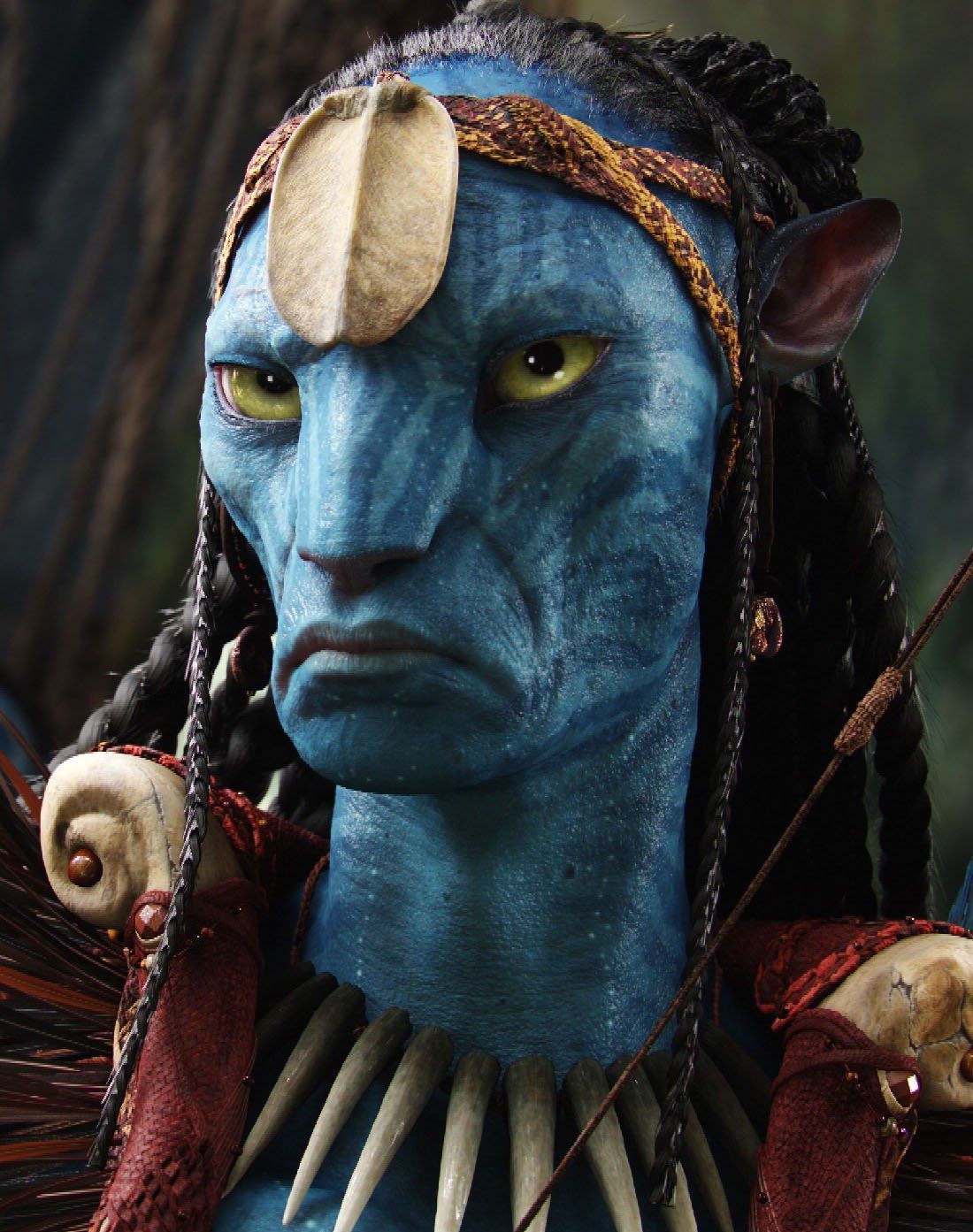 Speaking only Cherokee until the age of 5. Serving in the infantry in Vietnam. Becoming a Native American activist whose actions had his government watching him. Deciding to become an actor in his 30s.

This is not the average resume for an Academy Award-winning performer.

But Wes Studi is not your average Oscar recipient: On Sunday, for his career’s work, the Cherokee from Cherokee County became the first Native American actor to receive an Academy Award.

“Being recognized by your peers....well, every actor would like to have an Oscar,” Studi said in a phone interview from his Santa Fe home prior to the ceremony.

“It’s a recognition that your work hasn’t gone unnoticed, and it’s really an overwhelming honor to receive for a body of work.”

That body of work includes roles in Academy Award-winning films like “Dances With Wolves” and “Avatar,” as well as audience hits like “Heat,” the starring role in “Geronimo: An American Legend” and his performance as a dying Indian chief in 2017’s “Hostiles” opposite Christian Bale.

The actor is “....known for portraying strong Native American characters with poignancy and authenticity,” the Academy said in announcing his award.

Studi is a craftsman when it comes to creating a character. He deflects compliments on his acting to colleagues who make him look good, from co-stars to makeup people.

So what will he say at the podium when he’s handed an Academy Award?

About time, he believes, that Native Americans are recognized in such a way.

‘Didn’t match up with my reality’

Born in 1947, Studi grew up seeing 1950s Western movies and TV shows filled with cowboys and Indians — both of whom were portrayed by white actors.

“It’s always seemed wrong to me, and it didn’t match up with my reality,” Studi said, “but to alleviate any malicious activity on the part of Hollywood casting choices, there was a time when there weren’t that many Native American actors to fulfill those parts.

“But filmmakers began to work on the authenticity,” he said, noting popular actors of later years including Jay Silverheels, Dan George and Will Sampson, the “One Flew Over the Cuckoo’s Nest” actor from Okmulgee County.

Not that this stopped 1960s portrayals such as Brooklyn native Chuck Connors as Apache chief Geronimo — a character eventually portrayed in 1993’s “Geronimo: An American Legend” by Studi.

A look at that film’s poster shows that it stars Gene Hackman, Robert Duvall, Jason Patric and then Studi. In the title role.

“It is a business, and I believe I was a long shot in being cast, largely unknown when I came in to audition,” said Studi, who then puts another focus on the search for authenticity.

“The epitome would have been to have a real Apache to play Geronimo. But at least they decided to think of it with more authenticity. It was better. It was all part of a beginning.”

‘A huge rush of fear’

Studi made a mark with the Academy while introducing a video tribute to military films at the 2018 Academy Awards, where he made the initial introduction and then also spoke in Cherokee and thanked Native Americans who had served.

Studi served for one year in the infantry in the Vietnam delta areas, and he admits to discovering a similar “rush” in his initial theater acting experiences to that of his service.

Acting in front of a live audience was “a huge rush of fear that I had to overcome ... a fear of failure. I can compare it to a combat situation, where you’ve had that training, but still it’s different than when you are in the middle of it,” Studi said.

“It’s a risk that you take, and like combat, you’re hoping that everyone does the job that they are supposed to do, and that it works. (Acting) raises the adrenaline level to a great euphoria almost. It can be a wonderful feeling.”

Studi’s post-war activism, still long before any acting, included joining the 1972 Trail of Broken Treaties march on Washington, D.C., and occupying the Department of the Interior building, as well as the American Indian Movement’s 1973 takeover of Wounded Knee in South Dakota.

These actions, and others in Oklahoma (like protest marches to the proposed Black Fox nuclear power plant construction site) that Studi took part in, have become important parts of the actor’s past, the Academy said when announcing his award.

At the time, they became important reasons for putting Studi under surveillance.

“Those things got me on the FBI’s list for a while,” he said.

“I came back to Oklahoma and I had a house in Tulsa after Wounded Knee, and I could walk outside in the morning and see this car parked outside. After a while I’d wave at the guys. They were keeping an eye on me, and on others who were arrested at Wounded Knee.”

Studi is still known for his Native American activism, for speaking his mind on issues, and for his work that shines a light on the past, such as in “Hostiles,” where his dying Indian chief and Bale’s soldier reach a peace that goes beyond their years of battles.

But the actor has mellowed when compared to how he channeled emotions into his earliest film roles, such as “Toughest Pawnee” in the Oscar-winning smash “Dances With Wolves,” playing a character without a name and turning him into one of the movie’s most unforgettably vicious memories.

Or in his acclaimed performance as the murderous Magua in “The Last of the Mohicans,” as a Huron Indian who blames a British colonel for his family’s deaths and who lives for revenge.

Studi’s Cherokee heritage, and his activism, played a part in his craft.

“When I began my career, I could easily be seen as the angry Indian because I was the angry Indian,” he said. “I had first-hand knowledge of how (government officials) see us, and it’s not that far removed from some of the characters that I played in films.

“I used that, and it has paid off. Any Indian who has had dealings with our government in previous years, and who knows how we hold the government to their word about what has been taken from us, they know.”

Studi’s road to Hollywood began on a Tulsa Performing Arts Center stage, in one of the most celebrated productions of the American Indian Theater Company.

“Black Elk Speaks” starred Okmulgee County native Will Sampson, David Carradine (a non-Indian) and, in what he describes as “my first paying gig,” Studi said.

“That was playing with a couple of guys who had hit the big-time,” he said. “You’re a bit nervous, and you don’t know if they notice you, or even know that you’re alive. But what a thrill to have your name up there with theirs.”

From there he went on to film with public television, and not long after he began to entertain the idea of giving Hollywood a shot. When “Dances With Wolves” opened in late 1990, Studi was already 42.

But it was with that Oscar-winning best picture that he saw a small breakthrough in the way that Native Americans are treated on film, Studi said, by going beyond a usual one-dimensional view of Indians.

“It’s a study of these people. You see them like you see other characters. You like them or dislike them for their own personalities. And they do have personalities, more developed than you’ve seen in previous films.”

Three decades later, he thinks of continuing progress, both in films and popular entertainment as well as the Academy, considering his honor.

The Academy has “made some progress since #OscarsSoWhite. They’ve made an effort and looked at it, and decided on a better approach,” Studi said, “and it’s one that recognizes the diversity of our country and its population.”

His advice to Native American actors today is largely positive encouragement, but with a warning, too.

Studi can only tell them what he knows.

“I caution them that they may have to make sacrifices. That’s it’s not always a welcoming environment, and there’s plenty of competition. And that you better have a tough hide, no matter how talented you are,” he said. He spoke of Native American filmmakers, including Tulsa’s Sterlin Harjo, with an encouragement that will be even more contemporary films made that reflect the Indian experience, as opposed to largely Westerns and historical movies of the past.

“We need you in this business, and we need more of you as time goes on, and to work toward showing how we are seen in society today,” Studi said of Native writers and directors.

“Quite simply, (showing) that we still exist. The world needs to know that.”

Studi takes great pride in becoming the first Native American actor to receive an Oscar for his acting. But he notes that it comes for a body of work, and winning an Oscar for a performance remains elusive.

“If it can’t be me, then I hope this can inspire another Native American to chase that dream because it helps all of us,” he said.

(AP) — While toasting Wes Studi on Sunday, his "The New World" and "Hostiles" co-star Christian Bale noted native and indigenous people have been underrepresented on both sides of the camera but "we're in a room full of people who can change that."

Leonardo DiCaprio stood twice to applaud Studi, taking out his phone to film the actor proudly holding his Oscar.

There have been only a handful of indigenous people nominated for Oscars. In 1982, Cree musician Buffy Sainte-Marie, who was born in Canada, won an Oscar for co-writing the music to best song winner "Up Where We Belong."

Q'orianka Kilcher, who acted with Studi in "The New World," said he "revolutionized how indigenous peoples are portrayed in cinema, showing us all what is possible."

Wes Studi in 'A Million Ways to Die in the West'