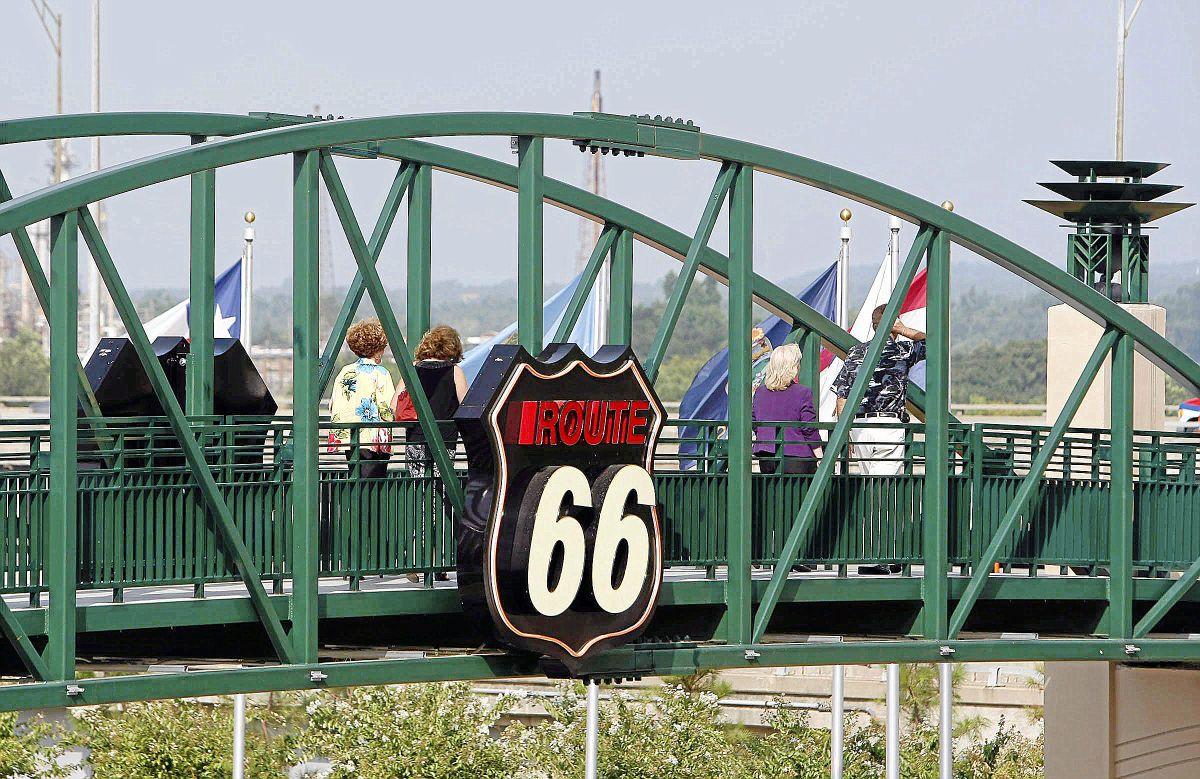 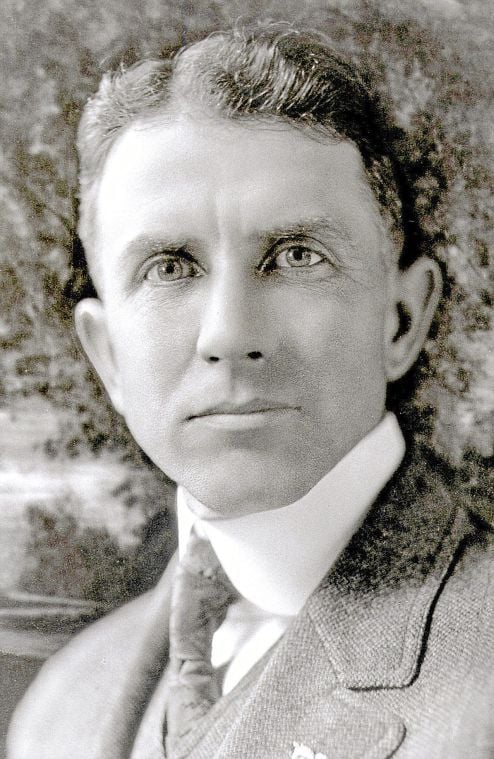 Cyrus Avery, a Tulsa businessman and Tulsa County commissioner from 1913 to 1916, became known as the Father of Route 66. He was selected to create a U.S. highway system and made sure that Route 66 passed through his hometown of Tulsa. 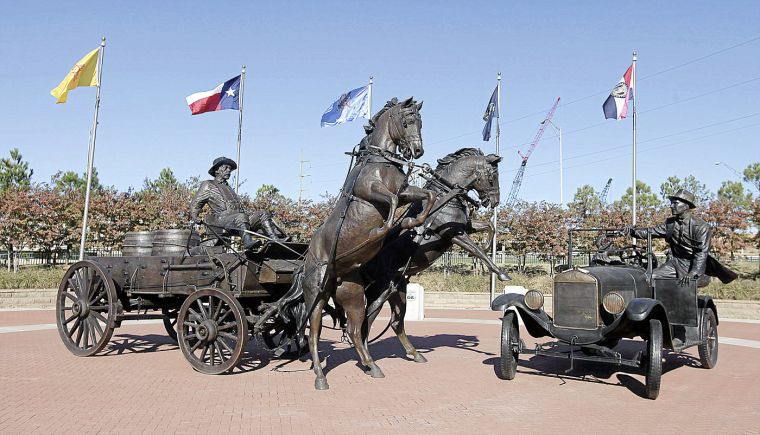 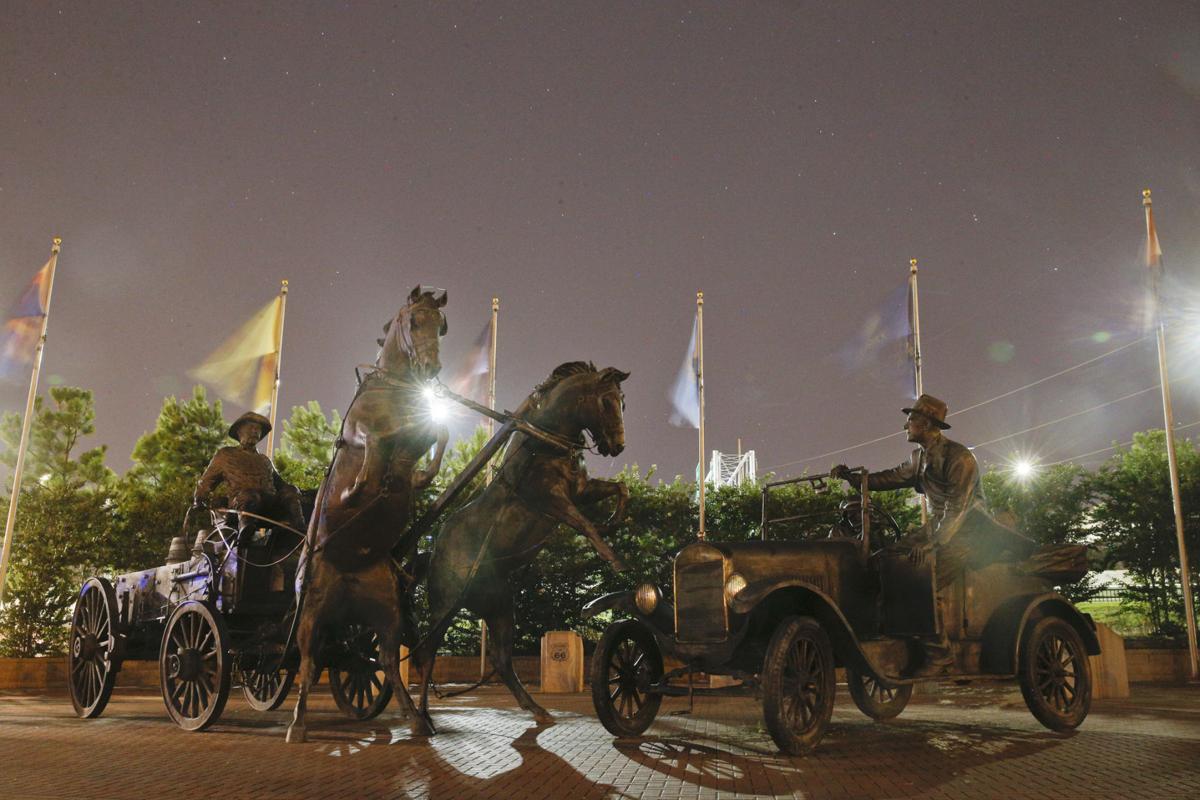 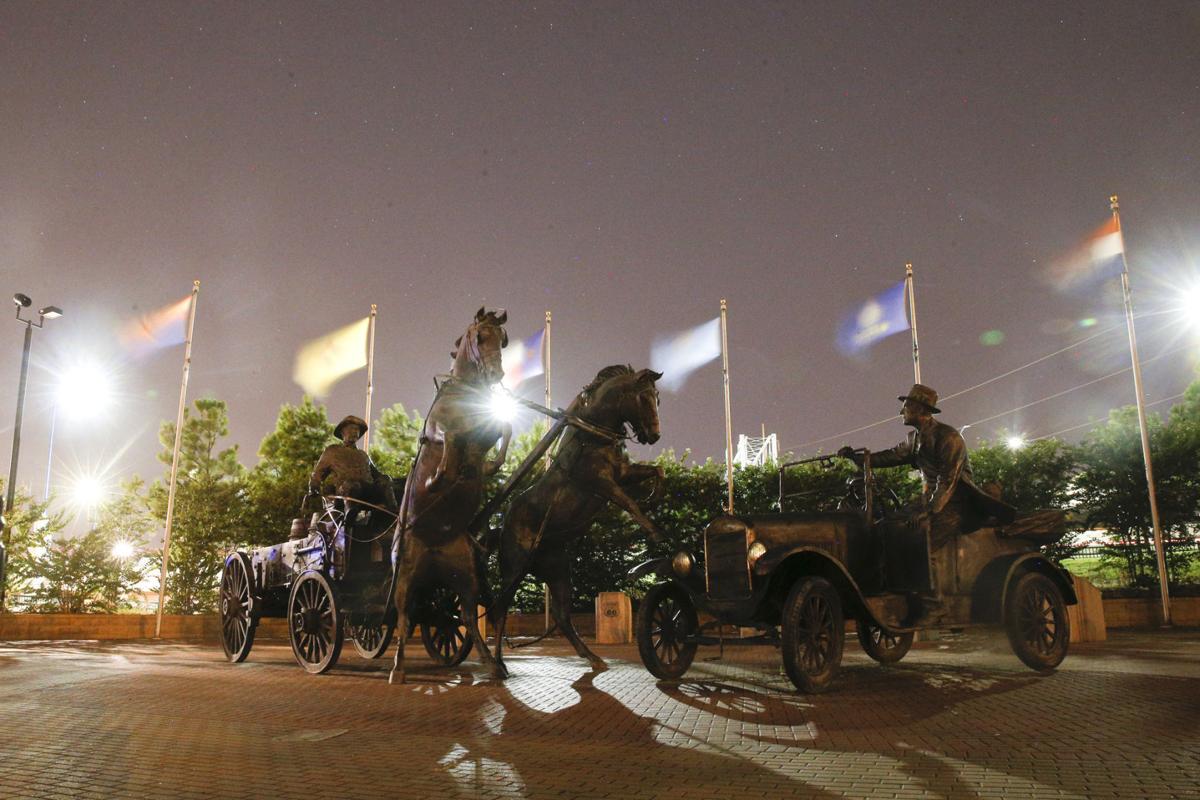 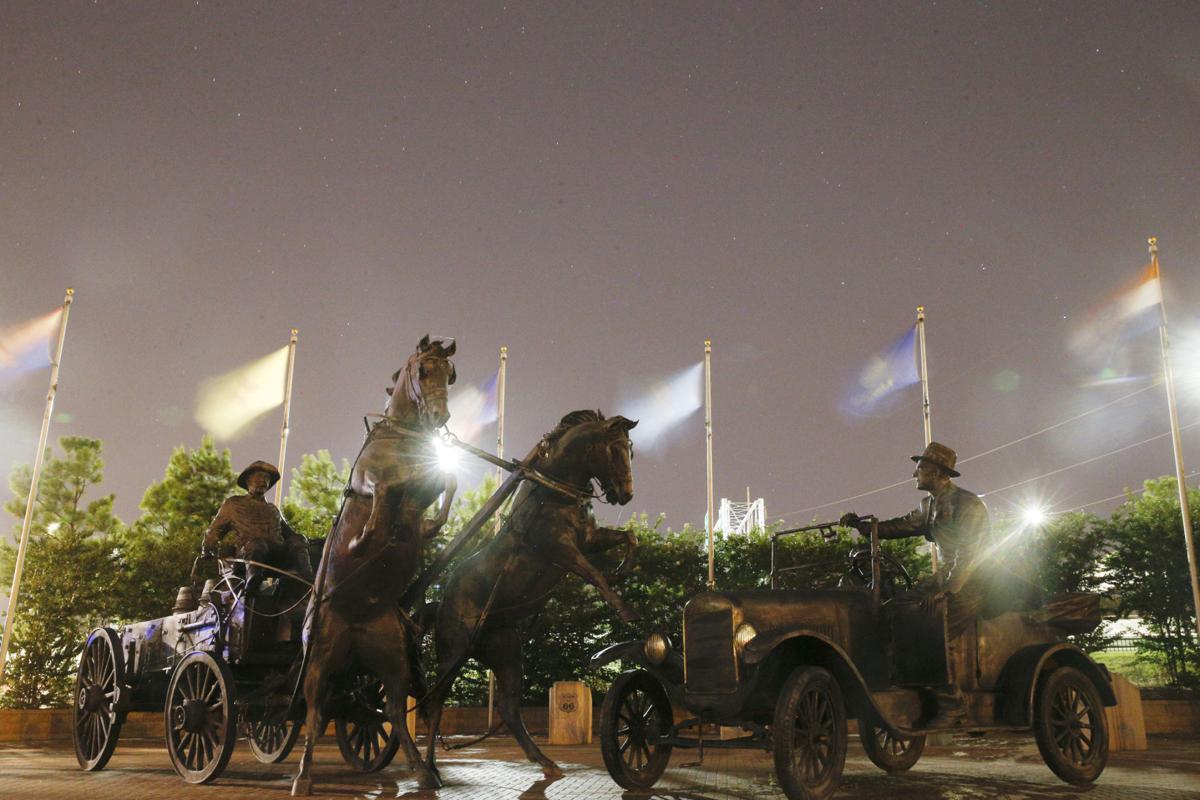 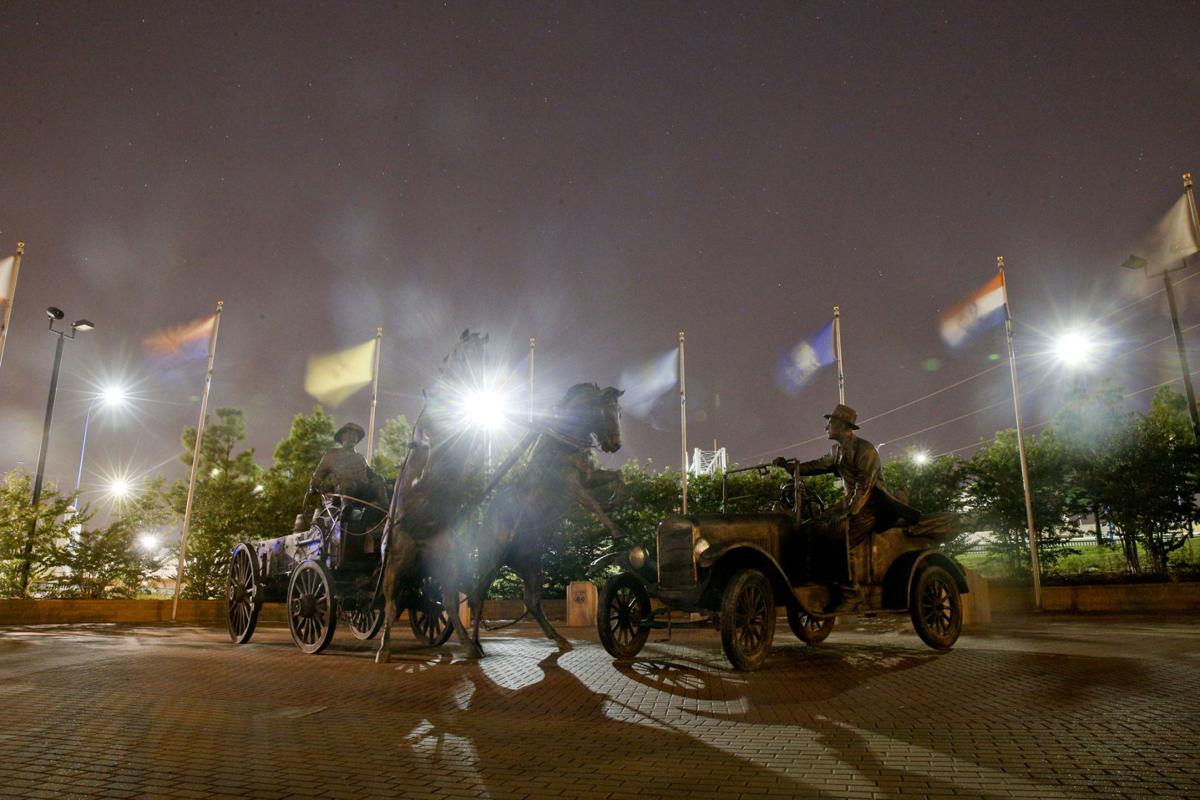 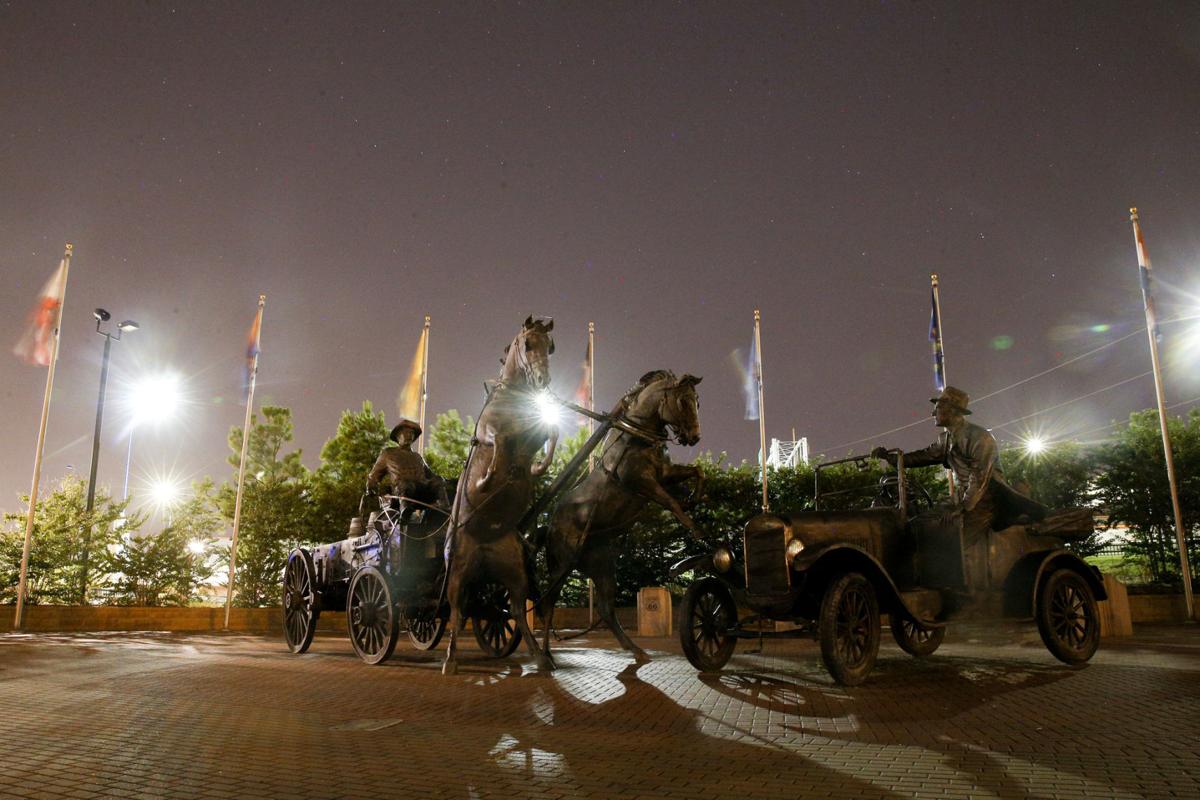 A statue of Cyrus Avery sits on Historic 66. IAN MAULE 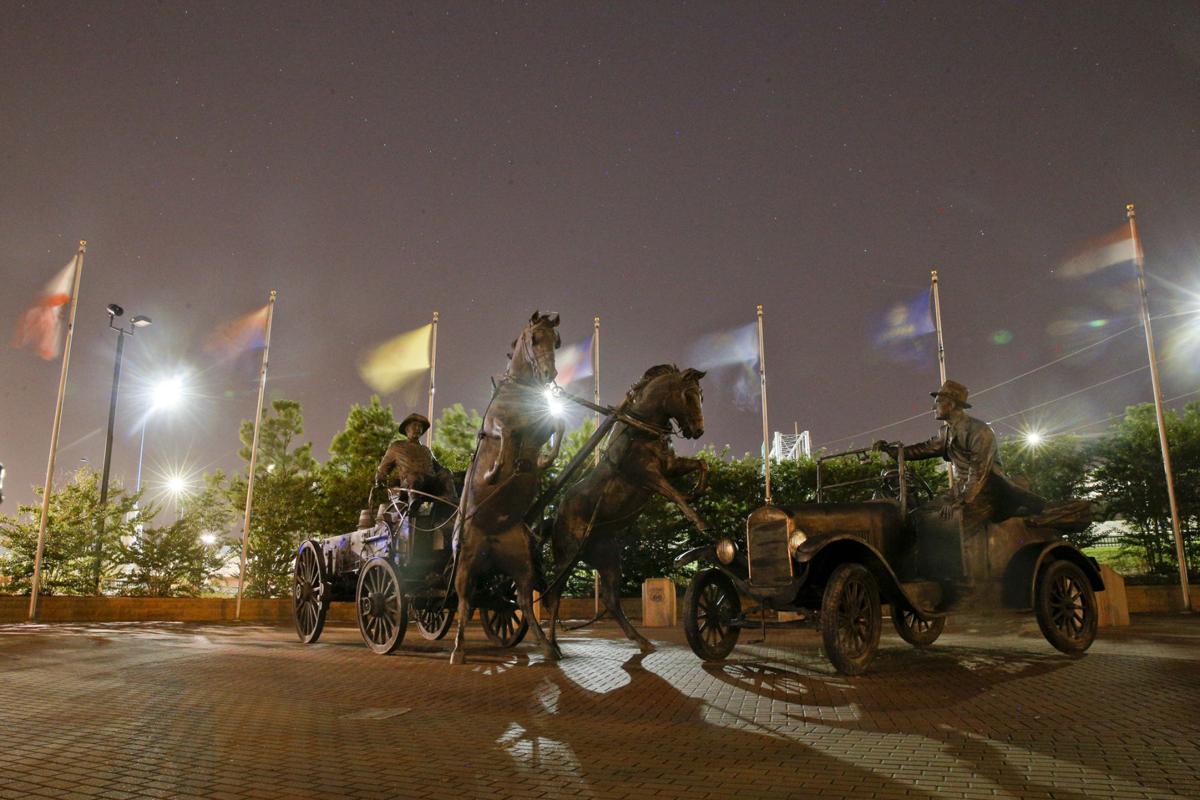 Cyrus Avery, a Tulsa businessman and Tulsa County commissioner from 1913 to 1916, became known as the Father of Route 66. He was selected to create a U.S. highway system and made sure that Route 66 passed through his hometown of Tulsa.

A statue of Cyrus Avery sits on Historic 66. IAN MAULE

That much is accepted as fact by those steeped in the history and traditions of the iconic roadway. Oh, there may have been A Route 66. But it wouldn’t have been THE Route 66.

It was Avery, as a member of the commission that created the first national highway system, who insisted the main route from Chicago to Los Angeles pass through Tulsa and Oklahoma City, who muscled the slogan “Main Street of America” away from other contenders and who finally blessed the designation U.S. 66 — which in the end proved much more mellifluous and memorable than the original U.S. 60.

Less known is the extent to which Avery influenced Tulsa to this very day, from the water we drink and the roads on which we drive to the way we think about our city. The allure of the road he created, of the era it symbolized, still point to the future.

And that, too, is Cy Avery’s legacy.

Avery held elected office only briefly — four years as county commissioner before World War I — and never accumulated great wealth. But for a few critical decades in the early 20th century, he seemed to be everywhere and into everything.

Not only did Avery see to it that U.S. 66 went through Tulsa, but also U.S. 75 and U.S. 64. He recruited Tulsa’s first international convention — the 1914 Dry Farming Congress — to town and recommended the water source Tulsa relies on to this day.

Avery was a real estate developer, a farmer, a rancher, an oil and gas trader and a businessman. Avery’s Corner, where a traffic circle now swirls in far east Tulsa, was an early version of the truck stop, with a gas station, inn and tourist cabins. Many and probably most of northeastern Oklahoma’s Depression era Works Progress Administration projects were built under his direction.

Avery’s overriding trait was his curiosity. He dabbled in all sorts of businesses, wrote treatises on agronomy, understood the latest techniques and materials for road-building, and recognized sooner and better than most that Tulsa would have to look far beyond its immediate surroundings for water of sufficient quantity and quality to meet future demand.

Born in 1871 in northeast Pennsylvania, Cyrus Stevens Avery came to Indian Territory at age 12 in a covered wagon with his father, Alexander James “A.J.” Avery. Father and son settled on a small farm and built a house near Spavinaw Creek, on the foundation of a burned cabin that had belonged to Cherokee leader Stand Watie. After two years, they sent for the rest of the Avery family back in Pennsylvania.

In his late teens, Cyrus earned a teaching certificate and later attended William Jewell College in Liberty, Missouri, where he earned a liberal arts degree and met his wife, Essie. They moved to Oklahoma City in 1898, then Vinita, and, finally, Tulsa in 1907. Avery bought a farm in the vicinity of present-day Admiral Drive and Mingo Road, and engaged in real estate and trading in oil and gas leases.

Avery also developed several Tulsa subdivisions, including Morningside, in what is now the Maple Ridge Historic District, and at least one of the many small additions to sprout along North Greenwood Avenue as it acquired its reputation as the Black Wall Street of America. In the days and weeks after Tulsa’s 1921 race riot, Avery was one of the people trusted by all sides and helped ease tensions not only between blacks and whites but also between business factions at odds over who was to blame for the disaster and how to proceed going forward.

Avery is best known for Route 66 but may have been proudest of his role in the Spavinaw water project.

“I think he would say that bringing Spavinaw water to Tulsa was his single-greatest achievement,” said granddaughter Joy Avery.

Although situated along the Arkansas River, early Tulsa suffered from a severe shortage of potable water. Silty and heavy with salt, the local river water was virtually undrinkable. It clogged plumbing and ruined boilers and radiators. By 1919, Tulsans were consuming 50,000 five-gallon bottles of water a week.

As early as 1911, and perhaps before that, Avery had advocated piping water from his old haunts on Spavinaw Creek. The notion seemed fanciful, at least at first, and millionaire industrialist and oilman Charles Page claimed he could provide sufficient water for much less cost from his reservoir on Shell Creek north of Sand Springs.

A bitter, and at times almost violent, debate developed over the issue. Avery and other Spavinaw opponents were accused — erroneously, it turned out — of holding financial interests in seeing the project go through. It did, eventually, with Spavinaw water arriving in Tulsa in November 1924.

By then, Avery was deeply immersed in the work that would lead to creation of the national highway system and U.S. 66.

Avery had been a Tulsa County commissioner from 1913-16, during which time he greatly improved local road maintenance and was instrumental in building the 11th Street bridge across the Arkansas River. It was the first major multispan concrete bridge in Oklahoma, and a few years later, was an important bargaining chip in the routing of U.S. 66.

Cyrus Avery Centennial Plaza, with its life-size bronze “East Meets West,” is at the east approach to this bridge, which is now on the National Register of Historic Places.

During this time, Avery also became involved in the Good Roads movement. In 1924 he became state highway commissioner. He was also appointed to the committee connecting existing state and local roads into a national highway network.

At that time, the state Highway Department and the federal Bureau of Public Roads were small and mostly administrative in nature. Virtually all road building and maintenance in the United States was controlled by county commissioners, and most of them wanted it to stay that way.

Avery, though, believed a real highway system could only be realized through a state and federal partnership. This required wresting away some of the county commissioners’ control of government jobs and money, and convincing a reluctant federal government to join in.

The intermediate step was a network of private organizations promoting more than 200 cross-country “auto trails,” or dirt and gravel roadways connecting cities throughout the nation. Avery belonged to several of these, most notably the Albert Pike Highway from Hot Springs, Arkansas, to Colorado Springs, Colorado; the Ozark Trail, which was actually its own network of roads stretching from St. Louis to El Paso; and the White River Trail, which ran from Springfield, Missouri, through Eureka Springs, Arkansas, and west to Tulsa and Ponca City.

These roads were locally and even privately maintained, and the various associations often pitted communities against each other for the right to be included on one of the trails.

From these associations the national highway system grew. The portion of the Albert Pike Highway that passed through Tulsa became U.S. 64. The Jefferson Road, which ran from Winnipeg to New Orleans through Vinita and Pryor, was the predecessor of U.S. 75.

And several stretches of Ozark Trails, including Vinita to Oklahoma City through Tulsa, were incorporated into the general route of U.S. 66.

Avery’s involvement in these organizations gave him the connections to get most of what he wanted for his highway from Chicago to Los Angeles. The one big exception was the number.

Late in the game, however, the governor of Kentucky objected. He complained that Kentucky had no “0” roads. To rectify the situation, he demanded U.S. 62, which ran from Newport News, Virginia, to Springfield, Missouri, through Kentucky, be redesignated U.S. 60.

Avery and Missouri’s chief highway engineer were livid. Their highway signs were already being made. More than that, they didn’t like being overruled by politics. Avery held out for months but finally relented; at the suggestion of Oklahoma’s state highway engineer, John Page, Avery agreed to one of the few remaining two-digit numbers, 66.

Aside from the ignominy of not ending in “0,” he thought it had a certain appeal.

Later in life, Avery seems to have rarely mentioned his connection to Route 66. Joy and Cyrus Avery II (known since childhood as Stevens) said they did not realize it until much later.

“I can remember watching the TV show ‘Route 66’ as a teenager and not having any idea our family had anything to do with it,” Joy Avery said.

Mostly they remember Avery for their trips to his ranch near Mannford and his sometimes philosophical observations on life.

“What I realize now is that he didn’t talk much about himself,” Stevens Avery said. “He talked to us about things he thought would interest us. He didn’t toot his own horn.”

Cyrus Avery’s later years were not entirely kind. Most of his money evaporated during the Depression. He was pushed off the highway commission in 1926, finished 10th in a 15-way Democratic gubernatorial primary in 1934 and was dumped from his WPA job when it was learned he’d bought a Nowata County farm on which a small flood control dam was being built.

He ran for Tulsa County Commissioner in the 1940s and lost. His son Gordon died suddenly while still in his 30s. At nearly 80, Cy Avery took a sales job with Lock-Joint, the company that had made the pipe connecting Spavinaw to Tulsa.Through it all, Avery seemed to remain upbeat.

“I’m just a little guy, but I like Oklahoma and this region,” Avery said in 1956, on his 85th birthday. “I appreciate all of the kindness that has been shown me.”

He died almost seven years later, at the age of 91, while living with his daughter Helen in California at the end of Route 66.