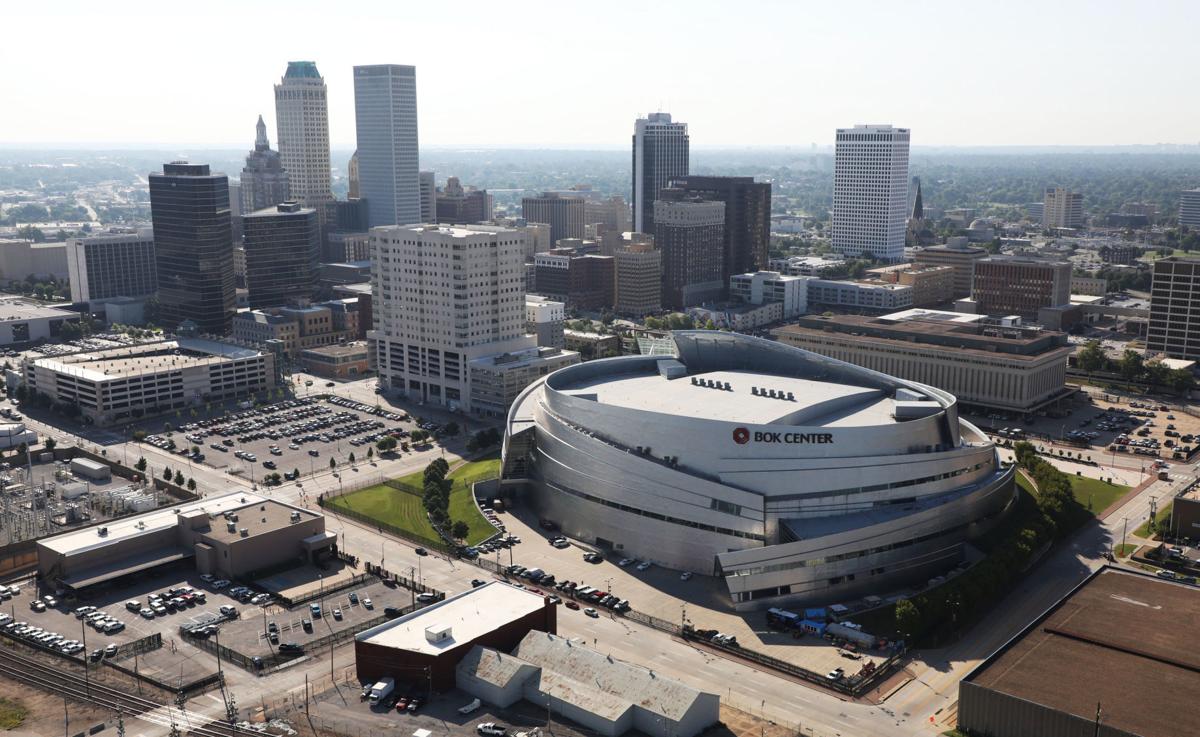 GH2 Architects provided renderings of the planned entrance and lounge on the northeast side of the BOK Center. Courtesy

GH2 Architects provided renderings of the planned entrance and lounge on the northeast side of the BOK Center. Courtesy

Visitors to Tulsa’s BOK Center will have access to a new entrance — and new amenities — thanks to a $4.7 million renovation that will be accomplished in partnership with the River Spirit Casino Resort.

BOK Center general manager Casey Sparks said work has already started on a project that, ideally, will be completed in time for a Celine Dion concert Feb. 5.

The self-enclosed River Spirit Casino Resort Lounge, while not a sit-down restaurant, will feature a bar and a kitchen that is capable of providing hors d’oeuvres and shareable appetizers for visitors. The lounge will be equipped with a sound system and a digital video board for television or advertising.

“This will be a space that we can open early, and people can come in and eat before show doors open, and then they can go to the show,” Sparks said, adding that the space is versatile enough that it can be used on nonshow dates.

Evan Falat, BOK Center director of business development, said, “What that new entrance allows us to do is make this space a separate area that we can use for one-off private events, even on a nonconcert night, so that way we don’t have to open up the whole building to let a private group utilize the space.”

The lounge will be open to the general public on show dates and will not require a special ticket.

“This is a free space for people to enter and enjoy some different options,” Sparks said.

The renovation will make use of about 5,800 square feet of preexisting space within the building, according to Sparks, but the BOK Center’s square footage will be increased a bit because a vestibule is being added to the outside of the facility.

“We’re very fortunate at BOK Center,” she said. “We have, compared to most buildings, a lot of concourse space. This is one of the few areas that really has the size and the width to renovate in a way that makes a substantial difference so we can add something like this for the patrons.”

Falat said he is “really excited” about the renovation.

“It’s such a large space,” he said. “Over the years, as we have done other projects since opening, we realized that this was kind of the last untouched area where we could develop something like this. It allows us to provide something that I would say is a necessity now, the way arenas are going. Rather than blowing something up, this is a great way that we could add a really nice amenity for our guests and allow it to be a functional space but also a really fun space, too.”

Sparks said initial funding for the renovation is being provided by the BOK Center’s accumulated fund balance, typically used for capital projects at the facility. Over time, sponsorship revenue from the River Spirit Casino Resort will pay for the project.

“River Spirit and their partnership is what has allowed us to really see this come to fruition,” Falat said. “We want to create spaces like this, but it’s like everything else we do. The community supports us, whether it’s the public buying tickets for events or businesses and corporations who have come on board as partners.”

“Together, our brands are synonymous with world-class entertainment as the two top destination locations in the Tulsa region for visitors to spend their weekdays, weeknights and weekends.”

Crofts said the tourism industry is a key sector in Tulsa’s economy and that downtown is critical to its growth. “We are very supportive of the Arena District Master Plan, and this partnership provides River Spirit an opportunity to be a part of its success.”

GH2 Architects is the architectural firm on the renovation project, and Tulsa Vision Builders is the construction manager.

The BOK Center opened in 2008. Sparks said some of the initial renderings of the facility showed an entrance where the new entrance is now being added.

Sparks said the new entrance will mimic other entrances. She said that will allow the BOK Center to hold on to the “integrity” of a facility that was designed by Cesar Pelli.

“We actually reached out to his architectural group when we were designing this and got their sign-off on it because we know that it’s such an iconic building for Tulsa and we wanted to make sure we were in line with his vision.”