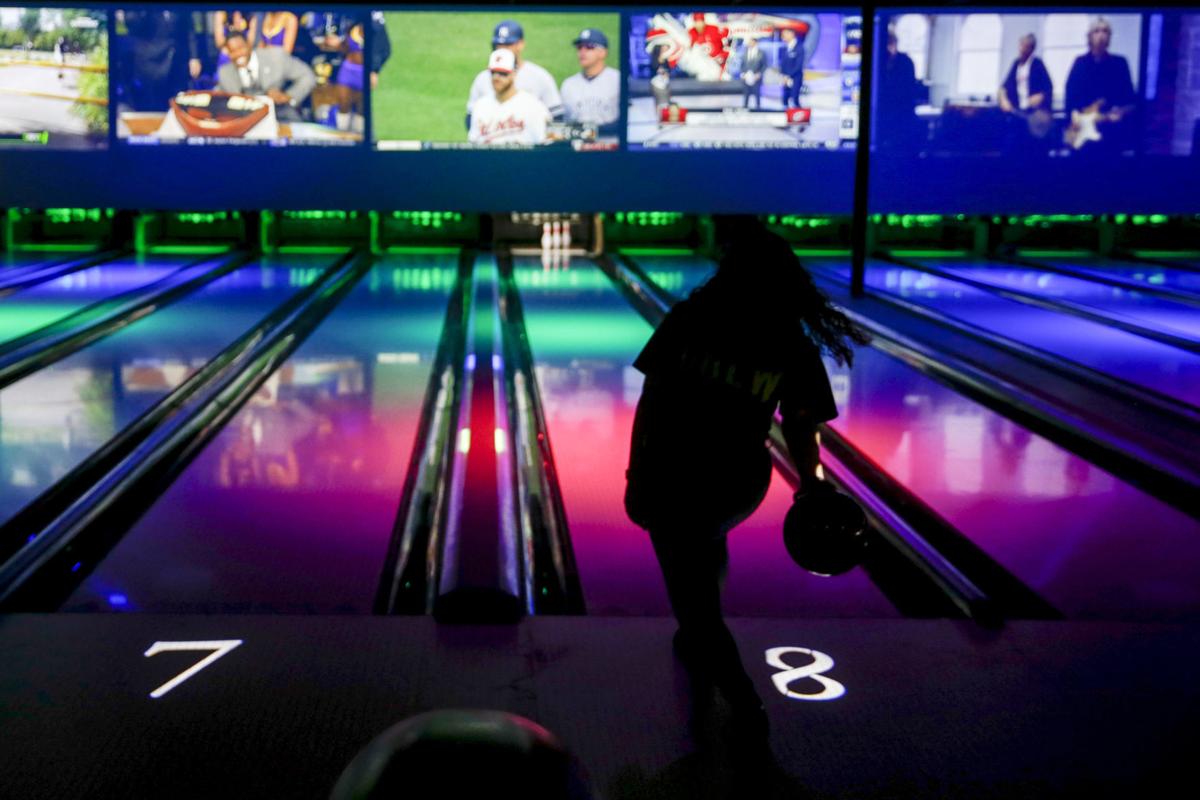 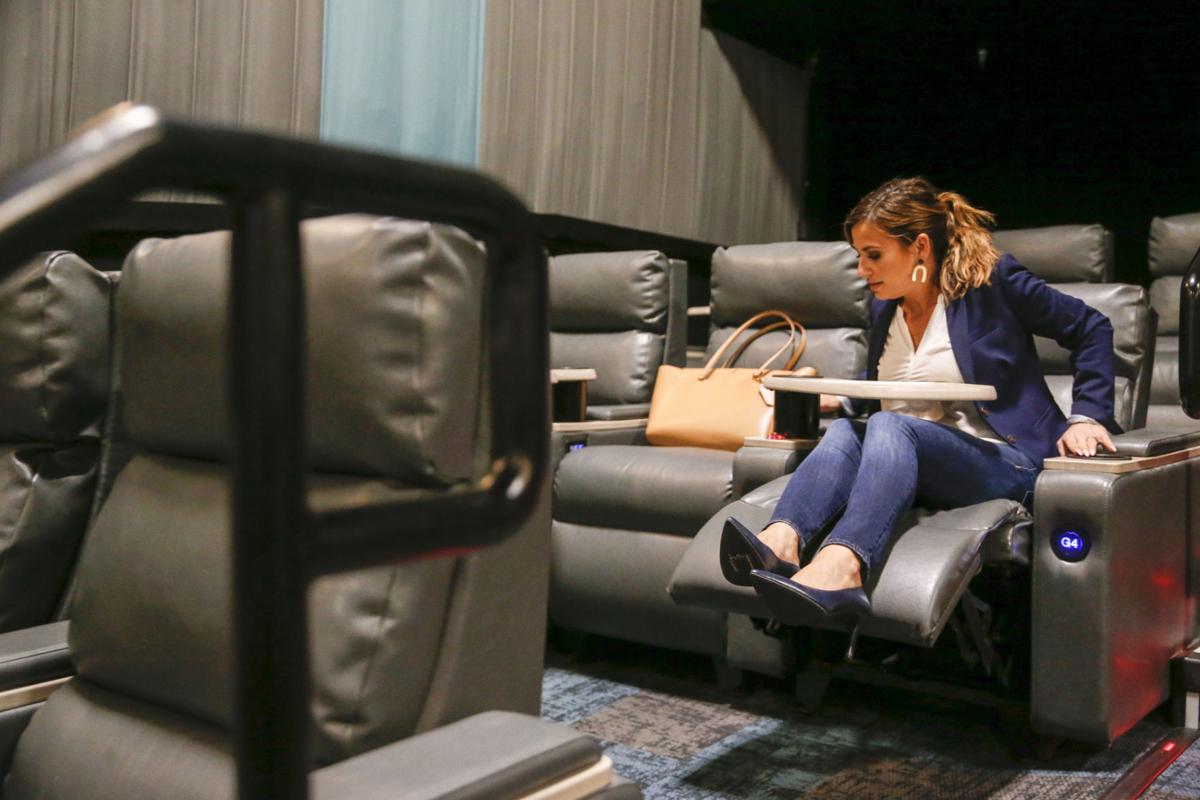 Cinergy Director of Marketing Traci Hoey adjusts her movie theater chair during a tour of Cinergy Tulsa on Thursday. 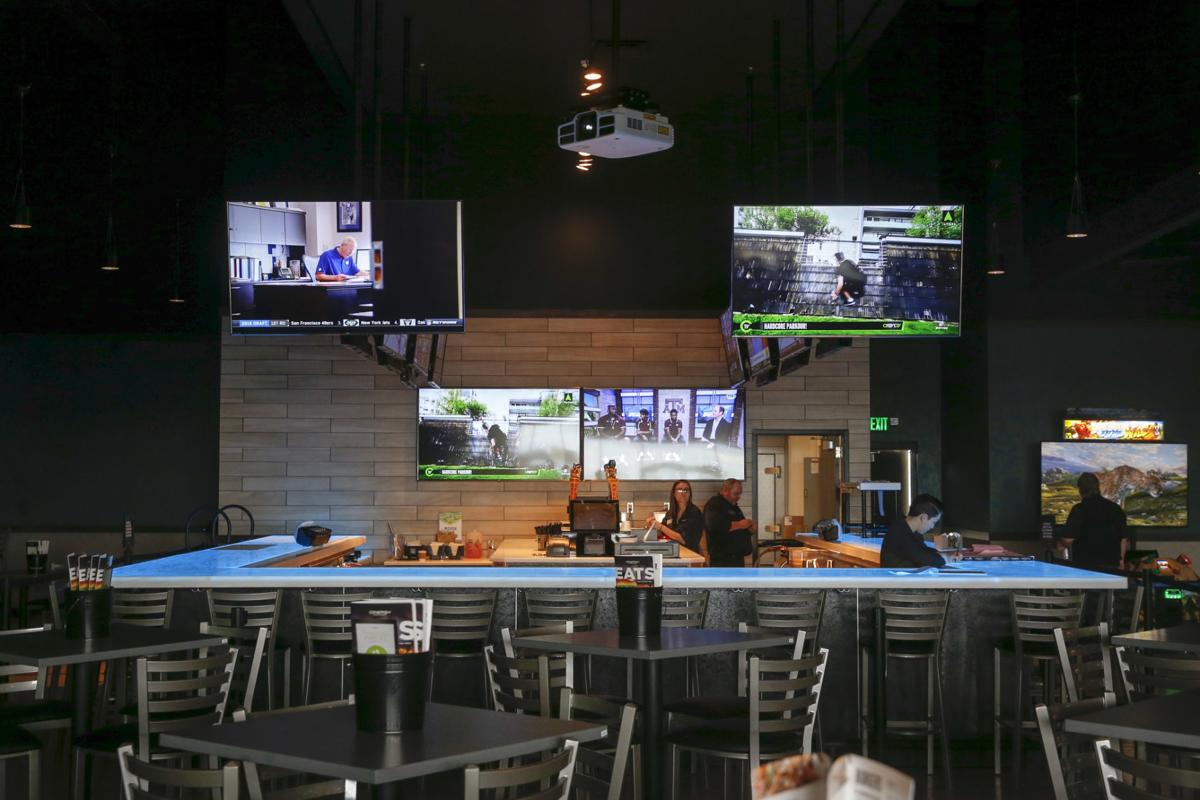 The bar area is one option at Cinergy Tulsa. IAN MAULE/Tulsa World 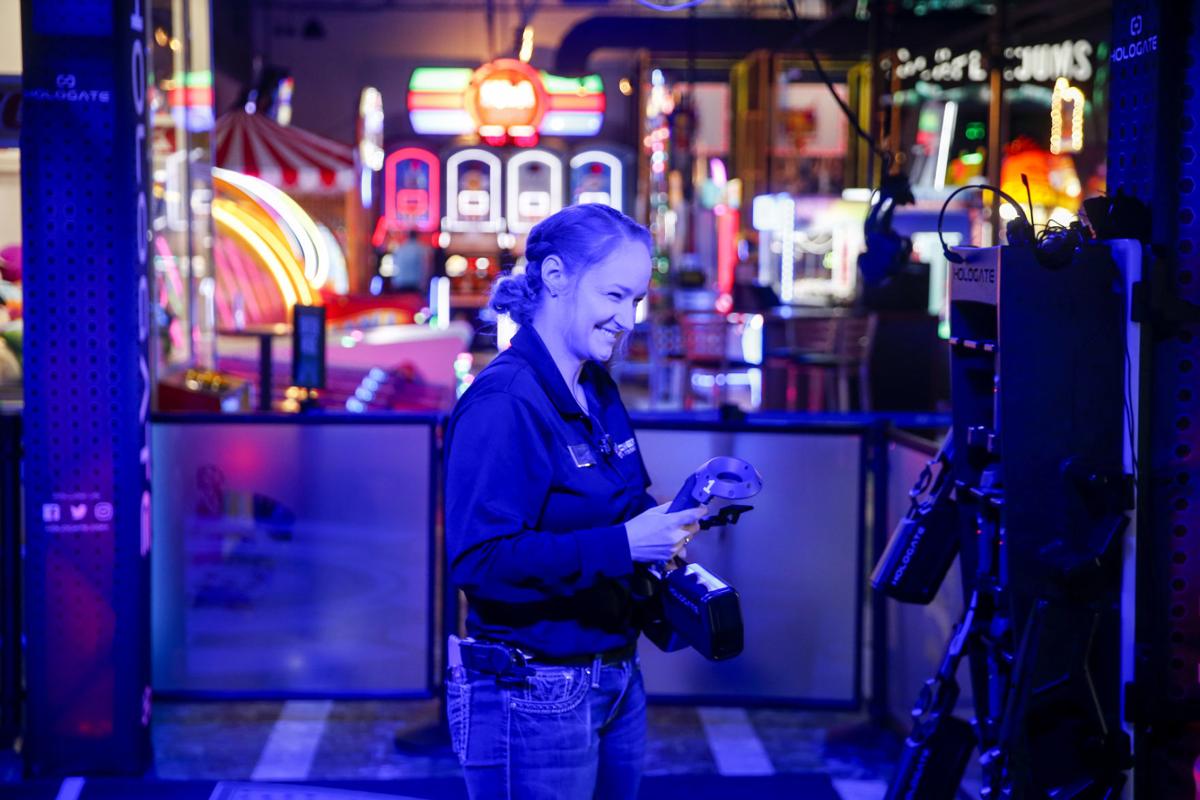 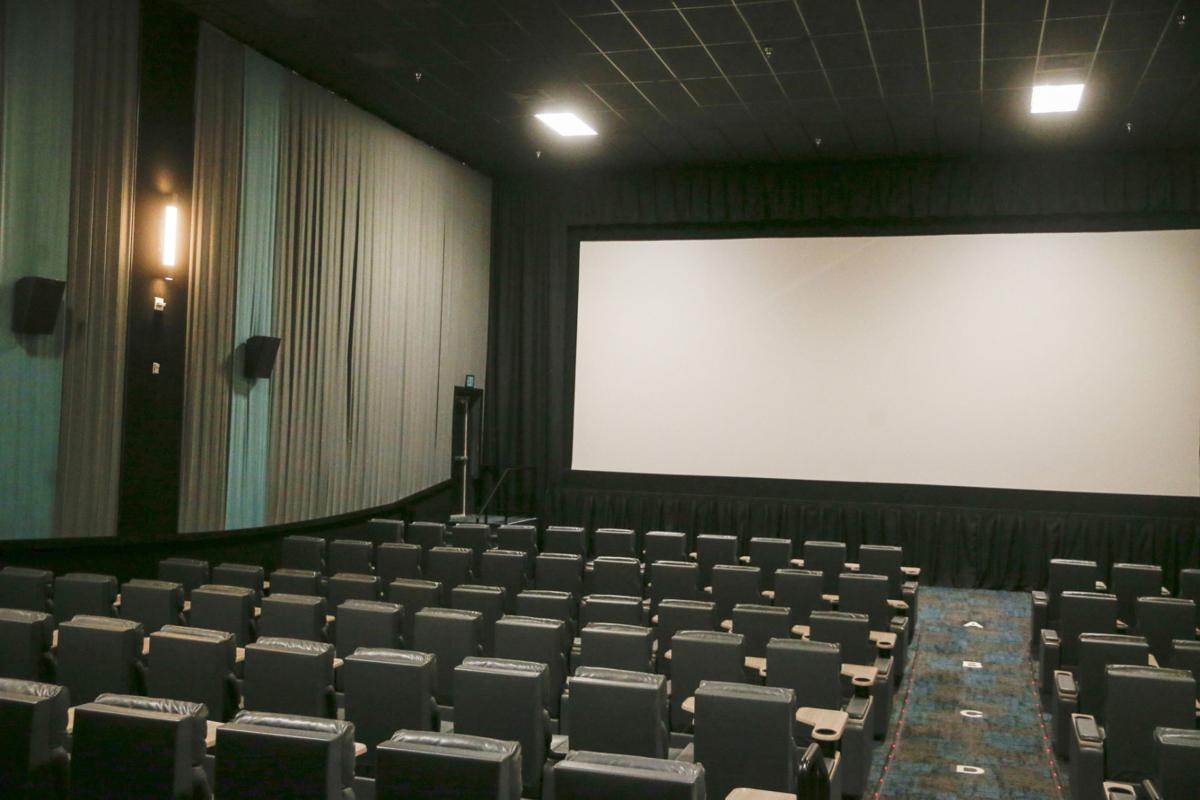 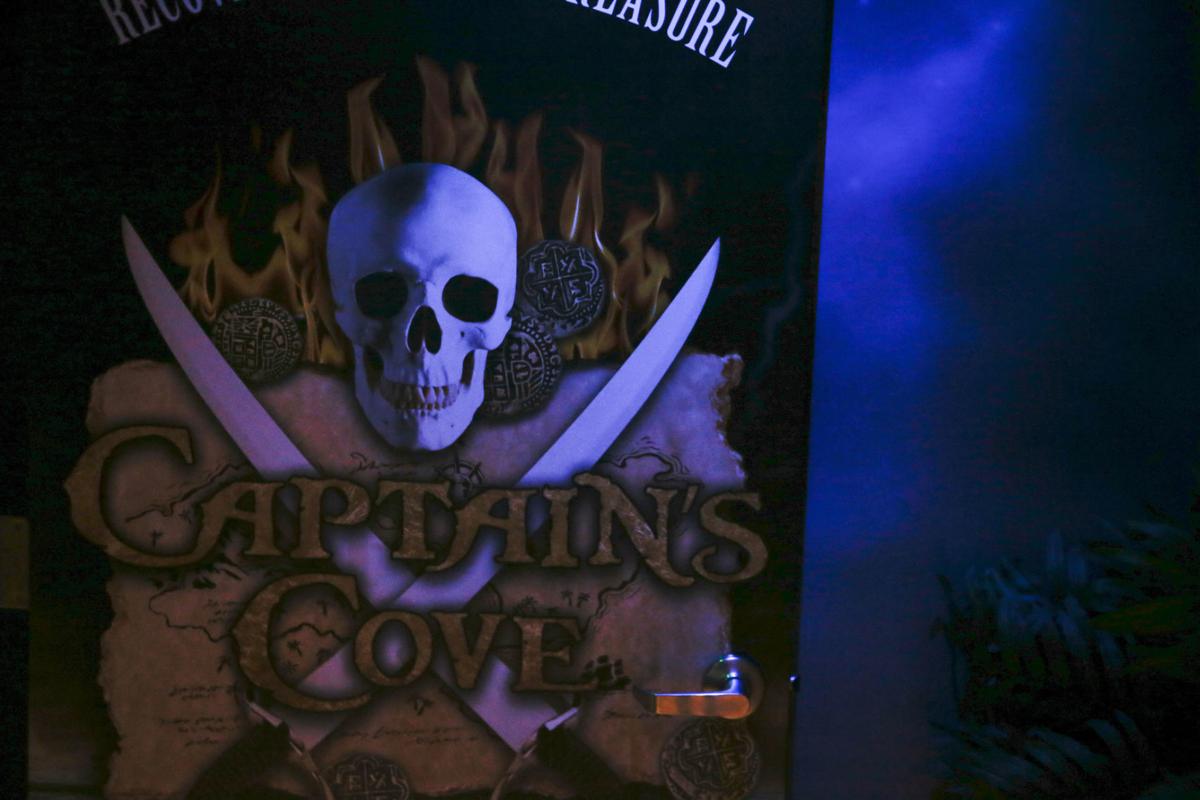 The entrance to a themed escape room at Cinergy Tulsa on Thursday, April 4, 2019. IAN MAULE/Tulsa World 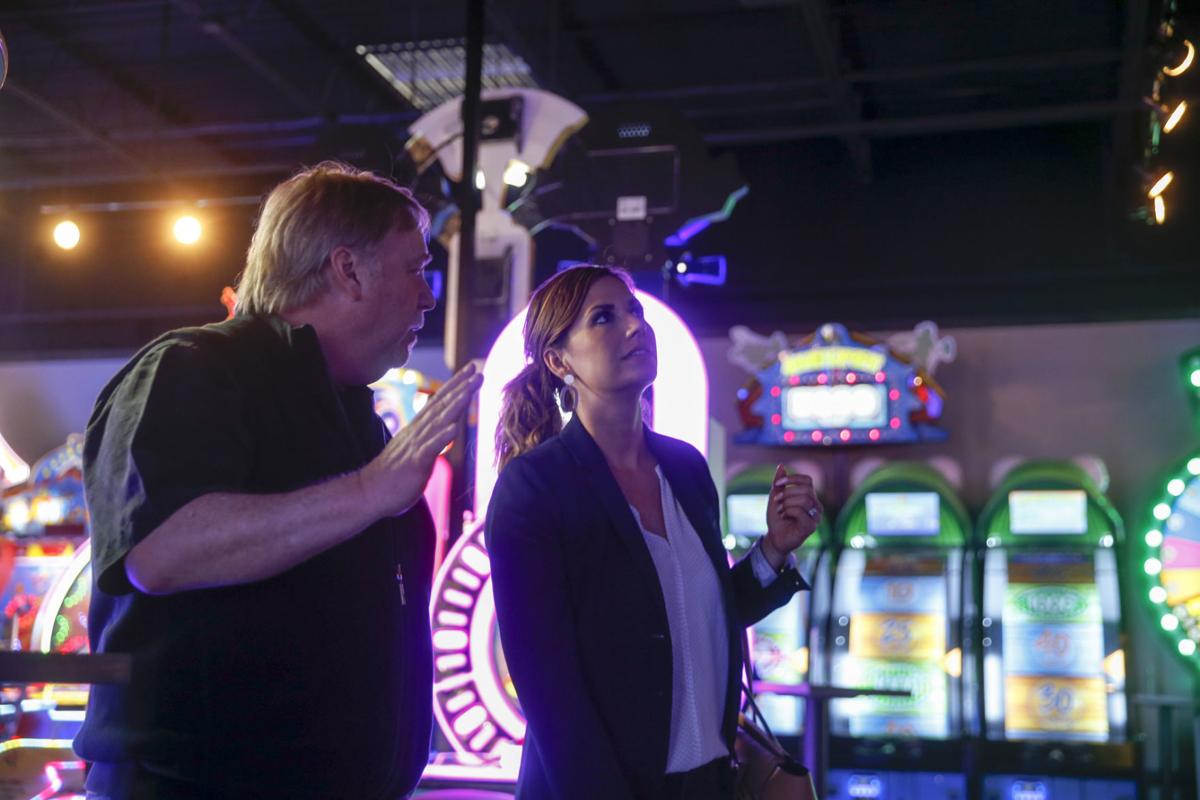 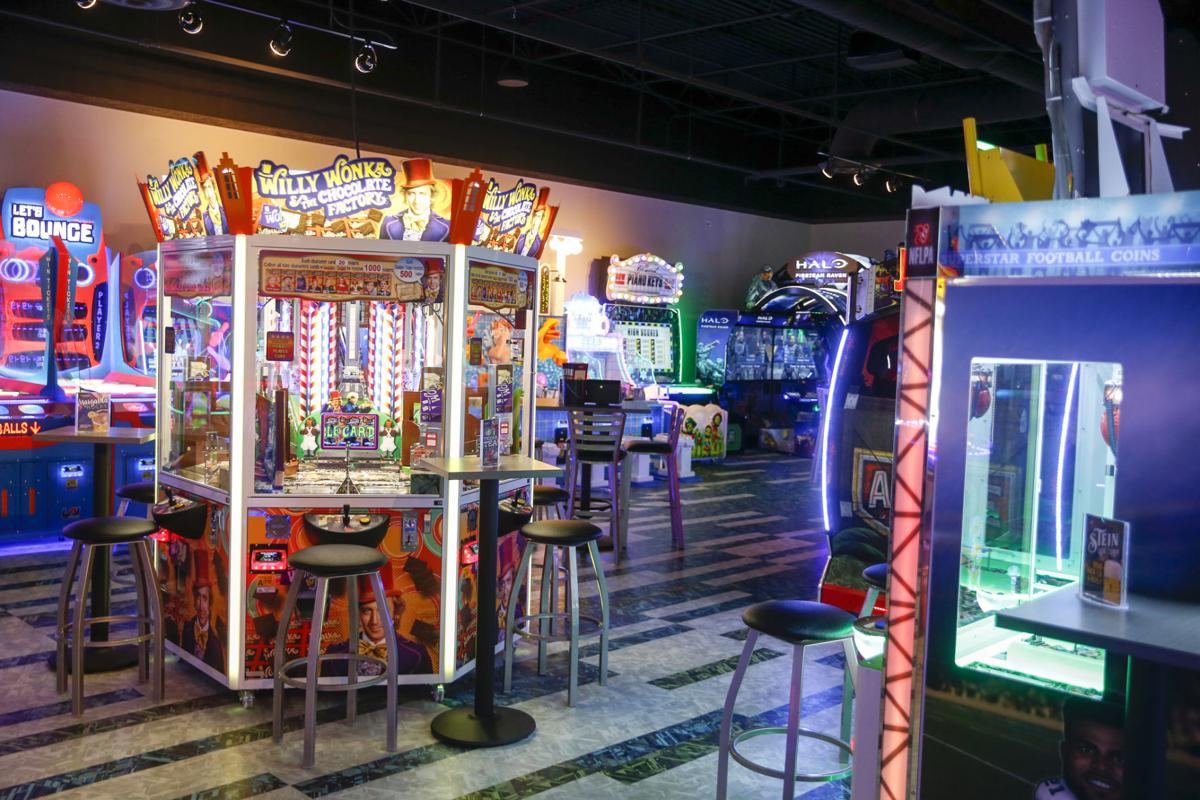 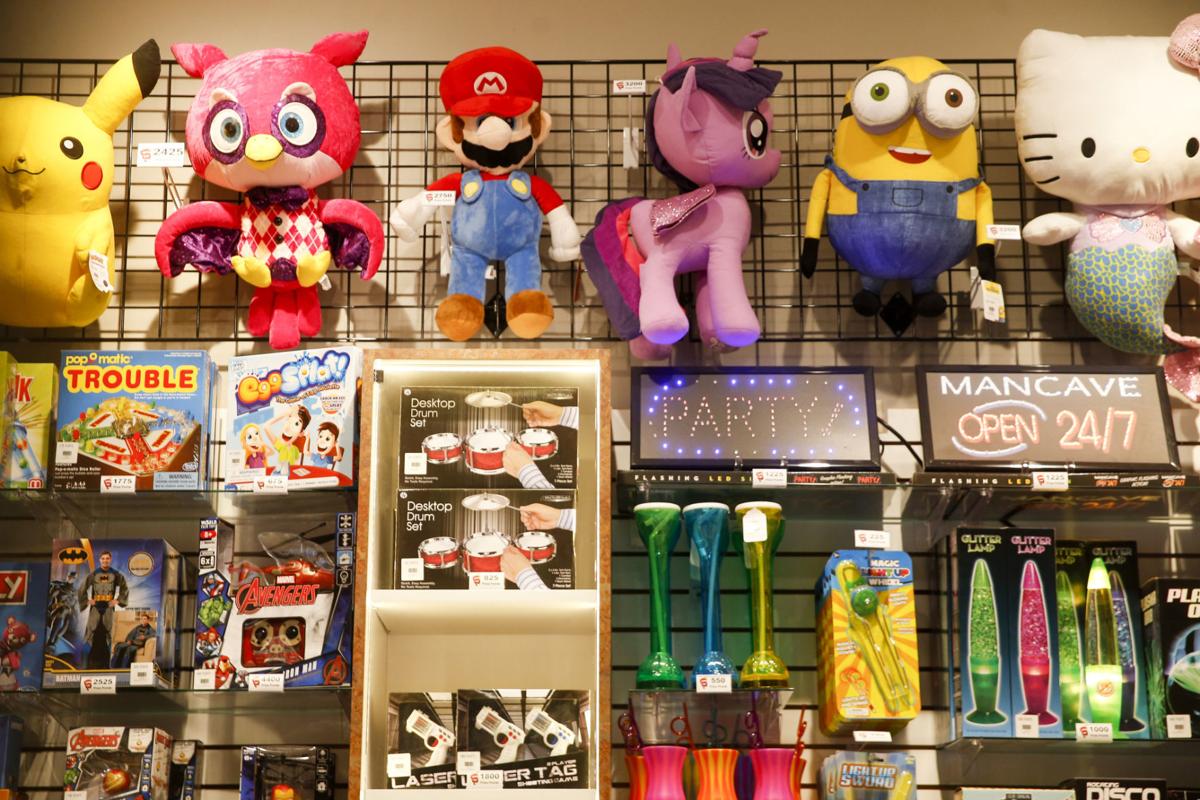 The game room is the place for prizes that customers can win at Cinergy Tulsa. IAN MAULE/Tulsa World

Cinergy Director of Marketing Traci Hoey adjusts her movie theater chair during a tour of Cinergy Tulsa on Thursday.

The bar area is one option at Cinergy Tulsa. IAN MAULE/Tulsa World

The entrance to a themed escape room at Cinergy Tulsa on Thursday, April 4, 2019. IAN MAULE/Tulsa World

The game room is the place for prizes that customers can win at Cinergy Tulsa. IAN MAULE/Tulsa World

When Cinergy Tulsa opens next week, it will be the premiere of Oklahoma’s first all dine-in cinema.

And yet there is so much more beyond those eight auditoriums with recliner seats and a wait staff delivering food and drink.

Cinergy, opening Tuesday, April 9, at 6808 S. Memorial Drive, is not merely a movie theater. It’s a 62,000-square-foot entertainment center, and it’s unlike anything the city has seen in the way that it offers unique options for all ages.

There are 14 lanes of bowling and even that features a new concept that includes a kind of “videogame bowling.”

There’s an arcade with about 90 games, and that includes virtual reality games and a videogame “ride.”

Hungry? There’s a full menu and bar, and you can order what you want from servers in the movies and the bar, or you can order on tablets for grub and signature cocktails that will be delivered to guests in the bowling and arcade areas.

There’s an activity for every member of the family, including five escape rooms with mysteries to solve, and that’s why Dallas-based Cinergy is expanding — it doesn’t merely depend on blockbuster movies to draw a crowd.

Tulsa is the company’s first location outside of Texas.

This variety of entertainment is the idea behind the “social playground” concept of Cinergy, said Traci Hoey, director of sales and marketing for the company with the slogan, “Eat, drink and be movied.”

“We’re the ultimate playground,” Hoey said. “Dad can be at the bar watching a game while Mom is on a VR ride and the kids are in an escape room. Or Mom and Dad go bowl while the kids are watching a movie. You really do have to have fun at Cinergy.”

There’s enough going on that you might prepare to take up temporary residence rather than thinking it takes two hours for a movie or an hour for dinner.

“It’s common that people come in and do more than one thing, and we have plenty of people who come in and stay for several hours,” Hoey said. “We stage events that often run four to five hours for groups.”

Company CEO Jeff Benson was a founder of dine-in cinema pioneer Movie Tavern in 2001, which was later sold to Cinemark.

With Cinergy, he adopted the idea to diversify the entertainment offerings, he told Variety magazine recently in an article about the struggles that some independent (nonchain) movie theaters have faced.

“I think our days are numbered as an industry if we don’t evolve,” he said to Variety, adding that while the box office slumped a bit this winter, the company enjoyed record weekends in the game rooms during the cold weather.

It’s a plan that attracts crowds ranging from families or groups of friends and couples on date-nights to birthday parties and corporate outings, Hoey said.

“It’s all about people coming in and having fun, maybe putting away the phones and just connecting for a while,” Hoey said.

“We see Tulsa as a thriving city, very metropolitan with its arts and music. It’s very vibrant, and for us, it’s got the right demographics.”

Here are some of the many ways in which Cinergy guests can connect:

Movies: There are eight auditoriums with seating from 35 to 159 that you won’t recognize from when the location was the former Cinemark Movies 8 or Village 8 Movies. They will show first-run films in a setting that includes all-digital projection and online-reserved seating. Those seats are gray, leather-like recliners that are heated and have call buttons to contact wait staff for menu items and drinks from the bar.

Bowling: The alley area features 14 lanes — first-come first-served — and four lanes are dedicated to “hyperbowling.” What’s that? Here’s how this game, with bowlers aiming at lighted bumpers that create multipliers for the number of pins they knock down, is described on the cinergy.com website: “A revolutionary new bowling-based attraction that is the perfect blend of bowling and gaming. The lights on the bumpers create moving targets that players aim to hit (or avoid). Each game has its own unique set of challenges and levels and includes video-game elements never seen in bowling. No more gutter balls; every shot counts every time.”

Game room: Arcade games will range from traditional games and crane-merchandise games to larger ones that guests can get on and ride or get inside of and do some shooting. For those games that issue points onto a “fun card,” there’s also a redemption store full of prizes.

The next step up in gaming is big: The Hologate Virtual Arena offers games in which players have a vest, a headset and a gun and step into a four-player arena to fire away at zombies, or take part in a lighter activity like throwing snowballs. Then there’s the XD Theater Motion Ride, a 4D action-adventure that combines immersive visual effects and audio technology for a thrill-ride that seats up to eight at a time.

Food and drinks: There’s not a restaurant, but rather multiple sites in the center from which to order food, with it delivered to your seat in the movie theater or the bar; to your lane at the bowling alley; or to a high-top table in the game room area. A full menu on the website lists shareable appetizers; burgers and sandwiches; salads; pizzas; tacos; desserts and more. Meanwhile, the bar offers frozen drinks and signature cocktails, local craft beers, canned wine and other offerings.

Escape rooms: It’s five rooms with five different themes for this “social experience” that finds players employing elements of the room to help them solve a series of puzzles to escape within an hour.

What: A 62,000-square-foot entertainment center with a movie theater, bowling, bar, arcade, escape rooms and more.

Cinergy Tulsa is now open, with even more beyond the eight theater auditoriums with recliner seats and a wait staff delivering food and drink …