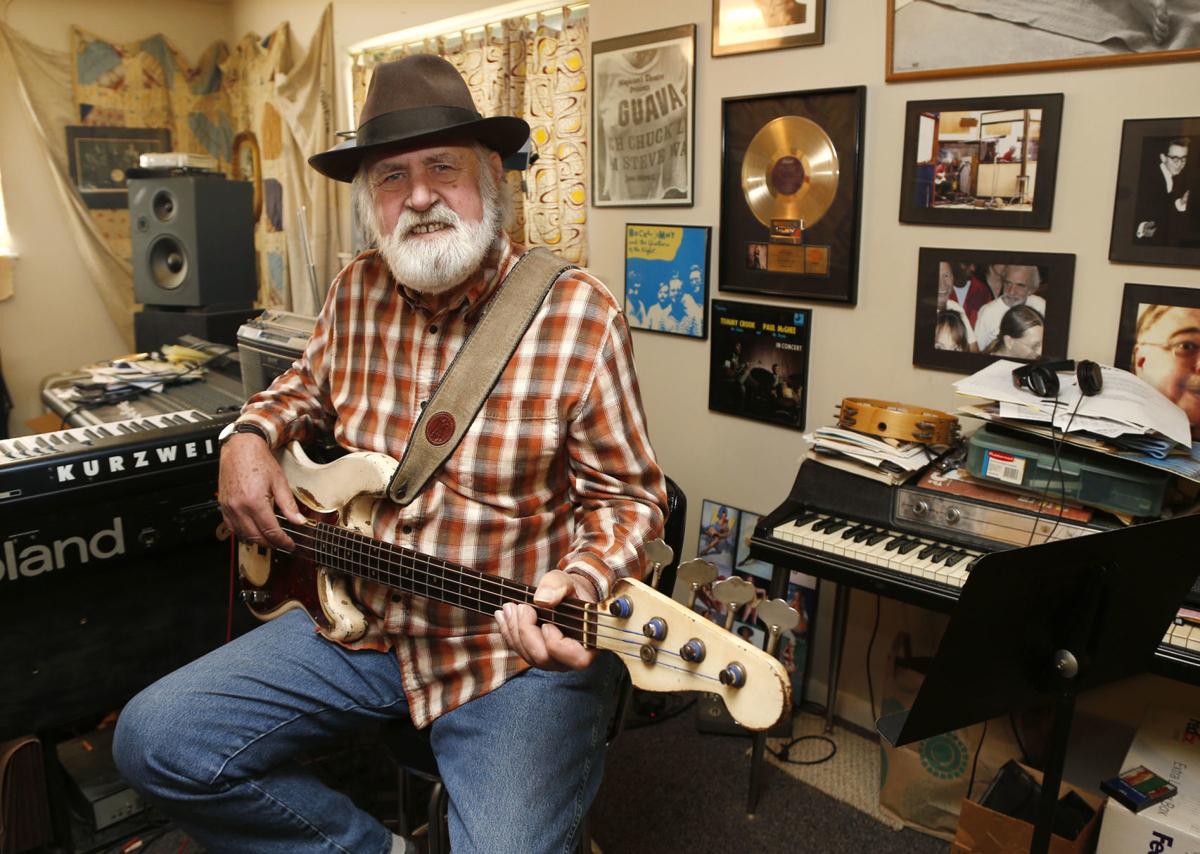 Casey Van Beek, shown at the home of band mate and producer Walt Richmond, has been part of the Tulsa music scene since the 1970s. A release party for an album by Van Beek and the Tulsa Groove is scheduled for Thursday, April 23, at Harwelden Mansion. STEPHEN PINGRY/Tulsa World 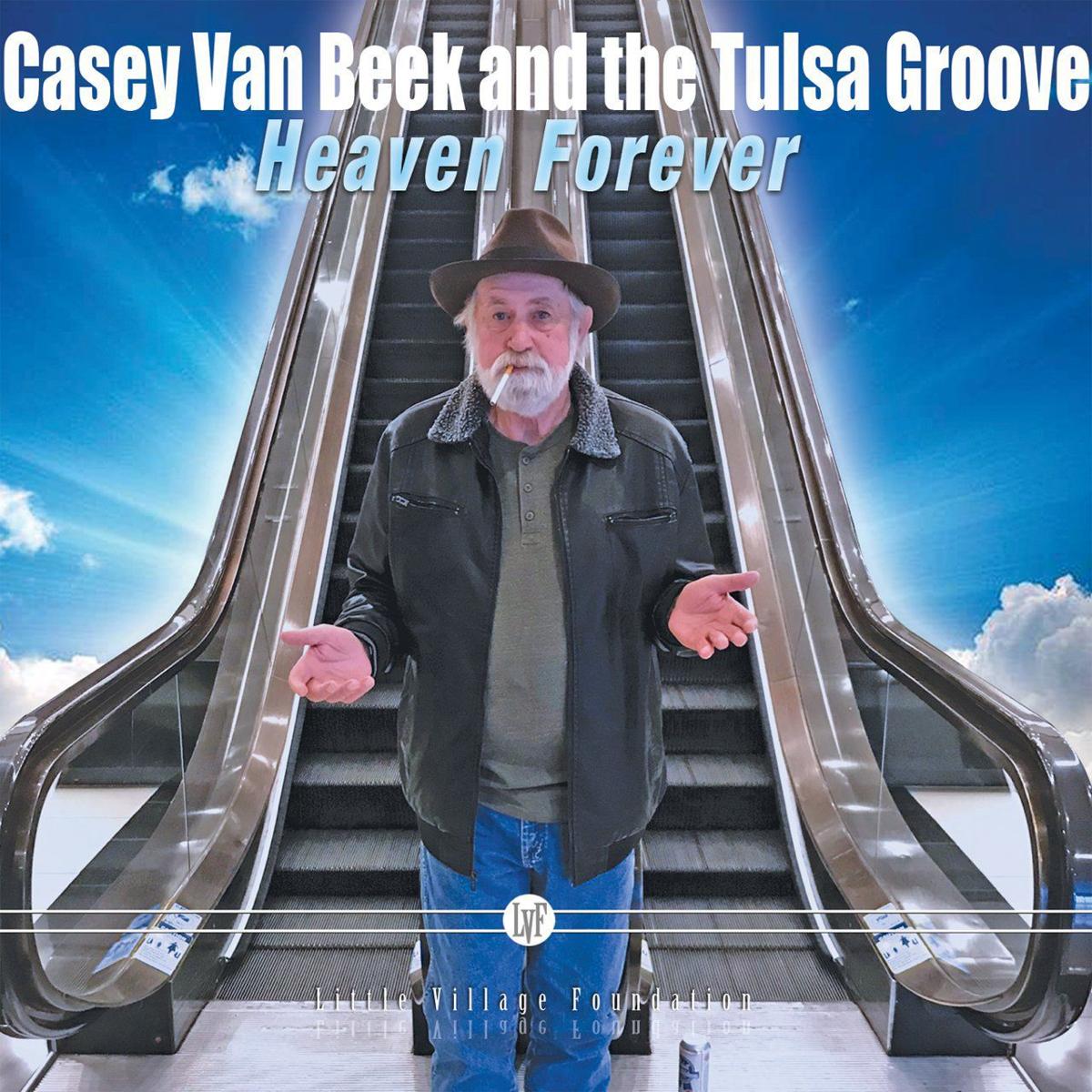 “Heaven Forever” is a new album by Casey Van Beek and the Tulsa Groove. Courtesy/Walt Richmond 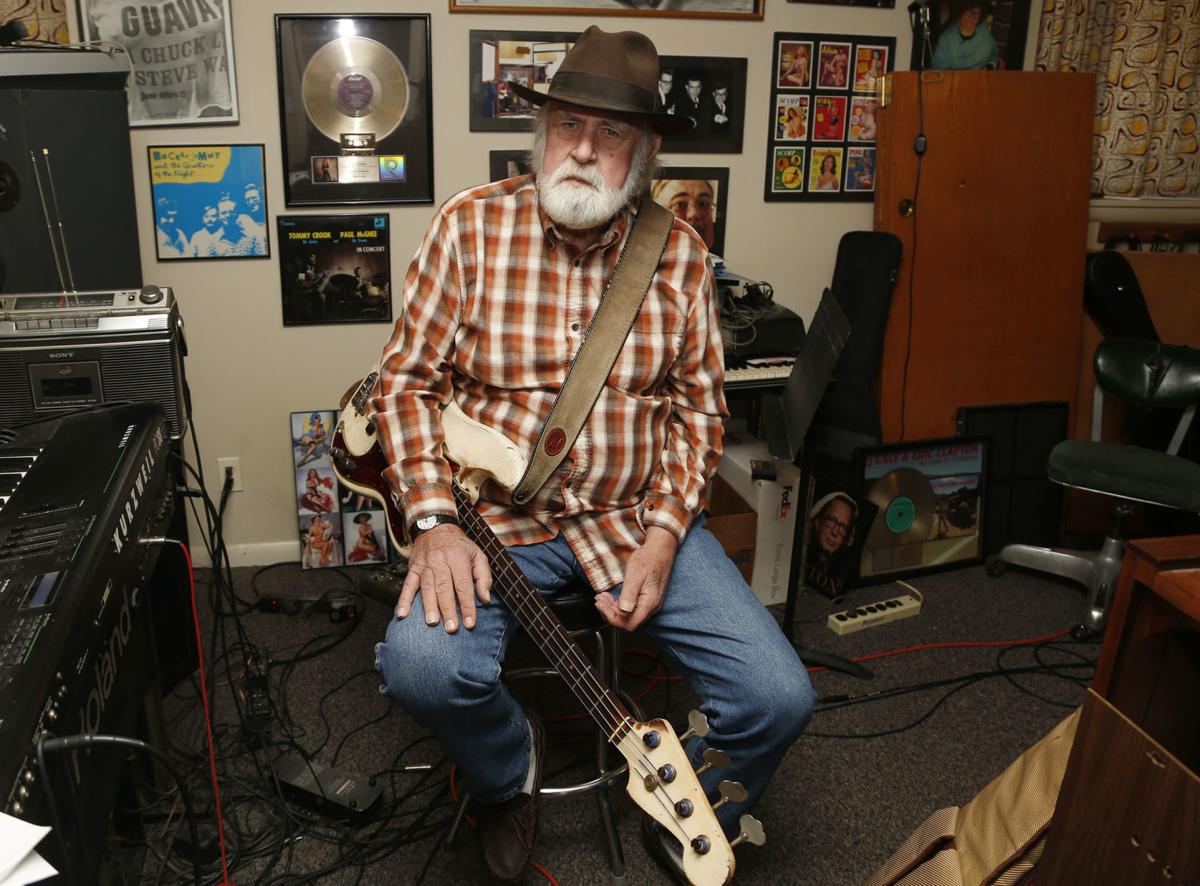 Casey Van Beek opened for the Rolling Stones and shared stages with Linda Ronstadt and Tina Turner before becoming a member of the Tractors. Now, he has a new album that will be released next month. STEPHEN PINGRY/Tulsa World 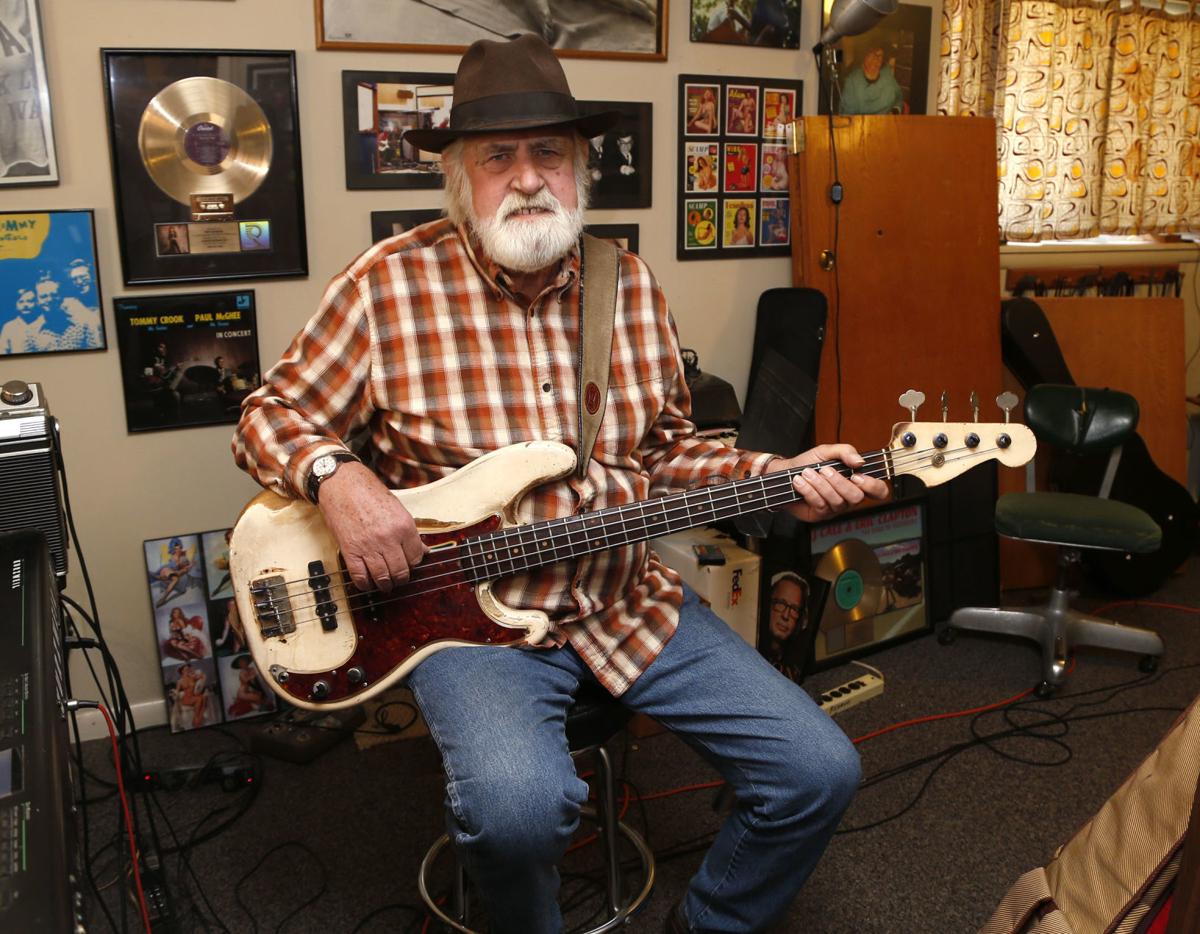 Casey Van Beek opened for the Rolling Stones and shared stages with Linda Ronstadt and Tina Turner before becoming a member of the Tractors. Now he has a new album that will be released next month. STEPHEN PINGRY/Tulsa Worldd 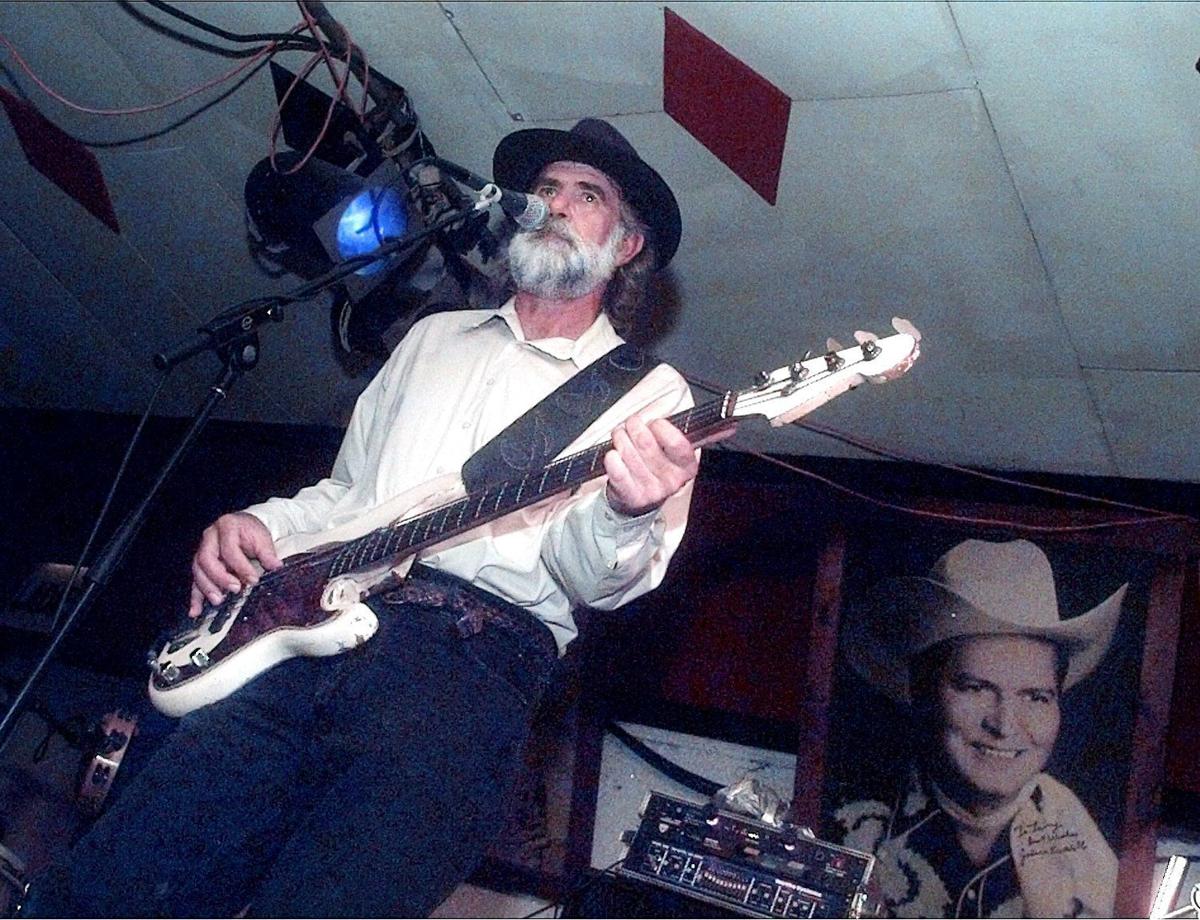 Casey Van Beek of the Tractors performed during the Tulsa Centennial Celebration in 1997 at Cain’s Ballroom. Tulsa World file 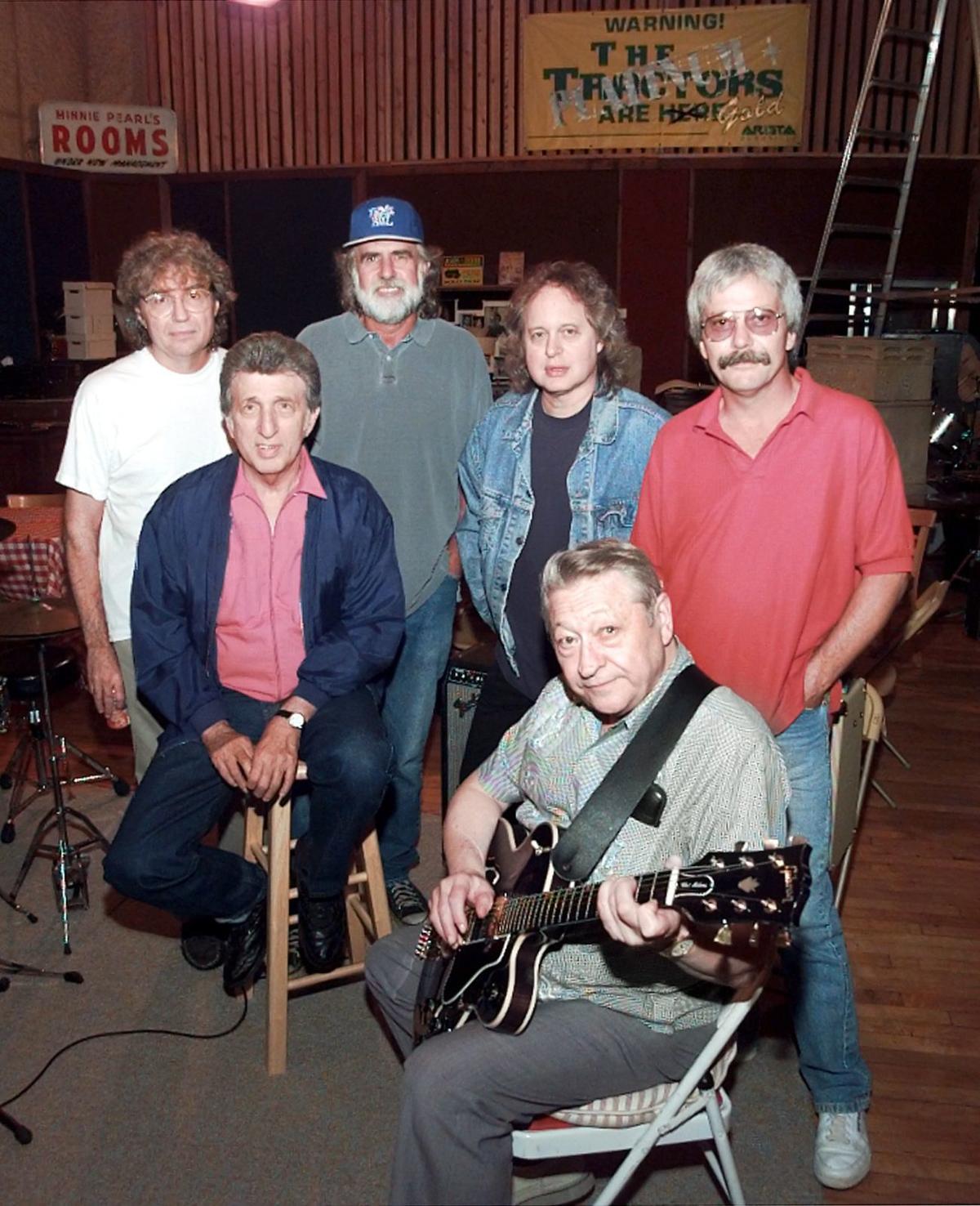 Casey Van Beek, shown at the home of band mate and producer Walt Richmond, has been part of the Tulsa music scene since the 1970s. A release party for an album by Van Beek and the Tulsa Groove is scheduled for Thursday, April 23, at Harwelden Mansion. STEPHEN PINGRY/Tulsa World

“Heaven Forever” is a new album by Casey Van Beek and the Tulsa Groove. Courtesy/Walt Richmond

Casey Van Beek opened for the Rolling Stones and shared stages with Linda Ronstadt and Tina Turner before becoming a member of the Tractors. Now, he has a new album that will be released next month. STEPHEN PINGRY/Tulsa World

Casey Van Beek opened for the Rolling Stones and shared stages with Linda Ronstadt and Tina Turner before becoming a member of the Tractors. Now he has a new album that will be released next month. STEPHEN PINGRY/Tulsa Worldd

Casey Van Beek of the Tractors performed during the Tulsa Centennial Celebration in 1997 at Cain’s Ballroom. Tulsa World file

Taking advantage of an invitation to visit the White House, Casey Van Beek sat down in the Oval Office and made himself comfortable. He put his feet on the president’s desk.

Thanks to a life in music, Van Beek has been blessed to be part of many “moments.” The White House invitation came when he was a member of the Tractors, a Tulsa-based country-rock group that caught fire in 1994. Van Beek has performed with some of the biggest names in music. Among them: Jerry Lee Lewis, Linda Ronstadt, Tina Turner. Van Beek was present when the Eagles hatched. He was in a band that opened for the Rolling Stones.

Of course, he has stories.

Let’s tell the newest one before exploring the old ones.

Van Beek and the Tulsa Groove recorded a new album (“Heaven Forever”) that will be released Friday, April 24, via the Little Village Foundation. A release party hosted by The Church Studio is scheduled Thursday, April 23, at Harwelden Mansion, 2210 S. Main St.

The album, produced by Tractors band mate Walt Richmond, is simultaneously new and retro. A news release about the album said it’s a proper bow to the group’s roots and a “summing up of the Tulsa Sound.” There are seven original songs and five covers, including a cover of JJ Cale’s “Since You Said Goodbye.” Van Beek said it’s one of his favorite Cale songs.

The release said Van Beek and the Tulsa Groove are carrying on the legendary sound of forerunners like Cale, Leon Russell and Elvin Bishop, while adding new flavors to keep the historic tradition alive for current and future generations.

Van Beek, fielding a question about the group carrying on the sound, said, “We actually couldn’t help ourselves because that’s what we do.”

Many people associated with the Tulsa Sound ventured from Oklahoma to California.

Van Beek traveled the opposite route.

Born in Holland, Van Beek was raised in the Los Angeles area. He was introduced to music when he took piano lessons as a child and, by the time he was in his teens, he was playing bass and singing in a band called the Vibrants. At that time, recording artists performed in venues like Bob Eubanks’ Cinnamon Cinder nightclubs.

“They would come through there once a week, and we would be their backup band,” Van Beek said, adding that the Vibrants were present there for about five and a half years. “It was just the greatest learning experience to get back there in the back room and run over their stuff for 20 minutes and then go out and do a show. It was real interesting. We played with pretty much everybody who had a hit record in those days.”

“B.B. King had his own band,” Van Beek said. “Ike and Tina had their band except one night their bass player didn’t show up, so I got to do that with them. That was quite a thrill.”

Eubanks, a disc jockey and game show host, promoted the Rolling Stones’ first concert in Los Angeles. Eubanks arranged for Van Beek’s band to be the opening act for the Stones and for a Dave Clark Five show. This was circa-1964 and Van Beek said the Rolling Stones had already developed a big following — screaming teenagers and all that stuff.

“I remember there were girls climbing down the curtains from the balcony trying to get down by the stage and stuff,” he said when asked about the Rolling Stones’ show. “They were out in the parking lot laying on the ground in front of the cars so they couldn’t move, so the band couldn’t get out of there.”

Van Beek said his group also did a few touring dates with British duo Peter and Gordon before he began backing up Ronstadt. Other members of her band were Glenn Frey and Don Henley, who, oh by the way, struck out on their own to form the Eagles.

“Glenn said, ‘Man I wish the three of us could do this deal. I’ve got this deal coming up.’ ” But Van Beek had his own deal cooking, so he did not join the Eagles-in-waiting, and he declined an offer from Ronstadt’s tour manager to stick with her. Van Beek’s “deal” was a band named Moccasin, which had a record on the way. Asked for a description of Moccasin’s music, Van Beek said Moccasin was in the same sort of genre as country-rock band the Flying Burrito Brothers.

Moccasin released one album. At the time, the record label had Iron Butterfly in the stable. “And that’s where all their energy went,” Van Beek said. “We just rode off into the sunset.”

Really, Van Beek rode off to Tulsa. He moved to Tulsa in 1975, but he came a couple of years earlier to do some work with Don Preston, described by Van Beek as one of the original Shelter People (part of Russell’s Shelter Records label). A working relationship with Preston continued, but when Preston decided to return to California, Van Beek preferred to hang around in Tulsa. So far, the hang-out has lasted 45 years, and Van Beek is enough of an Oklahoman to be Thundered up.

Why Tulsa? Van Beek said his folks were dairy farmers. He grew up around horse ranches and dairy farms. “When I got here and there were all these wide open spaces, it just felt like home.”

And then there’s this: He loved the music scene in Tulsa.

“It was just right up my alley,” he said. “I was out in California doing country rock in the early days when they had Poco and the Burrito Brothers and all those guys branched off and were doing country kind of stuff. ... When I came out here, I thought, well, yeah, there is going to be some really great country and all that stuff out here in Oklahoma and I can get into that. But it turns out they were doing this Tulsa kind of stuff. It was just kind of a conglomeration of everything. I just fell right into it.”

Van Beek said Richmond and Jim Byfield were the first guys he played with (at the Magician’s Theater) when he got to Tulsa. Richmond and Byfield are among Tulsa Groove musicians on the new album.

Van Beek’s most commercially successful Tulsa collaboration was with the Tractors. Led by late Tulsa Sound figure Steve Ripley and with a nucleus of Van Beek, Richmond, Ron Getman and Jamie Oldaker, the Tractors were responsible for the fastest-selling debut for a country group in music history. The Grammy-nominated single “Baby Likes to Rock It” was a big hit, and a video for the song earned video of the year honors at the Country Music Association Awards in 1995. The song was responsible for helping Van Beek hoist his feet onto Bill Clinton’s desk.

‘Before you know it’

You’ve heard of the Led Zeppelin song “Stairway to Heaven.”

The cover of Van Beek’s new album shows him standing in front of an escalator that presumably leads to heaven.

“I can’t figure out if I’m going up or coming back down,” he joked.

Van Beek said it was kind of an accident that the album ever got made. He said he got together with Richmond, and they started recording some old songs.

“Stuff started sounding pretty good,” he said. “Well, hell, let’s write some songs. We started in on that and, before you know it, we had an album.”

Van Beek said Richmond got manager and producer Mike Kappus, who has Cale ties, interested in the album and, specifically, the title track. “So he went to bat for us and here we are.”

The album will be available on all major digital platforms and can be pre-ordered. It’s the first album in Van Beek’s long career to bear his name. The veteran “side guy” is out front.

“Yeah, I really like it,” he said. “I think it’s a good collection of songs. I think it would be easy for somebody to put it on and just listen to the whole thing. I gave a CD to a friend of mine and he said, ‘Man, I’ve listened to this thing 10 times.’ I gave it to him and, the next time I saw him a few days later, he thought it was just the greatest.”

Van Beek was asked what he wants to happen with the record. He repeated that it was kind of an accident.

“But I’m hoping it will strike a nerve with some part of the population and maybe we’ll go out and play a few gigs or something,” he said, indicating that the band could play selected venues here and there. “We’re not going to tour around because we are too damn old for that.”

A release party has been scheduled for a new album ("Heaven Forever") by Casey Van Beek and The Tulsa Groove. The party will include a meet-and-greet with the band, wine, snacks and live music.

Tickets: thechurchstudio.com (The Church Studio is hosting the event.)

For more information on members of Casey Van Beek and the Tulsa Groove, go to http://littlevillagefoundation.com/casey-van-beek-and-the-tulsa-groove/