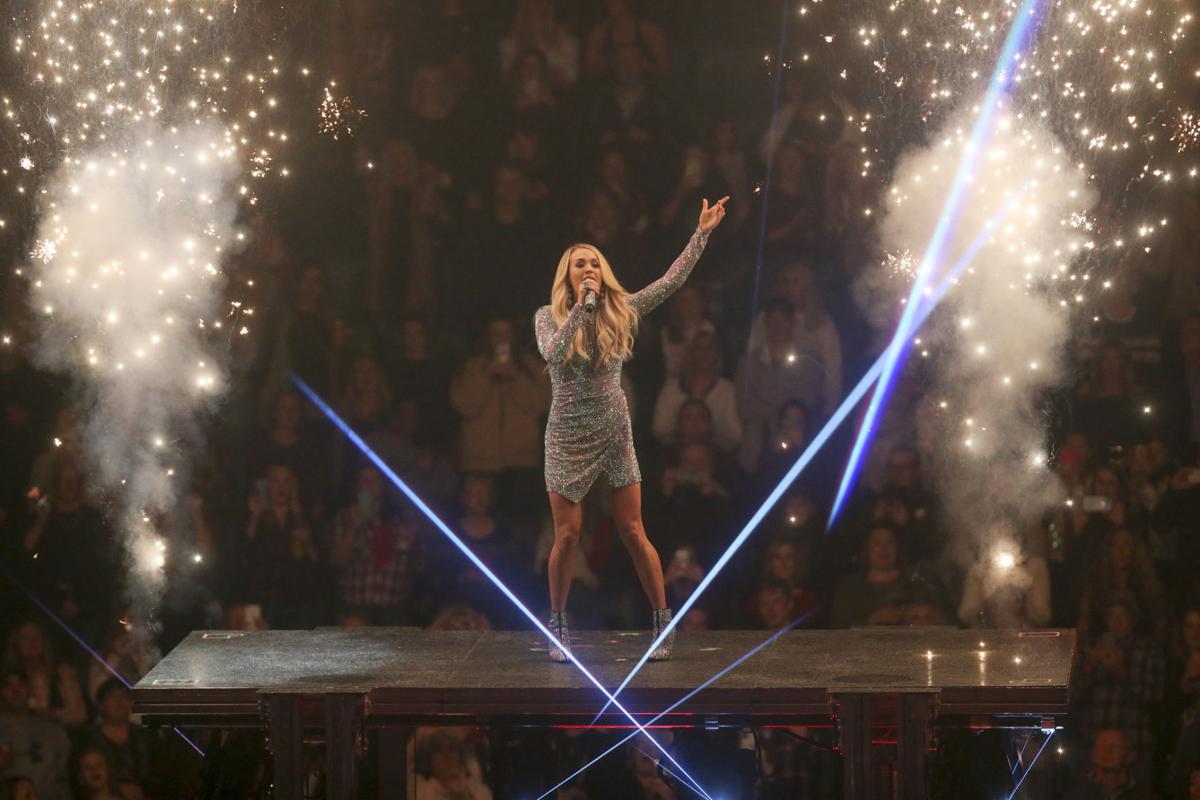 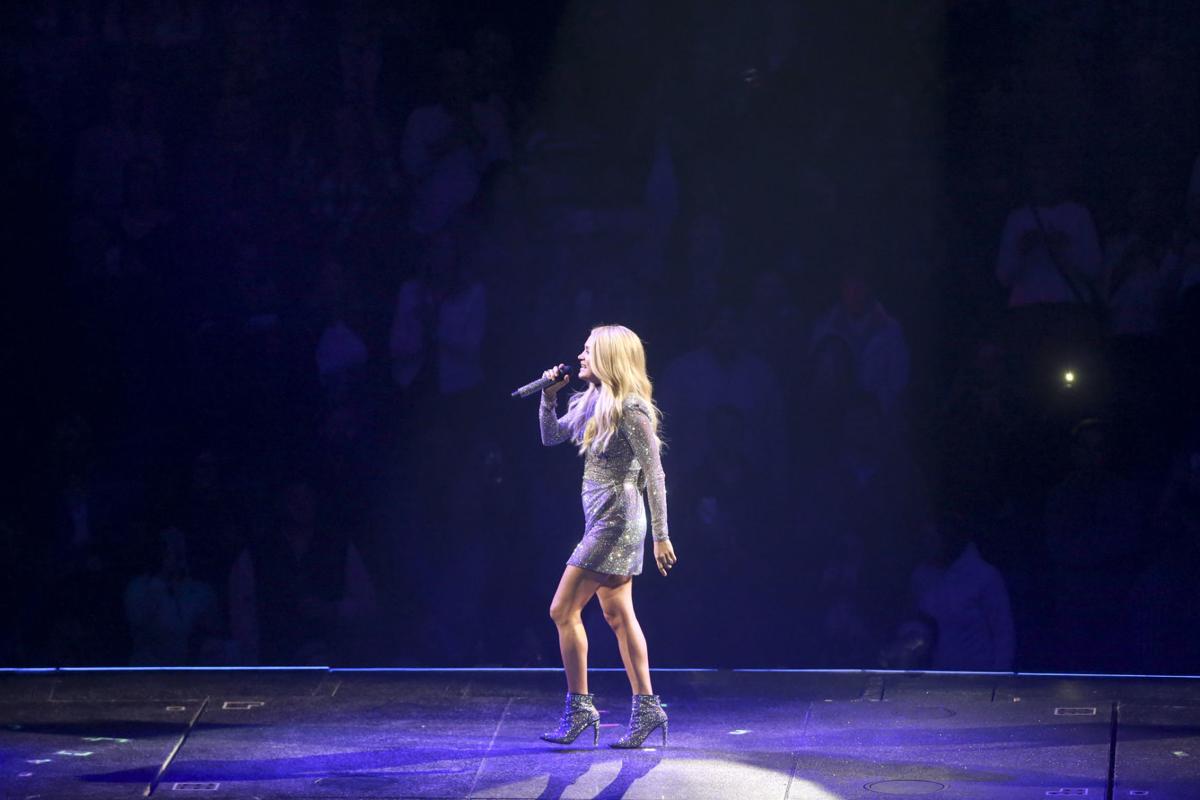 2: Two Underwoods were on stage late in the two-hour set. Carrie’s mother, Carole, joined her and they teamed up to perform “The Champion.”

After the song ended, Carrie stood side by side with her mother so they could take a selfie together.

Said Carrie: “That was awesome.”

As a prelude to the family act, Carrie told the crowd she was going to be joined on stage by someone who was a teacher for 25 years (“Thank you, teachers”) and she followed by saying the guest has three daughters and volunteers at a local animal shelter.

“I’m not reading any of this off the teleprompter,” Carrie said. “How do I know all of this stuff about this woman? Because this is my mama. She is a champion. She has never sang in front of a ton of people like this before so when she gets on this stage, you guys better give her all your love and all the support.”

The mother-daughter team-up was a crowd-pleaser.

15: Carrie told the audience it had been 15 years since she tried out for “American Idol.” It’s crazy how time flies and it’s crazy how her life has changed since.

“This is what I always wanted to do, but how do you get some place like this?” she said, telling the audience she tried out for “American Idol” shortly after performing at Rooster Days locally. That generated some cheers.

“None of you guys were there. C’mon on,” Carrie said. “None of you were one of the five that was listening. But I remember seeing on TV they were having auditions for ‘American Idol’ and I thought, man, what are the chances? My mom said ‘I will drive you if you want to go.’ From that second onward, my course in life was changed. Everything else is history. Here we are here today because of one decision to do something crazy, to follow some big crazy dream.”

Carrie told those in the crowd that if there is something in life they want to do, even if it seems crazy, just go for it.

“Do the crazy things,” she said. “You never know. You might get everything, every dream, you have always wanted.”

52: Carrie of course mentioned her hometown of Checotah and it happened 52 minutes into the set. “I don’t even have to say Checotah, Oklahoma, when I am talking about it because you guys know where it is,” she said. (It’s 70 miles away.)

6: One of the “wow” moments of the show came when six voices — all belonging to women — teamed up to honor some of the greatest female performers in country music history by covering a medley of their songs. The collaboration featured Underwood partnering with her opening acts, Maddie & Tae and the girls in Runaway June. The medley included songs made famous by Tammy Wynette, Patsy Cline, Loretta Lynn, Dolly Parton, the Judds, Trisha Yearwood, Martina McBride, Faith Hill, Reba McEntire and Shania Twain.

During an earlier medley, Carrie showed off her pipes by nailing a bit of Aerosmith’s “Dream On.”

3: Carrie thanked fans for being patient between tours, reminding them it had been three years since the previous tour.

“It has been a minute,” she said. “There are lots of reasons for that. A couple are I had myself another baby earlier this year. I got my boys out on tour with me. It’s such a blessing being able to bring them out. It’s hard, but it’s also really wonderful at the same time. I’m like getting ready — hair and makeup and all that stuff — and they are there in the floor playing with toys. It’s just so nice. Every day is bring your kid to work day.”

Carrie said another reason it took so long to go back on tour was because she wanted to dive into her newest album and co-produce for the first time.

“It’s like the kid thing,” she said of producing. “It’s super challenging, but also wonderful and rewarding at the same time to be there for the first note to the last note and making decisions and figuring out what kinds of stories these songs wanted to tell. I had a lot of fun with that, so thank you guys for waiting and thank you for being here.”

5: Costumes. The stage was set up with lifts that allowed Carrie to rise or sink out of sight. When she disappeared from view, she returned quickly afterwards wearing different (and spectacular) duds.

360: People in the crowd got a 360-degree view of the show because of a ribbon-shaped stage on the BOK Center floor. Traveling along the ribbon allowed Carrie to interact with fans at every vantage point and with musicians who were stationed along the path.

4: There are only four more stops until the tour ends. The tour is far enough along that BOK Center visitors saw and heard a show that hit all the right notes.

2005: That was the year Carrie won “American Idol” and graduated from amateur to pro. The Tulsa concert confirmed she’s a pro at the top of her game.

Two Underwoods were on stage late in the two-hour set. Carrie’s mother, Carole, joined her and they teamed up to perform “The Champion.”