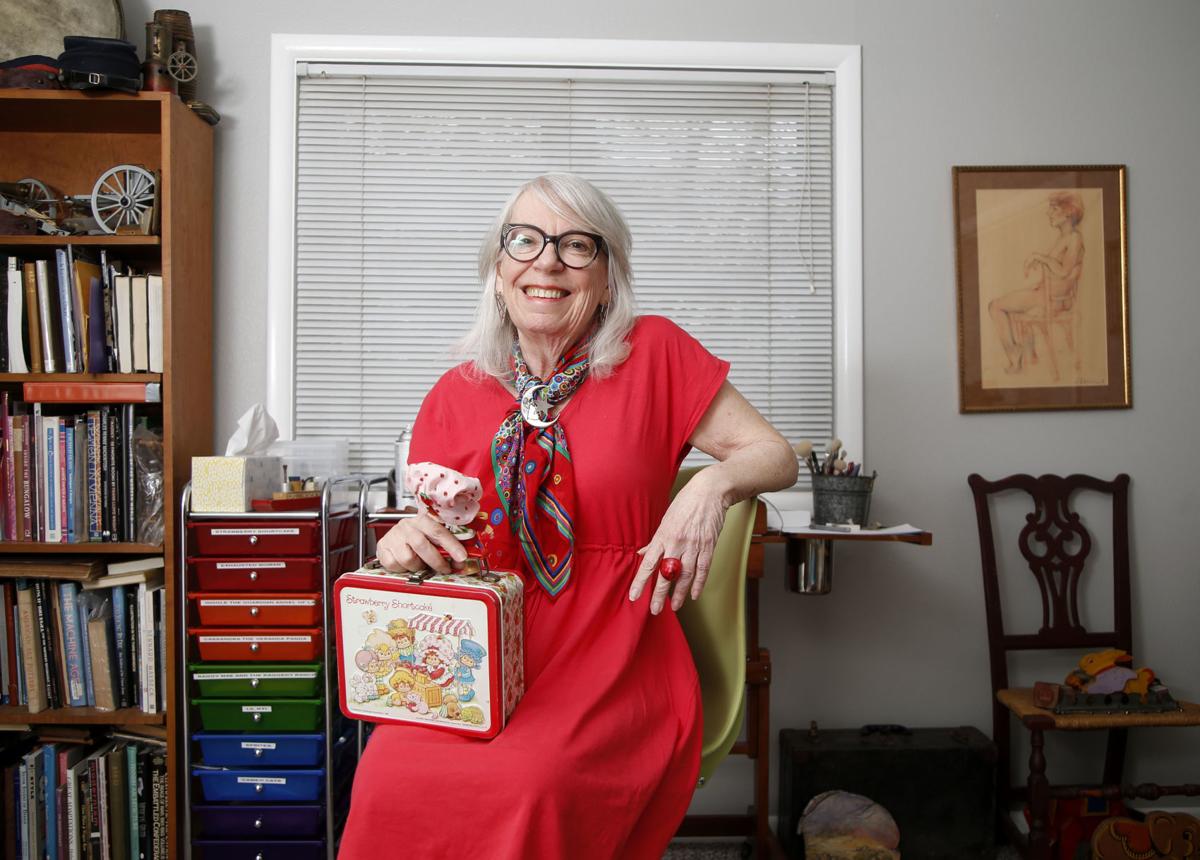 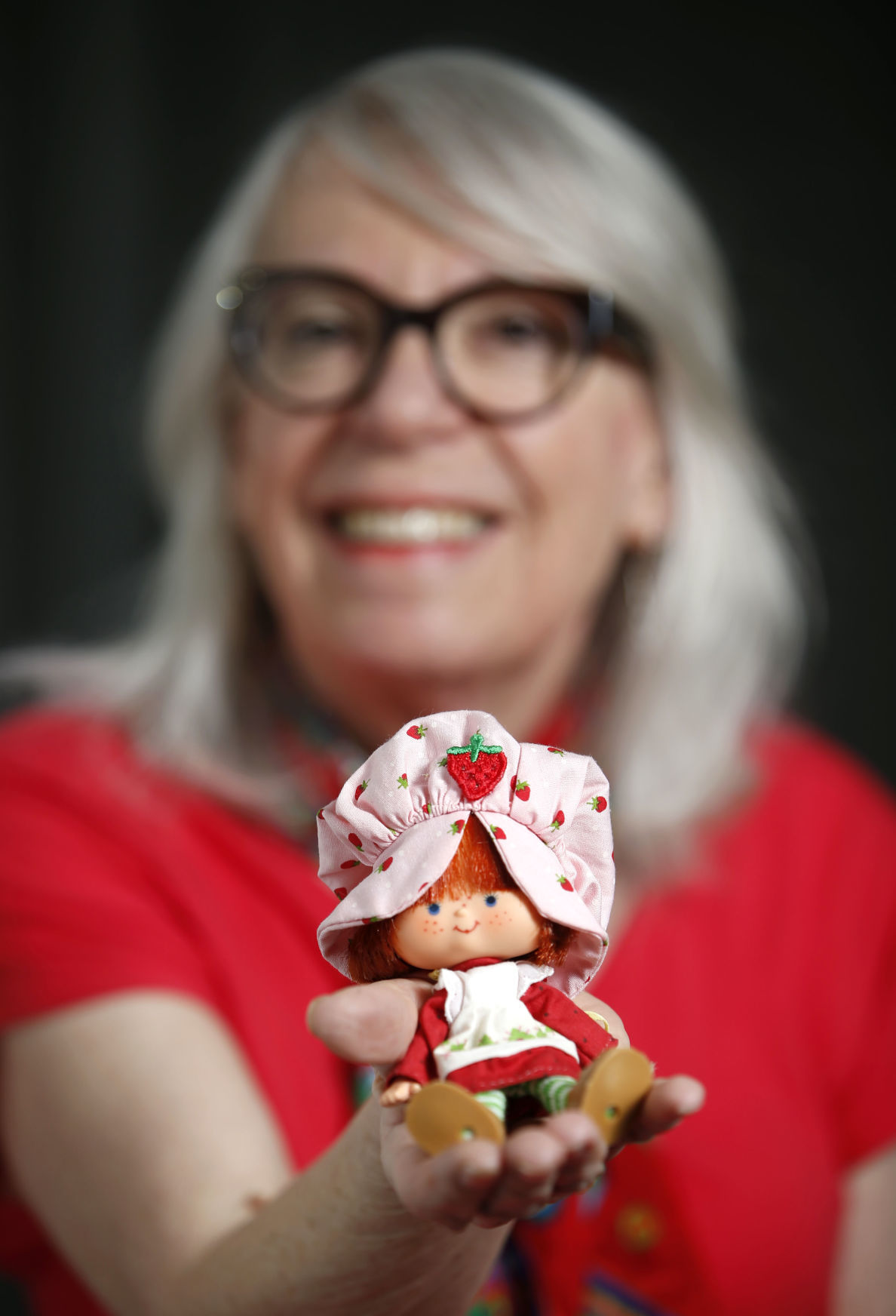 Strawberry Shortcake was introduced to the world in 1979. Artist and creator Muriel Fahrion revisited the character’s history during a recent interview at her Tulsa home. MATT BARNARD/Tulsa World 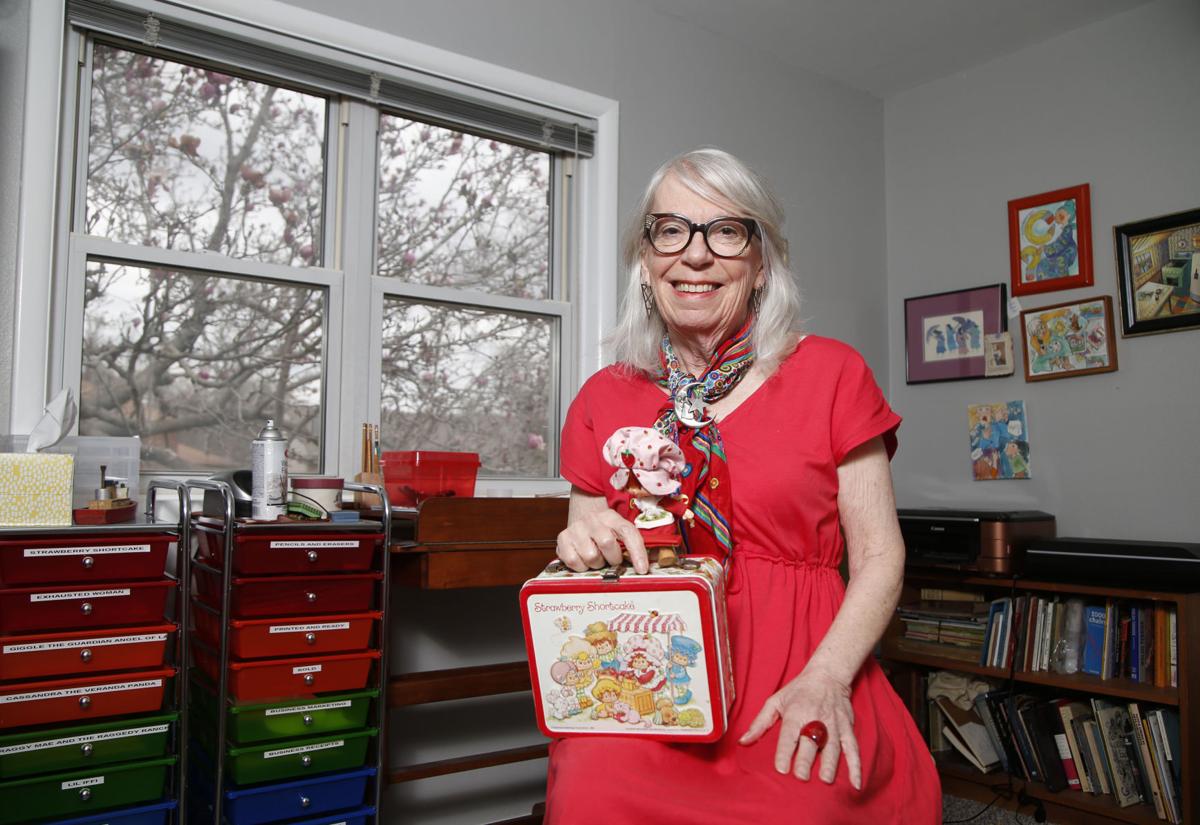 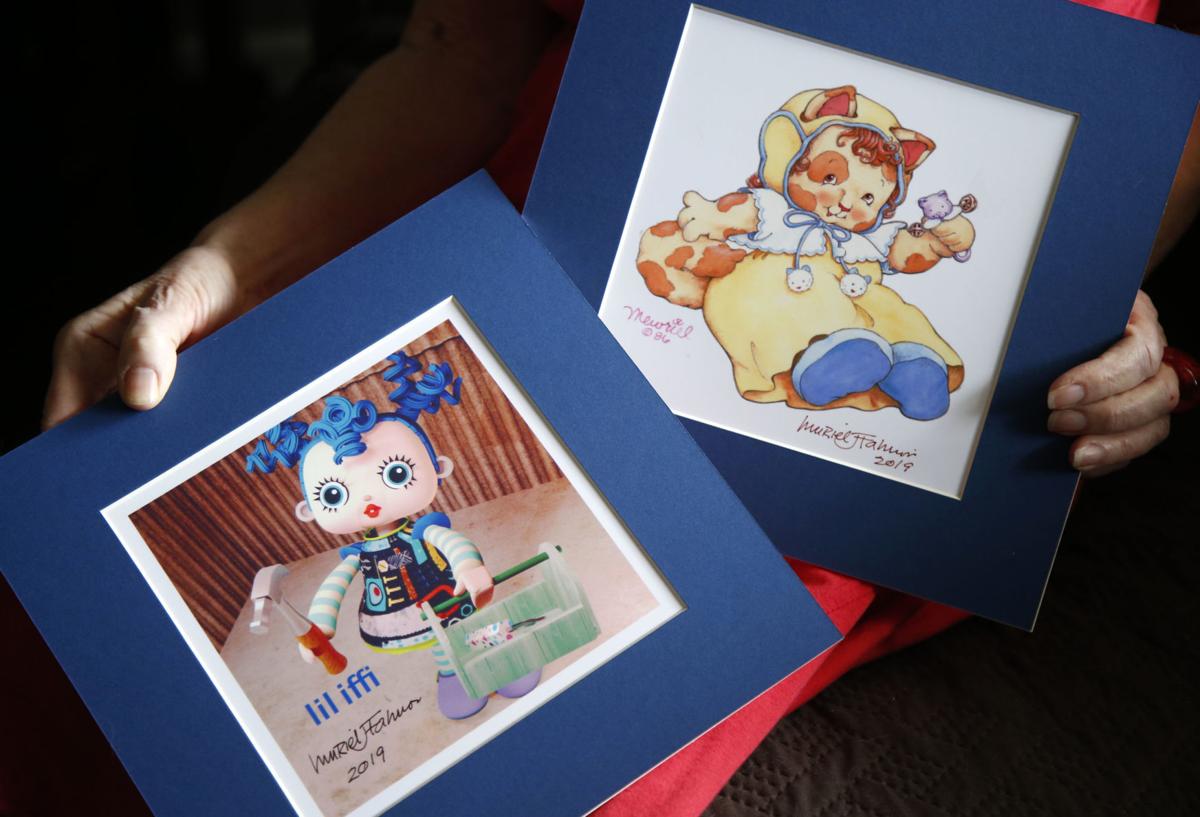 Once retired, Strawberry Shortcake creator and Tulsa resident Muriel Fahrion is active in the artist business again. She showed some of her newer character creations during a photo shoot and interview at her midtown Tulsa home. MATT BARNARD/Tulsa World 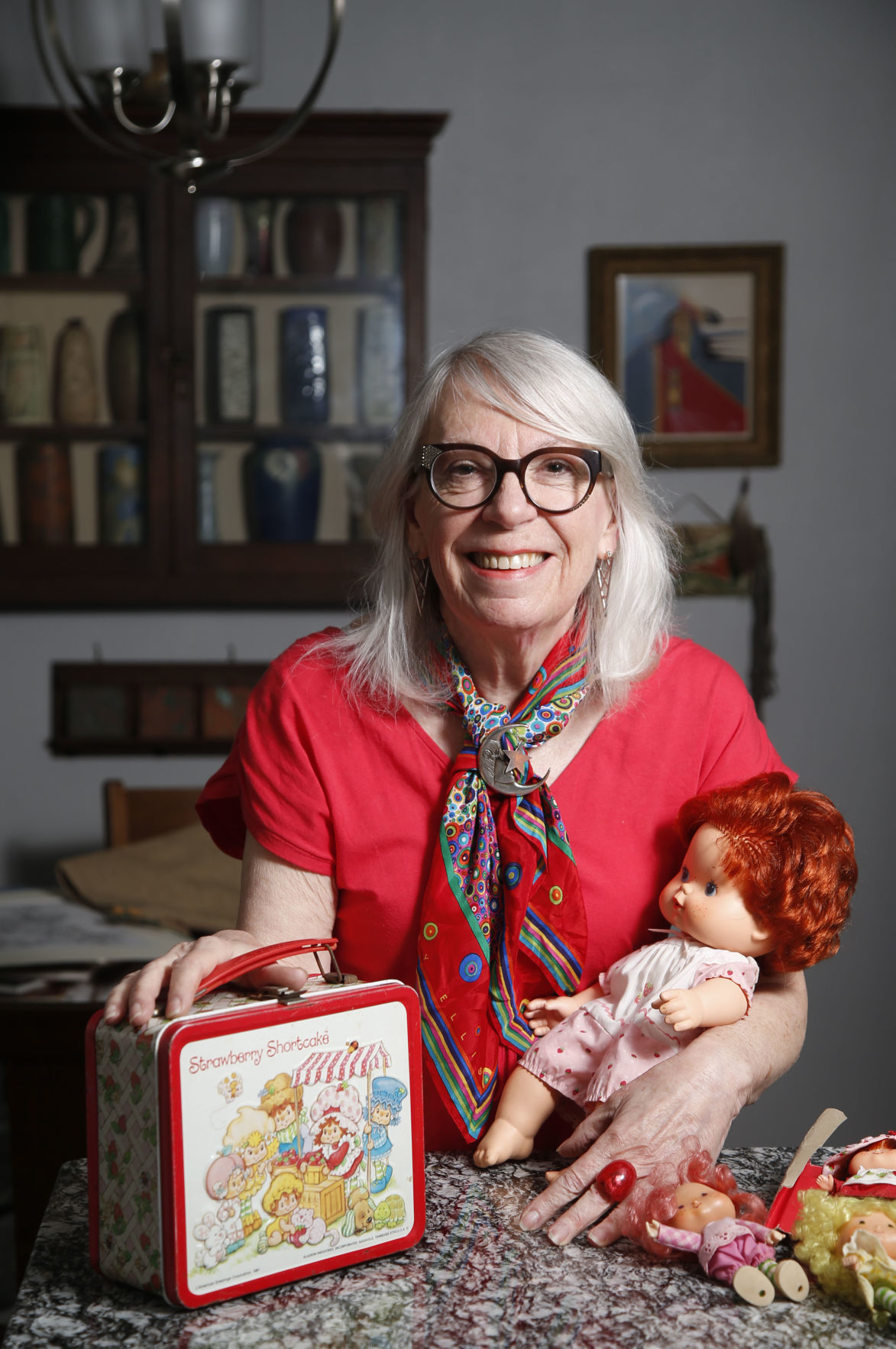 Strawberry Shortcake was introduced to the world in 1979. Artist and creator Muriel Fahrion revisited the character’s history during a recent interview at her Tulsa home. MATT BARNARD/Tulsa World

Once retired, Strawberry Shortcake creator and Tulsa resident Muriel Fahrion is active in the artist business again. She showed some of her newer character creations during a photo shoot and interview at her midtown Tulsa home. MATT BARNARD/Tulsa World

Strawberry Shortcake — the character, not the dessert — is 40.

Unveiled in 1979, Strawberry Shortcake has a local connection.

Artist Muriel Fahrion, who created Strawberry Shortcake, is an Ohio transplant who has lived in Tulsa for three years.

“I always thought what I did was insignificant compared to what doctors do or firemen or policemen or people that save your life, what they do,” Fahrion said during an interview at her midtown home.

“They had to get lost in something,” Fahrion said. “And they got lost in Strawberry Shortcake Land, and it was important.”

Fahrion’s place in history is bigger than Strawberry Shortcake. She also was part of the launch team for the Care Bears and the Get Along Gang. She continues to create characters because it’s impossible to keep them locked up in her brain. They. Must. Get. Out.

“I have all these ideas,” she said, providing background details on a stable of newer characters.

For those who require an introduction, Strawberry Shortcake became a pop culture and licensing phenomenon in the 1980s. She and pals like Lemon Meringue and Blueberry Muffin (Fahrion had a hand in creating the first 32 characters in the line) were everywhere. Dolls. Toys. Video game. Animated TV specials. You name it. Strawberry Shortcake even graduated to a feature film (“Strawberry Shortcake: The Sweet Dreams Movie”) in 2006.

The Strawberry Shortcake franchise has generated millions upon millions in profits.

Fahrion shares a nice home with two terriers, but, for clarity’s sake, it should be pointed out that she does not reside in a mansion in Tulsa’s most Grey Poupon neighborhood.

“I didn’t get (Strawberry Shortcake) royalties because I was work for hire,” she said. “Most artists are that way. Most commercial artists and illustrators work that way. Only the rare ones make the big time and get the royalties.”

A former employer in Oklahoma told her it was a shame she didn’t get a piece of the financial pie (or in this case, the shortcake). Her reply: If I had gotten royalties, you never would have met me.

“I would have been in Cleveland living on the Gold Coast,” she said. “That’s where I would have been. I wouldn’t have left Cleveland. In some ways, it’s not about money. I really like Oklahoma.”

Fahrion doesn’t want this to be — and it’s not — a story about how the creator of an iconic character is sour about missing out on a jackpot. Fellow Clevelanders Jerry Siegel and Joe Shuster created Superman, sold the rights to a comic publishing company for $130 and revisited the character’s ownership in litigation.

She’s happy with her lot in life (you can catch her in her kitchen dancing on Instagram because why shouldn’t people dance in the kitchen?), and she’s happy she wound up in Tulsa.

“I love the Tulsa arts community,” she said. “They are so welcoming and generous that I am amazed.”

If the question is what brought Fahrion to Tulsa, the easy answer is, a daughter lives here. But you have to go back a few addresses to get the full picture.

Fahrion was working for a boss she didn’t particularly like in Chicago and decided this: I’m going to like the people I work for, and I don’t care where it is.

That place became Oklahoma. Fahrion, who had never been to the state, moved to Norman in 1995 and took a position with United Design in Noble.

Fahrion and her husband, Michael, later relocated to Medicine Park, a resort community near Lawton. Michael was diagnosed with non-Hodgkin’s lymphoma. When his health began failing and the resort property became too difficult for him to navigate, a decision was made to move to Tulsa. She served as his caretaker until his death Oct. 16, 2018.

Once retired, Fahrion now is unretired. She said circumstances related to her husband’s health struggles “drained all the money we had. Everything. It’s gone. I’m not a starving artist. I still get social security. I still get some money. But it drained so much that now I am supporting myself again. I’m back in it.”

The story behind Strawberry Shortcake? Fahrion was working as a greeting card artist in Cleveland. An art director asked her to come up with a rag doll character and suggested a theme of daisies and strawberries and the color pink.

“And I ran with that,” Fahrion said. “I developed the look, and I also added Custard the Cat at that point.”

The initial plan was for Strawberry Patches (renamed Strawberry Shortcake because the name was already claimed) to appear on six greeting cards. A couple of years before that, toy developer and marketer Bernie Loomis saw potential in a little film called “Star Wars” and acquired licensing rights. Boom.

Loomis was on the hunt for a girl-centric property that might do well on toy shelves. Loomis was shown five properties, according to Fahrion, and the one he chose was Strawberry Shortcake.

Fahrion said licensers “had to pay money up front for this completely unknown thing except that Bernie Loomis was heading it up and they knew what he did with Star Wars, so they had some faith in that.”

Fahrion said she created the Get Along Gang with a writer, Tom Jacobs. “We both liked ‘Our Gang’ comedies, the Little Rascals, back in the day. They are all based on Little Rascals. Some people pick up on it. But it was just like, if they were animals, what would they be?” Fahrion said she worked on the first grouping, and the project was handed to another group for further development.

Fahrion recalled a 20-foot strawberry shortcake dessert being part of the festivities when the first year of the character was celebrated at Tavern on the Green in New York’s Central Park. Marvin Hamlisch was playing the piano. Just, wow.

But Fahrion said the biggest, craziest thrill came when she saw an animated version of Strawberry Shortcake skipping across a screen for the first time. “I had chills,” she said.

Fahrion has taken part in many interviews because of her shared history with you know who. She agreed to an interview for the British fashion and culture magazine Lula and found out that, oh by the way, the interviewer was going to be Kirsten Dunst. That Kirsten Dunst? Sure.

Said Fahrion, “I look at them and go, ‘Oh, you are Raspberry Tart’ or ‘You are Blueberry Muffin.’ Raspberry Tart is funny because it went international, the whole line. ... And when Raspberry Tart went over to England, they said, ‘We can’t call it Raspberry Tart here because that’s a prostitute here.’”

Asked if she brings up her Strawberry Shortcake past when talking with other artists, she said she plays this game: When there’s a lull in the conversation, she asks, “Would you like to know why I am famous but not rich?”

When they bite, she simply mentions Strawberry Shortcake, the Care Bears and the Get Along Gang. Said Fahrion, “They say, ‘No way!’ And I go, ‘Way!’ ”

Because of feedback, Fahrion knows Strawberry Shortcake is not an insignificant creation. She has a Patreon account. Patreon.com allows fans to connect and support their favorite creatives. Fahrion said one of her patrons contributes $55 per month. Why would someone do that? The answer was “you saved my childhood.” Fahrion said she loves to hear peoples’ stories. “Stories get to me,” she said.

Fahrion was asked to identify the best thing that has happened to her as a result of creating Strawberry Shortcake.

“I always think recently,” she said. “So, to me, it’s the people that had (Strawberry Shortcake) as kids, the adults now realize there is an artist behind it. To me, that is like, amazing, meeting the people. I’m a people person.”

Artist and Strawberry Shortcake creator Muriel Fahrion's operates Outta Thin Air Studio out of her Tulsa home. She can be reached at outtathinairstudio@gmail.com or on Facebook at facebook.com/outtathinair.

She continues to create newer characters. Among them: Giggle the Guardian Angel of Laughter, a 3D character named lil iffi, Empress Cassandra the Veranda Panda and Raggy Mae and the Raggedy Ranch.

Fahrion is of course aware that she she is a talented illustrator. "There are artists that are as good, if not better," she said. "But here’s the thing: What I am better at is these ideas. I’m conceptual and I have a visual memory. I thought for years that everyone had that, that if somebody says a word, then it’s in my head and I see a picture of it. And before I start drawing, I see the stuff in my head and then I draw it. I realize that is my leg up on a lot of things as I am able to do that."

Tulsa artist Muriel Fahrion, who ushered Strawberry Shortcake, the Care Bears and the Get Along Gang into 1980s pop culture, will be a guest of honor at the 17th annual '80s Prom. It's an 18-over event.

Here's how the origin story of the relationship between Fahrion and Ida Red:

After Fahrion's husband passed away, a sister came to visit and they checked out a few stores, including Ida Red.

"I started listening to his music," Fahrion said. "He's on my permanent playlist."

5 to find: See guest artist and hunt for these items at Ida Red on National Strawberry Shortcake Day