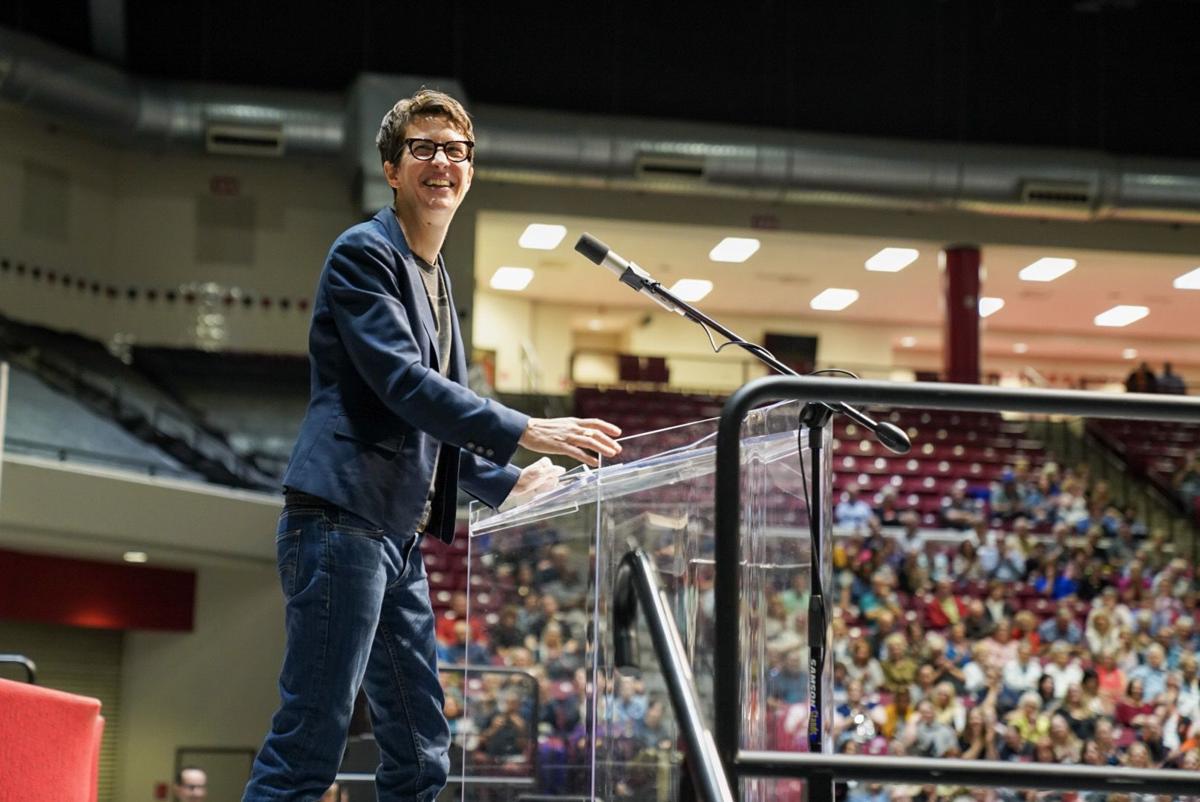 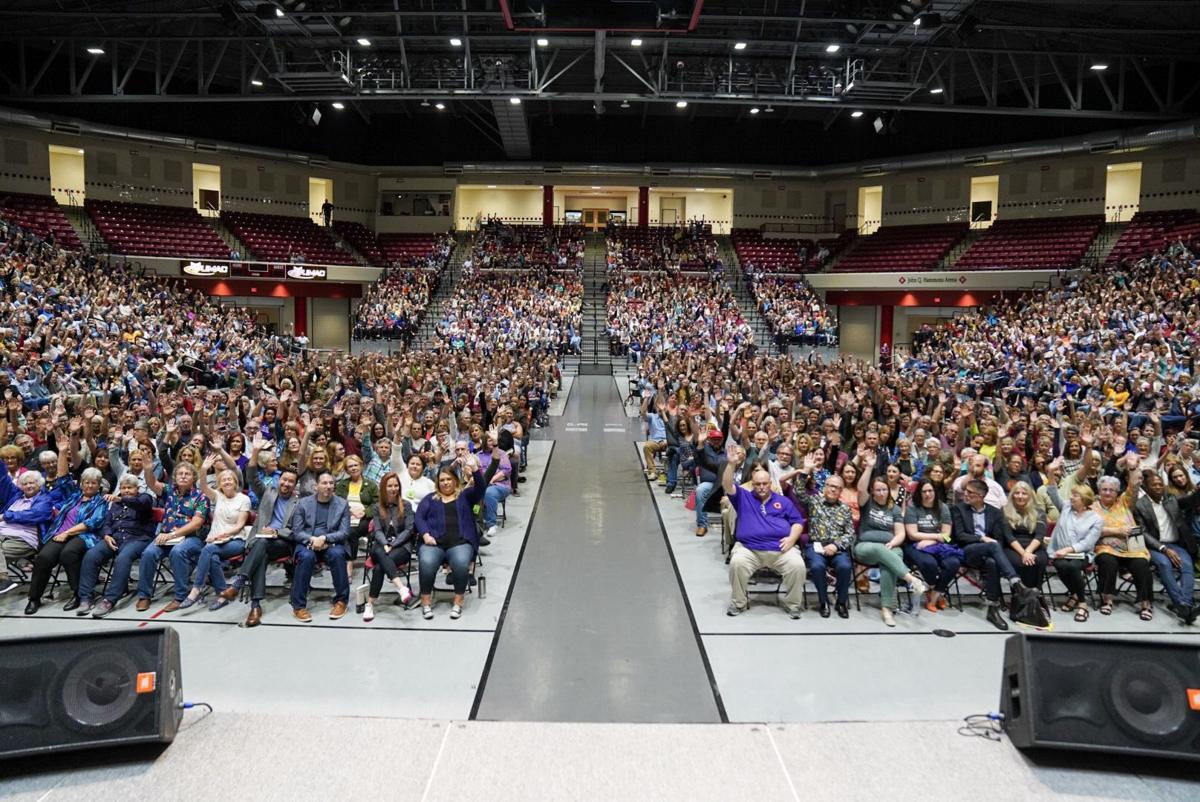 Members of the crowd raise their hands when asked by TV commentator Rachel Maddow how many have been in an Oklahoma earthquake. Maddow made an appearance Saturday in Tulsa to promote her new book. CHRISTOPHER CREESE/For the Tulsa World 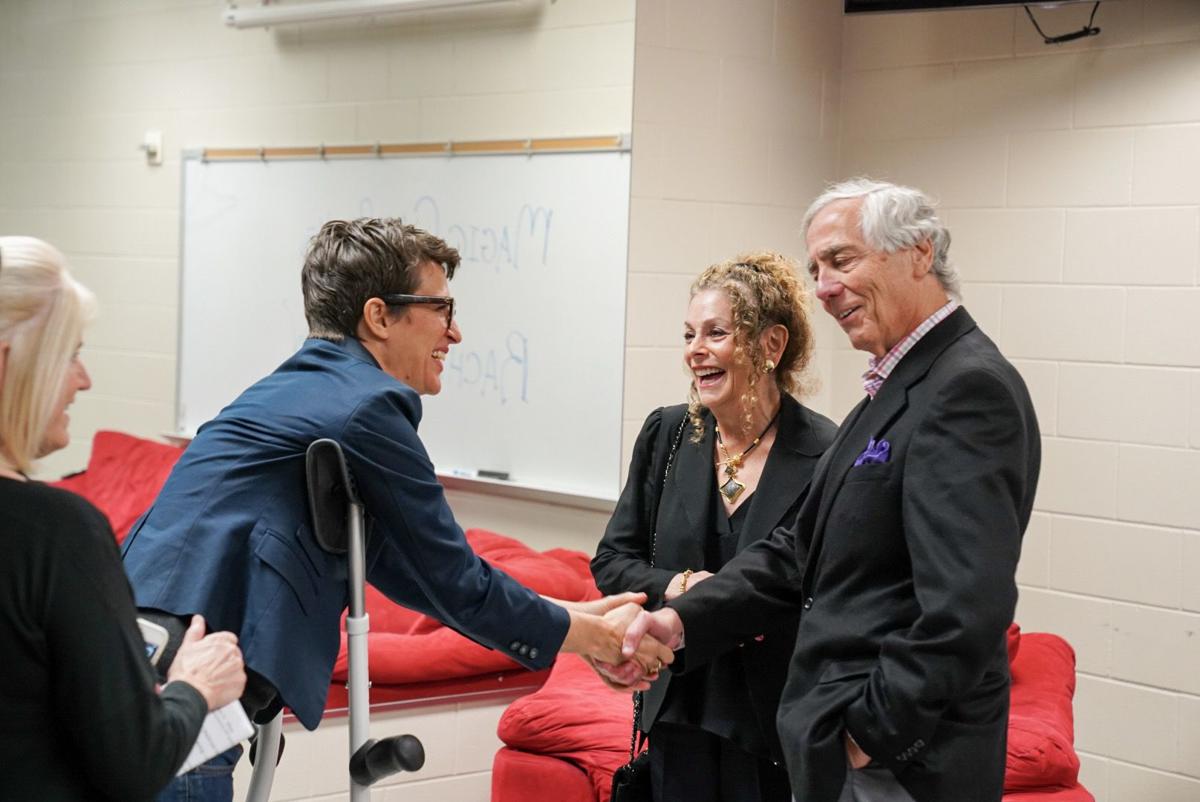 Members of the crowd raise their hands when asked by TV commentator Rachel Maddow how many have been in an Oklahoma earthquake. Maddow made an appearance Saturday in Tulsa to promote her new book. CHRISTOPHER CREESE/For the Tulsa World

Correction: This story originally incorrectly described Austin Holland's role at the Oklahoma Geological Survey. The story has been corrected.

The question “How many of you have been in an Oklahoma earthquake?” prompted MSNBC host Rachel Maddow to drop her jaw Saturday during an appearance in Tulsa at the Union Multipurpose Activity Center.

Nearly every hand of the 3,500-plus crowd flew into the air amid shouts of “Missouri, too” and “Arkansas, too.”

“Whoa, wait,” Maddow said summoning an official photographer to the stage to snap a shot. “I thought maybe five people would raise their hands.”

Maddow came to Tulsa as part of an eight-city tour to promote her latest book, “Blowout,” released last week. It follows the political impact, wealth, corruption and environmental costs of the oil and gas industry from Oklahoma to Russia to Equatorial Guinea.

Hours before the event, people were lined up for entry with some tailgating. It was a friendly crowd with some wearing T-shirts with slogans such as “Moscow Mitch,” “Nevertheless she persisted” and “We are the Squad.”

The crowd included Tulsa oilman, banker and philanthropist George Kaiser, who met with Maddow before the event.

When a group of women came into the arena donning red “Moms Demand Action” shirts, the crowd applauded.

Maddow, who has a broken foot, came to the stage, she received a standing ovation.

A significant portion of her book focuses on how Oklahoma energy companies and lawmakers reacted when faced with historic earthquakes and dwindling state finances.

“I’m really hopeful because of Oklahoma,” Maddow said. “You guys are the happy trail in this book.”

Maddow said she didn’t set out to write about oil and gas.

Two questions intrigued her. One was why Russia would so brazenly meddle in an American election. Another was to add meaningful analysis to the threat of democracy to authoritarianism.

It was a deposition of former Oklahoma seismologist Austin Holland that got Maddow’s attention.

Holland was the lead seismologist for the Oklahoma Geological Survey and found links between hydraulic fracking for oil and earthquakes. He testified being pressured to alter his findings and eventually left the job due to that constant threat.

“Austin Holland is a hero of the book,” Maddow said. “There is not a political bone in his body … He is not someone who came in looking for a fight, but he stood up for his work and the science. That is a noble thing.”

That led Maddow on a journey to examine how the oil and gas industry weaves its influence throughout the world. In many places — such as Russia, Ukraine and the Middle East — it leads to corruption or instability.

“Where oil revenue flows, governments tend to suffer,” she said.

Then, Maddow comes back to Oklahoma. She points to the 2018 teacher walkout that led to revenue measures including a gross production tax from 2% to 5%.

“You guys turned on your democracy a little bit, and you made change,” Maddow said. “In this red state with a history of oil and gas, when push came to shove, you filled the Capitol and changed the tax structure on oil and gas.

“The committed, civic-minded people from all political stripes came together.”

She noted that Oklahoma didn’t politically turn blue or alter policies to become an environmental model. But democracy’s strength was shown in how people came together for a common purpose.

“It’s ultimately a can-do story, and part of it is the big-mindedness of school teachers and activists in our country and in this state who made it happen,” Maddow said.

The book was written before the impeachment investigation of President Trump was launched. A reading indicated some players in the ongoing impeachment were involved in Russian oil and gas industries.

“It feels like it’s not shutting off,” Maddow said.

During questions from the audience, Maddow spoke about the importance of local journalism.

Maddow mentioned how the recent trend of altering language can be a threat.

In 2015, the term “fake news” was used to describe how Russian bots and social media trolls made up stories to look like legitimate stories. Then, Trump flipped it to use as a descriptor of journalists or stories he didn’t like.

“That is now happening with the word ‘corruption,’” she said. “Trump used it about 27 times in one press conference. ... He makes the word no longer recognizable, and we won’t be able to use it by the end of the week.

“That loss of language hurts, and we need to be aware of it. Having a well-educated populace with real journalists who do real work is powerful.”

Maddow said the book is not investigative but based on available public records and previously reported stories. It brings all these together under one theme.

But she adds a little of her trademark dry wit.

“I find it funny the name is Chesapeake Energy. It’s an Oklahoma company. It sounds like a cool Eastern golf club,” Maddow said.