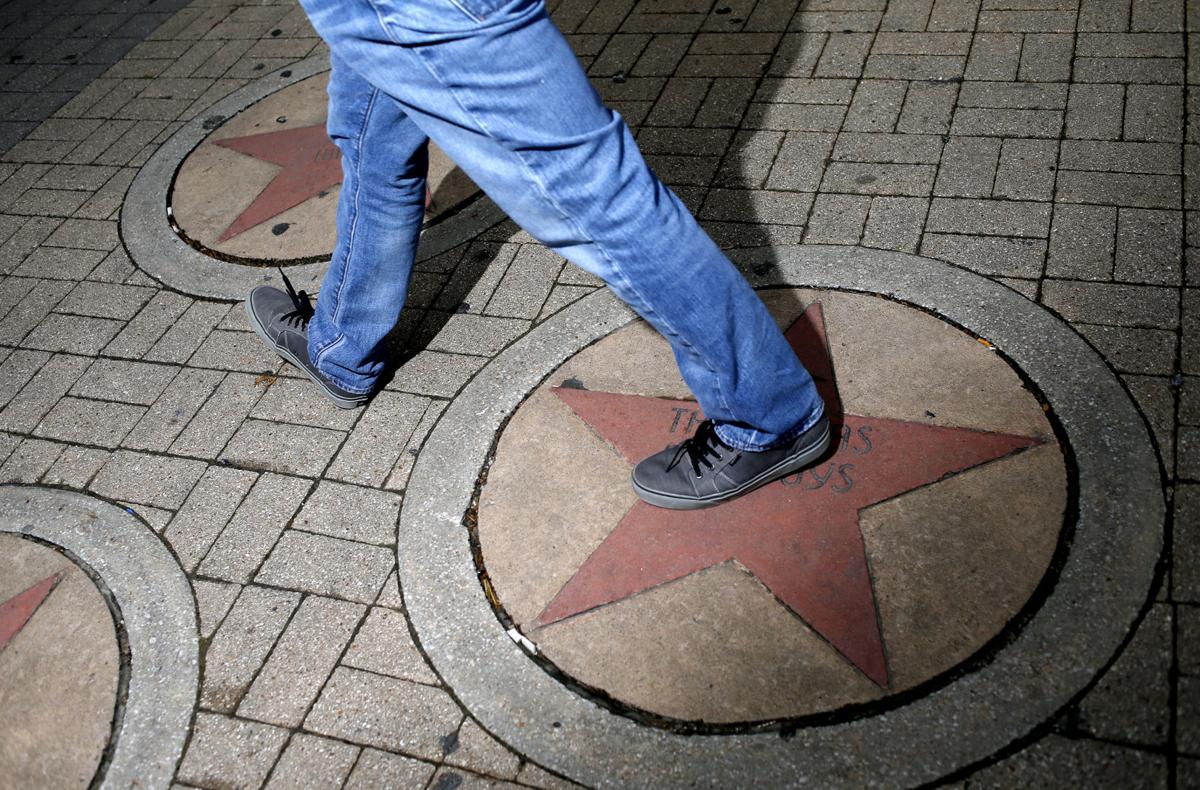 Even if you don’t make it inside to check out historic Cain’s Ballroom, you can search the “Walk of Fame” sidewalk stars for names you might recognize. JOHN CLANTON/Tulsa World file 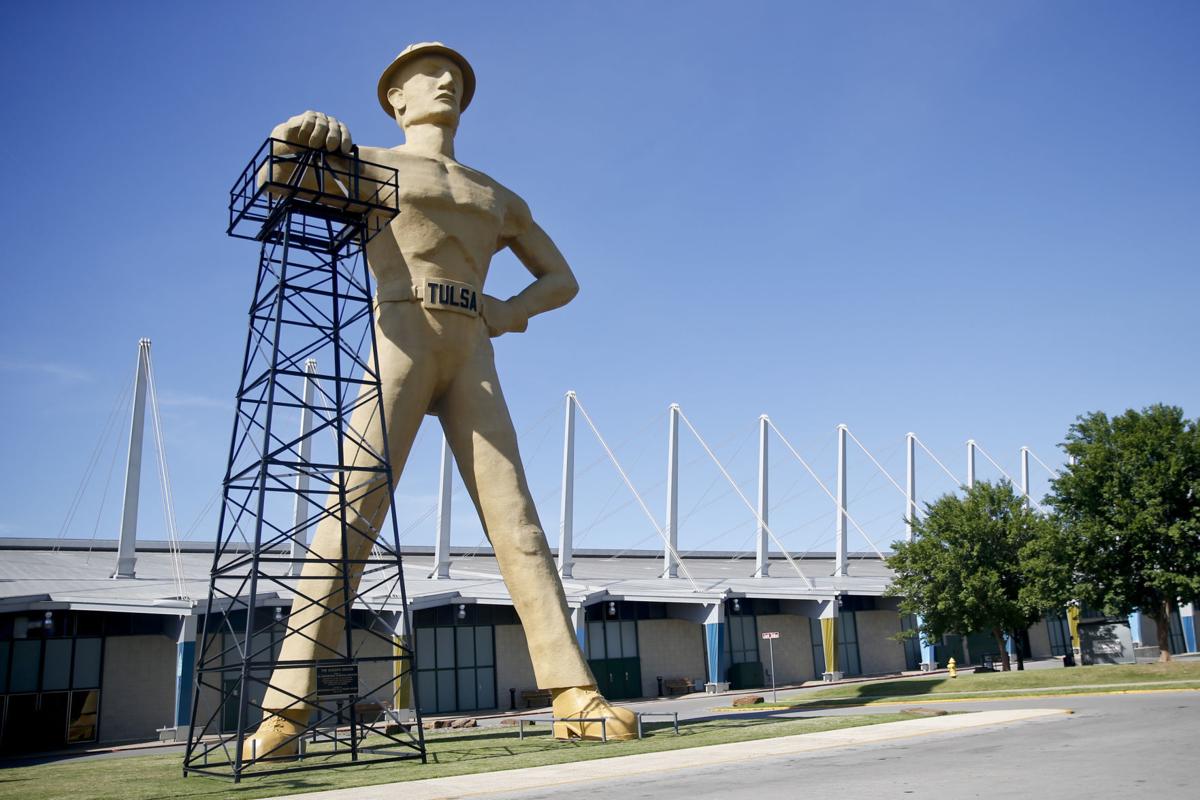 NCAA Tournament qualifiers are bringing baskeball teams to Tulsa this week. None will have a post player taller than Tulsa’s Golden Driller, who is available for selfies. Ian Maule/Tulsa World 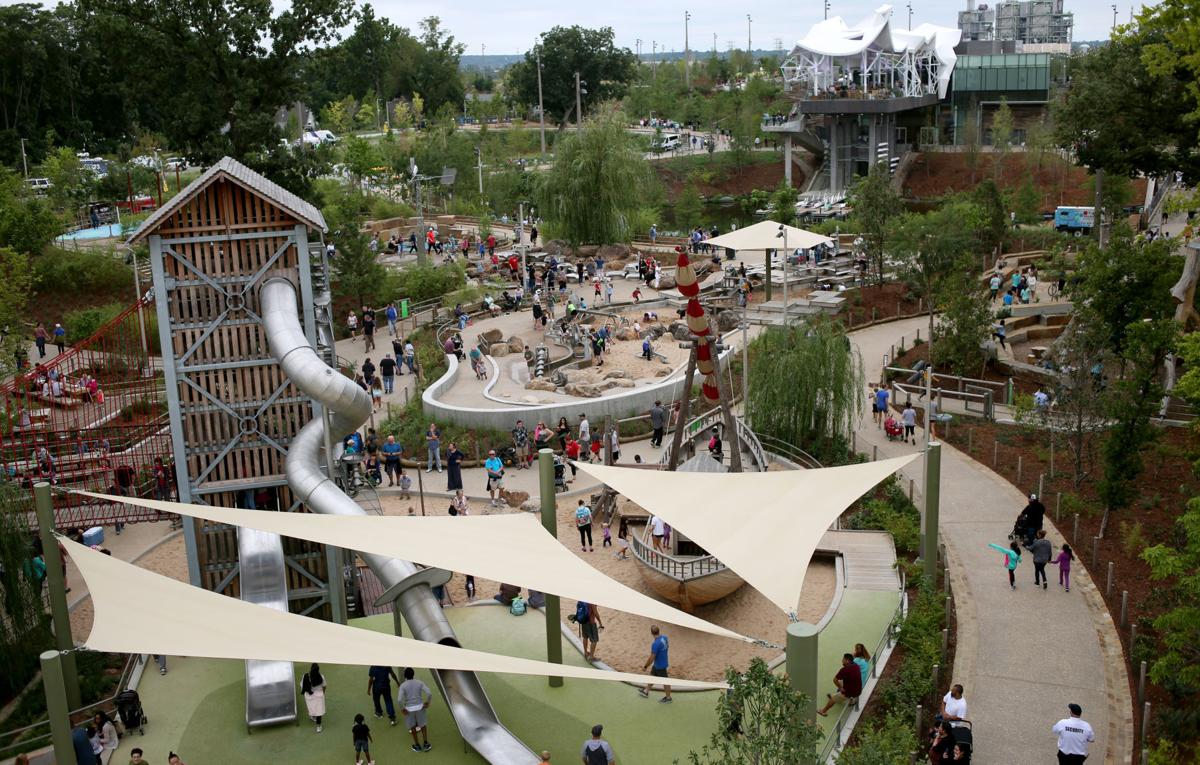 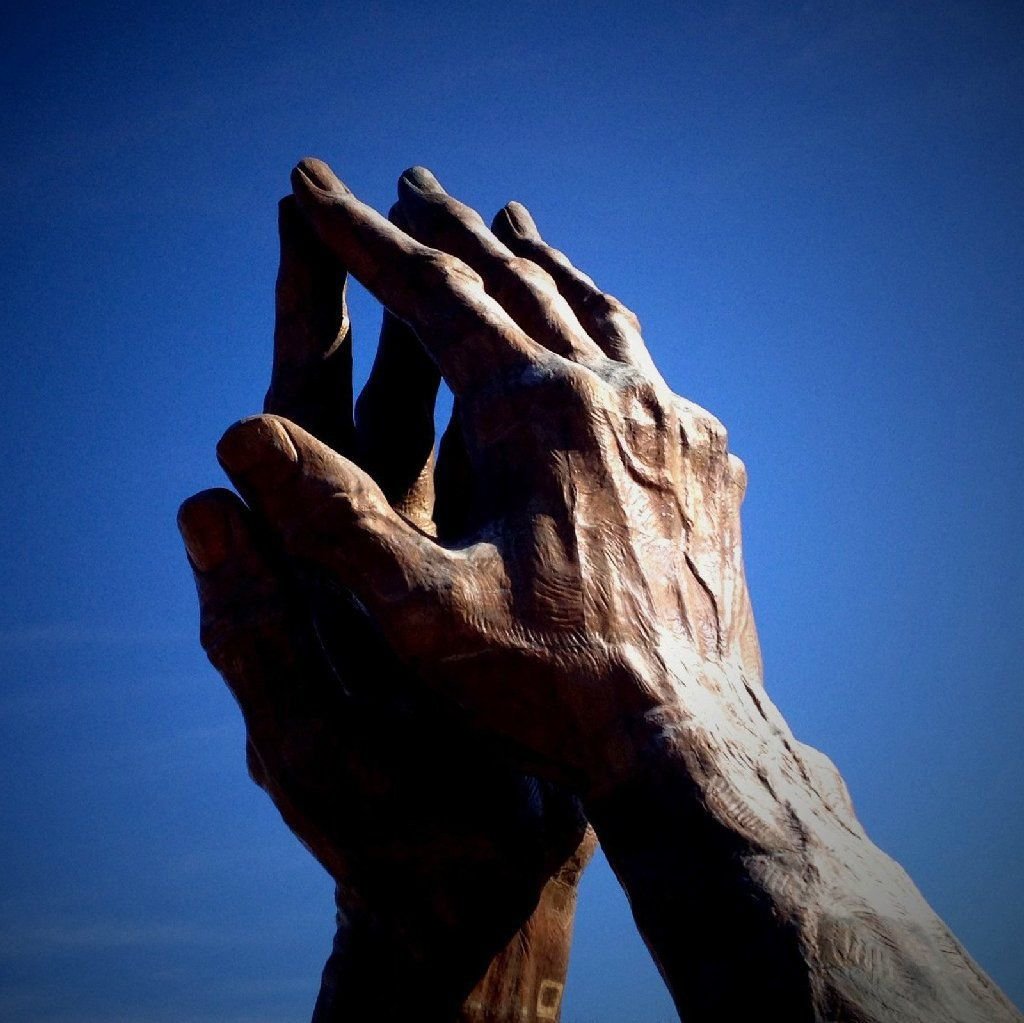 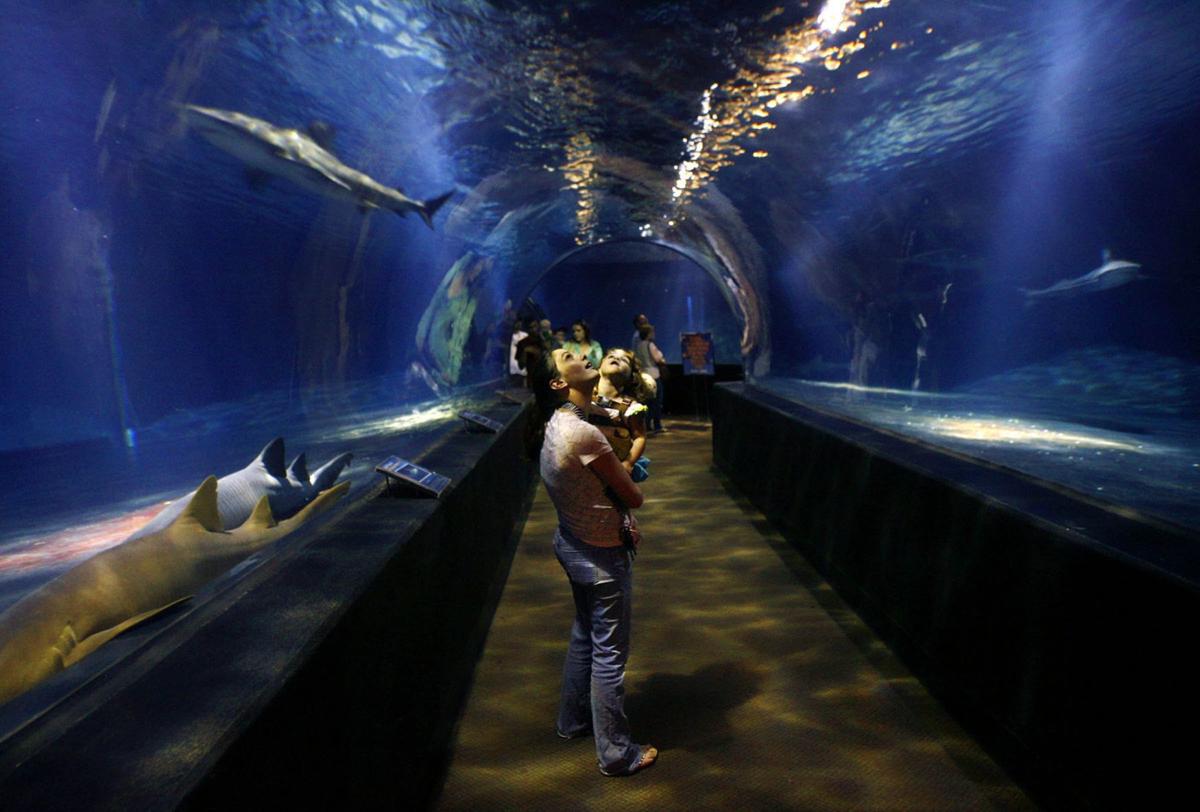 Visitors can walk through the shark exhibit inside the Oklahoma Aquarium in Jenks. MATT BARNARD/Tulsa World file 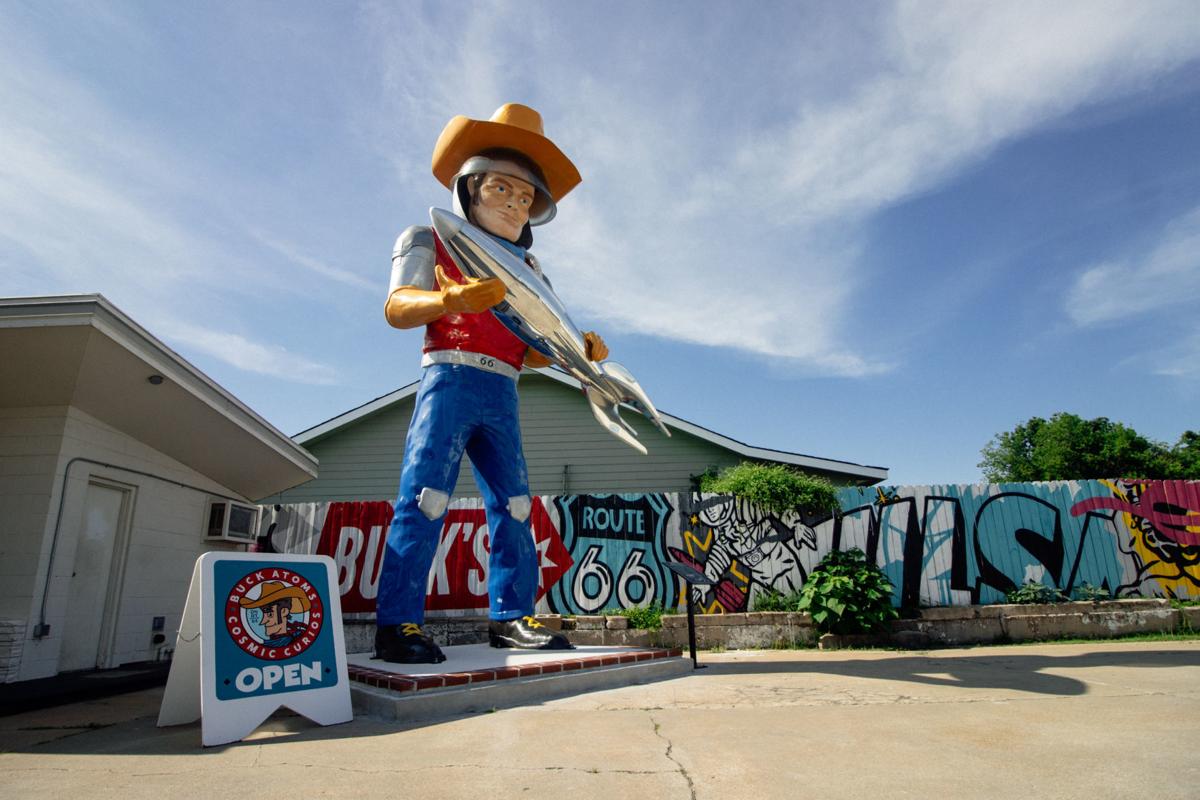 Even if you don’t make it inside to check out historic Cain’s Ballroom, you can search the “Walk of Fame” sidewalk stars for names you might recognize. JOHN CLANTON/Tulsa World file

NCAA Tournament qualifiers are bringing baskeball teams to Tulsa this week. None will have a post player taller than Tulsa’s Golden Driller, who is available for selfies. Ian Maule/Tulsa World

Visitors can walk through the shark exhibit inside the Oklahoma Aquarium in Jenks. MATT BARNARD/Tulsa World file

Thousands of visitors will flock to downtown Tulsa this weekend, some who may not know much about the city.

Here are some of the highlights we love to share with visitors, with a social distancing and safety slant in mind.

Cain’s Ballroom, 423 N. Main St., is Tulsa’s most tradition-rich music venue. It once was known as the Carnegie Hall of Western swing music because of its association with Bob Wills. You can’t help but soak up the vibe if you go inside.

There are no shows this weekend, but you can stop by and check out the names on a “Walk of Fame” outside the venue. Pretty much everybody who is anybody has played Cain’s Ballroom. Sid Vicious of the Sex Pistols punched a hole in a dressing room wall there in 1978.

At 60 feet tall and weighing in at 30 tons, when it was constructed it was the largest cast bronze sculpture in the world. The hands can be found at the entrance to Oral Roberts University, 7777 S. Lewis Ave., where they have been greeting visitors since 1991.

Tulsa author S.E. Hinton wrote “The Outsiders” when she was a teen at Will Rogers High School. The novel was the source material for a filmed-in-Tulsa movie that was released in 1983 and helped launch the careers of Ralph Macchio, Rob Lowe, Emilio Estevez, C. Thomas Howell, Patrick Swayze and Tom Cruise.

The Tulsa home the Curtis brothers lived in during the making of the movie was almost lost to the ages, but it was salvaged by “The Outsiders” fan and House of Pain rapper Danny O’Connor. The Outsiders House, 731 N. St. Louis Ave., is a now a museum.

As of now, tours of the house are available by appointment only. Due to our current restrictions, there are no walk-up ticket sales. For more information, go to theoutsidershouse.com.

But if you are at the house on nontour days or after hours, feel free to take pictures of the exterior of the house, including the front porch. They ask that you do not trespass on the museum property beyond that, be respectful to the neighbors and close the gate as you leave.

The king of all big screens in this city can be found at the Admiral Twin Drive-In, 7355 E. Easton St. With two outdoor screens that are nine stories tall, the Admiral Twin allows visitors to embrace the “throwback” movie experience of sitting in your vehicle (or in lawn chairs, if you bring ‘em) to catch a movie.

This is another filming location of “The Outsiders.” This weekend, “Shrek” and “Invisible Man” are playing. Check out admiraltwindrivein.com.

The best new attraction in the United States? It’s in Tulsa.

Gathering Place is a 66.5-acre green space and park along Riverside Drive.

Last year, it was announced that the $465 million park had been voted the best new attraction in the U.S., per a USA Today 10 Best Reader’s Choice contest.

Most of the park’s attractions have reopened following the COVID-19 shutdown.

Tulsa is, of course, on historic Route 66, alias the “Mother Road.” Route 66 eye candy is all along the path, including the quirky cool Blue Whale in Catoosa.

A newer Route 66 destination is Mother Road Market, 1124 S. Lewis Ave., where a 9-hole mini golf course is housed on the back patio. Each hole highlights a different Route 66 landmark. Food from inside can be ordered and enjoyed on the spacious patio while restrictions are still in place.

Buck Atom’s Cosmic Curios on 66 is a fun place to go and take your photo with the giant Buck Atom outside, 1347 E. 11th St. For more, go online to buckatomson66.com.

Metropolitan downtown areas tend to be concrete kingdoms. You can find an exception in the Tulsa Arts District. Guthrie Green, 111 E. Reconciliation Way, is — truth in advertising — green, and it occupies a square block of the district.

Guthrie Green was built by the George Kaiser Family Foundation and is a private park open to the community. It’s a great place to chill.

The Golden Driller is a 75-foot statue of an oil worker who stands tall above the Tulsa County Fairgrounds, alias Expo Square, 4145 E. 21st St. The statue pays tribute to Tulsa’s “Oil Capital of the World” roots. It’s OK to stand by his feet and take a selfie.

There’s even a Josh’s Sno Cone Shack to help you beat the heat.

If someone in your travel party has shopping fever while in town, there are many cures, including Utica Square, Tulsa Hills, shops along Brookside (Peoria Avenue) and Cherry Street (15th Street), The Farm, The Boxyard and the shops in and around Woodland Hills Mall and Promenade mall. Bass Pro Shops has a location in nearby Broken Arrow.

Some attractions in the Tulsa Arts District have already been listed, but the revitalization of Tulsa’s downtown is more apparent in the Arts District than anywhere else. Go exploring on turf that will, in the future, be home to the Oklahoma Museum of Popular Culture.

Tulsa’s Greenwood District is steeped in history as the home of the former “Black Wall Street” and is home to ONEOK Field (where the Tulsa Drillers baseball team plays) and the John Hope Franklin Reconciliation Park. The latter is a memorial to the 1921 Tulsa Race Massacre and tells the story of African-Americans’ role in building Oklahoma. It is also home to the Greenwood Cultural Center, which works to preserve and document the historic district.

Check out the critters at the Tulsa Zoo, 6421 E. 36th St. North, and the Oklahoma Aquarium, 300 Aquarium Drive in Jenks, which features a walk-through shark tank.

Check out a casino

All locations have take precautions for reopening following the COVID-19 shutdown. Relax, gamble, party, dine or just enjoy yourself at these locations.