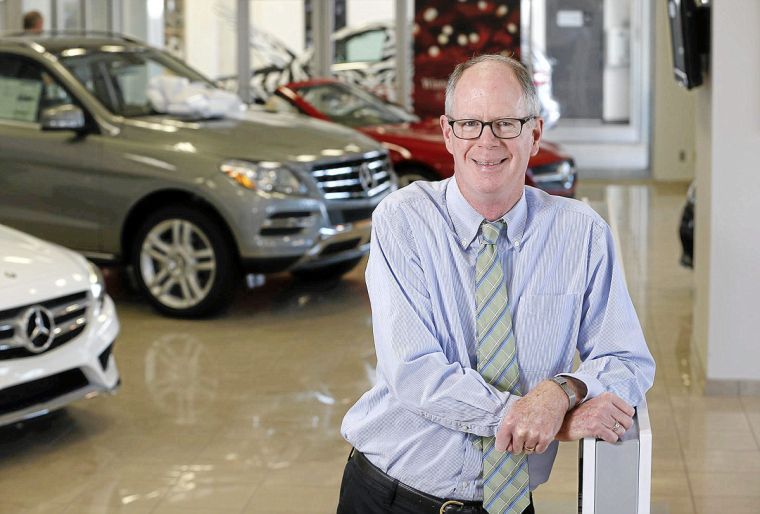 Tim Sullivan, the corporate chaplain at Jackie Cooper Imports, in one of the company's showrooms in Tulsa. As a corporate chaplain, Sullivan is part of a small but growing group of ministers hired by companies to meet their employees' spiritual needs. MATT BARNARD/Tulsa World 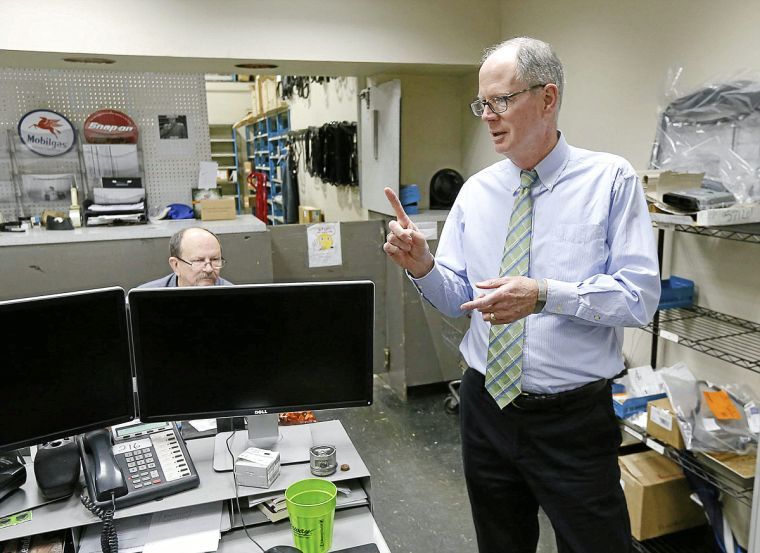 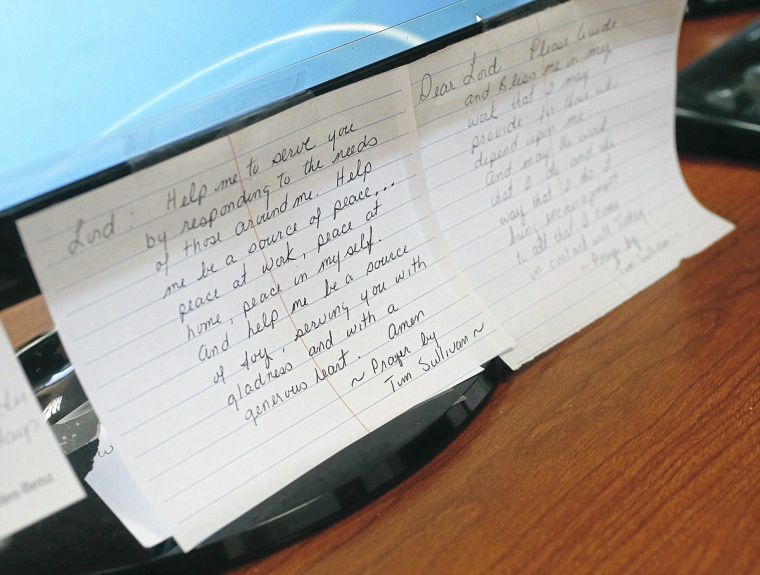 A prayer from Tim Sullivan, the corporate chaplain at Jackie Cooper Imports, is taped to another employee's computer in Tulsa, Okla. on Tuesday, December 9, 2014. MATT BARNARD/Tulsa World

Tim Sullivan, the corporate chaplain at Jackie Cooper Imports, in one of the company's showrooms in Tulsa. As a corporate chaplain, Sullivan is part of a small but growing group of ministers hired by companies to meet their employees' spiritual needs. MATT BARNARD/Tulsa World

A prayer from Tim Sullivan, the corporate chaplain at Jackie Cooper Imports, is taped to another employee's computer in Tulsa, Okla. on Tuesday, December 9, 2014. MATT BARNARD/Tulsa World

He doesn’t know if he would have made it through the crisis without the help of Tim Sullivan, the dealership’s chaplain.

“It was an extremely difficult time in my life,” Peek said. “(Sullivan) was there. He got me through it.

“And he’s still getting me through it.”

Sullivan is a rarity in the car dealership industry — a chaplain who is on the payroll.

On just about any weekday morning, he can be found walking the halls and showrooms of Jackie Cooper Imports, greeting his co-workers and asking about their families.

That’s not incidental to his job, that is his job.

He also gets up in the middle of the night to comfort employees who have just lost a loved one in a car accident, counsels couples whose marriage is unraveling and visits employees who are hospitalized.

As a corporate chaplain, Sullivan is part of a small but growing group of ministers hired by companies to meet their employees’ spiritual needs. The attorney and former executive director of Catholic Charities in Tulsa is the dealership’s first chaplain.

“We’re trying to create some balance in life,” said Kach, who likened the chaplaincy program to other employee benefits that businesses provide, like medical and dental plans, exercise programs and financial guidance.

“We thought maybe the next step should be to help people spiritually,” said Kach, who started the dealership in 1991. “Everybody has problems in life, deaths in the family, problems with their children, their marriage.”

Changes in American society like the high divorce rate are creating problems for people and affecting their job performance, Kach said. Divorce affects people emotionally and affects their children and their finances.

Kach said that when Sullivan began, some employees questioned the value of a chaplaincy program. Yet Sullivan’s Catholicism has never been an issue.

“People who had never thought of talking to him now see him as part of the team,” Kach said. “It’s been a nice fit for us. We made it really clear from the beginning that his job is not to try to convert people but just to be there for them when they need it.”

Sullivan said that companies who hire chaplains are trying to create a different culture, a place where people care about each other in intentional ways. He works about 20 hours a week at the dealership. In addition to that job, he speaks and conducts spiritual retreats.

Mark Lorentz, parts and service director, said having Sullivan on staff has “really helped out a lot.”

“As managers, people come to us with personal issues, marriage issues, financial issues,” Lorentz said. “For me, personally, I’m not trained in this area. ... this gives us a resource.”

Art Stricklin, director of communications for Marketplace Chaplains USA, the nation’s largest provider of workplace chaplains, said that corporate chaplaincy is “a growing trend. We’ve tripled our companies since 2001.”

Marketplace now has 2,890 chaplains and counselors on its payroll, from 94 denominations, serving nearly a half a million people in more than 1,000 cities, including Tulsa.

Bloomberg Businessweek reported recently that more than 1,000 companies in the U.S. and Canada have corporate chaplains, some hired by the company, others from chaplaincy agencies like Marketplace.

Both ways of doing it have their proponents. Strickland said that employees who go to agency-provided chaplains have more privacy and less worry about their issues getting back to their employers.

Kach said that a chaplain on the payroll has a permanent presence in the business, develops relationships and is always accessible.

“If you go through an agency, it’s not the same,” he said.

Bloomberg Businessweek cited a Princeton University Faith & Work Initiative ongoing study that said employees are far more likely to use the services of a workplace chaplain than other mental-health benefits.

Tulsa’s Parker Drilling was a pioneer in the corporate chaplaincy world. The late Rev. Wishard Lemons was a chaplain for Parker Drilling for nearly two decades, starting in 1974.

Corporate giant Tyson Foods in Arkansas employs more than 115 chaplains. Tyson Chairman John Tyson started the program in 2000 “as a reflection of our core values ... a faith-friendly company striving to care for each other,” according to a statement on the corporate website.

Who is Tim Sullivan?

“I got too smart for God and pushed religion out of my life” during college and law school at Notre Dame, he said.

For 18 years, he practiced law in Tulsa.

On July 2, 1988, he said, he had a life-changing encounter with God at a marriage retreat.

“I experienced God’s presence penetrating every cell of my being. The scriptures came alive to me in a whole new way.”

He left his law practice in 1994 to become the family life director for the Diocese of Tulsa.

In 2000, he completed a three-year program and was ordained a deacon in the Roman Catholic Church, authorized by the church to preach, preside over weddings and funerals and do all other ministry except serve Communion and hear confessions.

He and his wife, Connie, returned to Tulsa a year ago, where five of their six children now live. They have 11 grandchildren and two on the way.