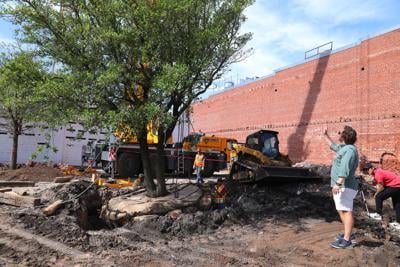 It has been a long time coming for Elliot Nelson to have a beer garden for his downtown McNellie’s location, 409 E. First St.

To be exact, it has been 17 years that Nelson has wanted to put in a beer garden there. The location came up for sale a few months ago and now Tulsa will have a beer garden with a great view of downtown. And to make it even better, there will be shade.

Two live oak trees were installed for instant shade with the larger one being 30 feet high and weighing 45,000 pounds. It took around four hours for crews to install the trees on Tuesday using a crane and tractors. The trees came up from Texas near the Oklahoma border.

“The day we open this beer garden we will have big shade trees and you can come and enjoy a beer under the shade,” said Nelson, founder of McNellie’s.

“Instead of waiting on some trees to grow 20 years, we can get there a little quicker.”

Nelson plans to cut a hole in the wall of McNellie’s to give access to the beer garden and use the kitchen.

“At some point, we are going to take the existing building here that is adjacent to the beer garden and build an outdoor bar, but that project has been delayed a little, just because of COVID and other things,” Nelson said. “So we are going to slowly ease into this.”

McNellie’s turned 16 in March this year and Nelson has talked about building a beer garden since they were under construction in 2003.

“To be perfectly honest, I had given up on it. It was one of those things that was never going to happen,” Nelson said.

The beer garden will open sometime this summer.

“Obviously, the timing to have some outdoor seating this summer given the current distancing and other things is going to be great,” he said.