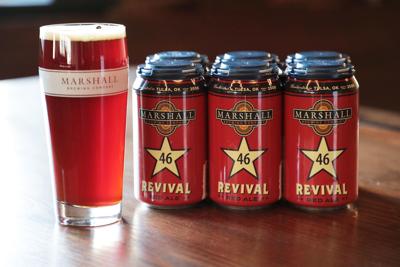 Revival Red Ale will be widely available across Oklahoma in 6-pack cans and on draft where craft beers are sold.

Canning beer has become an emphasis for Marshall Brewing since leading off with their first can release in October of 2018, This Land Lager. "Craft cans offer the beer drinker flexibility and portability. Oklahoma has many beautiful recreational areas to explore. Whether hiking in the Kiamichi Mountains, kayaking on Grand Lake, or hanging out on your favorite patio, Revival Red Ale in a can is the perfect companion to celebrate spring outdoors," explains Wes Alexander, director of marketing and sales, Marshall Brewing.

Revival Red Ale tells the story of Oklahoma's first flag as we were the 46th state admitted to the Union. The ruby-hued ale is brewed with a balanced blend of six malts that give the beer a medium body and a savory malt base. Chinook and Cascade hops shape a wonderful citrusy hop profile and the addition of Cascade and Centennial dry-hops enhances the fruity aroma. Revival Red Ale is 6.5% alcohol by volume.