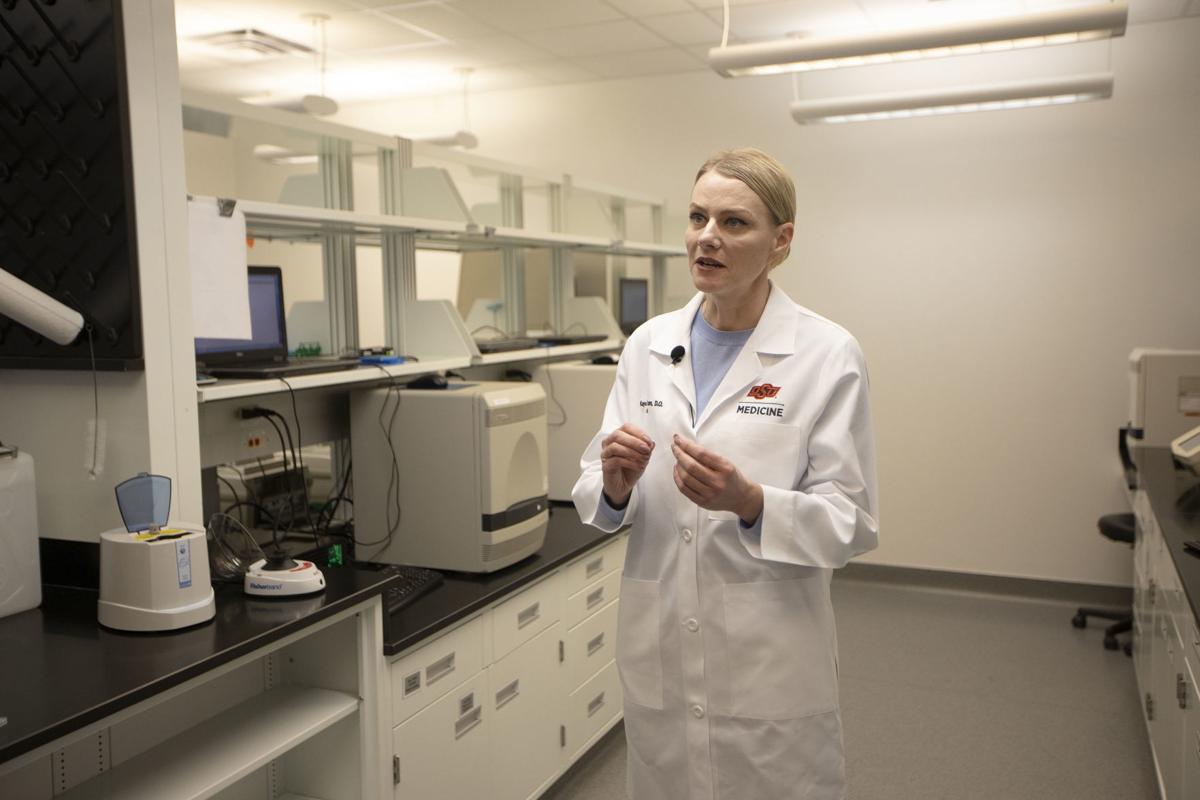 Dr. Kayse Shrum talks with the media about the expanded COVID-19 testing that began at the Oklahoma Animal Disease Diagnostic Laboratory on the Oklahoma State University campus in April. EVAN LEWIS/For the Tulsa World 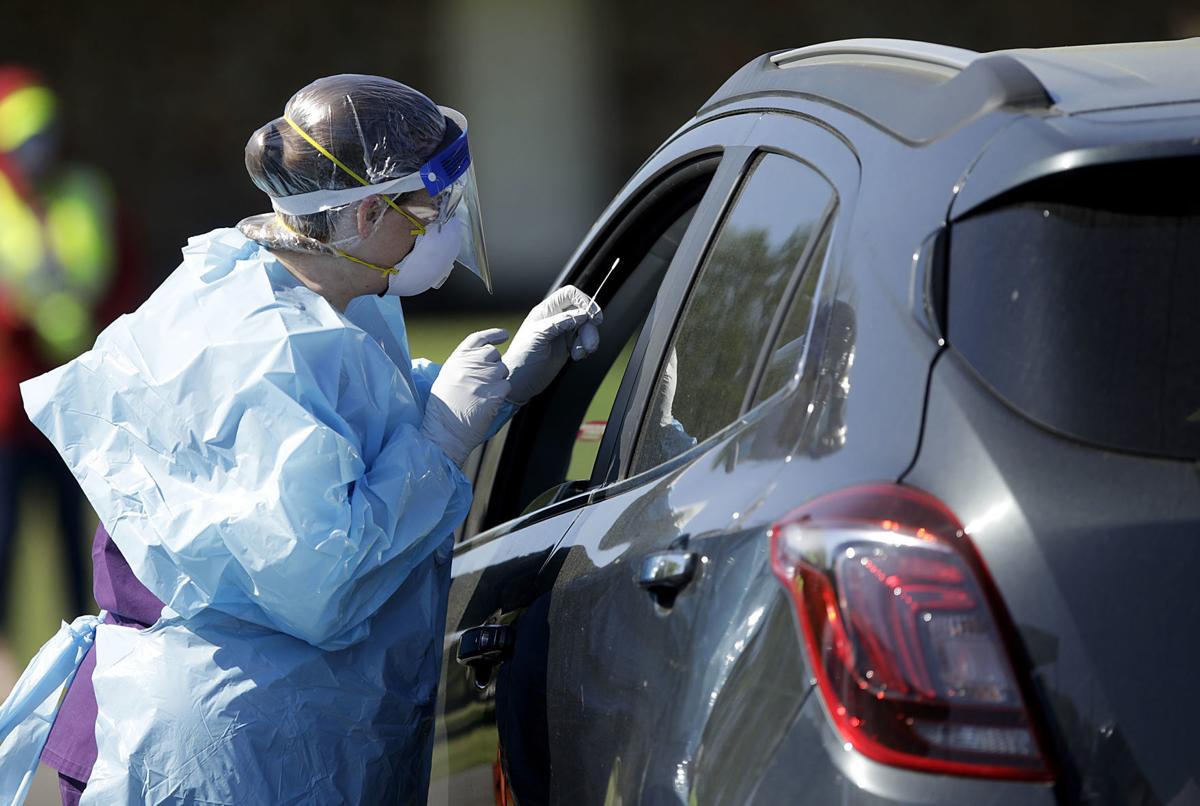 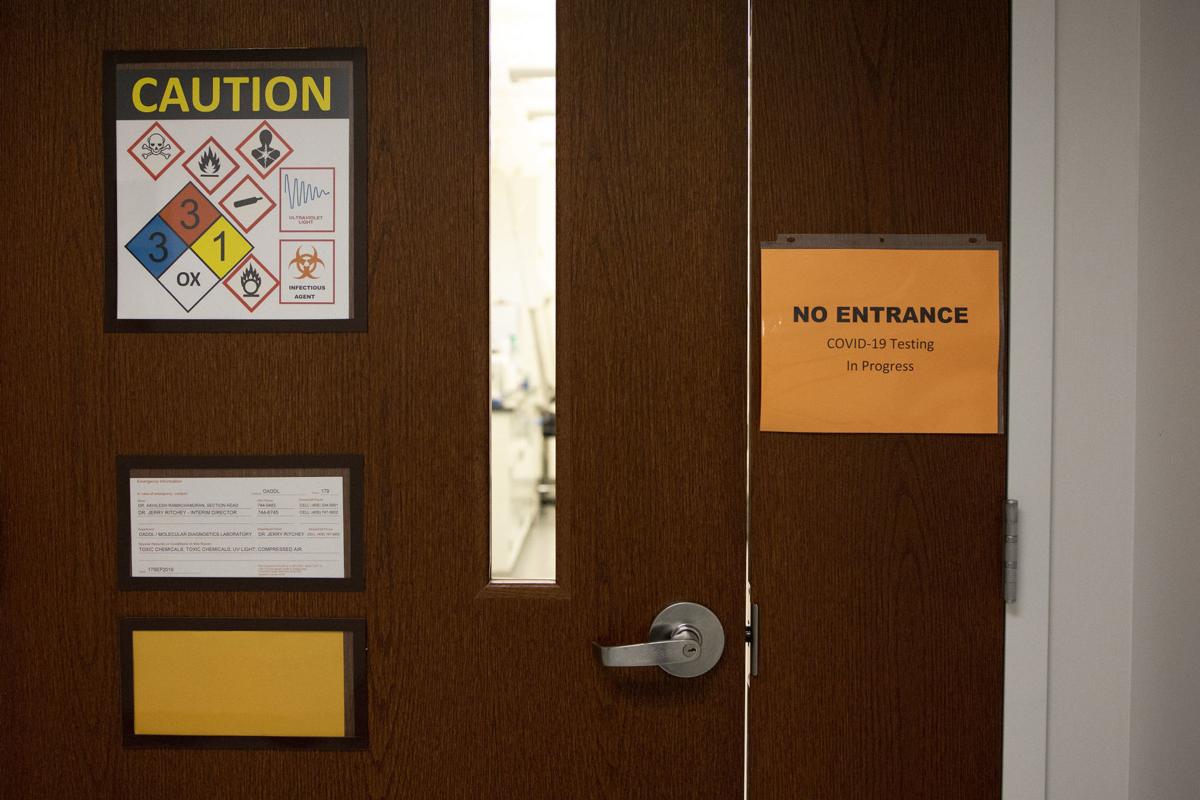 Preliminary COVID-19 tests are being processed at the Oklahoma Animal Disease Diagnostic Laboratory on the Oklahoma State University campus. The first test samples have come from the Tulsa area according to Head of the Veterinary Pathobiology Dr. Jerry Ritchey. EVAN LEWIS/For the Tulsa World

Dr. Kayse Shrum talks with the media about the expanded COVID-19 testing that began at the Oklahoma Animal Disease Diagnostic Laboratory on the Oklahoma State University campus in April. EVAN LEWIS/For the Tulsa World

Preliminary COVID-19 tests are being processed at the Oklahoma Animal Disease Diagnostic Laboratory on the Oklahoma State University campus. The first test samples have come from the Tulsa area according to Head of the Veterinary Pathobiology Dr. Jerry Ritchey. EVAN LEWIS/For the Tulsa World

A diagnostics lab at Oklahoma State University is poised to begin the first in-state processing of COVID-19 saliva tests.

This new alternative is far less invasive for patients than the deep nasal swab test currently in wide use for detecting the novel coronavirus.

And health officials say collecting saliva samples in vials or cups from patients greatly reduces the potential exposure to medical workers conducting the tests and has been shown to cut down on the use of personal protective equipment by 90%.

“From the standpoint of what our lab does, there is no technical benefit. It just makes the testing process a little easier on the front end,” said Dr. Kenneth Sewell, vice president for research and president of the OSU Research Foundation.

About two weeks ago, state health officials announced Oklahoma would be rolling out the new test method for all 42,000 residents and staff members in long-term care facilities and nursing homes within 30 days. Deaths among residents and staff in those kinds of facilities account for 45% of Oklahoma’s total COVID-related deaths to date.

The state contracted with a lab in Lubbock, Texas, which has already begun the work of processing those saliva test samples, while OSU has been awaiting federal authorization.

Once up and running, the OSU diagnostics lab will be capable of processing 1,300 saliva tests every 24 hours.

Sewell thinks having that lab capability in state will soon open up the saliva testing option for more Oklahomans, especially those for whom deep nasal swab testing is challenging, such as other elderly individuals, children and the incarcerated.

“I think the plan is for long-term care (and nursing homes) to continue to utilize this lab in Lubbock. Us coming on board will allow us to expand testing to children and the prison population and maybe even these pop-up testing labs — the whole idea is to expand testing,” said Sewell.

Asked how accessible saliva testing will be to private doctors, and clinics and hospitals across the state, Shelley Zumwalt, a spokeswoman for the Oklahoma State Department of Heath, said: “Once OSU is certified and we can do more widespread testing, I think the plan is to get it out to more places.”

The Tulsa Jail, for one, is already lined up to begin administering saliva tests as soon as the OSU lab gets the all-clear.

Oklahoma among the first wave for new method

In mid-April, the FDA first authorized this saliva-based test for “emergency use” for diagnosing COVID-19.

Oklahoma found itself in an advantageous position to be able to replicate the method here quickly for two reasons:

First, because of a personal connection between two or three state health leaders here and the leader of the laboratory at Rutgers University, The State University of New Jersey, where the FDA-authorized saliva test was developed.

And second, because the OSU diagnostics laboratory uses the same reagents — or the substances used to carry out COVID tests — and an almost identical testing process as Rutgers.

“Through a partnership with Rutgers, we essentially copied their test. But our lab has one different brand of an automated device ... for genetic extraction than the one Rutgers has. That is why FDA is requiring us to go through the full validation process,” said Sewell. “It’s good that the FDA doesn’t just approve — we do have to demonstrate that we can do this.”

How accurate are the tests?

In this case, the validation process required OSU to test 30 people using both nasal swabs and saliva samples and get matching results, which the FDA reviews.

Ultimately, what patients are most concerned about is accuracy, and Sewell said they can be assured saliva tests are just as accurate as COVID-19 tests conducted by swabbing deep into the nostril down into the region of the pharynx to collect secretions.

“Nothing is ever going to be 100% but we have no confirmed false negatives. A positive result is way beyond 99% accurate,” said Sewell. “If you get tested because you think you’ve been exposed, really, what you want to know is: ‘I went and got tested and it was negative — how accurate is that information?’ ”

Sewell said during the saliva test validation process, the OSU lab has had one interesting finding.

“We are able to look at what’s called the ‘viral load’ — when there is virus in it (the specimen), we are able to look at the quantity,” he said. “What we’re finding is the viral load appears higher in saliva samples than it does in nasal swabs. It looks as if the saliva has at least as much if not more.”

With no certain end to the novel coronavirus pandemic in sight, pursuing another test option that is just as accurate, and less painful for the patient and safer for medical workers than nasal swabs, just makes common sense, Sewell added.

“We hope it will pay off for everyone as we go down this path. We are going to need testing for a while,” he said.