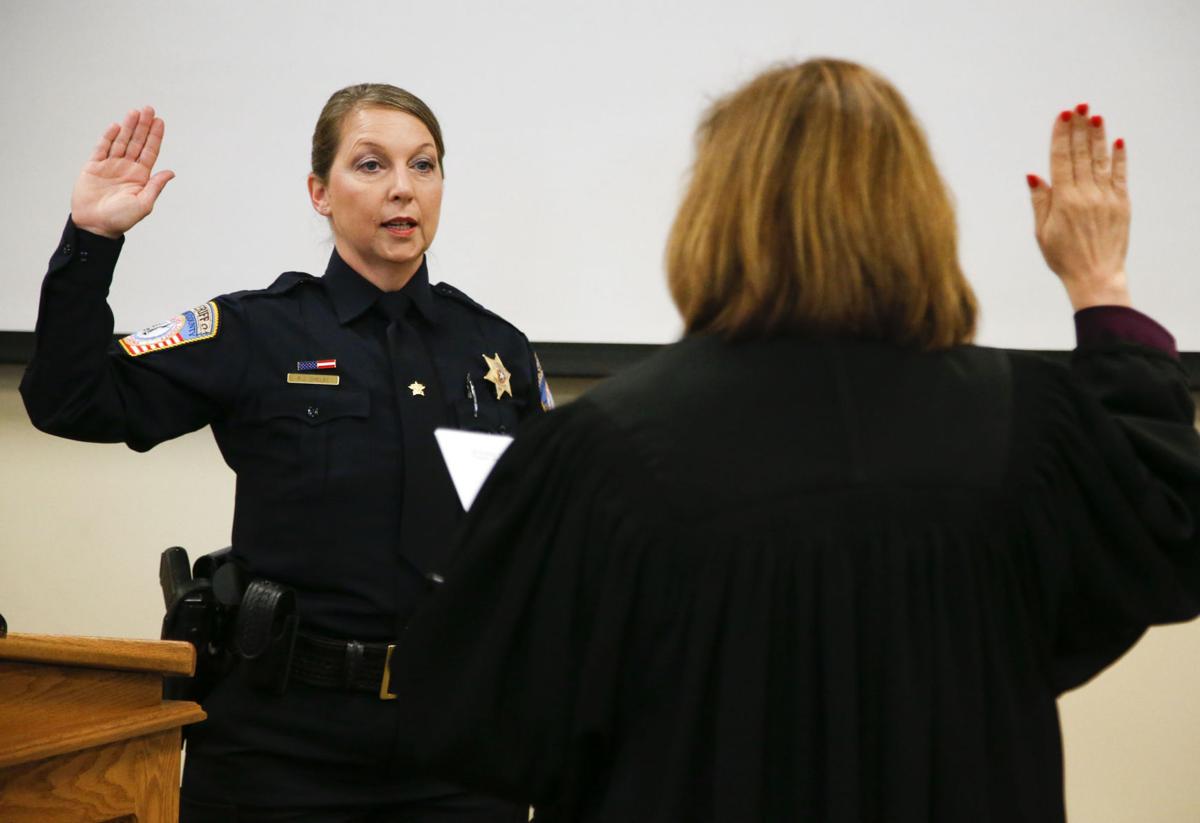 Former TPD Officer Betty Shelby is sworn in as a reserve deputy for the Rogers County Sheriff’s Department in Claremore on Thursday. JESSIE WARDARSKI/ Tulsa World 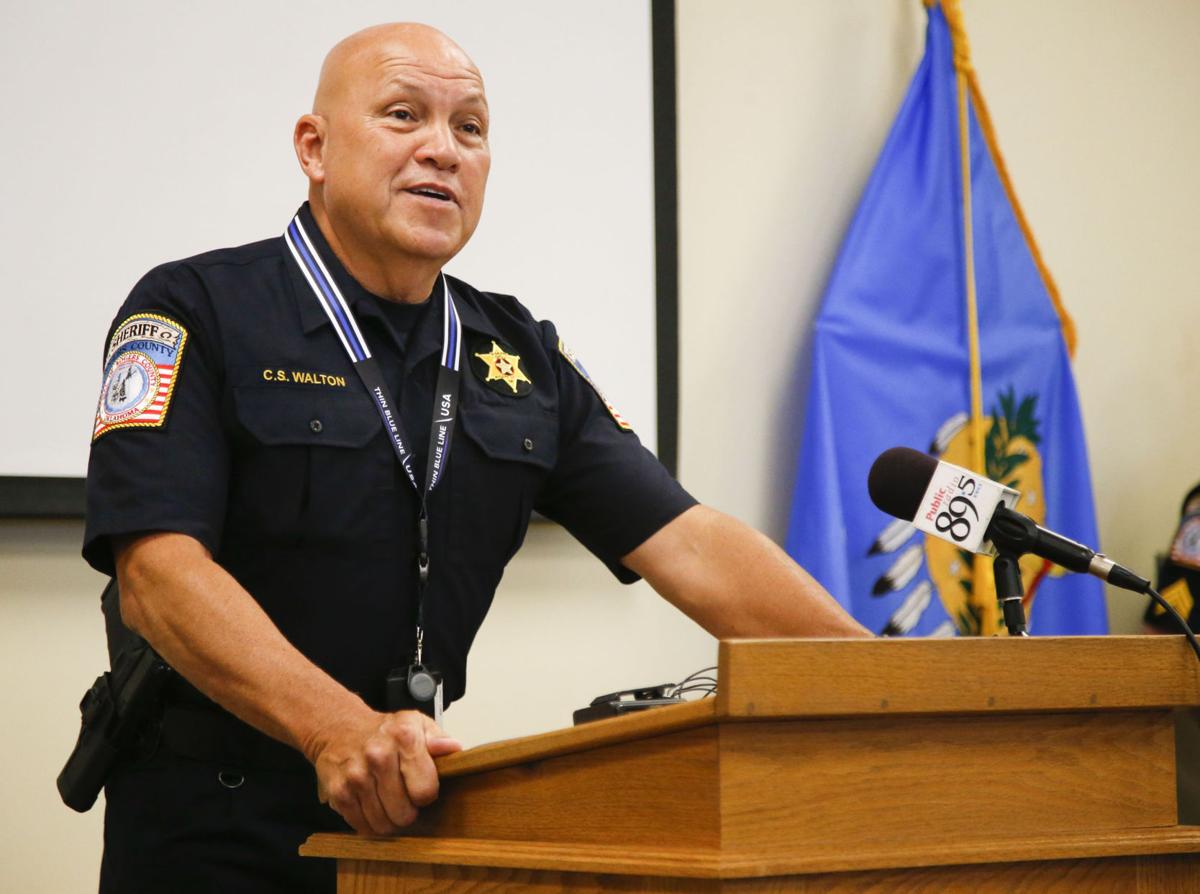 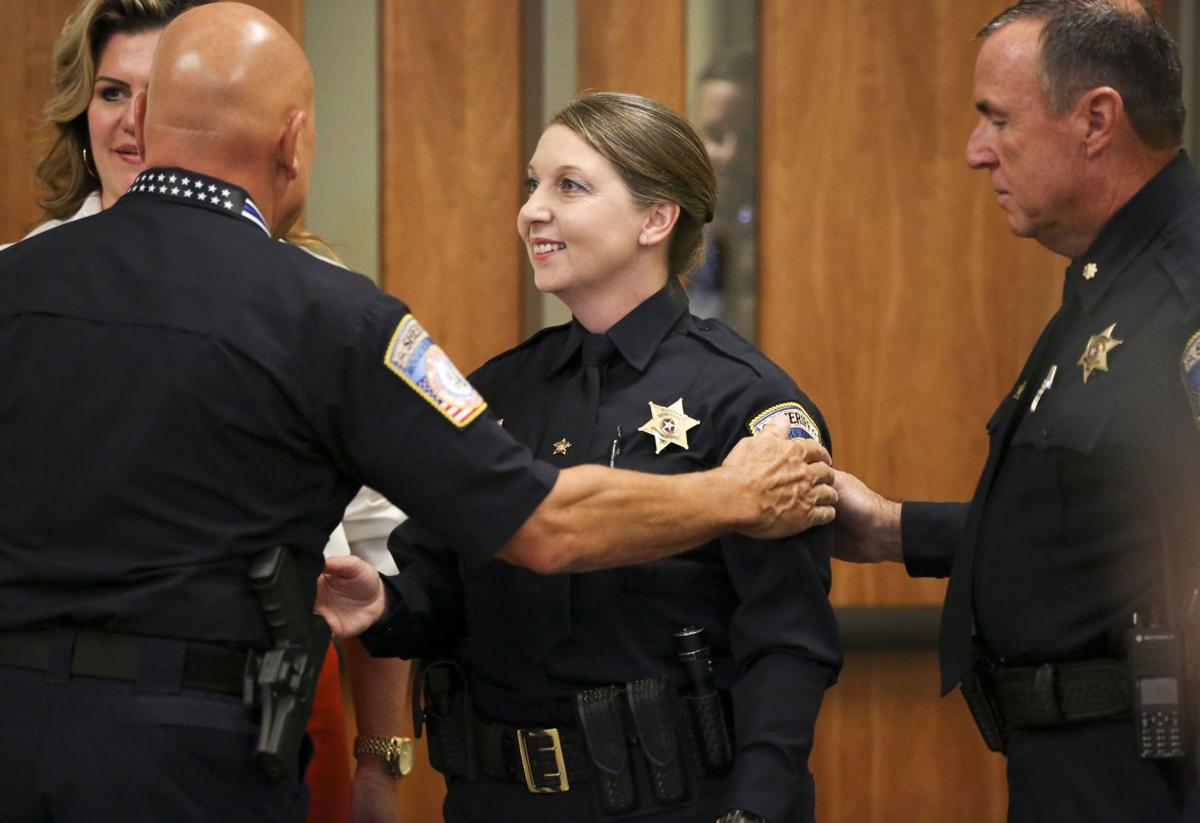 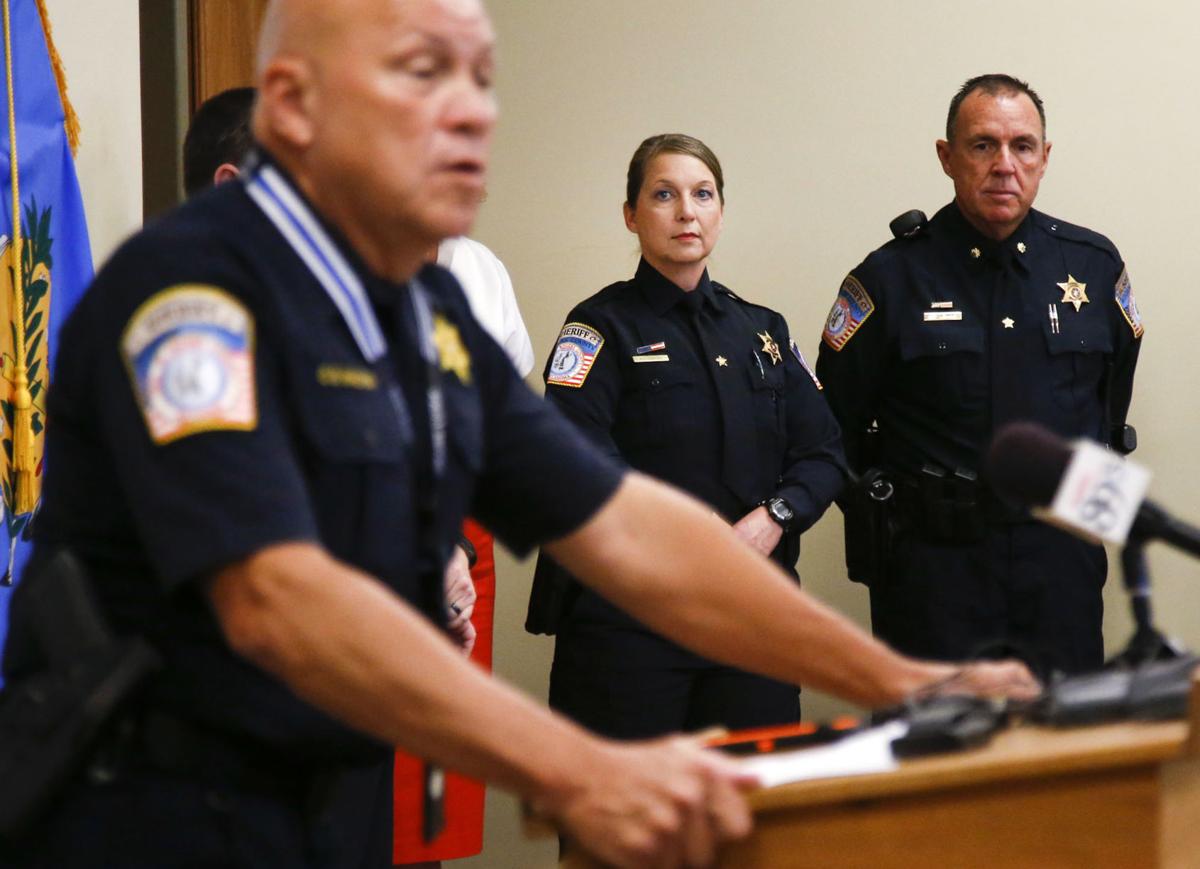 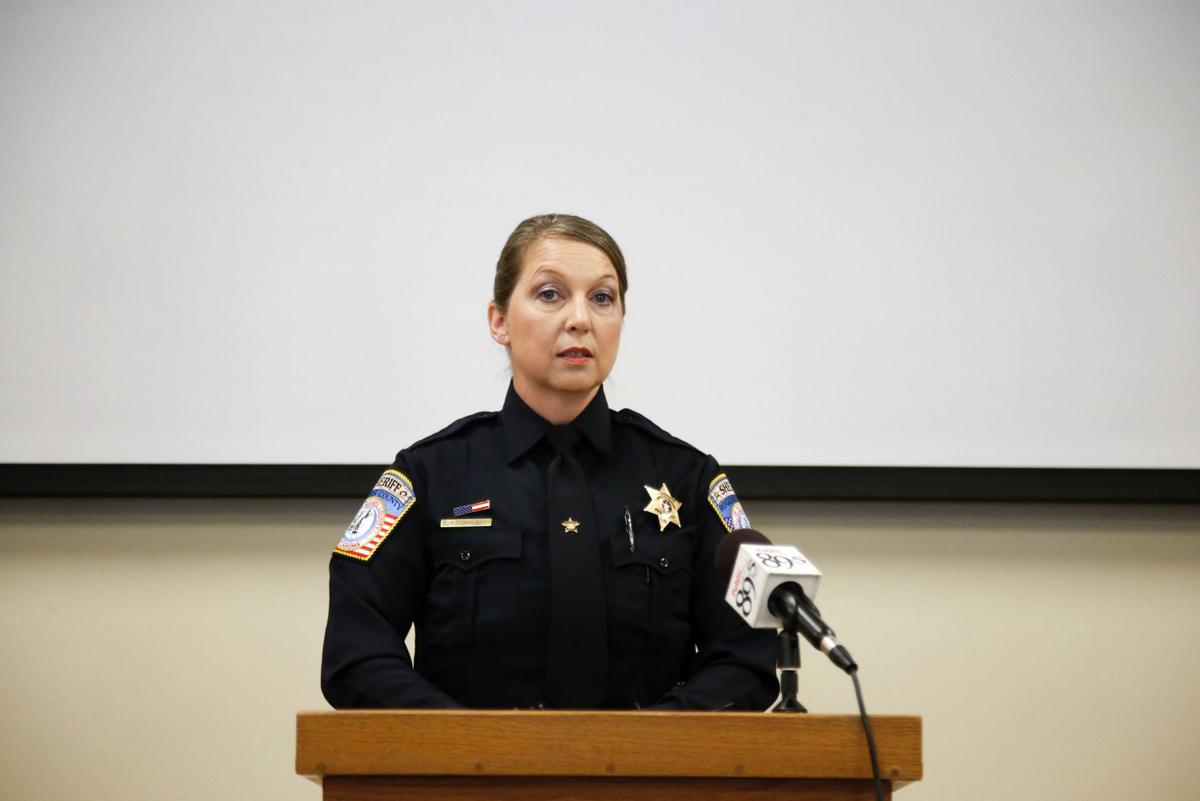 Former TPD Officer Betty Shelby speaks after being sworn in as a deputy on Thursday. JESSIE WARDARSKI/ Tulsa World 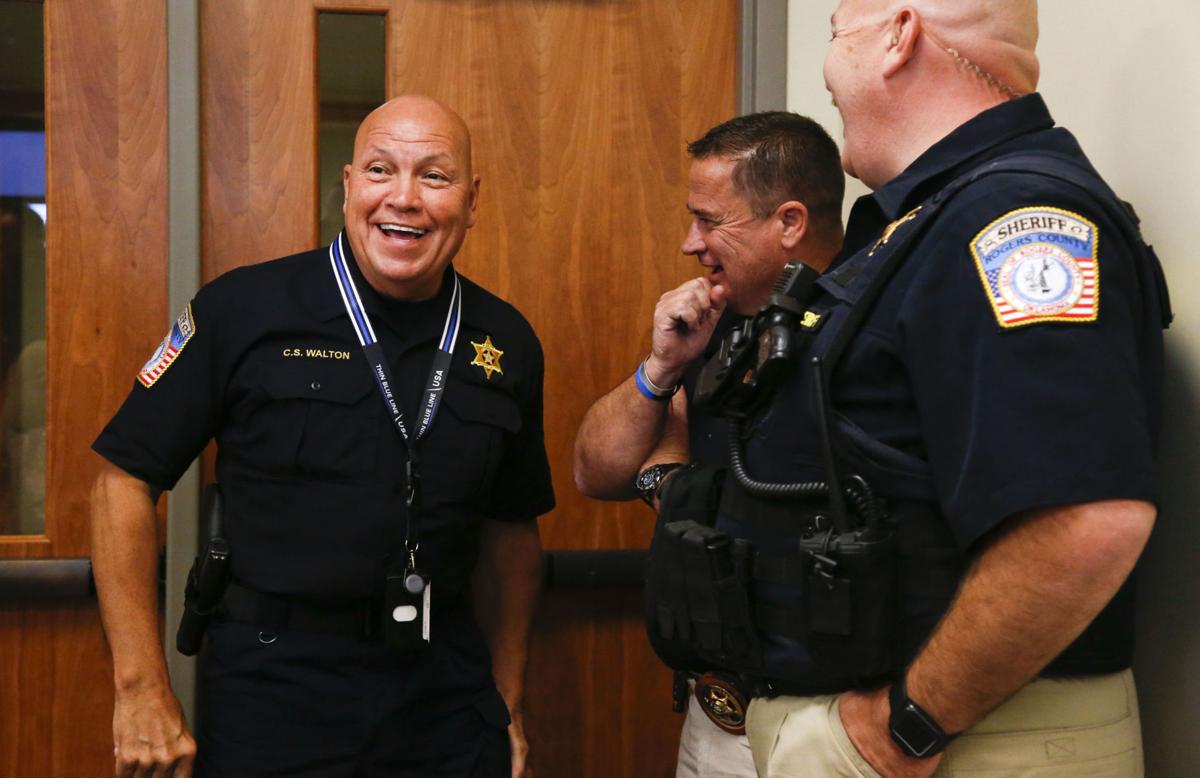 Former TPD Officer Betty Shelby is sworn in as a reserve deputy for the Rogers County Sheriff’s Department in Claremore on Thursday. JESSIE WARDARSKI/ Tulsa World

Former TPD Officer Betty Shelby speaks after being sworn in as a deputy on Thursday. JESSIE WARDARSKI/ Tulsa World

VIDEO: Former TPD Officer Betty Shelby is sworn in as a reserve deputy for the Rogers County Sheriff's Office

CLAREMORE — Speaking publicly on Thursday for the first time since her acquittal on a manslaughter charge in May, Betty Shelby announced her addition to the Rogers County Sheriff’s Department as its 31st active reserve deputy.

“I am honored to have been chosen to be a part of this wonderful department (and to work) with the citizens of Rogers County with a sheriff who is dedicated to ensuring justice for all, whether they are law enforcement or a member of our community,” Shelby said during a news conference at the Rogers County Courthouse.

Sheriff Scott Walton, a vocal supporter of Shelby while she awaited trial in the Sept. 16 shooting death of Terence Crutcher, said Wednesday that Shelby would become a reserve deputy with the possibility of full-time deputy status depending on her other obligations.

Walton used his position as Rogers County’s top law enforcement officer to repeatedly question on social media the merits of Shelby’s prosecution and said a guilty verdict would set a bad precedent for officers simply trying to do their jobs.

“When officers are so scrutinized in the use of deadly force that they draw back and wait and hesitate and overthink situations (and) in turn get themselves killed, we’ve taken away not only their protection, but we’ve taken away their ability to protect the people we’re sworn to protect,” he said Thursday after Shelby was sworn in.

“I would hate to think that I was part of sitting there quietly and letting a movement take over and take our ability to protect and not only protect people, but get officers killed.”

Walton said Shelby’s position, which is unpaid, will involve job duties similar to those of full-time deputies. She has been subject to an interview and a background check, and she will soon undergo testing to qualify to carry a firearm while at work.

“I certainly feel like we’ve hit a lottery on this deal,” he said of the hire.

Shelby announced her resignation in July from the Tulsa Police Department, where she worked since 2011, saying she wanted to be in the field rather than be isolated pushing paper behind a desk. Her husband, David Shelby, who flew a helicopter over Crutcher’s shooting in north Tulsa, also parted ways with the agency and has since joined the Creek County Sheriff’s Office.

Betty Shelby had been on unpaid leave since being charged with manslaughter Sept. 22 but went back to work May 22 in a non-patrol capacity, receiving back pay for the months she was not in uniform.

Shelby isn’t expected to immediately begin patrol duties, as Walton said she has other obligations including “nationwide” speaking engagements about the events of the past year. She declined to comment about the situation to reporters after the conclusion of the news conference but said she wanted to thank Walton for giving her the chance to continue being active “in the profession that I’ve dedicated my life to.”

“As a reserve deputy for the Rogers County Sheriff’s Office, I will continue to serve the great state of Oklahoma and strive to improve the relationships between law enforcement agencies, organizations and our community through education and community involvement,” she said. “I will work and contribute to the sheriff’s department’s mission of providing the highest quality of law enforcement services.”

When asked why he made news of Shelby’s hiring public, Walton said he wanted the community to know his agency was “loud and proud” about its choice to add her to the ranks.

“She wants to do her job and serve the community just like she said. It’s not a publicity stunt. It’s not a get-even deal,” he said.

In response to Rogers County Sheriff Scott Walton and reserve deputy Betty Shelby's press conference, local activist organization We The People Oklahoma issued a statement expressing the group's belief Shelby is unfit to be an officer.

Marq Lewis, who leads the organization, said evidence presented during Shelby's trial left him with the conclusion Shelby is "easily rattled" in stressful situations and noted a letter from the jury foreman questioned her judgment. He said the new job, as well as her choice to resign from the Tulsa Police Department, demonstrates her concern for her own comfort rather than what is in the best interest of the community.

"Betty Shelby's lack of accountability and empathy is astounding," Lewis said of the situation, "as is the fact that Rogers County Sheriff Scott Walton believes she is fit for duty as a reserve officer."

On Sept. 16, 2016, Terence Crutcher, 40, was fatally shot by a Tulsa police officer responding to reports of an abandoned vehicle in the road.…