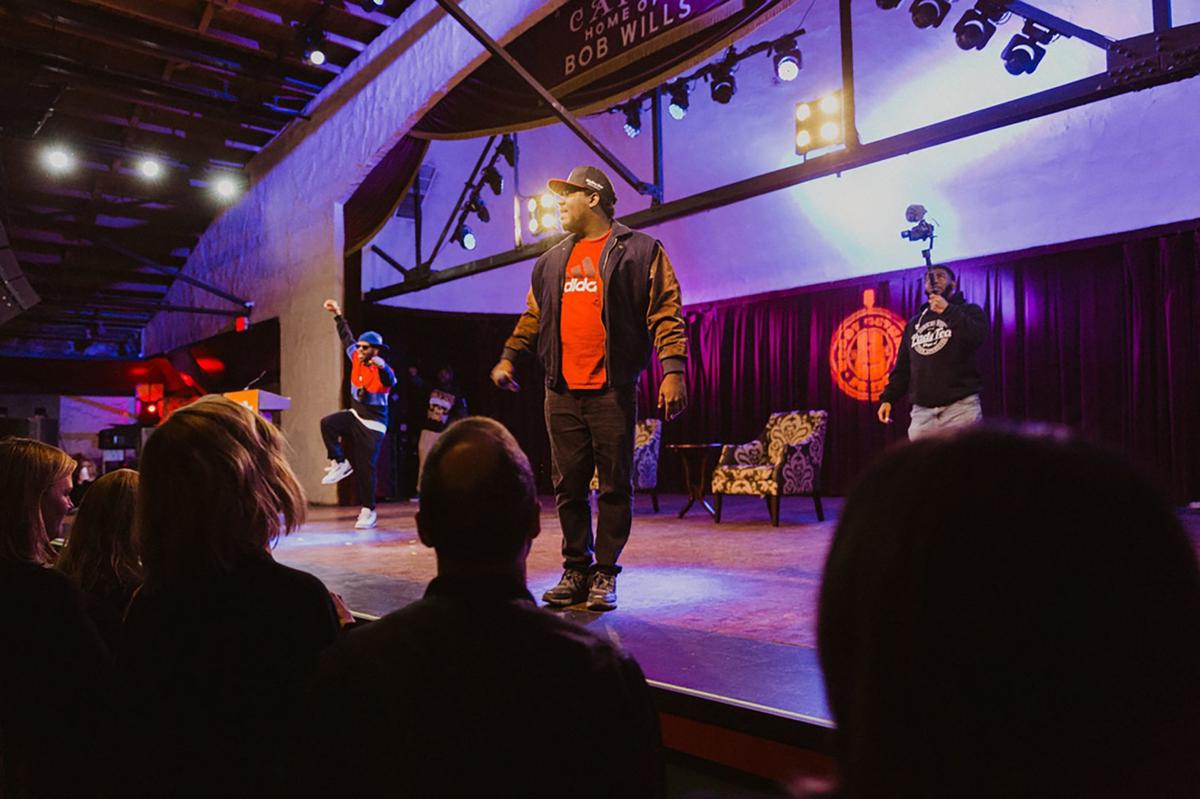 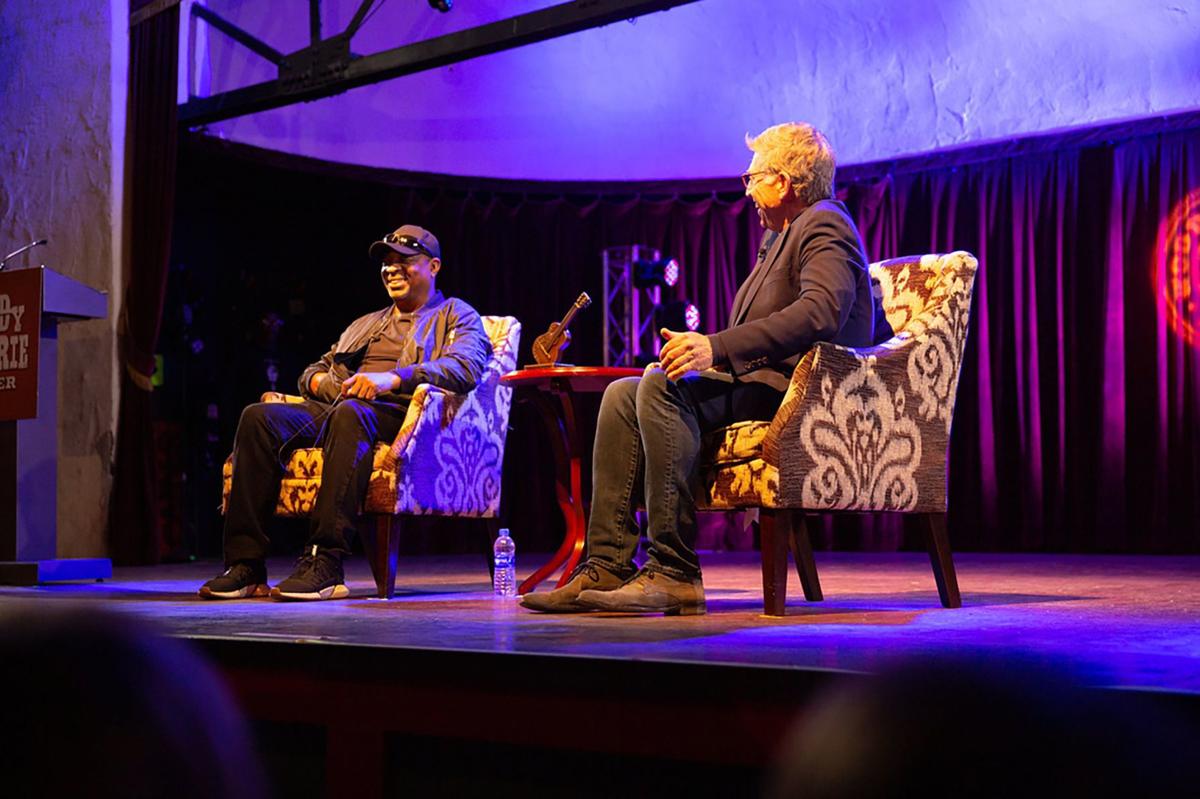 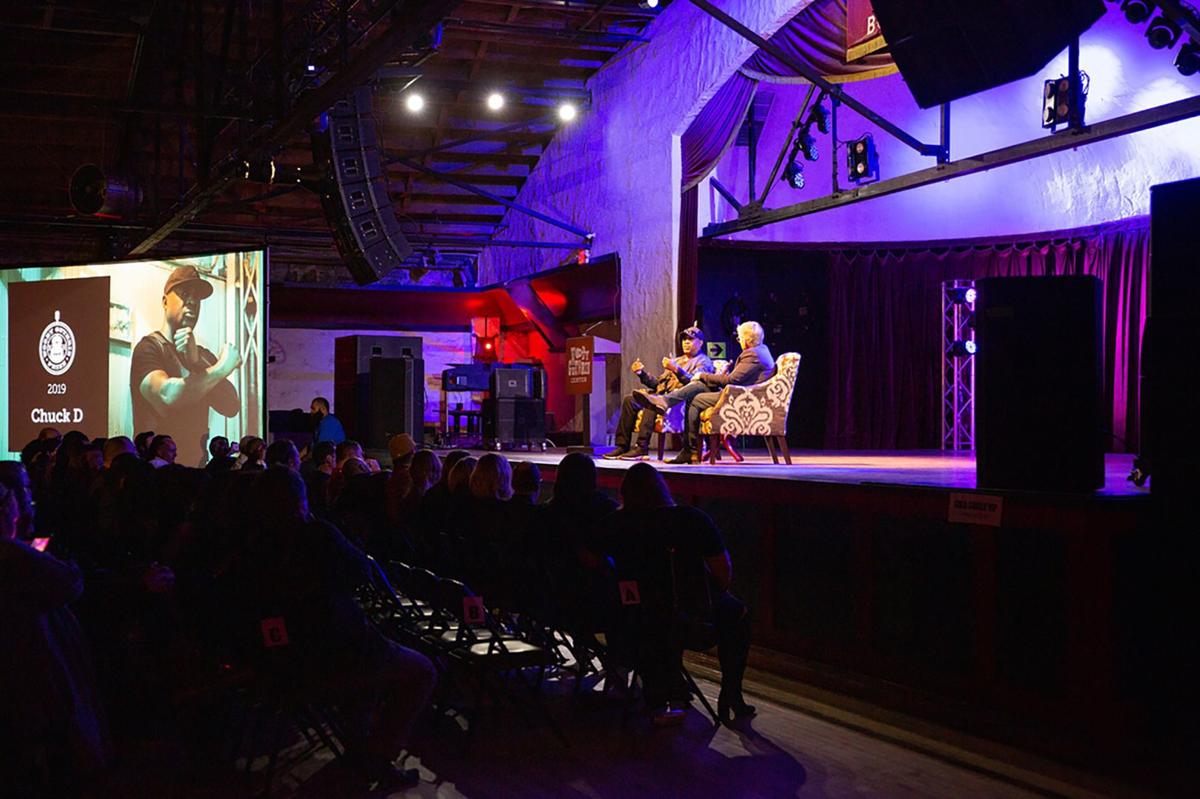 'I'm a big fan of his story:' Chuck D talks about being chosen for Woody Guthrie Prize

Carlton Douglas Ridenhour, known professionally as Chuck D, brought up a room full of hands to show the universal sign and to loudly state “peace.” He led the crowd in that proclamation Saturday night at Cain’s Ballroom, where he was being awarded the Woody Guthrie Prize.

Ridenhour spoke about the impromptu block parties in New York City where DJing and rapping were born, before a rap record was ever recorded. Residents would hijack electricity from light and electric poles, or someone would have a few spare rooms in old apartment buildings that “was on the way out,” Ridenhour said.

“They would get together and have these events, and music is what kept people’s heads up in a very dismal, depressing time,” Ridenhour said.

Simon followed up his homage with his original track, “Diamonds,” showing simultaneously the contrast and similarities between the East Coast boom bap of the ‘80s and the modern, bass heavy hip-hop of Black Wall Street.

The Woody Guthrie Prize is given annually to an artist who best exemplifies the spirit and life work of Guthrie by speaking for the less fortunate through music, film, literature, dance or other art forms, and serving as a positive force for social change in America.

The award was apropos. Public Enemy, the group for which Ridenhour was the front man, was born out of New York in the ‘80s, a time of significant strife that shares similarities with the Dust Bowl era that Woody Guthrie so frequently wrote about.

“Woody Guthrie, you know, for him it was sight, sound, story and style. And he was a great artist, a painter, an illustrator and musician — he couldn’t stop writing songs,” Ridenhour said. “He liked to also write commentary and go nonstop writing about what he didn’t like or be the voice for the voiceless, those that wouldn’t or couldn’t take time out to say what they express.”

Ridenhour has a storied career as a rapper dating back to 1981 and the golden age of hip-hop.

Known for his work in Public Enemy, Ridenhour has collaborated with artists such as KRS-One, Immortal Technique, Janet Jackson, Ludacris, Ice Cube, and the conglomeration Prophets of Rage, which consists of former Rage Against the Machine members, Cypress Hill frontman B-Real and Ridenhour.

Woody Guthrie Center officials selected Ridenhour for the center’s Woody Guthrie Prize due to Ridenhour’s longstanding tradition of using art and activism to bring issues facing black communities to the public forefront, according to a news release. Ridenhour’s lyricism combined with a resonant and commanding voice bring listeners to attention.

Public Enemy and Ridenhour’s various ventures frequently share a core of social justice. Ridenhour, in a previous interview with the Tulsa World, called Woody Guthrie a hero of the people who believed in freedom and fairness and equality and speaking for the voiceless and playing his music and just being himself.

Guthrie, a prolific musician best known for his folk tunes, often displayed the phrase “This machine kills fascists” on his guitar.

When Chuck D was announced as the 2019 recipient, Woody Guthrie Center Executive Director Deana McCloud said Woody was a fighter for the people and that Chuck D’s message has consistently aligned with Woody’s: Choose a side; fight the power; and work for a better world.