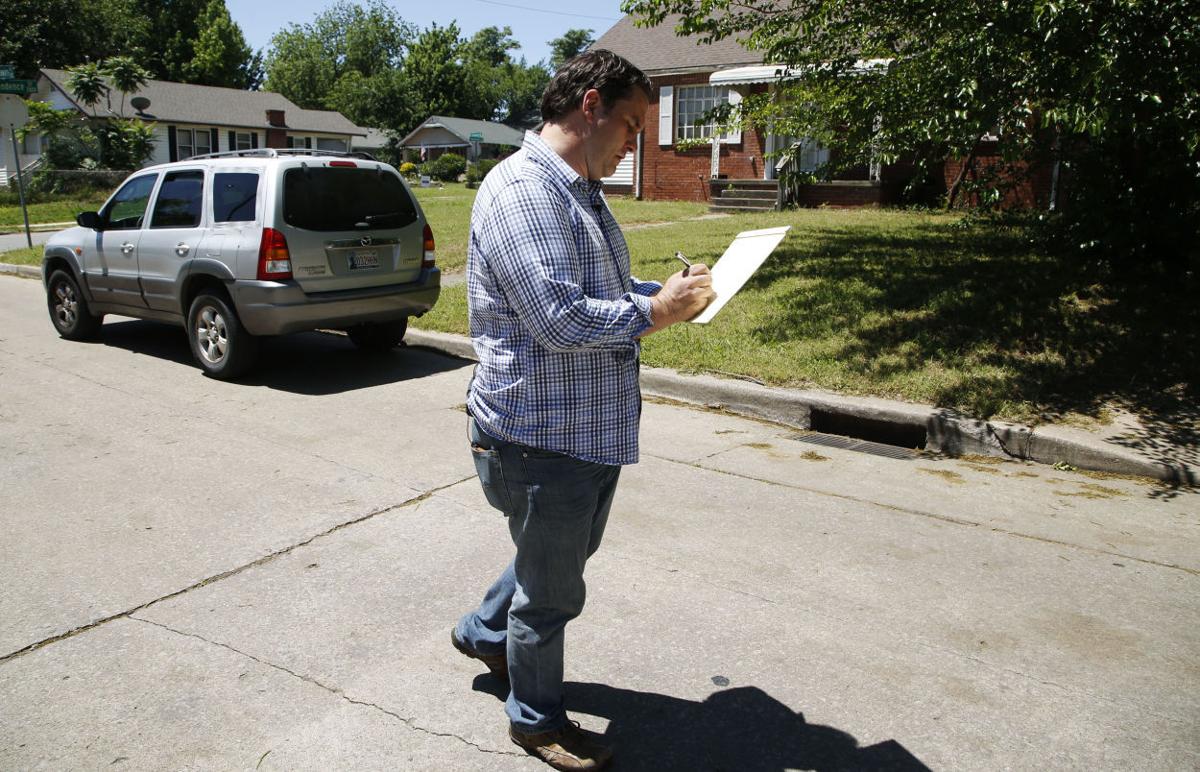 Private Investigator Eric Cullen checks the address of potential witnesses he needs to interview about a case in Tulsa, on Friday. JAMES GIBBARD/Tulsa World 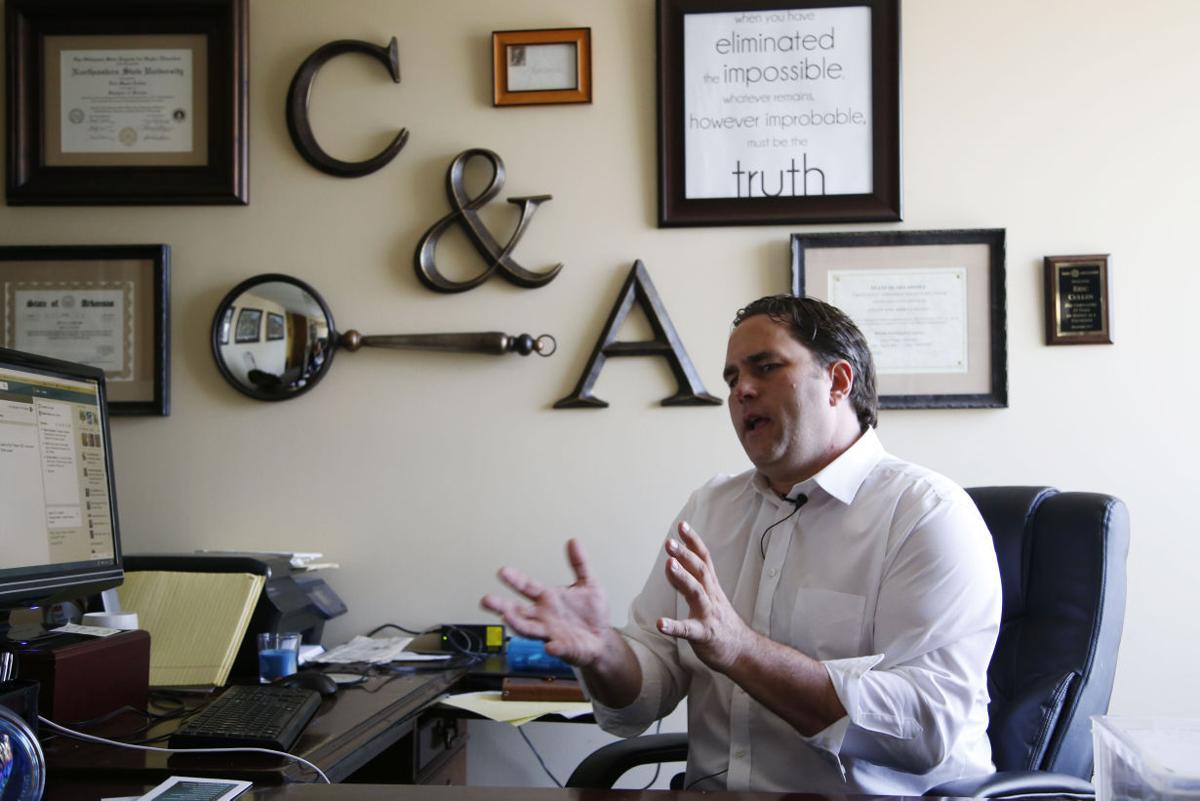 Private Investigator Eric Cullen chats in his office in Tulsa, Okla., taken on May 11, 2016. Cullen is a private investigator who recently was credited with the release of the two wrongly convicted Tulsa men. JAMES GIBBARD/Tulsa World 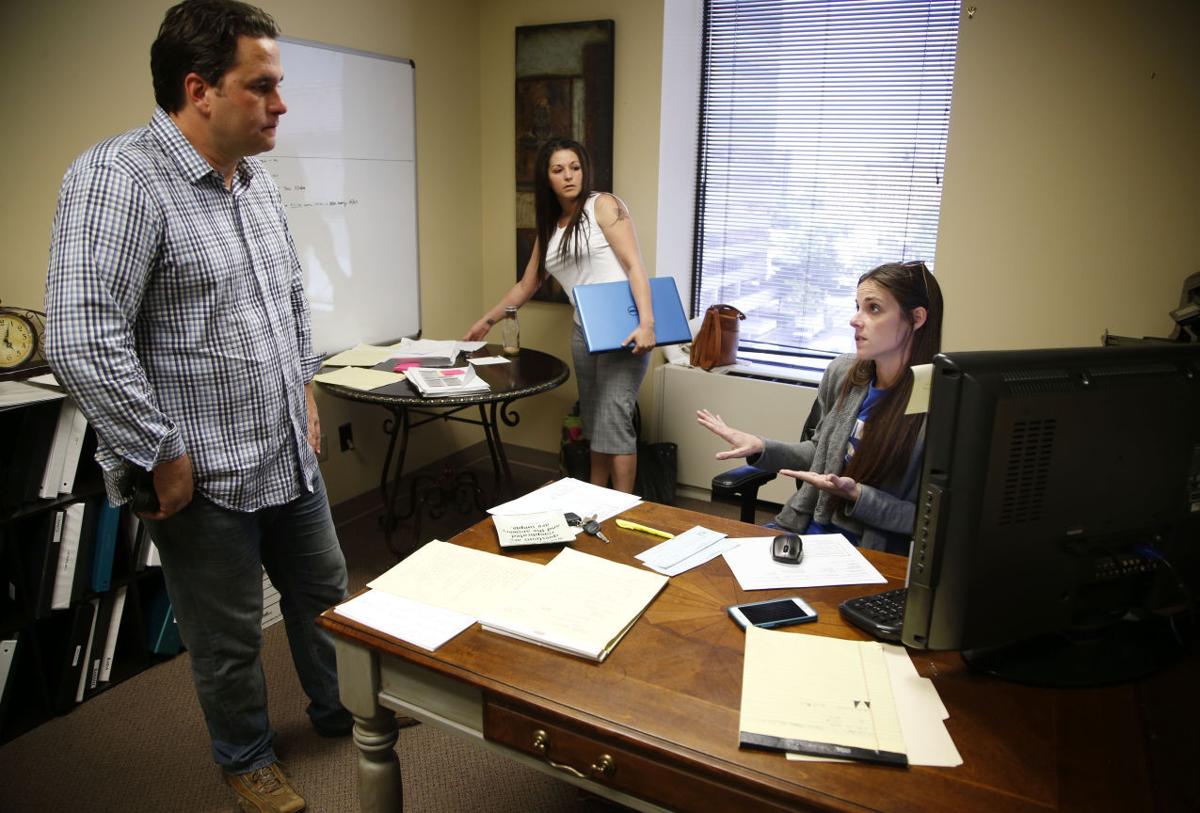 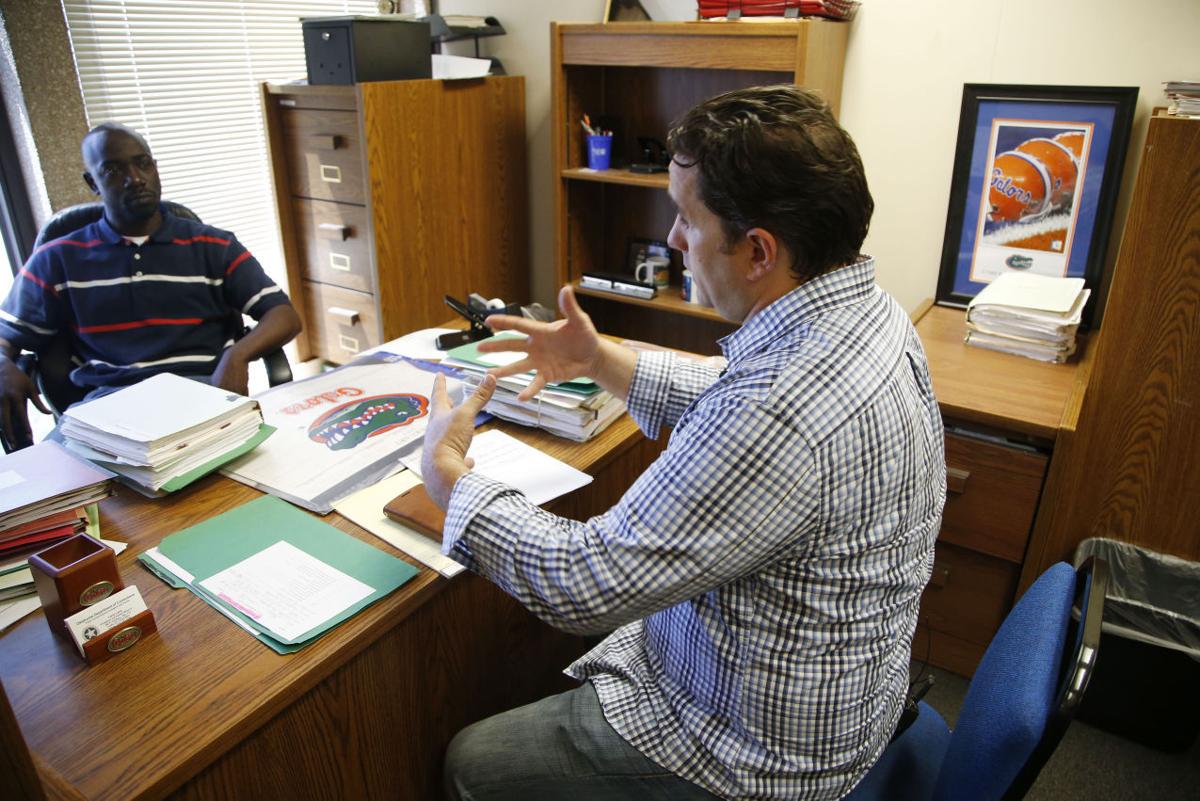 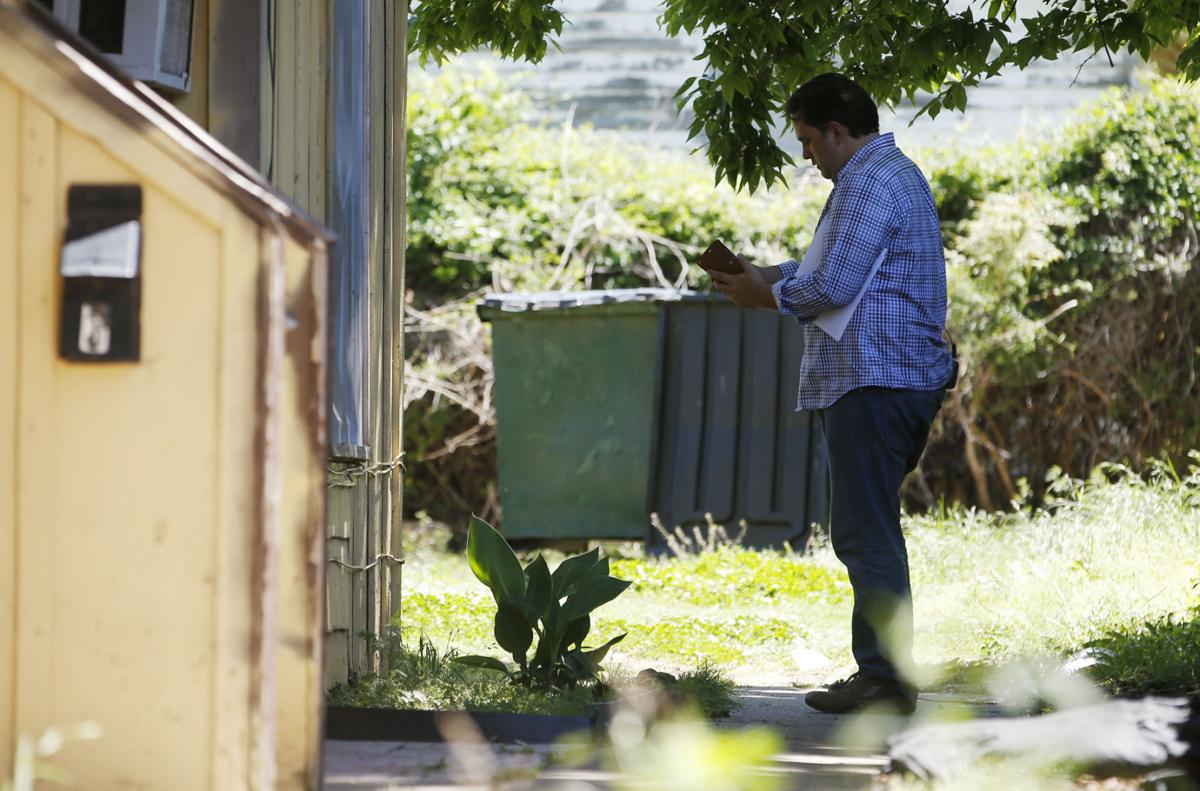 Private Investigator Eric Cullen checks the address of potential witnesses he needs to interview about a case, taken in Tulsa, Okla., on May 13, 2016. JAMES GIBBARD/Tulsa World

Private Investigator Eric Cullen checks the address of potential witnesses he needs to interview about a case in Tulsa, on Friday. JAMES GIBBARD/Tulsa World

Private Investigator Eric Cullen chats in his office in Tulsa, Okla., taken on May 11, 2016. Cullen is a private investigator who recently was credited with the release of the two wrongly convicted Tulsa men. JAMES GIBBARD/Tulsa World

Private Investigator Eric Cullen checks the address of potential witnesses he needs to interview about a case, taken in Tulsa, Okla., on May 13, 2016. JAMES GIBBARD/Tulsa World

It was the death of his best friend at the Tulsa Jail that brought Eric Cullen into world of private investigation.

Now, 15 years after that tragedy, the P.I. was again in the news, embraced by two men who walked free from prison after two decades wrongly imprisoned for murder. Cullen was given credit for finding the exonerating evidence.

Malcolm Scott and De’Marchoe Carpenter, 39, were released Monday after a Tulsa County judge declared them innocent of the 1994 drive-by shooting that killed 19-year-old Karen Summers. Cullen worked on the case for free for 10 years.

“He took it on when we didn’t have nothing,” said Scott.

Even though Cullen and his company, Cullen and Associates, have worked hundreds of jobs since he became a private investigator, the Scott-Carpenter case was among the first he accepted. It’s been the longest job, with many stop and starts.

In early 2006, Cullen sent pamphlets advertising his work in post-conviction relief to Oklahoma prisons. Scott and Carpenter responded by sending him convincing letters.

“I’m no fool. I had been doing criminal work for at least a year by that point, and I know people lie and people in prison say they are innocent,” Cullen said. “But they both wrote me without knowing the other was writing. They each laid out their innocence in detail — where to go to get corroborating evidence and who to talk to.

“Their claims set off a light for me.”

The newly discovered evidence includes confessions from three men that they committed the crime — one confessed during his final words before being executed for another murder — and the recanting of statements by two witnesses who had testified against Scott and Carpenter.

‘Times are changing’: Cullen has become a familiar face in our courtrooms in the last few years as a part of some high-profile cases. Tulsa private eyes make up a small community of five to 10 businesses.

“People need to know there are other options out there besides the police department,” Cullen said.

The son of a Tulsa police officer, Cullen thought he was going to work in law enforcement, either as an attorney or a police officer. His father, Clay Cullen, was a detective from 1965 to 1985 and then worked as assistant chief of campus security at Tulsa Community College.

“I was always around law enforcement. Every Sunday, I’d be on a ride-along with someone,” he said.

Cullen graduated from Union High School in 1993 and earned a degree in pre-law/paralegal from Northeastern State University in 1998. He applied to a police academy and took the law school entrance exam. But his father talked him out of police work, and an adviser said the legal field was saturated with attorneys.

Spencer, 27, was arrested after he was found passed out at the end of a driveway in east Tulsa. Video surveillance showed officers dragging his limp body into a cell, where he was left face down for several minutes until someone checked on him. He died of alcohol poisoning.

A civil lawsuit against Corrections Corporation of America, which ran the Tulsa Jail at that time, was settled later for an undisclosed amount, and the city of Tulsa paid Spencer’s family $200,000 and made improvements in its police training program.

“What got me into this was that civil rights case,” Cullen said. “He was my best, best friend growing up. No one was looking into his case, and his mother came to me.”

Quickly, Cullen draws parallels between his friend and Scott and Carpenter. The biggest challenge was getting an attorney to take the cases and a judge to grant a hearing. He was an unknown P.I., and exonerations weren’t so common.

But “times are changing; times are progressing,” he said. “I’ve proven myself with attorneys in the community. Now I have enough trust with them to take my cases.”

There isn’t much of a thread going through the cases he takes. About one-third are custody cases, one-third criminal defense/post-conviction relief and one-third civil services such as process serving. His clients are all east of Interstate 35, from Miami, Oklahoma, to Idabel and into northwest Arkansas.

Cullen was also part of the team that worked for the 2014 exoneration of Michelle Murphy, a Tulsa woman who was convicted in the death of her infant in 1994.

He has been on the defense teams for law enforcement officers facing charges, including the 2011 corruption trial of Tulsa Police Officers Jeff Henderson and Bill Yelton. Henderson was found guilty on eight counts of perjury and civil rights violations, and Yelton was found not guilty.

It was during this time that he came across the case of Betty Wolfe, a truck-driving grandmother who was convicted of drug possession with intent to distribute. Cullen said he found questionable aspects of her arrest, which was led by a federal agent and a former Tulsa police officer, who both pleaded guilty to corruption. Wolfe became one of 48 people released from prison as a result of the police corruption scandal.

“Of all the people they were letting out of prison after that, they were going to leave poor Betty Wolfe. I looked into it, wrote her and told her to get an attorney,” he said.

Among the sadder cases was finding the body of Talala resident Chazz Holly, 27, in July last year. Holly’s family had hired Cullen to find their missing son, who had cerebral palsy and delayed cognitive reasoning. The young man had been bound and gagged and tossed into the covered bed of a pickup and then dumped alongside the Indian Nation Turnpike. Vernon Lee-Mountel Smith, who Cullen suspected of wrongdoing, eventually led investigators to the body. Smith and three other men are charged with first-degree murder.

“That was by far the toughest one on me,” he said. “It fell into place in a tragic way.”

“If there was a blueprint to this, I probably wouldn’t follow it. I’m a free thinker,” he said. “I’ve had the pleasure of working with the top attorneys in the U.S. I’ve had a backstage pass to how great legal minds work.”

The lucky ones: It’s becoming more rare to get a case with DNA evidence to test for a wrongful conviction. Most old cases with available samples have been tested, and newer crimes routinely go through that process.

What’s left are cases with other evidence. With Scott and Carpenter, prosecutors relied heavily on eyewitness testimony.

“They aren’t the only two guys. They are the ones lucky enough to get out,” Cullen said.

He is launching an effort to investigate post-conviction cases with strong possibilities of wrongful conviction. The Oklahoma Innocence Project, based in Oklahoma City, cannot handle the hundreds of legitimate cases it has identified for consideration and has difficulty getting to Tulsa and northeastern Oklahoma.

This is where Cullen comes in with the agreement of a couple of attorneys and co-workers. He is intrigued by the gang and drug cases of the mid-1980s to mid-’90s, when federal, state and local officials gave great leeway to task forces and brought down heavy sentences on those convicted.

“There was a mentality of ‘us versus them,’ and there was a knee-jerk reaction to these violent situations, which were new at the time,” he said. “I am focusing on that time frame and looking at a lot of cases from then.”

One area he would like to see changed is the laws regarding hearings for possible wrongful convictions, saying the standards for granting one is too high.

“Why wouldn’t you want to have a hearing? We have set up different courts for different needs — veterans, mental health, drug courts — and all are important, and we need them. But the wrongly imprisoned people trump all of them. Freedom is the most important aspect people enjoy in their lives. The loss of freedom is second only to death.”