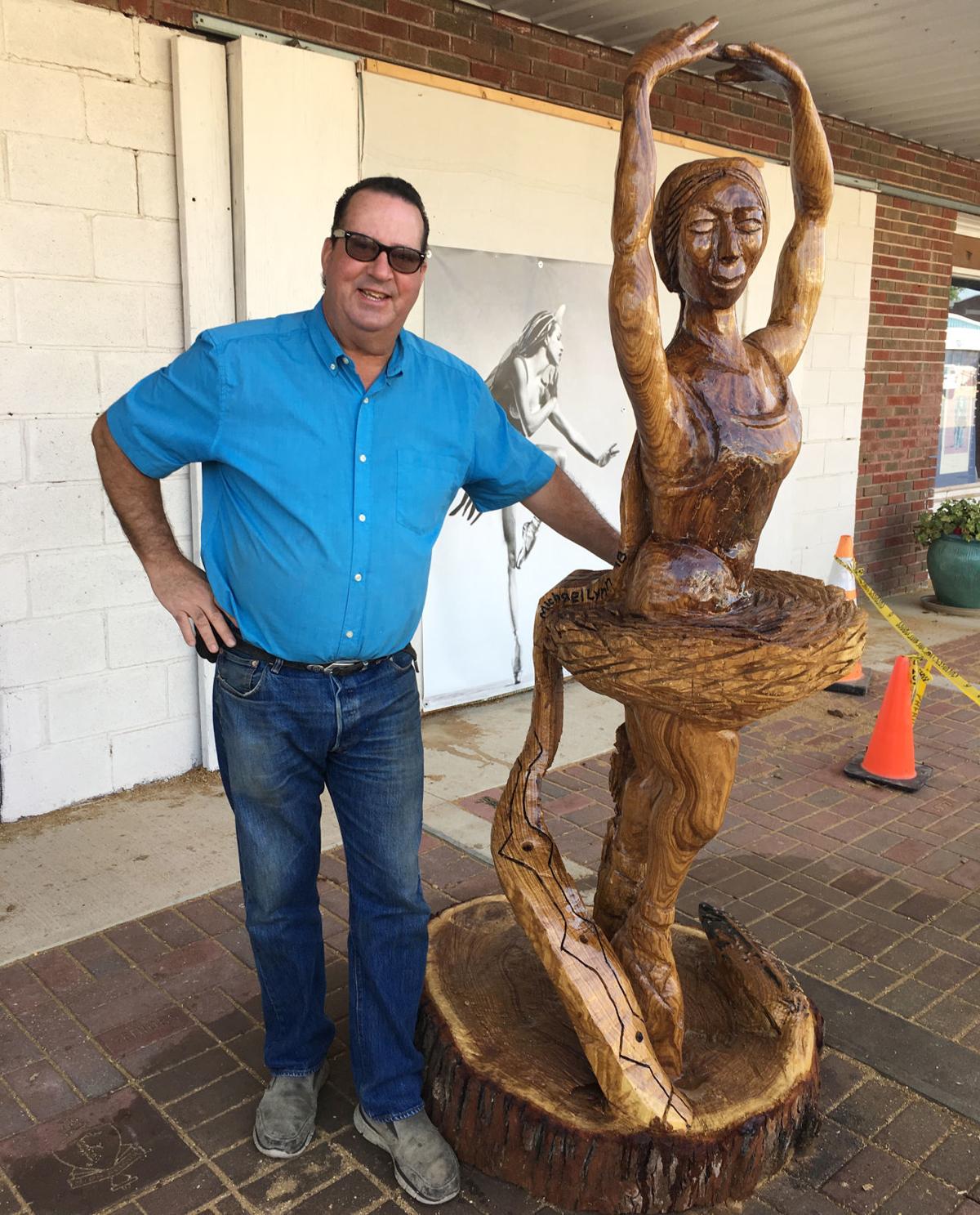 Artist Mike Lynn of Pawhuska stands next to the wood sculpture of prima ballerina Maria Tallchief he recently completed at the Tallchief Theater in Fairfax. JOHN KLEIN/Tulsa World 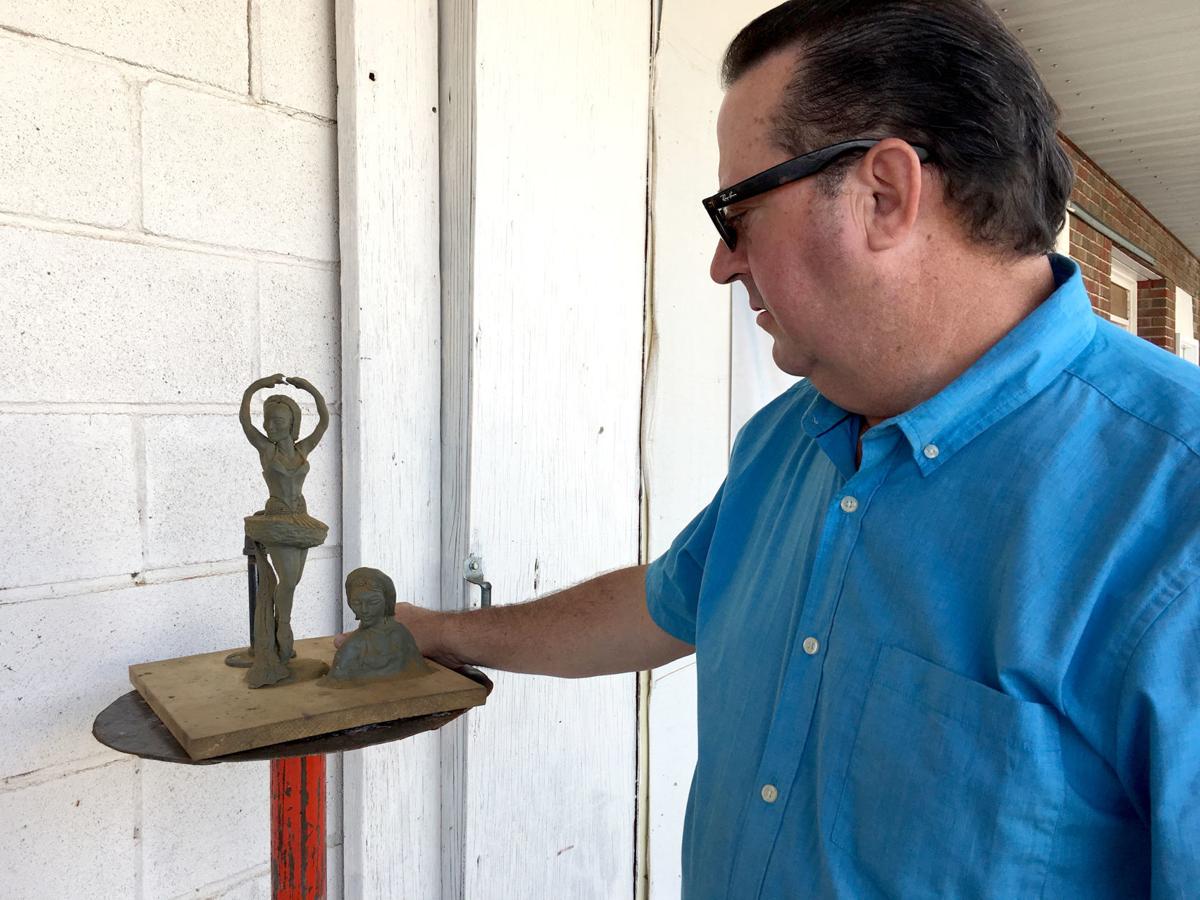 Artist Mike Lynn of Pawhuska stands next to the wood sculpture of prima ballerina Maria Tallchief he recently completed at the Tallchief Theater in Fairfax. JOHN KLEIN/Tulsa World

Then, lightning struck a tree in his yard. It splintered into many pieces.

“A few months later I was out there cutting that tree down,” said Lynn, an art teacher and bus driver with Pawhuska Public Schools. “I told my wife I was going to use what was left to carve a peace sign.”

He used an old chainsaw, and the result, on display in his yard, caught a lot of attention.

About six years and a dozen sculptures later, Lynn has earned a reputation as a talented chainsaw artist. He has created works of tree art from Bartlesville to Pawhuska to Fairfax.

His latest is a 6-foot wood sculpture of famed ballerina Maria Tallchief, which stands in front of the Tallchief Theater in downtown Fairfax.

“When they called me to see if I could do something like that, I was excited,” said Lynn. “Maria Tallchief is one of the most famous ballerinas ever. She’s from this area, and she is an Osage Indian.

“Her family has a long history in Osage County. So does my family. It was really a labor of love for me.”

Tallchief, who died in 2013, was considered America’s first major prima ballerina and was the first Native American to hold the rank.

She was born in Fairfax in 1925. When she was 8, the family moved to California to advance the ballet studies of Maria and her younger sister, Marjorie.

Maria Tallchief danced with the Ballet Russe de Monte Carlo before she became a star of the New York City Ballet.

“This is such an important person in not only the history of the Osage tribe and Osage County, but she is one of the most famous Oklahomans in history,” said Lynn. “She’s up there with people like Will Rogers.

“To have a small part in helping immortalize her was very important to me. I was really thrilled to get this opportunity.”

There’s a movement in Fairfax to preserve the Tallchief Theater, which had been operated by Maria Tallchief’s father until the family moved to California.

The sculpture sits out front on the sidewalk. It is made of a burr oak harvested in Osage County near the Arkansas River.

When the tree was brought to Fairfax for carving, it was 8 feet tall and weighed about 6,000 pounds.

“It was a major task just to get the wood here,” said Lynn. “That took some planning to get what we wanted.”

Before he started, Lynn studied photos of Maria Tallchief and then created a maquette, a small-scale model of a full-scale sculpture.

For inspiration, he had posters and two maquettes surrounding his workspace on the sidewalk.

During the creative process, he listened on a headset to Roman Catholic hymns and Red Dirt music. “That music inspires me,” said Lynn.

Two weeks ago, with his plans in place, Lynn fired up his carving chainsaw and started to work. He also had other tools to make the intricate cuts on the sculpture.

“This was a little different because we had to start with her hands and work our way down the sculpture including a tutu,” said Lynn.

He estimates it took him about 40 hours over about four days to complete the sculpture. Then, he took a day to apply a lacquer finish to the sculpture.

He estimates the finished work of art is about 600 pounds and about 6 feet tall.

“I had a lot of people stop by while I was working,” said Lynn. “I had a lot of folks want a souvenir, so I’d give them a piece of the wood that I had cut off during the making of the sculpture.”

Lynn has been an art teacher for 30 years, including stops at Big Cabin and Skiatook, with the past 14 years at Pawhuska.

“I’m always trying to think of ways to inspire my students and other adults,” said Lynn. “I hope this will inspire young kids about the value of the arts.”

Lynn has done a variety of art over the years, but his chainsaw work is a relatively new art discipline for him after starting that peace sign in his yard six years ago.

He was asked to do a couple of chainsaw sculptures at the golf course in Pawhuska. That led to a tree sculpture of Kenneth “Boots” Adams, former Phillips Petroleum Co. president, at a golf course Adams founded in Bartlesville.

“I don’t know, but I would really like to do a tree sculpture of Marjorie Tallchief to go with her sister in Fairfax,” said Lynn. “This is their home. I think they belong together at their family’s theater.”