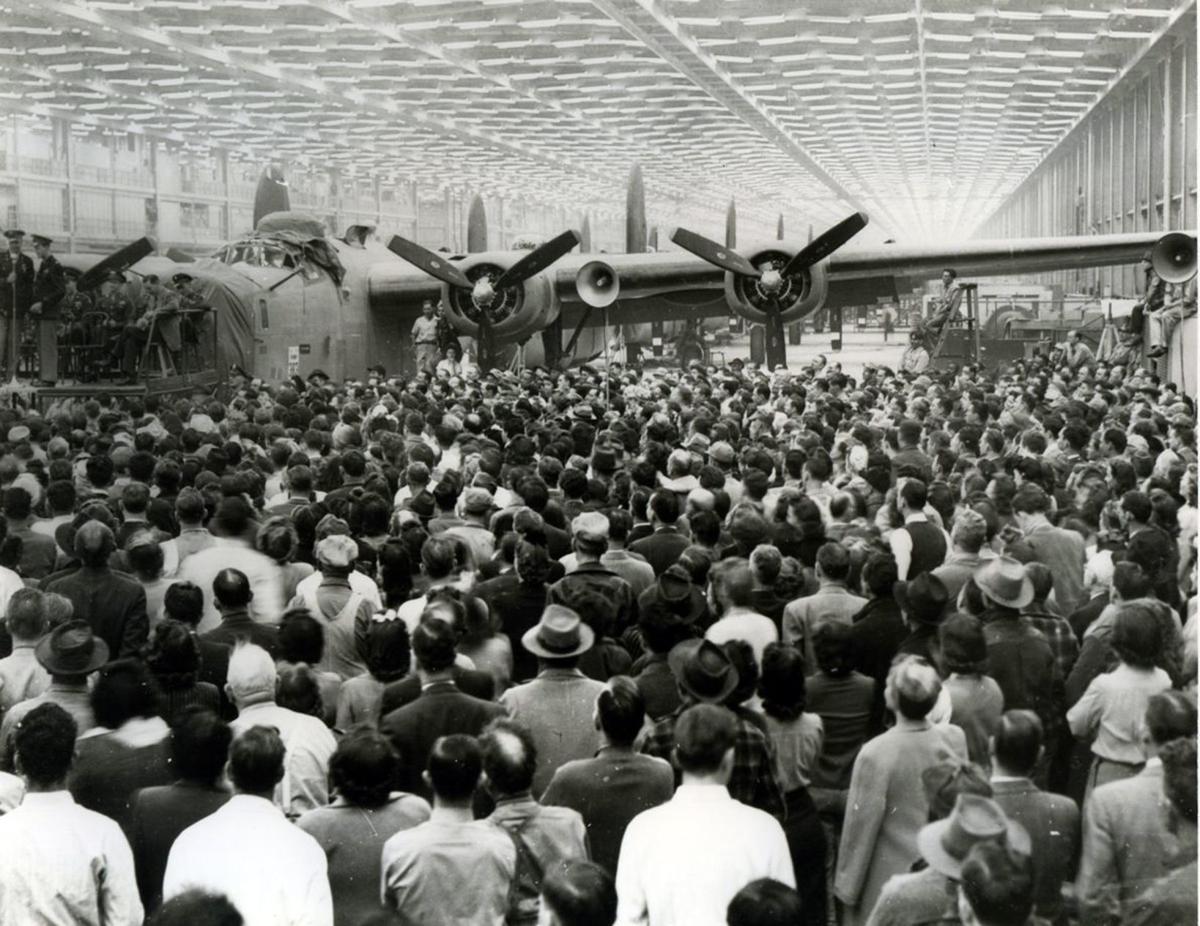 Employees gather for the dedication of the first B-24 Liberator built in Tulsa at the Douglas Aircraft plant in 1942. The plant built B-24s and A-26s in a 1.5-million-square-foot factory near Tulsa’s airport. Courtesy/Tulsa Historical Society and Museum 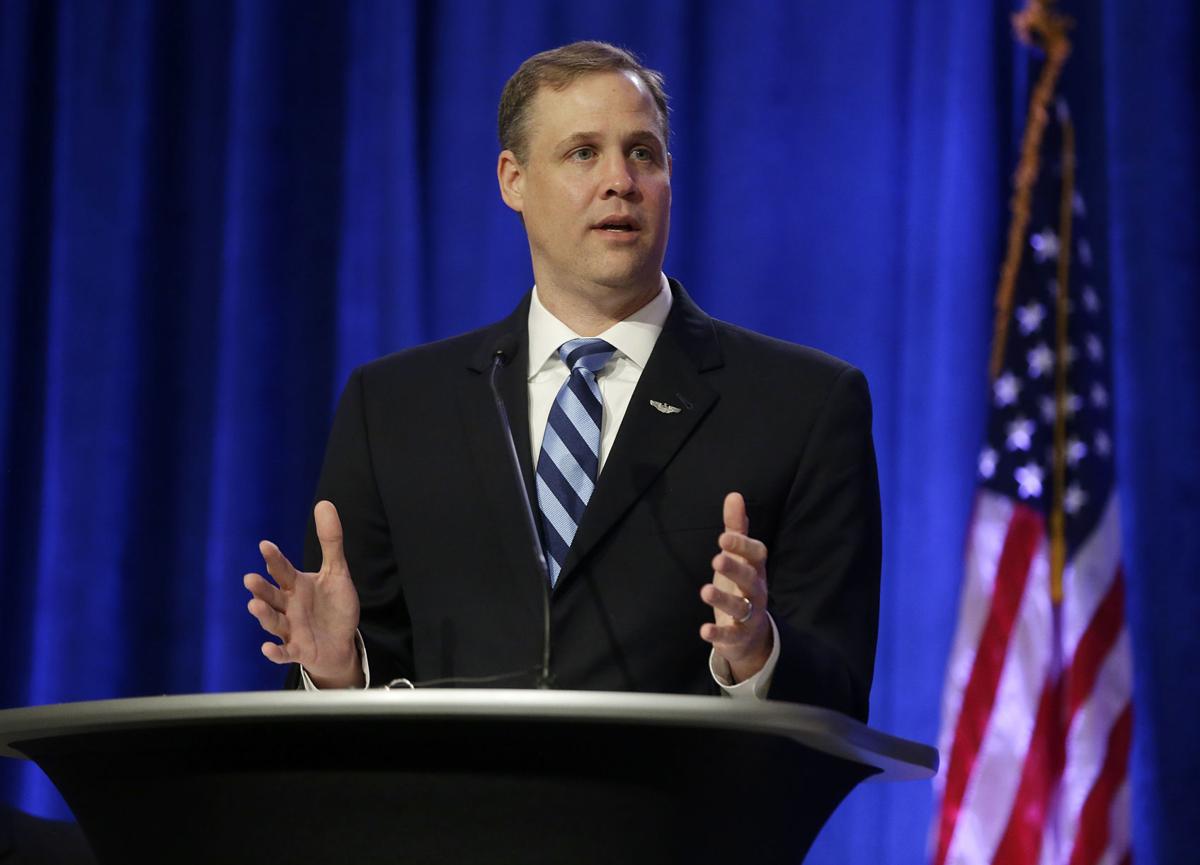 Rep. Jim Bridenstine says America is headed to the moon awnd to Mars in his first speeches since becoming director of NASA. Here, he speaks at a 2017 Tulsa Regional Chamber Congressional Forum. MIKE SIMONS/Tulsa World file

Employees gather for the dedication of the first B-24 Liberator built in Tulsa at the Douglas Aircraft plant in 1942. The plant built B-24s and A-26s in a 1.5-million-square-foot factory near Tulsa’s airport. Courtesy/Tulsa Historical Society and Museum

Rep. Jim Bridenstine says America is headed to the moon awnd to Mars in his first speeches since becoming director of NASA. Here, he speaks at a 2017 Tulsa Regional Chamber Congressional Forum. MIKE SIMONS/Tulsa World file

Bridenstine, a former U.S. representative from Tulsa, was finally confirmed by the U.S. Senate last month, more than seven months after President Donald Trump nominated him for NASA’s top position.

Tulsa’s direct link to NASA goes back to the federal agency’s early days.

Not long after Russia successfully launched the Sputnik 1 satellite into Earth’s orbit in October 1957, President Dwight D. Eisenhower signed a law creating the National Aeronautics and Space Administration, and the United States started organizing an effort to launch an object into orbit.

Much of the work was done by contracted firms, including aeronautics giant Douglas Aircraft, a World War II-era airplane manufacturer at the Tulsa airport.

In the aftermath of Russia’s initial space successes, Douglas and many other American aeronautics companies shifted into producing space technology.

In the late 1950s, Douglas was involved in the design and manufacturing of space propulsion technology.

E. Carlton James, who worked as an engineer at Douglas in the 1960s and 1970s, noted that “we did a lot of work no one had ever done before.” Because the field was so new, “we had to try things and see what happens. We had a lot of great engineers working.

“We had a lot of stuff we worked on that worked. Some of it did not.”

Much of the work was on early rockets, ways to launch objects into orbit around Earth. NASA did that and more, eventually matching and then surpassing the Russian space program.

It was estimated that more than 600 people worked in Douglas’ engineering department in Tulsa. Literally, Tulsa was a city loaded with rocket scientists.

“When I first interviewed for a job at Douglas, the emphasis was for the U.S. to get something into orbit,” James said. “I had no idea what we would be in store for in this project. But it was an exciting time … .

“Douglas was just coming off the manufacturing of a bomber. There were a lot of engineers at the Tulsa plant, so our department became very experimental with the goal of getting things into Earth orbit.”

It was a natural transition for an aeronautical company from wartime production of airplanes into the U.S.-Russia space race in the 1960s.

Air Force Plant No. 3, the city-owned 66-acre facility that is still in use at Tulsa International Airport, had been built in 1942 after Tulsa voters approved a $750,000 bond issue to purchase the land for it near then-Tulsa Municipal Airport.

The Tulsa plant was originally operated by Douglas Aircraft, based in Santa Monica, California. It later merged with rival McDonnell Aircraft.

During World War II, the plant employed about 24,000 people.

It produced the B-24 Liberator bomber, A-24 Dauntless dive bombers and A-26 Invader attack aircraft.

“We have a lot of nostalgia in aeronautics around Tulsa,” said James. “A lot of very smart people worked here on everything from airplanes to spacecraft.”

One of the most memorable moments for James came on Aug. 12, 1960, just hours after the launch of a satellite powered by rockets engineered in Tulsa. He knew approximately what time the satellite would pass over Tulsa just before dawn.

“My wife and I went up on Reservoir Hill near downtown and waited for it,” said James. “I remember a Tulsa police officer came up to find out what we were doing up there.

“So I told him what we were doing, waiting for that satellite that a lot of Tulsans had helped get up into space. So he stayed with us and watched as our satellite, brighter than any star in the sky, came up over the horizon and flew overhead and out of sight.

“It was quite a moment. I’ll never forget it. It was so exciting.”

President Trump has said one of his goals is for the United States to return to the moon. Bridenstine, in his first public speech as NASA administrator, echoed his boss, saying, “We are going to the moon.”

Bridenstine said unfulfilled promises from some previous presidents to return to the moon will not be repeated.

“Times have changed,” he said. “This will not be Lucy and the football again.”