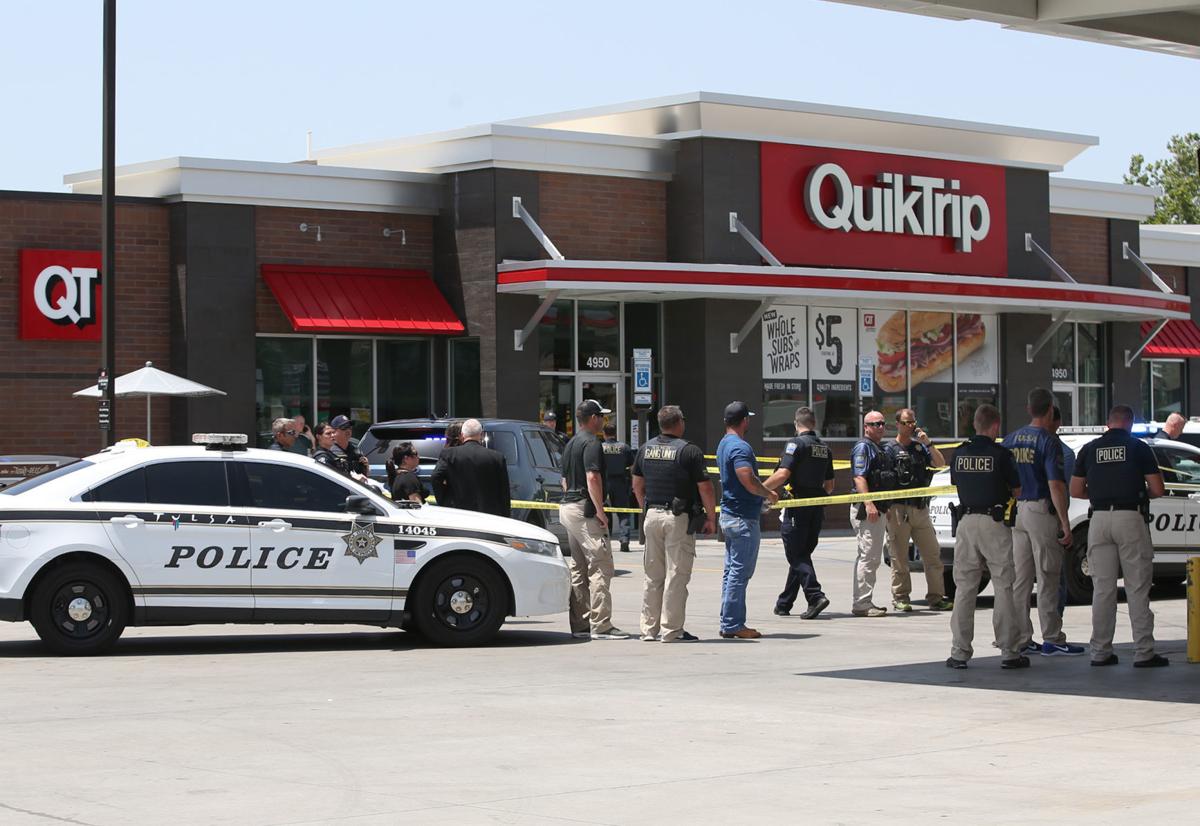 Police converge outside a QuikTrip on Harvard Avenue after a shooting on July 3. MATT BARNARD/Tulsa World

Update: TPD officer released from hospital after being shot; suspect remains hospitalized after exchange of gunfire

Sgt. Michael Parsons, who has been with the law-enforcement agency since 1993, was shot in the leg during a traffic stop in the parking lot of the convenience store July 3. He was released from the hospital that evening and is now on medical leave.

Officer Michael Caweizell was the officer who shot the suspect, John Terry Chatman Jr., during the encounter. Caweizell, who is part of the TPD organized gang unit, was placed on routine administrative leave pending an investigation of the shooting.

Neither officer had a reported complaint history.

The agency no longer release names of officers involved in shootings within 48 to 72 hours, police spokesman Shane Tuell said. The change reportedly is to allow the case to be presented to the District Attorney's Office, which is responsible for determining whether the shooting is justified, before the names are released as a safety precaution.

Tuell said officers sometimes receive threats from the public after being named in the aftermath of a shooting.

The story below originally appeared in Thursday's issue of the Tulsa World.

A man who authorities say shot a police officer outside a QuikTrip in early July was charged Wednesday, the same day body-worn camera video of the shooting was released.

Tulsa County prosecutors charged Chatman, 34, with three counts of shooting with intent to kill, possession of a firearm after a felony conviction, obstruction, driving under suspension and driving with an improper tag. Tulsa police officials subsequently released body-worn camera footage from the two officers who initiated a traffic stop with Chatman.

“We tried every option we could in that close proximity to get him to get out,” Tulsa Police Sgt. Shane Tuell said.

Chatman is accused of shooting at three Tulsa police officers — Officers M. Cawiezell and D. Bean and Sgt. M. Parsons — during a traffic stop on July 3, according to a probable cause affidavit.

About 15 minutes elapsed between the time the traffic stop was initiated and when Chatman shot at the two Gang Unit officers, Cawiezell and Bean, and the patrol sergeant, Parsons. Parsons was struck once in the thigh, according to the affidavit. Leading up to that time, the officers were trying to talk Chatman out of the vehicle, Tuell said.

“At the point when he says, ‘Just shoot me,’ it was apparent he was not going to be getting out of the vehicle.”

At that time the sergeant escalated to a less-lethal use of force and fired pepper balls at Chatman, Tuell said. Chatman responded by shooting at the officers with a pistol, hitting the sergeant’s leg, police said.

“As soon as Sgt. Parsons deployed the pepper balls, Chatman obtained a .32-caliber revolver handgun … and fired four times,” an investigator wrote in the affidavit.

Cawiezell and Bean initially stopped to talk to Chatman around 1:15 p.m. July 3 at the Trade Winds motel in the 3100 block of East Skelly Drive. The motel’s parking lot is adjacent to the QuikTrip at 4950 S. Harvard Ave., where the shooting occurred. Chatman and a woman were sitting in a parked minivan, and Chatman, who police had not identified by that point, “terminated” that contact, Tulsa Police Officer Jeanne MacKenzie said.

As Chatman drove away from the two officers, they checked the van’s license tags and found that they did not match the vehicle, police said. The officers then initiated a traffic stop at a gas pump at the QuikTrip.

“We did not know he had a firearm on him,” Tuell said. “Had we known that individual had a firearm, we would have cleared the lot and backed off.”

The two officers stood at the van’s rear passenger door, attempting to identify Chatman and talk him out of the vehicle during those 15 minutes. Chatman told officers his name is “Junior,” according to the video.

“All I want to know is who you are,” one of the officers can be heard telling Chatman in the video.

Chatman challenged the officers’ jurisdiction several times and asked the police officers to contact their superiors. This back and forth persisted until Parsons arrived with a pepper-ball gun. The sergeant, Tuell said, told Chatman what the pepper-ball gun was, what he would do with it and when he would use it.

“(If) you step out here, you go in handcuffs; you can give her a kiss,” a Gang Unit officer tells Chatman. “We can do this the hard way, or we can do it that way. That’s it.”

Less than 10 seconds after the first pepper ball was fired, Chatman began shooting his gun, police said. The officers returned fire and sought cover. An officer pulled the sergeant to cover after he was wounded.

The sergeant “continued to command the scene after he was shot,” Tuell said. “I can tell you I don’t know a whole lot of people with that work ethic.”

Backing officers surrounded the minivan, and emergency responders began treating Chatman for his gunshot wound after he got out of the van.

Chatman remains hospitalized, but a warrant has been issued for his arrest.

Police have not released the full names of the officers involved. Tuell said the agency has adopted a new policy of waiting at least seven days to release the names of officers involved in shootings to give them time to inform family members and, sometimes, to temporarily relocate for safety reasons. He said officers often receive threats after being named in a shooting.

Parsons is on medical leave, while Bean and Cawiezell are on administrative leave while the investigation into the shooting continues.

Chatman has served time in prison for second-degree burglary and distribution of a controlled dangerous substance, records show.