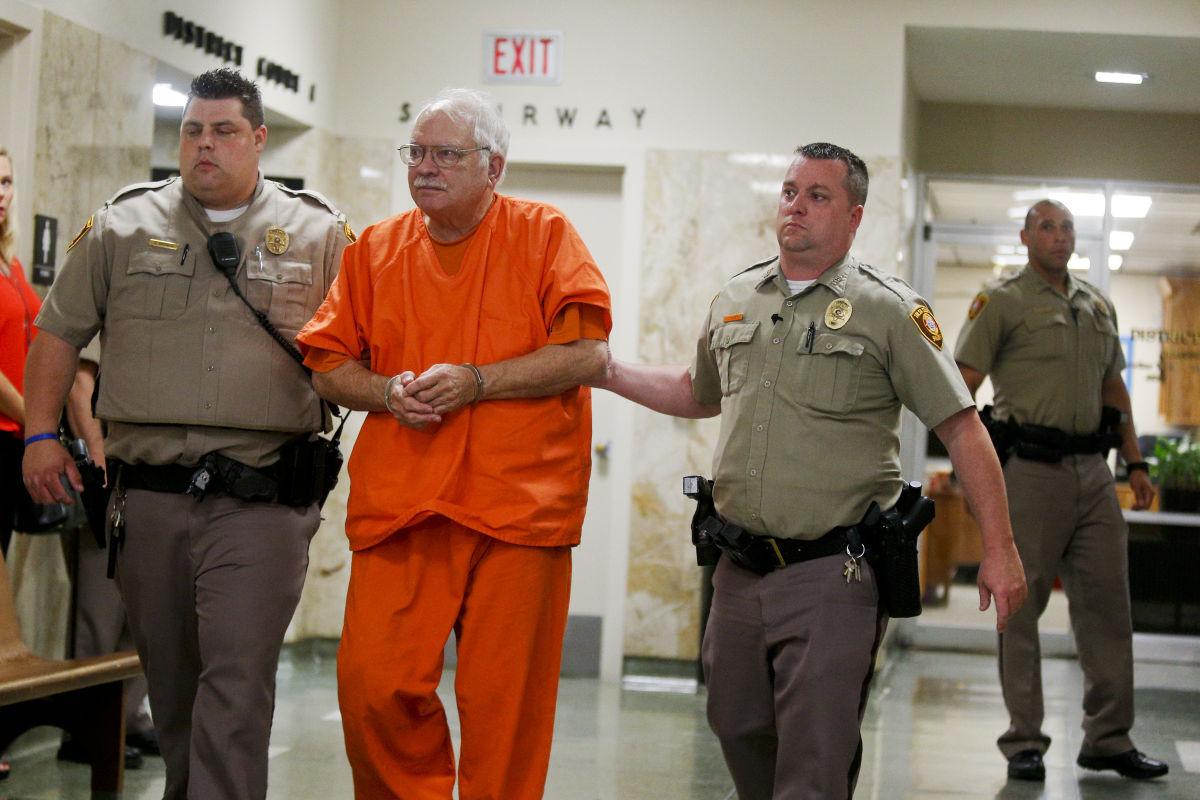 Ex-Tulsa County reserve deputy Robert Bates is taken back to jail from the Tulsa County Courthouse after being sentenced to four years in prison. IAN MAULE/Tulsa World file 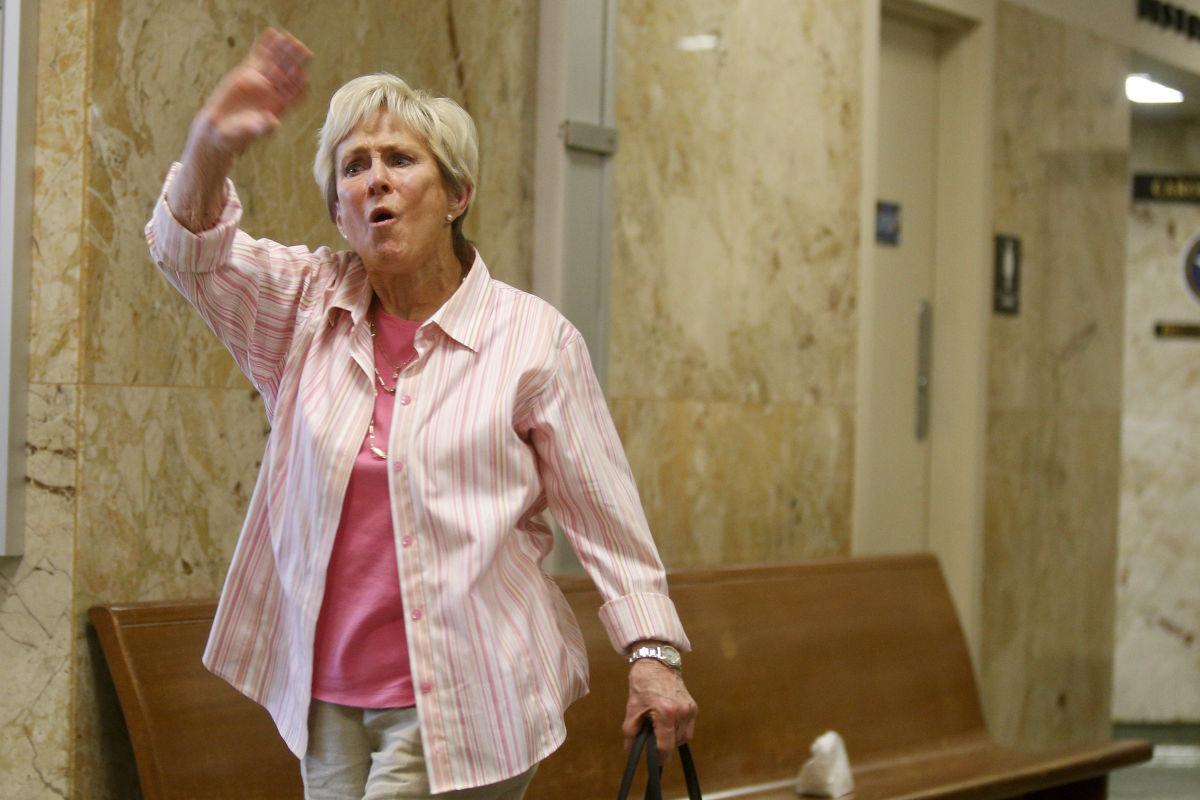 A supporter of former Tulsa County Reserve Deputy Robert Bates yells at reporters and photojournalists at the Tulsa County Courthouse on Tuesday after Bates was sentenced to four years in prison. IAN MAULE/Tulsa World 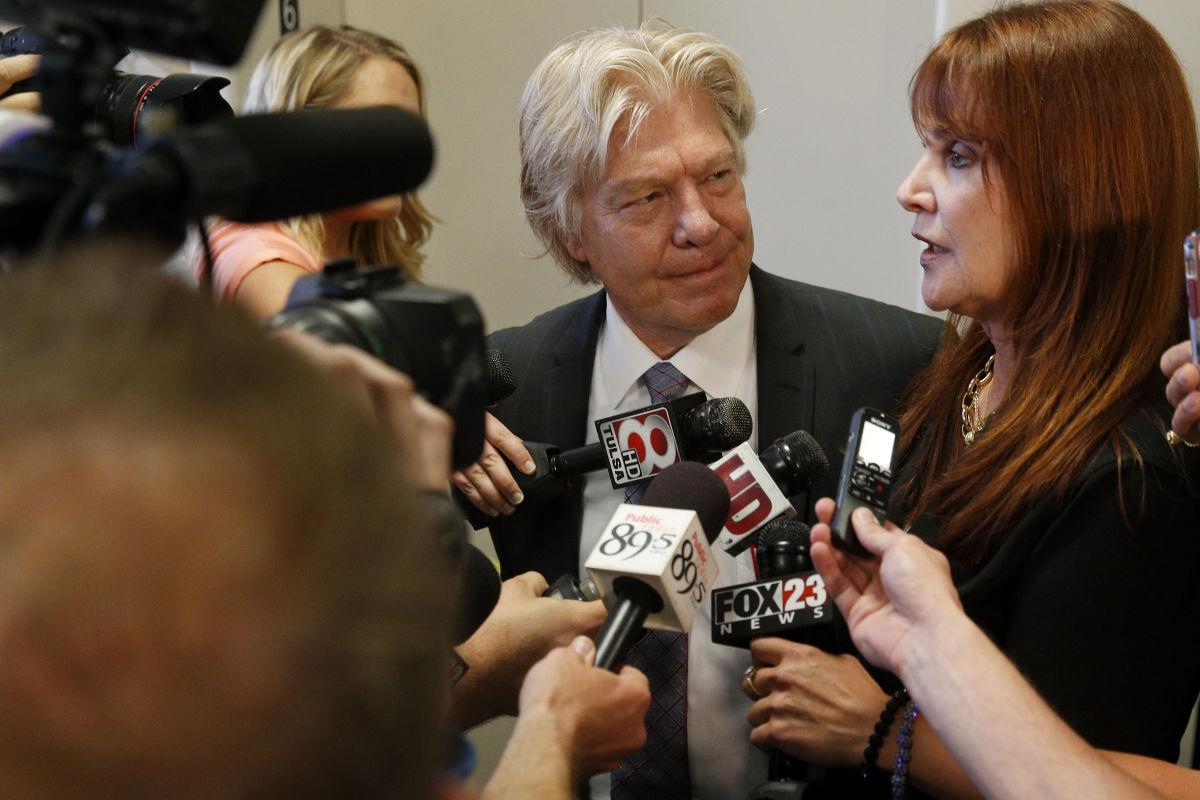 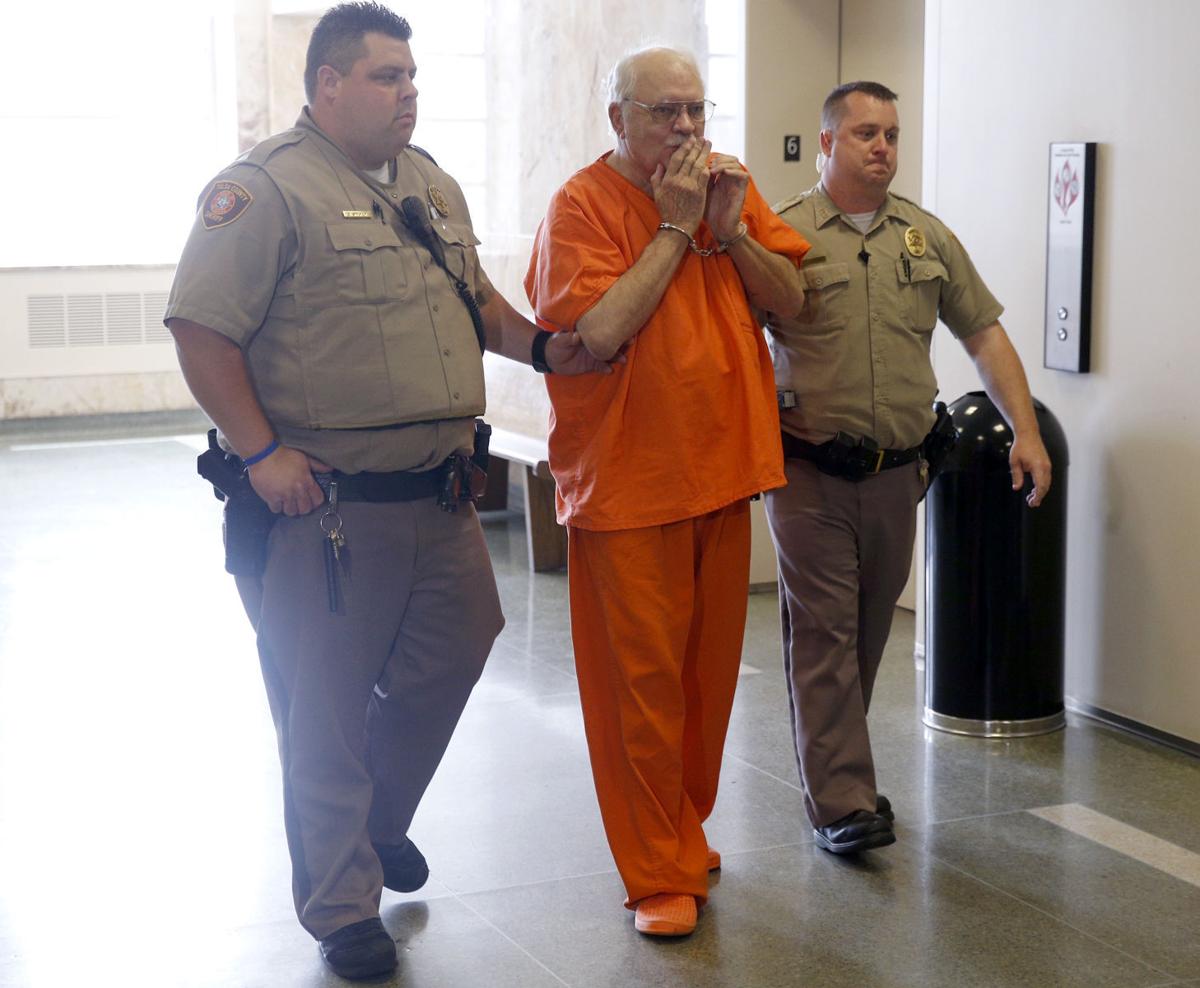 Escorted by Tulsa County sheriff’s deputies, Robert Bates greets his daughter and other family members by blowing a kiss as he is led into court for his sentencing hearing on Tuesday. IAN MAULE/Tulsa World 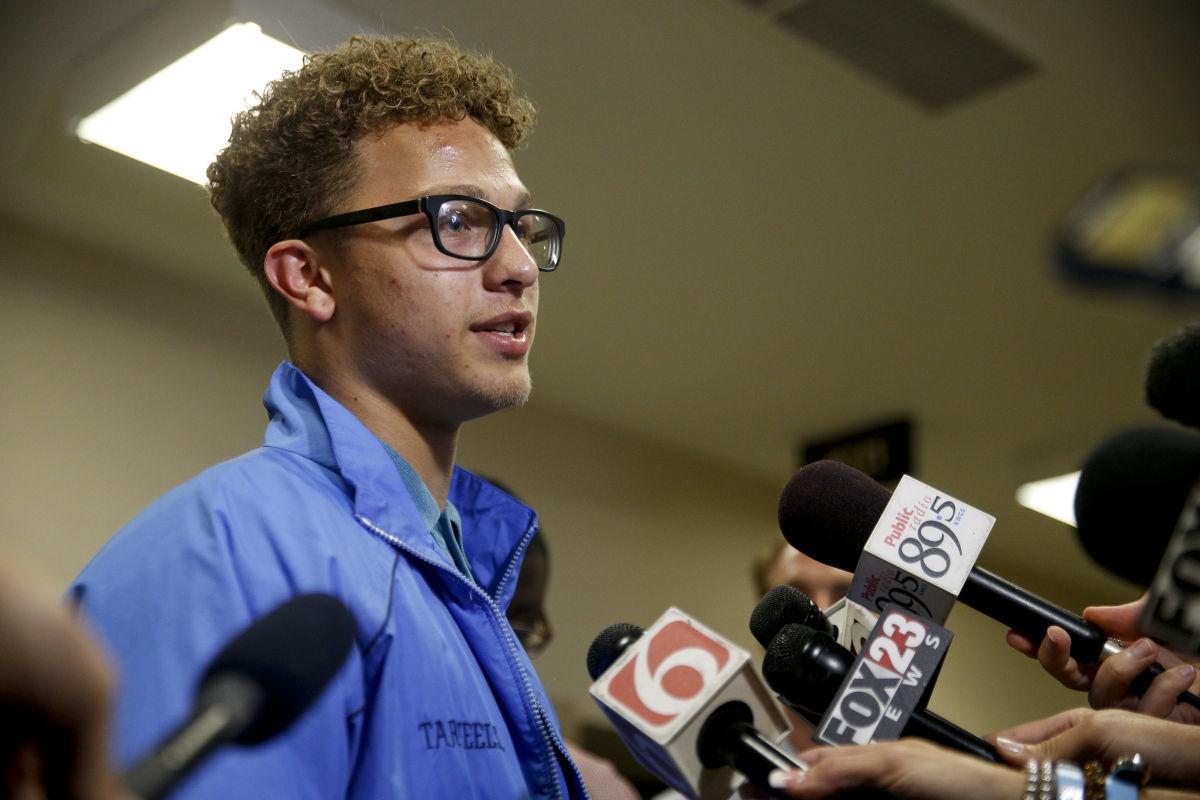 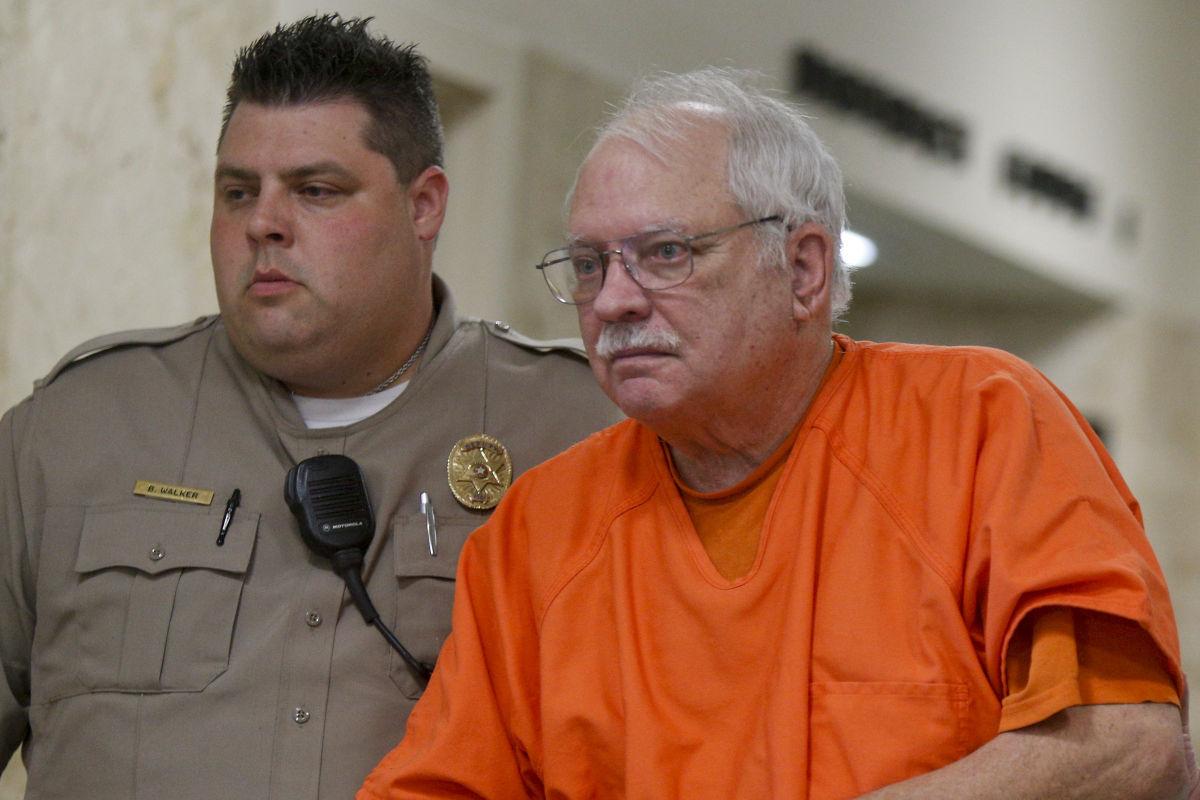 Former Reserve Deputy Robert Bates is led out of a courtroom on Tuesday after being sentenced to four years in prison for the death of Eric Harris. IAN MAULE/Tulsa World

Ex-Tulsa County reserve deputy Robert Bates is taken back to jail from the Tulsa County Courthouse after being sentenced to four years in prison. IAN MAULE/Tulsa World file

A supporter of former Tulsa County Reserve Deputy Robert Bates yells at reporters and photojournalists at the Tulsa County Courthouse on Tuesday after Bates was sentenced to four years in prison. IAN MAULE/Tulsa World

Escorted by Tulsa County sheriff’s deputies, Robert Bates greets his daughter and other family members by blowing a kiss as he is led into court for his sentencing hearing on Tuesday. IAN MAULE/Tulsa World

Former Reserve Deputy Robert Bates is led out of a courtroom on Tuesday after being sentenced to four years in prison for the death of Eric Harris. IAN MAULE/Tulsa World

At the conclusion of a nearly four-hour long hearing with testimony from nine witnesses and statements from Bates himself, District Judge William Musseman’s order drew reactionary cries from the packed courtroom.

The sentencing came about a month after a jury found 74-year-old Bates guilty of the charge, which asserts that he was culpably negligent in mistaking his gun for a Taser and fatally shooting 44-year-old Eric Harris, who was unarmed and the target of an undercover gun-sale operation, on April 2, 2015.

Musseman decided the punishment based not only on the jury’s recommendation but also a presentencing investigation conducted after the trial, in addition to statements made by family members and others in support of each side.

The prosecution called Eric Harris’ teenage son, as well as the boy’s mother, to testify about the difficulties the family has faced since Harris’ death.

Aidan Fraley testified that losing his father has “changed my life dramatically” and that it “broke my heart” when his father couldn’t attend his graduation.

“I’ll forgive Mr. Bates, but there are still consequences for your actions,” Fraley said.

“Four years to me doesn’t seem like anything when you compare it to a lifetime,” said Cathy Fraley, Aidan Fraley’s mother.

Bates’ attorney Clark Brewster gave the judge a dozen-page sentencing memo that he said includes 40 years of data indicating that probation is the standard sentence for a second-degree manslaughter conviction.

Musseman was reluctant to receive the report, calling the compiled data “misleading” and arguing that there are no other cases such as Bates’.

Musseman ultimately declined to review cases Brewster said involve similar circumstances, saying Oklahoma courts do not require a “proportionality review” in sentencing and that using the information would require a review of the facts of each case.

Musseman also denied a motion filed by the defense Friday asking for extra time to prepare a motion for a new trial. Musseman said the defense had failed to show sufficient cause to grant the request.

The first witness Bates’ attorneys called to testify was his longtime physician, Dr. Fred McNeer, who said four years in prison would equate to a “death sentence” for Bates because of his age and “multifaceted” medical needs.

McNeer testified that Bates has a heart condition, sleep apnea and severe arthritis, and he said his health has already begun to deteriorate since April 27, when he was jailed after being convicted.

On cross examination by Assistant District Attorney Kevin Gray, McNeer confirmed that he has no knowledge of the Oklahoma Department of Corrections’ ability to treat Bates’ medical conditions.

Musseman pointed out that after receiving a letter from McNeer on Friday, he requested a review from jail medical staff, who reported that they have met Bates’ medical needs.

The judge also heard testimony from Lance Ramsey and Joseph Byars, who testified at Bates’ trial about serving on the sheriff’s Drug Task Force operation that led to Harris’ death.

Ramsey and Byars confirmed to Brewster that Bates, after volunteering in approximately 100 Sheriff’s Office operations, had not exhibited aggressive or reckless behavior prior to shooting Harris.

Ramsey also confirmed to Brewster that Bates had not been “paying to play” a cop but was rather offering helpful service to the office as a reserve deputy.

Byars testified that Bates had been “thrust into a situation largely beyond his control” when he mistakenly shot Harris.

Brewster tried to elicit testimony from a private investigator who spoke with three Bates trial jurors about purported sentencing confusion. But the judge blocked the testimony from investigator Rodney Baker, saying he had questioned each juror himself on the four-year prison recommendation and that each one answered affirmatively.

Charlotte Bates, Robert Bates’ wife of 25 years, testified that her husband has been a “wonderful servant of this community.” She spoke of his generosity, facing the spectators as she said, “Everyone sitting in this courtroom has been touched by Bob Bates.”

“I’m begging you,” she said to the judge, growing tearful as she asked him to not send her husband to prison.

Bates also approached the judge before receiving his sentence. His statements were indistinguishable due to his voice’s soft, hoarse tone.

While acknowledging testimony about Bates’ good standing in the community and lack of criminal record, Gray said in his closing argument that the sentencing is about ensuring that mistakes have consequences.

In delivering his sentence, Musseman recalled trial evidence that Bates killed Harris “because he didn’t know what weapon he had in his hand.”

“(Bates) found himself in that position because of his own decisions,” Musseman told the court, citing testimony that Bates had requested to join the task force operation the night before.

Bates was a model citizen until he found himself in that position, Musseman said, adding that he has read hundreds of pages of letters detailing Bates’ service to the community.

After Musseman delivered the sentence, Charlotte Bates told reporters she was “devastated.”

“My husband is a wonderful pillar of this community,” Charlotte Bates said. “It was a tragic accident, which we are all scarred for life because this man died. And to put my husband in prison for four years — my husband will die — and I want all of you to know you’re part of the responsibility for that.”

Bates’ daughter also placed blame on the media, telling reporters as she hurriedly left the courtroom: “I hope you all feel good about yourselves.”

Bates will get credit for the approximate month he has served in the Tulsa Jail awaiting sentencing, Musseman ordered. Before he was convicted April 27, he had been out of custody on bond since his arrest.

Musseman denied the defense’s request for judicial review to consider a sentence modification for Bates after he spends a year in prison. Musseman said he may reconsider that review in light of certain changes, such as in Bates’ medical condition.

Brewster has said he intends to file a direct appeal.

After Robert Bates was sentenced Tuesday, defense attorney Clark Brewster told reporters he is confident that a higher court will grant an appeal for a reversal.

Brewster said he believes the judge didn't make the prosecution show during the trial that Bates departed from a standard of care, which he thinks will result in a reversal on appeal.

After the prosecution had rested its case at the trial, Brewster asked the judge to dismiss the charge for lack of cause. District Judge William Musseman ruled that the jury didn't need to hear expert testimony on law enforcement standards to decide whether Bates was culpably negligent when he shot Harris after mistaking his revolver for his Taser.

Assistant District Attorney Kevin Gray argued that the jury simply needs "common sense" to determine that it's not a good idea to "go around accidentally shooting people."

Brewster told reporters on Tuesday that the next step will be to obtain a new audience for the case, with a number of matters he will bring up on appeal in addition to the standard of care. Brewster also said he thinks the jury instructions were incomplete.

"The audience will be appellate judges that I think will see this case for what it was, which is Mr. Bates never had a chance to even debate the standard of care in this case," Brewster said.

"I've never seen a case like it, nor has there been one. All of the cases involving police operations require some testimony as to whether it was a departure from that standard of care.

"The judge did not hold the prosecution to that. And I really believe that it will result in a reversal."