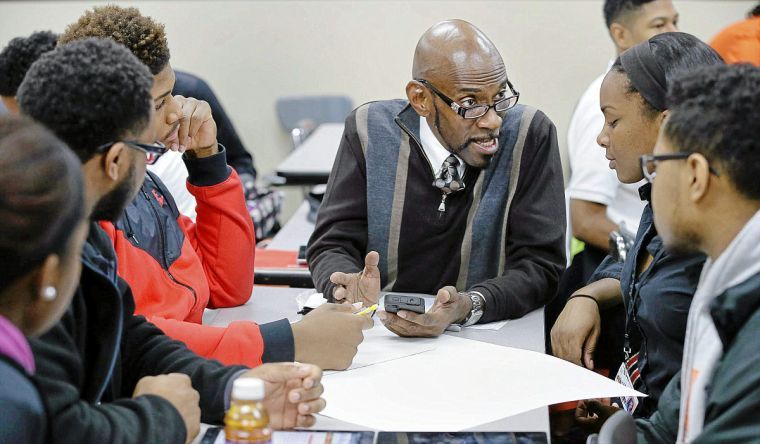 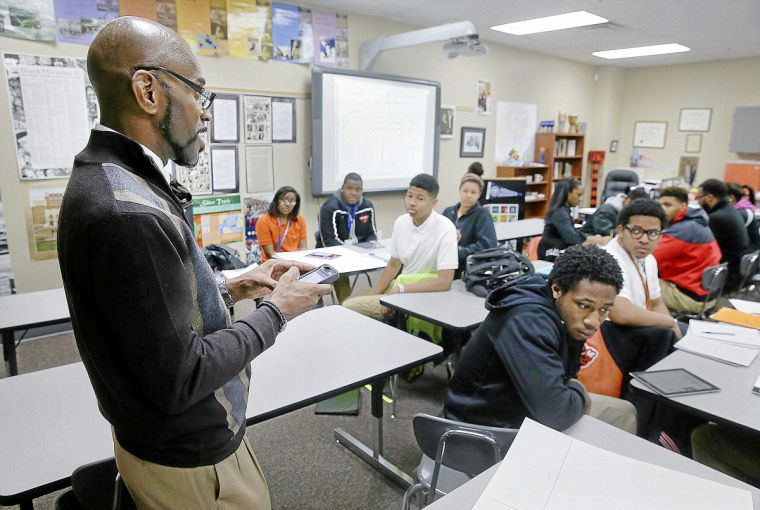 Dr. Anthony Marshall (left) reads a quote from his phone for his first hour students as they prepare for a debate in his African American history class at Booker T. Washington high school in Tulsa, OK, Feb. 23, 2015. MICHAEL WYKE/Tulsa World 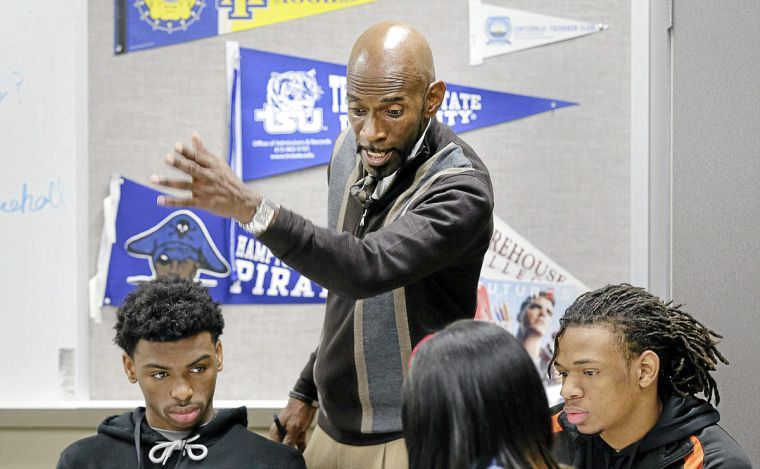 Dr. Anthony Marshall (left) reads a quote from his phone for his first hour students as they prepare for a debate in his African American history class at Booker T. Washington high school in Tulsa, OK, Feb. 23, 2015. MICHAEL WYKE/Tulsa World

“With whom do you agree?” the assignment on the classroom white board reads. “Who had the best plan for equality?”

Marshall, a teacher at Booker T. Washington High School, said he wanted his students to look into the two activists’ backgrounds to help them understand how they developed their philosophies. At the end of the assignment would come a debate, with students assigned to take either side.

The course covers subjects such as the civil rights movement and the Tulsa Race Riot, but it also takes a look at less known facets of black history in the U.S., including the contributions of African-Americans in every stage of the nation’s history.

Posters in Marshall’s class include the text of the Emancipation Proclamation and a list of African-American inventors and scientists.

Marshall, who organized several events at his school in February in honor of Black History Month, said he does not believe black history is being adequately taught in Oklahoma classrooms.

“If history were taught the way it should be taught, you would not need a separate class called black history,” he said.

Marshall said the fact that there is a need for his specific class shows that “there is a void in how we teach.”

Marshall said that when he began working at Booker T. in 2006, he and a few community activists worked to re-introduce a black history course in Tulsa Public Schools. The course is still an elective in the schools that offer it, and many schools throughout the area do not offer a course dedicated to black history.

He said so far, the teaching of black history has been pushed by individual “bold” teachers who seek to bring this perspective of history to their students.

Though he agrees that more attention could be given in history courses to black history, as well as Native American history and the history of other ethnic groups, he said today’s textbooks are better than they have been in the past in terms of inclusion.

Derkatch has taught history for more than 40 years.

“The way textbooks are written today, they’ve interwoven in a lot of black history,” he said.

Attention is given to the contributions of African-Americans in everything from the Spanish-American War to the Vietnam War.

But Derkatch still has to bring in outside material to supplement what is provided in the textbooks.

During Black History Month, he brings in the works of African-American authors. When the class is talking about economics, he includes the writings of the notable black economist Thomas Sowell. If it’s time for discussions about pre-colonial times, Derkatch brings in books about the contributions of black individuals.

Derkatch’s and Marshall’s goals are the same: To show students the lesser-known contributions from minority communities, specifically those of African-Americans.

Cori Williams, a senior in one of Marshall’s classes, said the course has opened her eyes to aspects of history she’d never known before.

For example, she knew about the slave trade and that slaves were brought the America on crowded ships. She just never knew the extent of the ill treatment of them on those ships, nor exactly how packed they were.

“I think the black perspective is really important because we’re a part of this nation as well,” she said.

For senior Darian Walters, the class is interesting because it is not focused on the traditional aspects of black history, such as slavery and the civil rights movement.

“This is like, black people have played a part in everything in America,” he said.

Derkatch says he makes an effort to make all groups of students in his class feel included historically, whether its his African-American, Native American or Hmong students.

“They get a sense of belonging and pride when they feel included,” he said.

Though she felt that not all students were exposed to the subject properly in high school, she said schools are doing better now than in the past.

She’s said workshops have been conducted at TPS on how to teach a variety of topics, including black history.

Harris also said Oklahoma’s academic standards — which the state has reverted to after Common Core was repealed last year — include the teaching of the Tulsa Race Riot, which in the past had not been taught by all schools.

She said textbooks now are more diverse and inclusive.

But both Derkatch and Marshall say more can be done.

Derkatch said one of the problems with survey classes is that there is too much material to cover and not enough time to cover it. That is why it is difficult to include so many perspectives or contributions of all ethnic and racial groups in a single course, he said.

Marshall said it is important for all students to be able to learn about American history from an African-American perspective.

“Race is one of the biggest issues in our country,” he said.

The bill did not become law, with opponents saying schools already taught students about the riot.

These are the same standards Oklahoma is currently using, after the repeal of Common Core last summer.