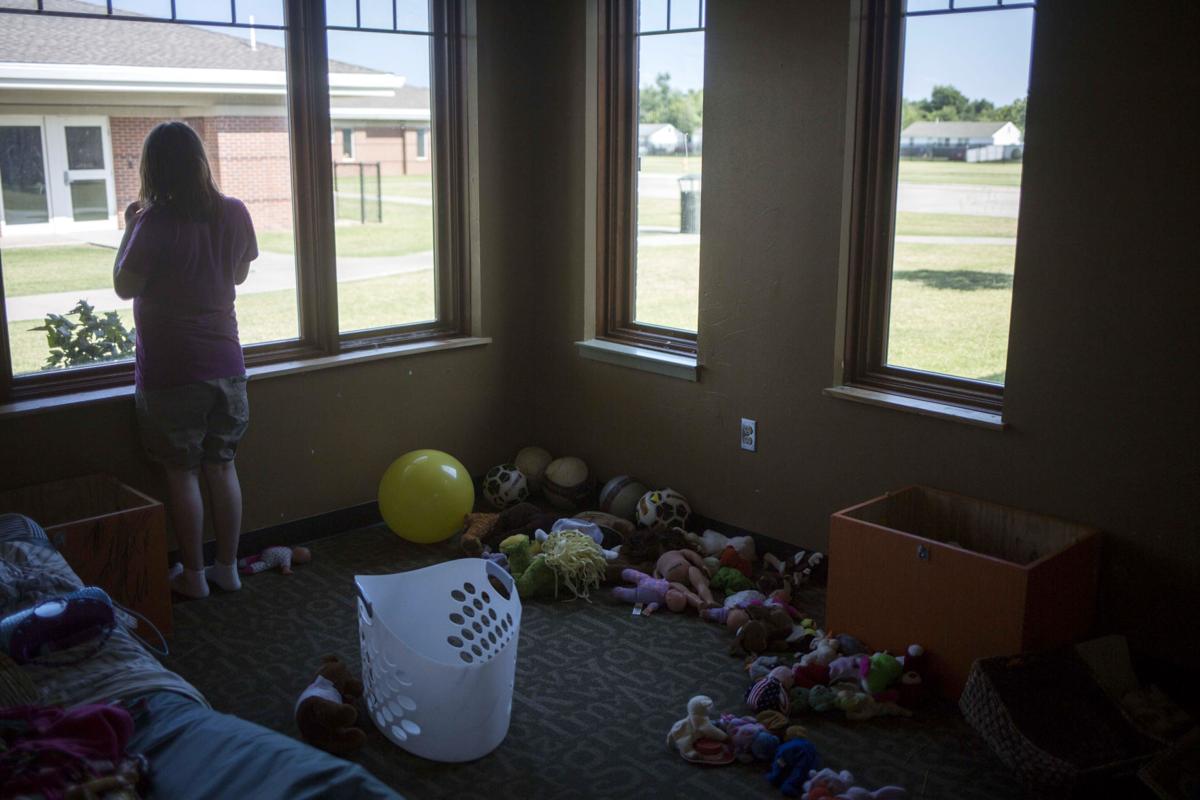 A girl who came to the Laura Dester shelter in 2016 looks out a window at the center last summer. Tulsa World file 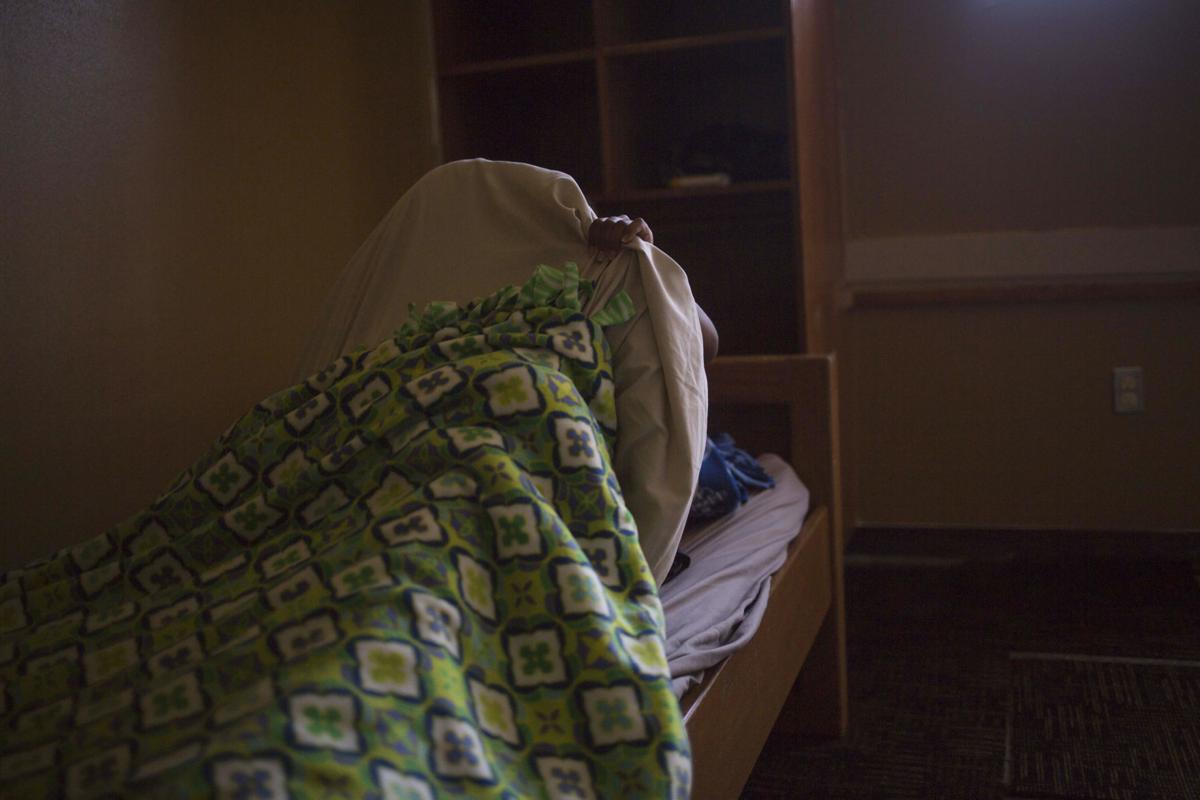 A young boy hides under his covers in his room at the Laura Dester shelter last summer. Tulsa World file 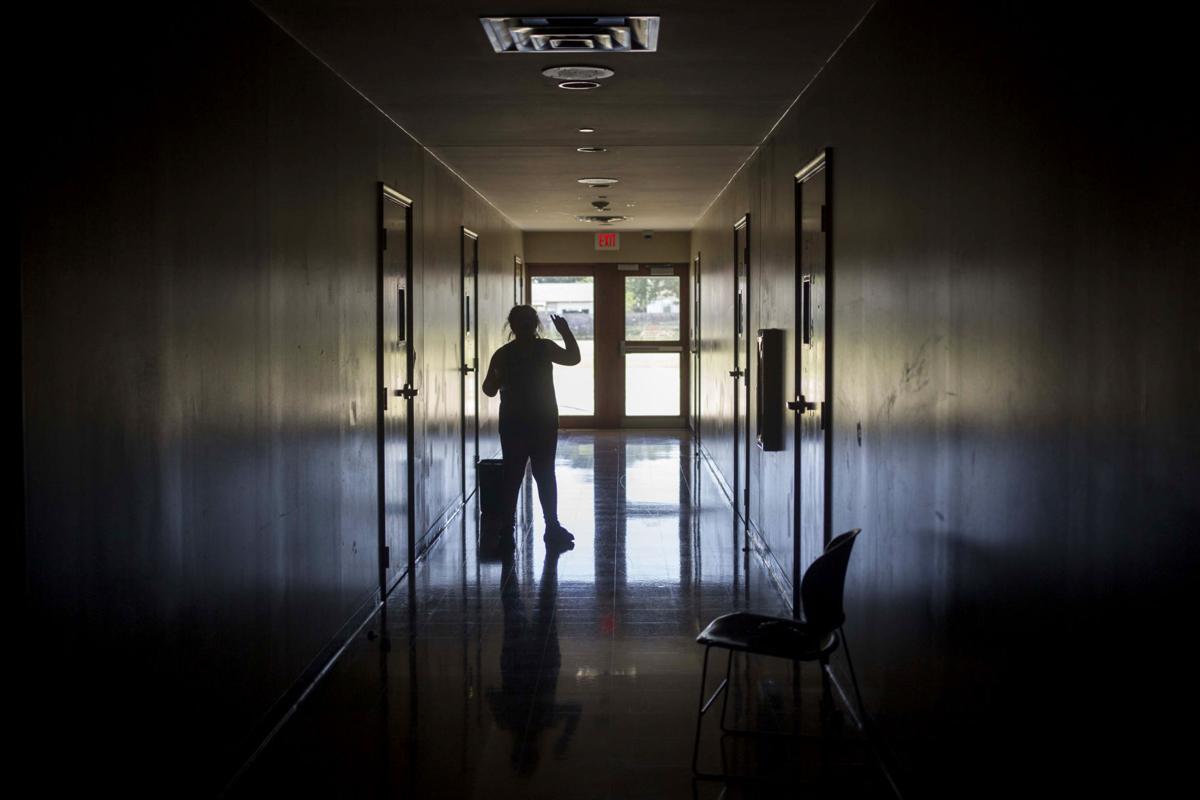 A girl stands in the hallway inside a cottage at Laura Dester Shelter in Tulsa last June. Tulsa World file 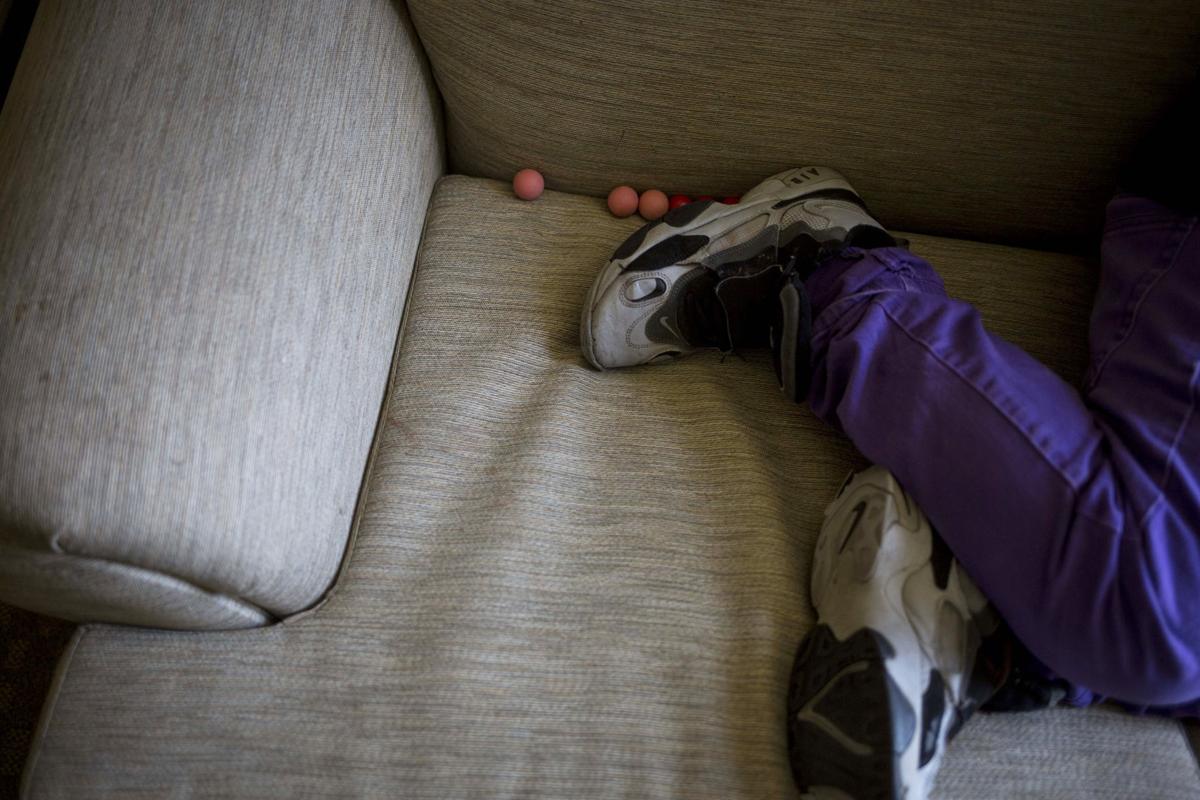 A boy rests on a couch in an intake room inside Laura Dester Shelter in Tulsa last June. Tulsa World file 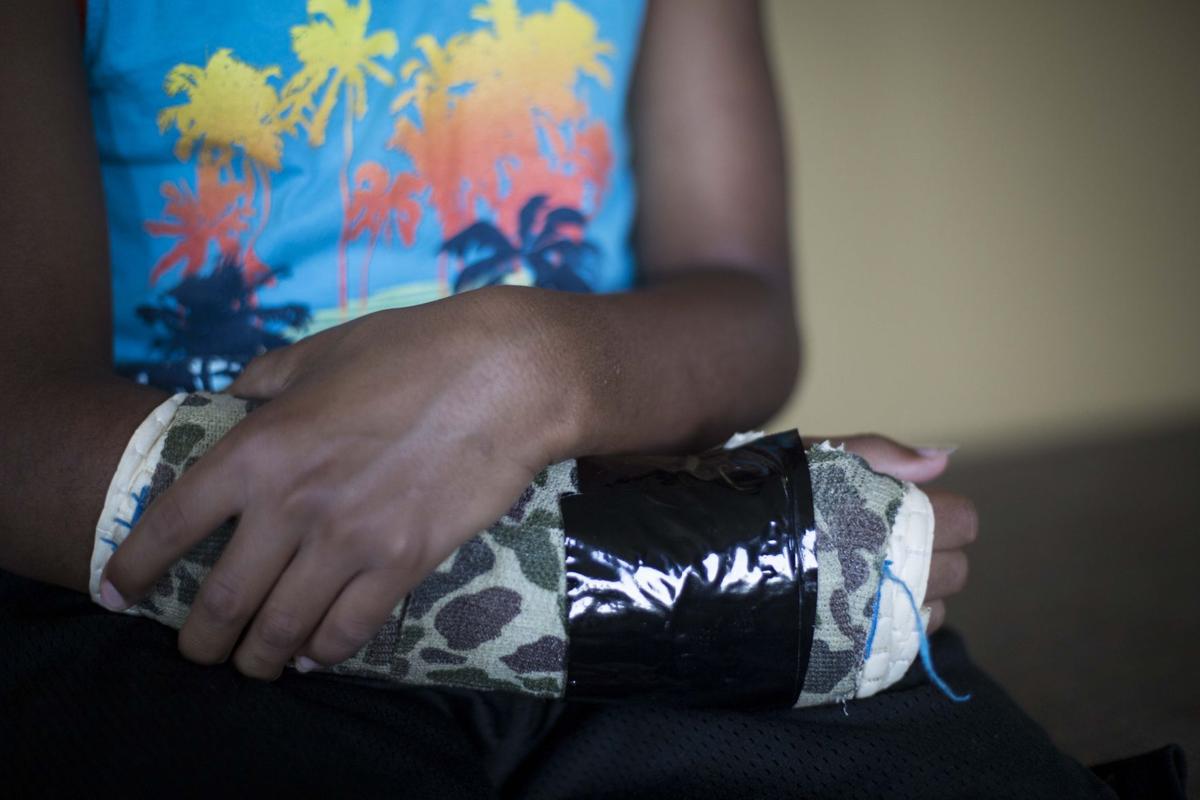 A young boy sits inside the Laura Dester Shelter after arriving with his siblings last summer. “They have fun places here and Xbox,” he said, “This place is happy.” Tulsa World file

A girl who came to the Laura Dester shelter in 2016 looks out a window at the center last summer. Tulsa World file

A young boy hides under his covers in his room at the Laura Dester shelter last summer. Tulsa World file

A girl stands in the hallway inside a cottage at Laura Dester Shelter in Tulsa last June. Tulsa World file

A boy rests on a couch in an intake room inside Laura Dester Shelter in Tulsa last June. Tulsa World file

A young boy sits inside the Laura Dester Shelter after arriving with his siblings last summer. “They have fun places here and Xbox,” he said, “This place is happy.” Tulsa World file

Since the announcement, the population at the shelter for abused and neglected children has drastically changed, from cottages filled with kids of all ages to a smaller and older group struggling with developmental, medical and behavioral needs.

Two issues face the Oklahoma Department of Human Services with the closure of the shelter: finding specialized care and placement for these children and securing a community agreement on the next use for the 20-acre campus.

With the children and teens at the shelter, at least half come from other counties and about 70 percent have developmental or high-level medical needs — or both. Mental health also plays a role for some youths.

It’s as much a health-care issue as a social service one.

“We wish we had been able to close our shelter operations by now,” DHS Director Ed Lake said. “My goal was to get the department out of the business of running shelters and group homes. Situation-by-situation we’ve been able to do that, but we haven’t been able to at Laura Dester.

“We still have children with needs who need placements. We need better resources to meet those needs. Until we can get a placement system in better balance, we still have a core number of kids who need this service.”

Several steps are being taken to find permanent, specialized homes for the children and teens.

“Unless and until we do, we’ll soldier on,” Lake said.

“Our timeframe is as soon as possible, but we won’t close Laura Dester just to close it.”

All shelter placement, even if for a one-night emergency stay, must be approved by the child welfare division director. Lake said it may be some time before Oklahoma has enough foster and group homes to meet the need.

“It is unlikely in the short run that Oklahoma can divest itself of all shelter use while we are dramatically decreasing usage across the state,” he said. “There will still be a need here and there for a shelter. But we don’t need a shelter of that size in Tulsa.”

‘Far off the bubble’

Tulsa rallied around the construction with a citywide endowment campaign led by the Tulsa Advocates for the Protection of Children, which continues to support foster child programs.

Then, DHS settled a class-action federal lawsuit in 2011 that had alleged abuses of children in foster care. The settlement agreement was an ambitious five-year improvement plan, called the Pinnacle Plan, overseen by a three-member monitoring panel.

“It’s been over a year since we’ve had an infant placed in a shelter. That is huge for us,” said Jamie Ledoux, director of the DHS child welfare division.

“And we’ve virtually eliminated shelter care for children under age 6.”

Lake inherited the Pinnacle Plan after being hired to lead the agency in October 2012. Among his first observations were a significant lack of group home options and a serious deficiency in traditional foster homes.

“We had very little foster-care resources, and it was a chaotic environment in our offices,” Lake said. “And, at one point, there was a high of 84 kids in Laura Dester. Now we are down to a totally different population a fourth of that size. We’re not where we want to be, but we’ll get there.”

DHS and the attorneys representing the original plaintiffs in the lawsuit asked in September for an extension of the Pinnacle Plan deadline. Oversight and progress reports will continue indefinitely until the goals are met.

As the state has experienced significant revenue losses — a $1.3 billion shortfall last year and an expected $878 million this year — DHS has protected the child welfare division. That means cuts to the agency came from other programs.

The state has invested $109 million specifically for the Pinnacle Plan, and DHS has put in $113 million recouped from other agency divisions.

“That tells me how far off the bubble things had gotten,” Lake said. “When you are in the pits, that’s the kind of resources needed to climb out. We try to do the best with the budget we have, but it has had an effect in disability and other areas, which are running on tight margins. We can’t work around this anymore.”

As of Tuesday, the Laura Dester shelter had 26 children on its roster. However, three were off campus at an in-patient treatment program, and two left the next day for placements.

Of the total, 21 are teenagers. The youngest were 7 and 8 years old. Often, younger children are part of a sibling family.

The shelter’s lowest number in the past two years has been 12, but it hovers between 20 and 22 children and teens. A handful have a goal for reunification with family, but most are needing permanent placements.

DHS officials say the experience of having a hard-to-place population has strengthened the system.

“It has helped us narrow down and very clearly identify our placement gaps,” Ledoux said. “Our ultimate goal is that every child should be with a family. With these gaps in our system, we realize what is keeping us from that ultimate goal.”

DHS has been working with its developmental disability services division and Oklahoma City-based J.D. McCarty Center for Children With Developmental Disabilities on some models. Health providers are training staff to care for the children and youths, and DHS has contracted for specialized foster recruitment.

“It takes someone who truly understands what the needs of these children are, and we are talking to families about how to care for the kids,” Ledoux said. “This is an individual training plan for caring for these children. We are learning a lot about these kids.”

Future of the facility

No legitimate offers have been made on using or repurposing the campus.

It cost DHS $4.8 million last year to operate Laura Dester, including staffing, utilities, maintenance and bond payments. Just the bond payments, including principal and interest, was $660,293.

The final bond payment is set for February 2023.

“It’s an expensive proposition for the agency, but it’s about the children and meeting their needs,” Lake said. “We just don’t want to be driven by cost issues, but, albeit, those are significant. It would be nice to not be spending money on the facility and spend it instead on children’s needs.”

The agency started last year to solicit ideas for repurposing Laura Dester, and it held tours for prospective tenants in the summer.

“We didn’t get anything solid there,” Lake said. “Ideas are floating around, and we are still open to it. We do not want to replicate a shelter. We are still open to repurposing or redesigning it to meet the needs of children and their families in the community.”