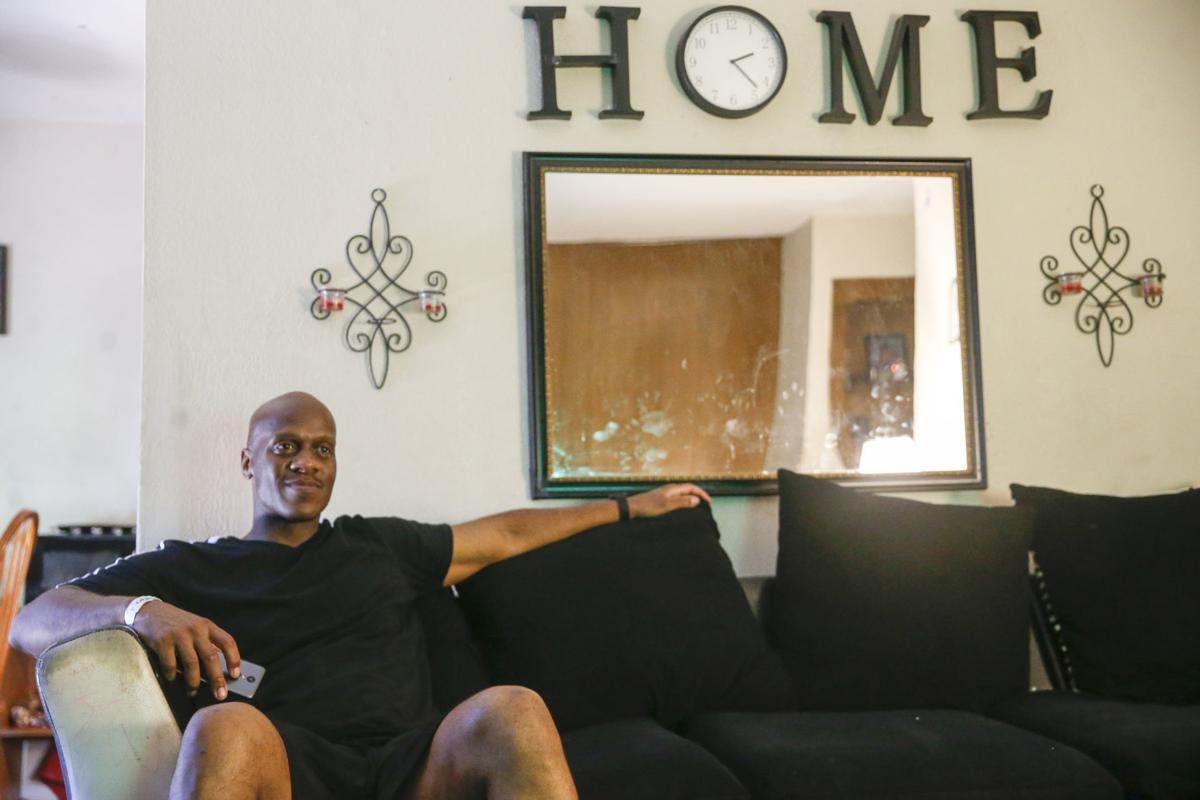 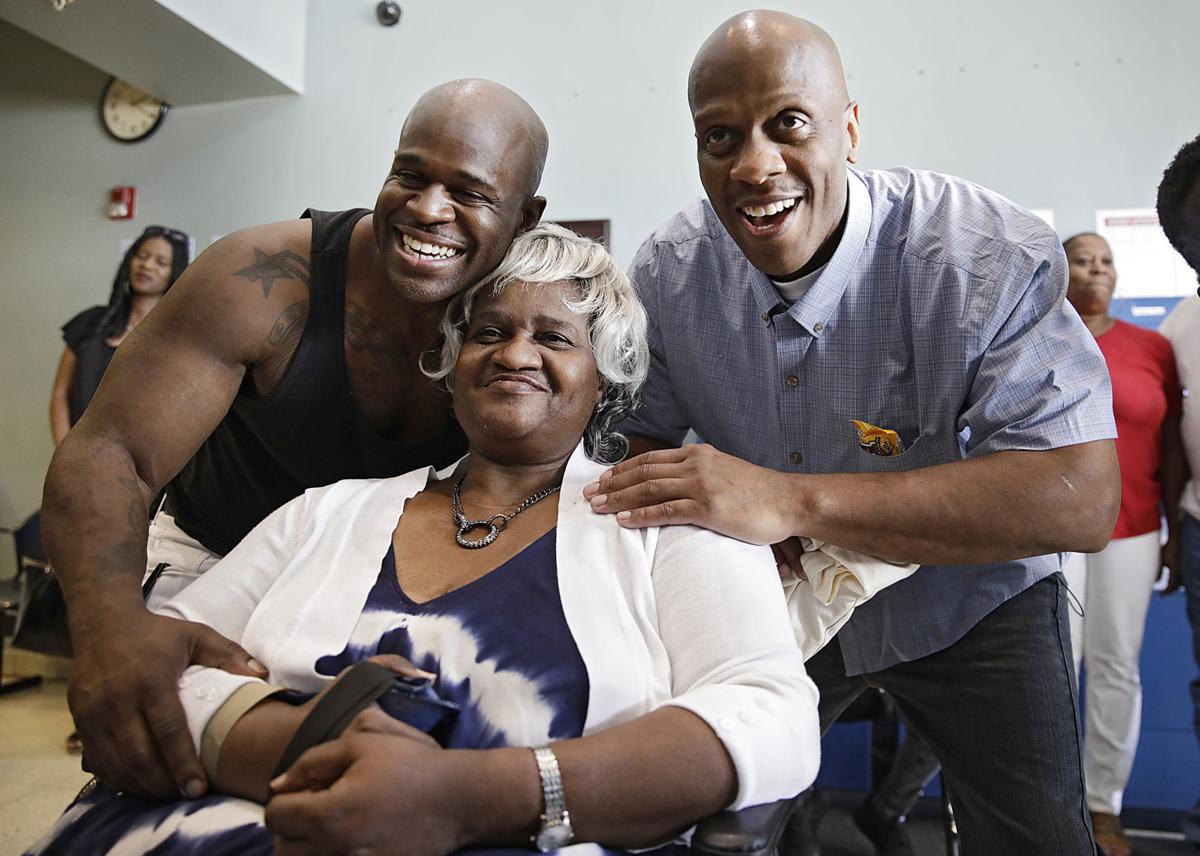 Malcolm Scott (left) and Corey Atchison celebrate with their mother, Ruthella Scott, at the Tulsa County jail in 2019 after Atchison was freed from prison by District Judge Sharon Holmes, who declared him innocent of a 1991 murder for which he served 28 years in prison. MIKE SIMONS/Tulsa World 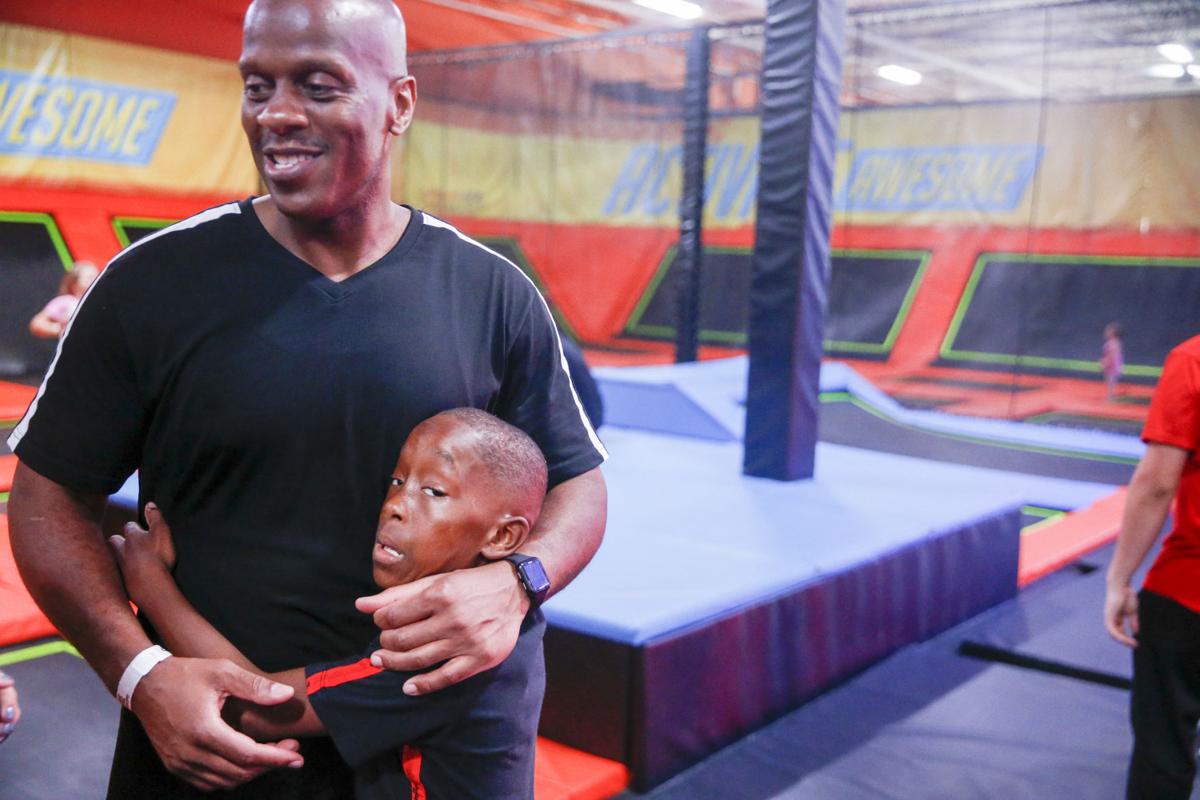 Corey Atchison hugs his grandson, Phillip Thomas, 10, while they play at Urban Air on Friday. 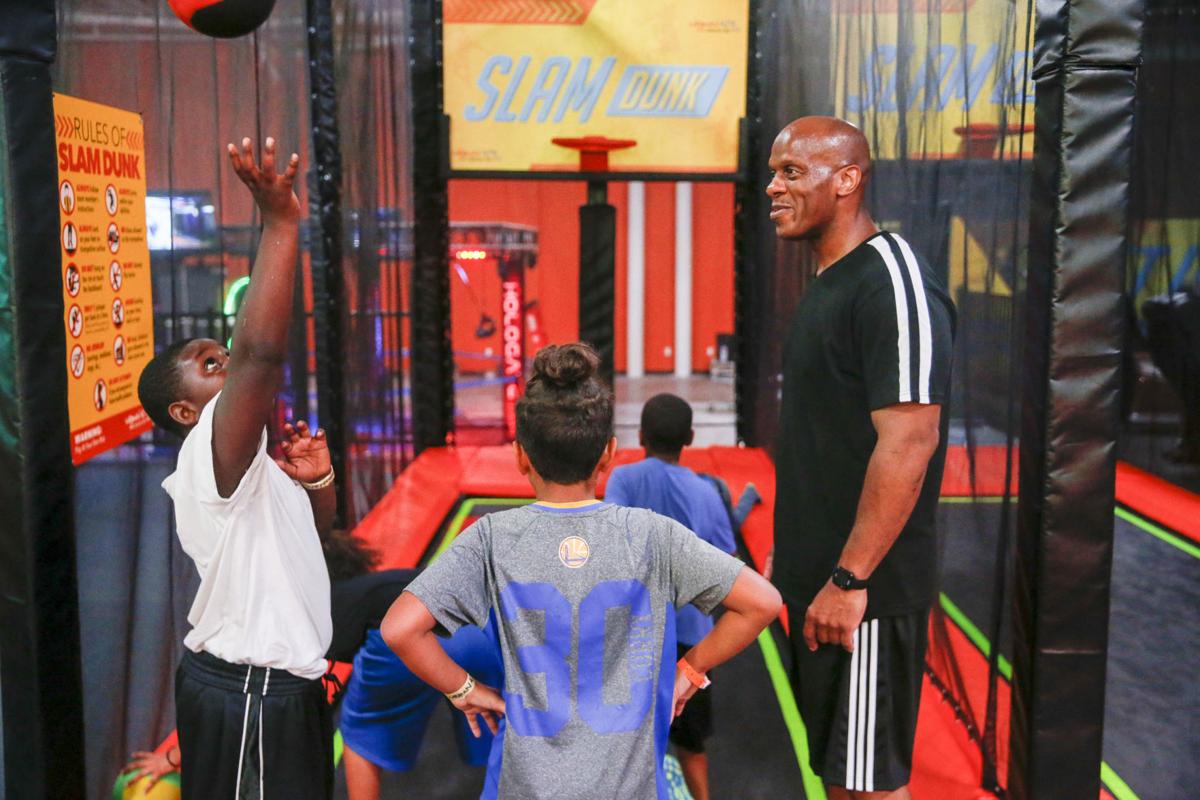 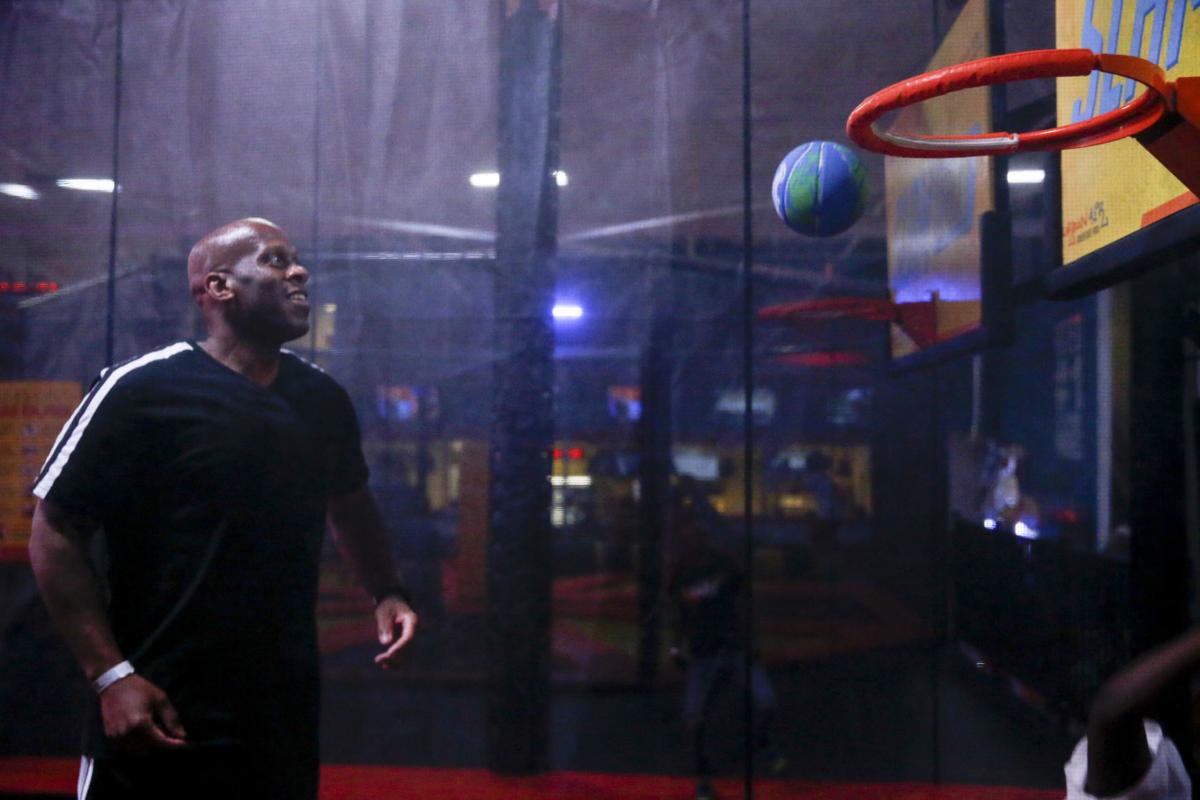 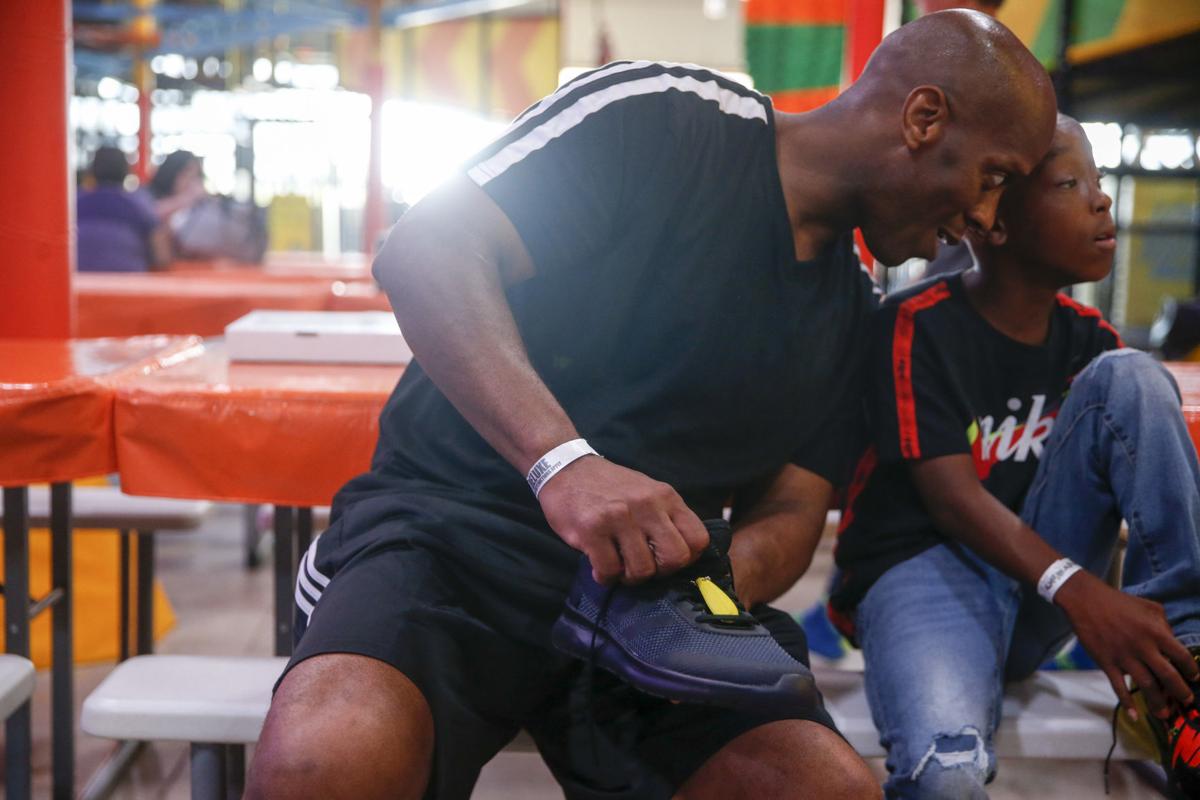 Corey Atchison talks to his grandson, Phillip Thomas, 10, both of Tulsa, as they put they their shoes on at Urban Air on Friday, July 19, 2019. IAN MAULE/Tulsa World 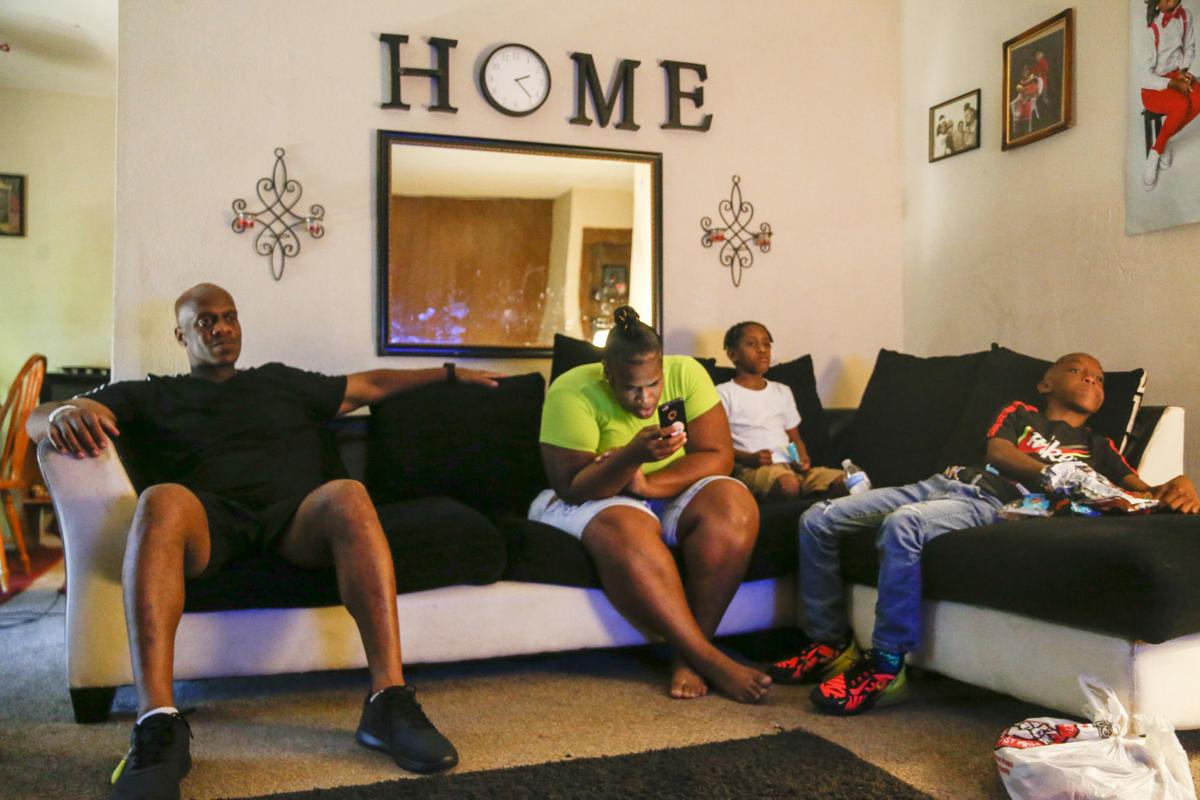 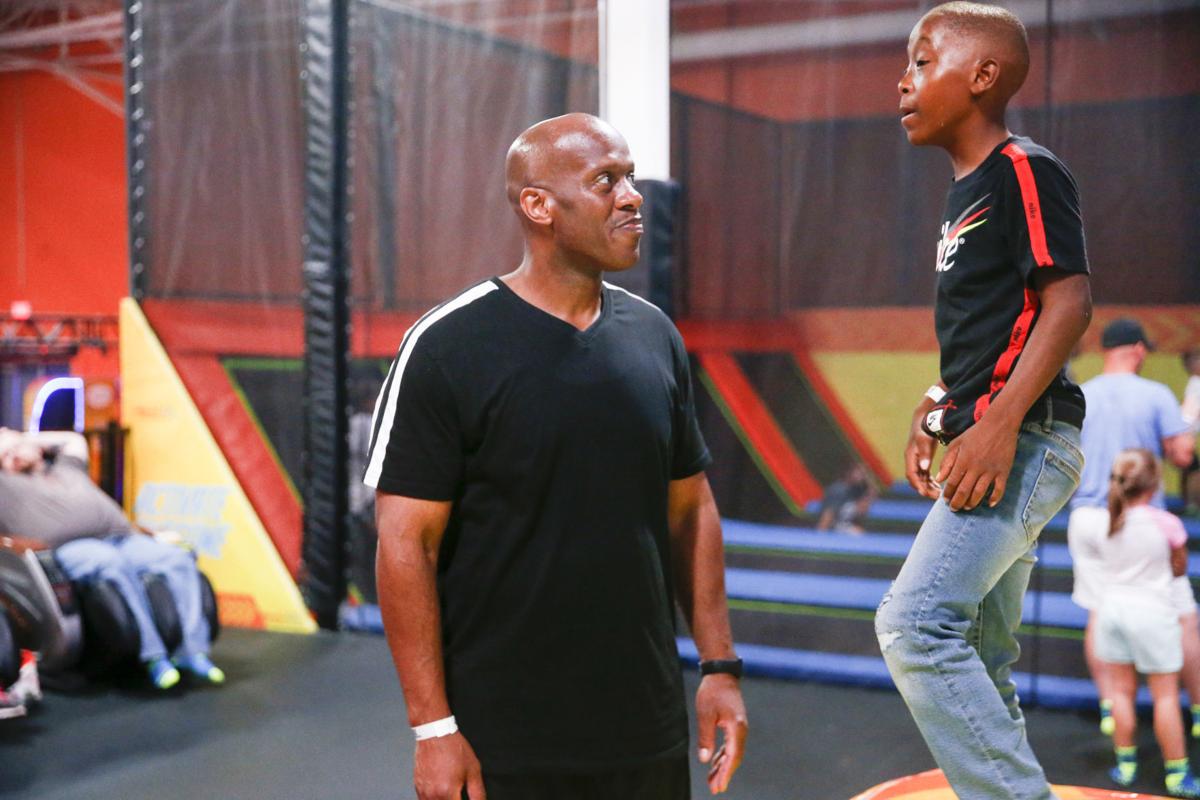 Corey Atchison talks his grandson, Phillip Thomas, 10, both of Tulsa, while they play at Urban Air on Friday, July 19, 2019. IAN MAULE/Tulsa World 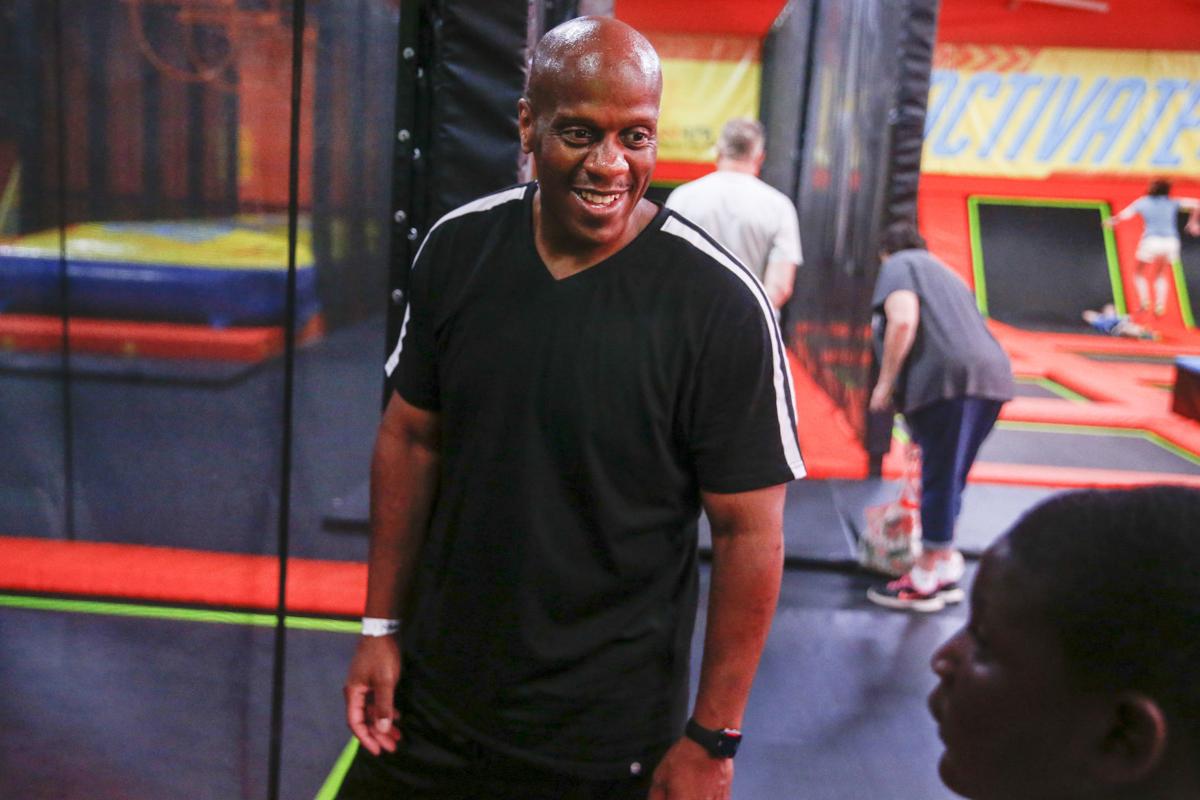 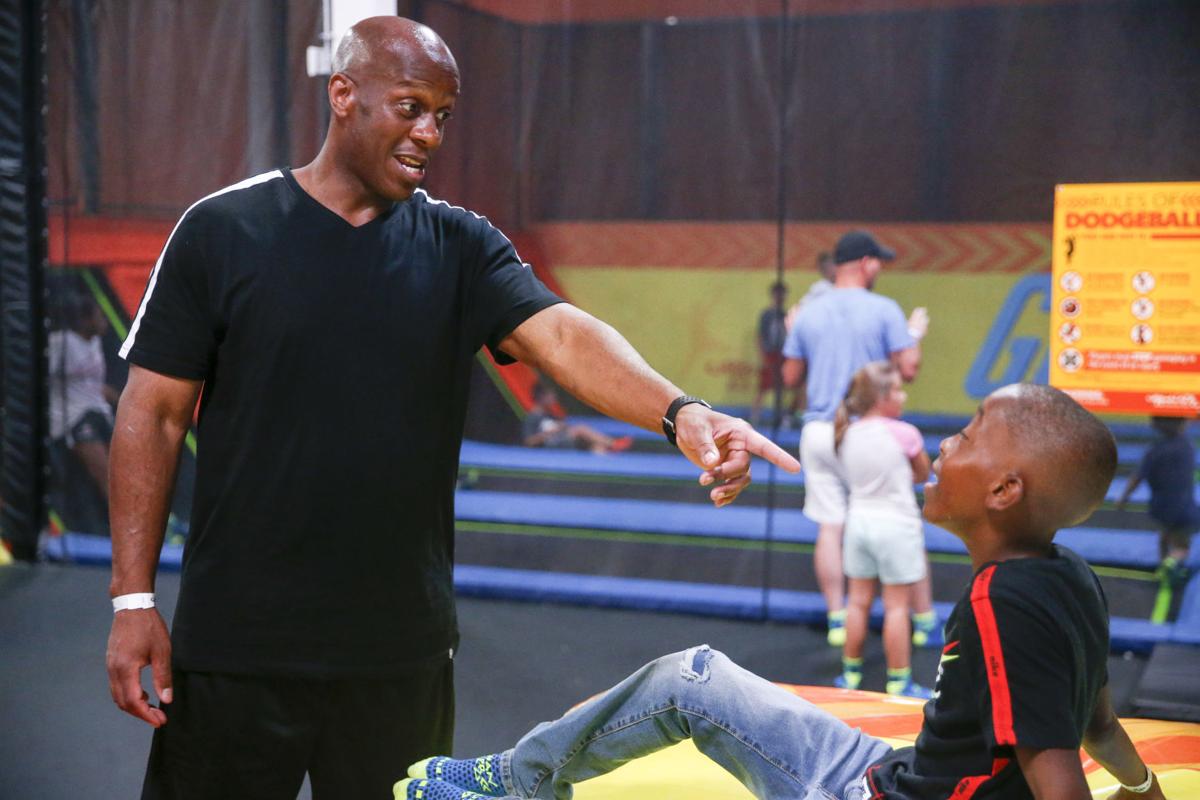 Corey Atchison talks to his grandson, Phillip Thomas, 10, both of Tulsa, while they play at Urban Air on Friday. Atchison was freed from prison Tuesday after serving 28 years for a wrongful conviction of murder. IAN MAULE/Tulsa World

Malcolm Scott (left) and Corey Atchison celebrate with their mother, Ruthella Scott, at the Tulsa County jail in 2019 after Atchison was freed from prison by District Judge Sharon Holmes, who declared him innocent of a 1991 murder for which he served 28 years in prison. MIKE SIMONS/Tulsa World

Corey Atchison hugs his grandson, Phillip Thomas, 10, while they play at Urban Air on Friday.

Corey Atchison talks to his grandson, Phillip Thomas, 10, both of Tulsa, as they put they their shoes on at Urban Air on Friday, July 19, 2019. IAN MAULE/Tulsa World

Corey Atchison talks his grandson, Phillip Thomas, 10, both of Tulsa, while they play at Urban Air on Friday, July 19, 2019. IAN MAULE/Tulsa World

Corey Atchison talks to his grandson, Phillip Thomas, 10, both of Tulsa, while they play at Urban Air on Friday. Atchison was freed from prison Tuesday after serving 28 years for a wrongful conviction of murder. IAN MAULE/Tulsa World

Corey Atchison and attorneys react after he was released from custody, where he spent 28 years serving time on a wrongful murder conviction

Read the story: Man set free after 28 years in prison for crime he didn't commit now adjusts to life outside

Corey Atchison’s first night of freedom in nearly 30 years ended with a two-hour nap at the Hard Rock Hotel and Casino Tulsa. He got about three hours of sleep the next night, following that up with about four hours on Thursday.

This weekend, he hopes to get six hours — the amount of time he typically slept during his 28 years of incarceration for a wrongful conviction for a murder — in what is one of his first steps of adjusting to a life free from the myriad rules associated with prison.

“I would probably go to sleep around 12 and then get back up at 6 in the morning, probably work out, take a shower and get ready go to work in the kitchen,” Atchison said Friday while watching his 10-year-old grandson play at the Urban Air Trampoline and Adventure Park in Tulsa. “I worked all day in the kitchen so I could just not think about being locked up so much.

“I know I need to enjoy (my freedom), but I want a job. I want my own money, a job, my own place, you know, to do my own thing. And I want it so fast. That’s the hard part for me. I know it’s gonna come, but being patient, that’s the hard part.”

On Tuesday, Tulsa County District Judge Sharon Holmes vacated Atchison’s 1991 first-degree murder conviction and declared him actually innocent in the fatal shooting of James Lane on Aug. 3, 1990, near Fourth Place and Atlanta Avenue. Saying a “fundamental miscarriage of justice” occurred, she said she believes that at least some of the witnesses who testified during Atchison’s jury trial — many of whom were teenagers — were coerced to incriminate him.

Additionally, Holmes said she was concerned about Atchison’s trial lawyer’s not having had timely access to evidence, such as witnesses identifying another person as Lane’s killer, that would have helped his defense.

Holmes also made a finding of actual innocence in 2016 for Atchison’s younger brother, Malcolm Scott, and De’Marchoe Carpenter in an unrelated 1995 murder case during which their attorneys made similar claims of misconduct.

Though Atchison said he never doubted their innocence, he said of Scott, “I didn’t want him to go through the same things that I went through. Even at first when he caught the case, I felt like it was my fault.”

Former Tulsa County District Attorney Tim Harris, who was an assistant prosecutor when he took Atchison’s case to trial, denied allegations of threats and coercion that a key witness leveled against him in a 2017 affidavit.

“You can go through something in life and get knocked down. Don’t stay down. Don’t give up,” Atchison said. “Get up and just keep going. If you just get up, something good is bound to happen.

“I think of a song I liked a long time ago from Aaliyah: ‘If at first you don’t succeed, dust yourself off and try again.’ ”

Now Atchison’s concerns include things like spending time with his family, getting a new driver’s license, learning how to operate a smartphone — one of three phones he’s tried to use since being released — and starting a career in the culinary arts. He learned how to operate heavy equipment as a teenager in the Job Corps program, but he enjoyed working in the kitchen while in prison and wants to expand his skills.

“One time in prison the deputy warden asked me to cook him some sloppy joes for 50 people and some fries,” he said. “And I said, ‘Yeah, I’ll make it.’ He said, ‘What kind of candy bars do you like?’ I said ‘Snickers.’ So I made the stuff and everything and then put it in little to-go trays and put it on the cart, and somebody came and got it.

“And then later on the dude came and gave me, you know, one of the little paper sacks you get, brown paper sacks? He said, ‘Hey, man, this is from the deputy warden.’ And it was full of Snickers.”

He stopped eating red meat about five years ago, which he credits for his continued good physical health. Scott, his brother, is now a personal trainer in the Houston area and has said he wants Atchison to join him someday so he can open a health-oriented restaurant near the fitness studio where Scott works.

Despite being imprisoned for essentially the entirety of his daughter’s life, he said he chose to remain optimistic and used cooking as an outlet for expression.

“He kept my spirits up, and I knew what he went through,” said Eric Colbert, a friend of Atchison’s who shared a cell with him for more than a year. “He’s always been very uplifting. He comes from the right tree, you know?

“He used to talk about this day (leaving prison), actually. We used to lay there in our bunks late at night after working out or whatever, and I would tell him, ‘Man, you’re gonna be out there.’ I said, ‘We’re gonna be together.’ ”

When Colbert and Atchison last saw each other in prison, Atchison gave him a photo of himself, his daughter and a cousin taken at Dick Conner Correctional Center in Hominy. On Friday, Colbert arrived at the trampoline park with one of his children for a play date with Atchison’s grandson and told Atchison, “I got something for you.”

“He opened his wallet and said, ‘I kept this picture,’ ” Atchison said. “This is the only picture that he held on to.” The quality has deteriorated and the faces are nearly impossible to see, but Colbert said he didn’t want Atchison to lose the memory associated with the image.

“I knew that if he could have someone to listen to his story, he would be able to come home. All he needed was someone to hear his story,” Colbert said.

Defense attorney Joseph Norwood filed an application for post-conviction relief in 2017 and, with help from investigator Eric Cullen, presented testimony from eight witnesses — including Atchison — during two evidentiary hearings. Colbert said he told Cullen, who worked on the exoneration efforts for Scott and Carpenter, in 2016 that he should look into Atchison’s case.

Several witnesses during the hearings either told Holmes they saw someone other than Atchison shoot Lane or that their statements to police blaming Atchison for the homicide were false. Norwood said after Atchison’s release that it would be “hard for a judge to keep him in” custody because of a lack of physical evidence and witnesses’ inability to identify him as a suspect.

“What I remember about him is he was always smiling,” Linda Scott, one of Atchison’s sisters, said of Atchison’s attitude while imprisoned. “I’m like, ‘You’re smiling when you’re locked up in this place for a crime that you didn’t even commit or have nothing to do with. And you’re still smiling.’ And that just gave me hope.”

Atchison said other people in prison would tell him he didn’t act as though he had a life sentence to serve, to which he said, “How am I supposed to act? How is a man supposed to act when he’s convicted of something he didn’t do and he’s never been in this situation? Do you go to somebody and say, ‘Hey, man, how do I act?’ ”

By Friday evening, Atchison was at his sister Frances Scott’s house in east Tulsa, going over potential job opportunities with Linda Scott before going to Oklahoma City to visit with another of his more than 12 siblings.

“Not to be bragging on myself, because they say you’re not supposed to be bragging on yourself, but in the penitentiary, I was the man in the kitchen,” Atchison said at the trampoline studio. “But I know it’s a whole different thing out here. Earlier today Joe and his wife took us to some barbecue place and I ate some salmon. I ate some smoked salmon and some asparagus, and I had a side of macaroni and cheese.

“I was tasting this stuff and I was like, ‘I don’t know if I can cook this like this. This is pretty good, you know?’ I’d be nervous if I do get a job in a kitchen, because I don’t want it to be like I can’t do it.”

Colbert, for his part, said he believed that Atchison would be “doing really good” by next summer.

“He’s not a lazy guy. He’s never been like that,” he said. “He never gave up faith. This man, he was framed. And you can see this. I’m hoping his story changes things downtown at the courthouse.”